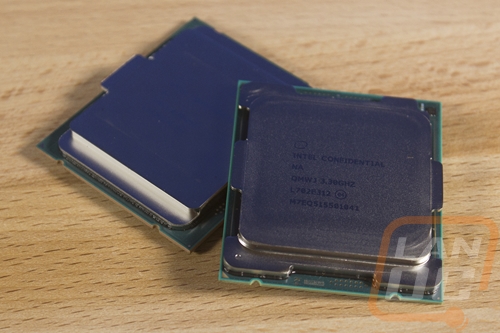 So now that we have run through the X299 and Core X features and taken a look at the performance of the i9-7900X and the i7-7740X, where does everything land. Well first off, let me say right out of the hole that you have to keep in mind that X299 and the Core-X series of CPUs are on a higher end platform than the mainstream CPUs. With Z270 only the highest end boards are going to be expensive and the most expensive CPU is closer in price to the low-end Core-X CPUs. So the buy-in cost, even at its lowest it will be closer to a high-end Z270 build, with costs going up from there. This isn’t anything new when compared to X99, X79, and X58 but it always comes as a surprise to anyone who is used to mainstream chipsets.

As for performance, I’ll be honest I came in not expecting too much from either CPU. The i9-7900X is in a lot of ways very similar to last years i7-6950X. The move to Skylake helps but the move from a base clock of 3 GHz to 3.3 and boost clocks going from 4GHz to 4.5 Ghz make a big difference. Unlike past high core count Intel CPUs, the 7900X actually has a decent IPC (instructions per clock) or in other words, the single core performance is really good. Times that by 10 core or 20 threads and in all of the multi-core benchmarks it is a monster with surprisingly good performance in everything else. Now there are still a lot of situations where the i7-7700K and the i7-7740X are faster though. The 7900X actually gets the full 44 PCIe lanes, Turbo Boost 3.0, and four channels of memory where moving down the product stack you slowly lose all of those features. That’s one of the big downsides to the i7-7740X, you only have 16 PCIe lanes and just dual channel memory.

The 7900X had good temps in my testing but when it came to power usage it didn’t do very well. The idle performance was fine but when you load all 10 cores it is going to pull the power. The 7740X, on the other hand, ran hot for me but had great power consumption. The 7740X from what I have heard is actually a great overclocker, I’m really looking forward to diving into that after the launch. It also benefits from Deliding as well.

So with both CPUs, the performance numbers look good, even when compared to Ryzen. The i9-7900X is outdoing Ryzen on the whole high core count gig with even better IPC and the i7-7740X is basically just another i7-7700K so gaming performance is good. What made the Ryzen launch so good was the pricing though and that is where we have to put a little more thought into everything. The i9-7900X is going to rip your wallet to shreds with its $999 MSRP and with that it is twice the price of the Ryzen 7 1800X, so while the performance is much better, it damn well should be at that price. This is the CPU you go for when you want only the best. The problem there is in a few months Intel has four more CPUs that are going to take over that role, not to mention with AMDs Threadripper upcoming. So I’m digging the i9-7900X, but I suspect it only has the main role for a few months unless it gets a big price drop when Threadripper comes out.

As for the i7-7740X, this is an even weirder CPU. You are basically getting an i7-7700K but on the X299 chipset and without the integrated GPU. It does have two things going for it though. If you are trying to build a high-end system but need to save some money now. You can build with this or the i5-7640X and upgrade to a higher end CPU later. The other benefit is that this could have the potential to be a great overclocking CPU. Paul from Pauls Hardware suggested this recently as well on one of his videos and I completely agree. I just don’t see a lot of the normal i7-7700K type of customers spending the extra money on X299 and an i7-7740X to get what is at best the same performance and not even get to use a lot of the features on the boards they buy due to the dual channel memory and the 16 PCIe lanes.

Personally, I’m not even against having the 7740X on X299, I just think it would fit better if you had the full PCIe lanes and memory. Really I’ve always wished the 4770/6700/7700 all were on the enthusiast platform and not on the mainstream like it was with X58. All of the fast CPUs were on the enthusiast platform and that is what you bought if you wanted to game. Mixing the higher end into the mainstream platform muddied everything up and dropped the interest in X79/x99.

So are the Core-X CPUs for you? Well I know I’m excited to build something crazy with them. But the i7-7740X doesn’t seem to be the sweet spot. I think the i7-7820X and the i7-7800X have the potential to compete with the people buying Ryzen R7. The i7-7740 with more PCIe lanes and quad channel ram and crazy overclocking potential though could have been amazing. I hope Intel reconsiders. So to answer my initial question, i7-7740X no go, i7-7800X maybe, i7-7820X, maybe, and i9-7900X yes but only if you don’t like money and you can’t wait for the other CPUs that are upcoming. 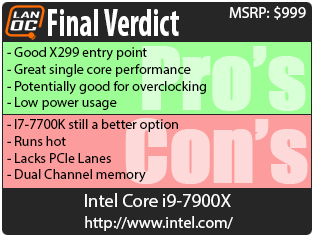 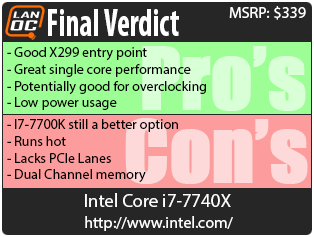 You might call him obsessed or just a hardcore geek. Wes's obsession with gaming hardware and gadgets isn't anything new, he could be found taking things apart even as a child. When not poking around in PC's he can be found playing League of Legends, Awesomenauts, or Civilization 5 or watching a wide variety of TV shows and Movies. A car guy at heart, the same things that draw him into tweaking cars apply when building good looking fast computers. If you are interested in writing for Wes here at LanOC you can reach out to him directly using our contact form.
Discuss this article
Log in to comment
Posts in discussion: Intel Core X Series i9-7900X and i7-7740X