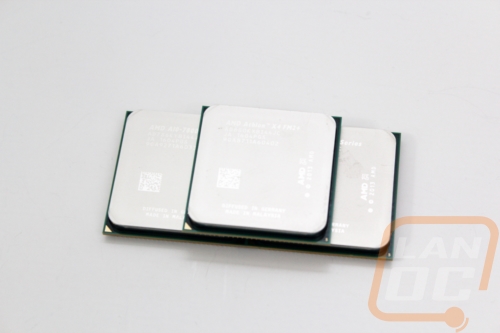 For the last bit of testing I wanted to take a look at a few different things with the A10-7890k, A10-7860k, and Athlon X4 880K. First I wanted to see just how much power usage you should expect when using each of the APUs/CPU. Then after that I wanted to check out their thermal output. For the first test I ran wPrime to get my load numbers while using a Kill-A-Watt to watch the total wattage used by the test bench. This means each result isn’t just the CPU, it does include the SSD, motherboard, ram, cooling, and dedicated GPU (at idle) as well. So these numbers aren’t going to match the TDP, but they do give you an idea of what to expect and they compare nicely to each other because each were run on a similar setup. For the processors tested today I was surprised to find that the 880K pulled more power both at idle and under load than the A10-7890K with its slightly higher clock speed. Both fall right with the FX-8320E that is an entry level AM3+ CPU. The Intel CPUs like the i7-6700k and the i7-5775C are both more efficient and the higher end i7-5960X pulls about 30 watts more. The A10-7860K with its 95 watt TDP did pull less and was almost the same both at idle and under load as the i7-6700k. 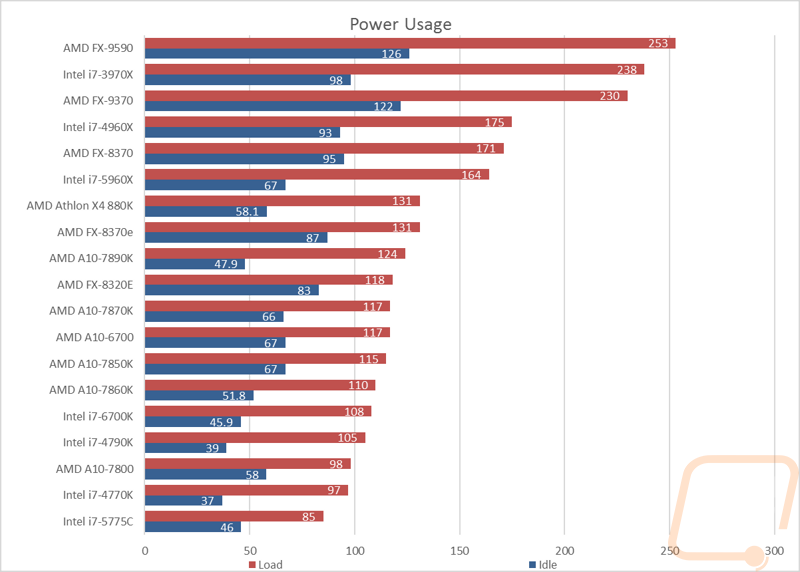 For temperature testing I used Prime95 as it generates more heat, pushing each APU/CPU to the limit. Here the all three ran much cooler than anything from Intel. The 7860K with its low TDP ran the lowest with a near room temperature 35 watts and the other two were 44 and 46 degrees respectively.

While not a normal test, I did have the chance to put all three of AMDs new coolers to the test as well. I ran all three coolers using Prime95 and documented their performance. With the tiny 95 Watt cooler I only tested it on the 7860K that it came with. I had originally planned on testing it with each CPU but after seeing how warm the 7860K ran I knew it would struggle with the additional heat that the other two put out. The results did show us a few things. The Wraith cooler and the 125 Watt cooler both perform great. With them sharing nearly everything it’s no surprise that they have nearly the same results. I would completely avoid the smaller 95 Watt cooler though. Even with the 65 TDP A10-7860K it struggled, I wouldn’t trust it with anything else. The other two coolers are larger of course, so if space is an issue I would seriously be considering picking up an aftermarket cooler in that situation.