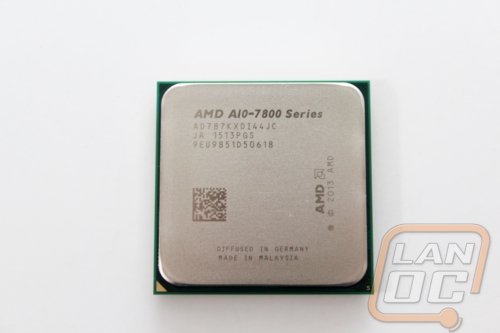 After finishing up CPU performance testing with a dedicated GPU I pulled the GPU and did another set of benchmarks using the onboard GPU in the 7870K. Here I was hoping to find out if the 20% clock speed improvement would show much in the performance numbers. To start things off I ran both Cinebench benchmarks again but this time focusing on the OpenGL rendering FPS result. The A10-7870K pulled ahead of the 7850K by two FPS putting it up over the i7-4790K’s onboard GPU. For comparison the i3-4330 that is the 7870K’s direct competition runs the same GPU as the i7-4770K but with a much slower CPU and the 7870K pulled well ahead of its performance.

Next I ran through 3DMark Fire Strike and the 7870K does pull a small lead on the 7850K. Ignoring the crossfire result the 7870K is AMDs fastest APU with only the much more expensive i7-5775C pulling ahead.

Using the Unigine based Heaven Benchmark 4.0 as well as the newer Valley Benchmark we start to get a peek at in game performance. For starters none of the onboard GPUs come anywhere close to having enough power to really push these two benchmarks at their highest settings. That said we can see that the 20% clock speed improvement for the A10-7870K does show in the performance numbers. So much in fact that it actually put the 7870K up close to the performance of the 7850K paired with a dedicated video card in Crossfire. The Intel 5775C is still at the top of the charts but the HD4600 based CPUs from Intel aren’t anywhere close.

As gamers all of the other numbers are nice, but what I’m curious about is if I can get away with gaming at all if running just on the onboard on the A10-7870K. When compared to the other CPUs the Intel 5775C still tops the charts but in most cases here the A10-7870K is just behind it. The 20% gpu clock speed improvement doesn’t translate into big numbers in most of the games but in most games it does mean one FPS. By itself that one FPS isn’t a big deal, but it does help push the onboard performance from the 7870K up into the 30+ average FPS that typically means playable but not perfect. In other words most of the games tested are just a few tweaks away from being very playable when running at 1080p.

We have 695 guests and one member online