Beyond the CPU and GPU performance it is also important to consider a CPUs efficiency. We can get a look at this when we take a look at the power usage as well as how warm it runs. Generally as the TDP and power usage goes down CPUs run cooler as well. For Broadwell they did drop the microarchitecture down to 14nm, for the most part going smaller does mean a little better efficiency. In the case of the i7-5775C they also dropped the TDP down 65 watts. The i7-4770K had a TDP of 84 watts and the i7-4790K had a TDP of 88 watts so they did make a big improvement there. That is partially from the lower clock speeds as well as the smaller microarchitecture. Because of that it’s not a big surprise when we see that the power usage for the 5775C pulled an impressively low 85 watts under load and 46 at idle. The idle number is actually up from the 4770K but the load numbers are the lowest we have tested on a full PC. 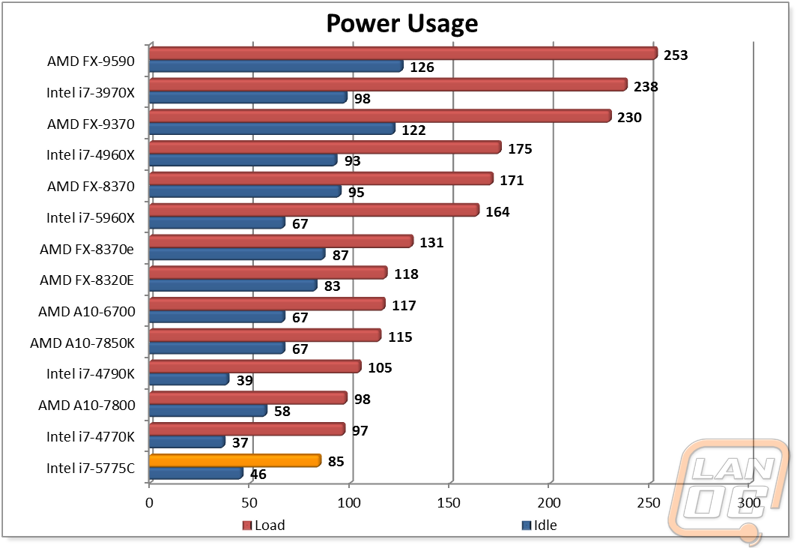 Oddly enough though our temperature results weren’t exactly what I expected. They are still well below the heater that is the AMD 9590 but they were actually up over the 4770K and 4790K. I suspect that going to the smaller architecture raised the temperatures slightly and it also explains why Intel didn’t go with higher clock speeds than they did with the 5775C.

Once I saw the temperatures that the 5775C put out I was even more curious how it would overclock. Typically the biggest limitation when overclocking is heat so running a little warmer than past models, even with it being such a small amount, could change the overclocking performance. When overclocking I slowly bumped up the multipliers until I had issues then I turned up the voltage, then back to the multipliers, over and over until I went as high on the voltage as I was comfortable with. That limit was at 1.47 for me, I’m sure there is some room left in it, even on air but in the end I was able to see 4.4 comfortably. There was a little room in the actual clock as well, but it didn’t give us much.