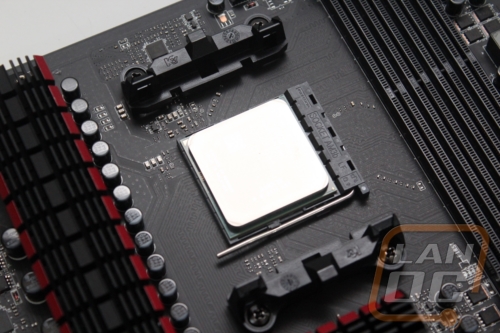 Like I mentioned before, AMD included the MIS 970 Gaming motherboard along with their CPU because of its low price and high feature set. I couldn’t just leave it at that though, I had to at least take a look at what you get when you buy the board. Starting with the packaging you get the standard black and red theme that all MSI gaming boards have had for the past few years. The front has a large dragon across it as well as the boards name in big letters. Around on the back MSI has included a few small photos of features as well as short write-ups on 7 of the boards features. They also included a small specification listing as well as a line drawing of the rear I/O panel to show what connections you get with the board. 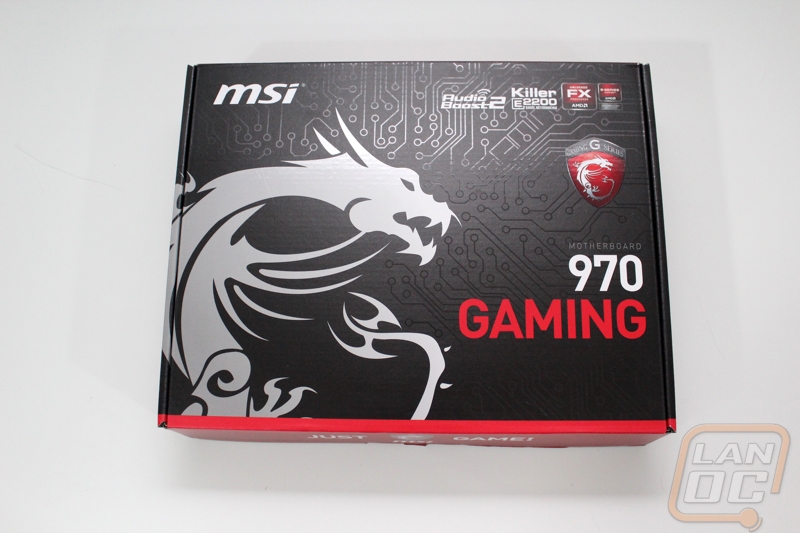 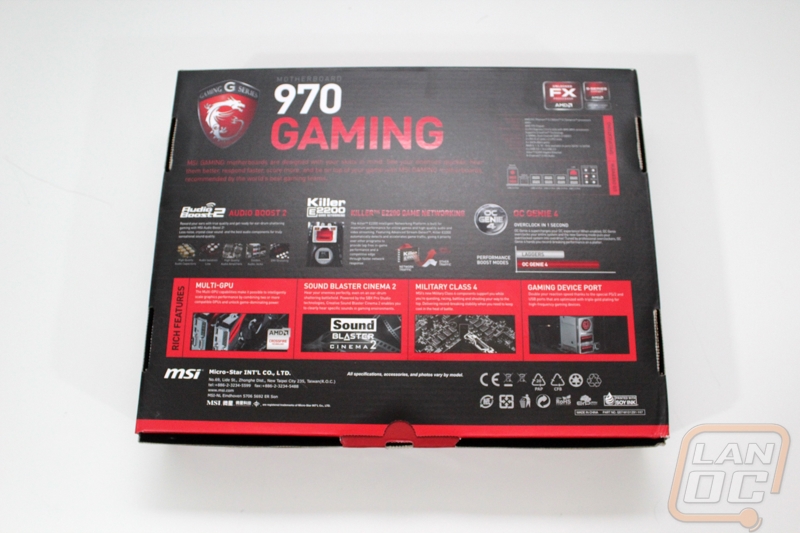 Inside, along with the board itself you get a stack of documentation, a black flexible SLI bridge, and two black SATA cables. For documentation you get a user guide, an installation guide, a door hanger, SATA tags, and a software/drive disc. 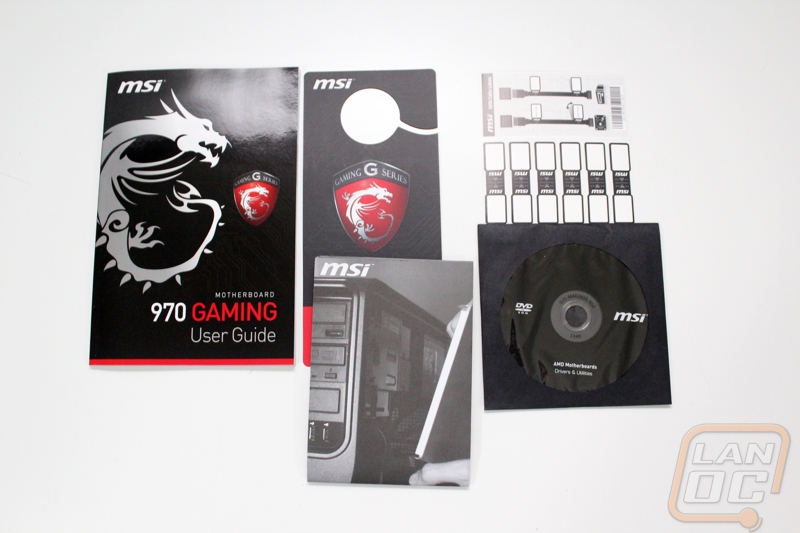 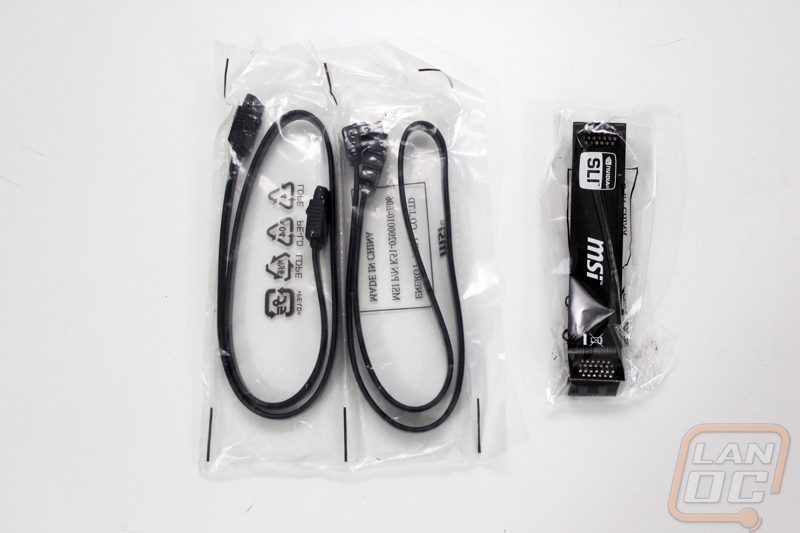 You also get a rear I/O panel as well of course. MSI made sure that the I/O panel matches the board with a blacked out design with red lettering and a red MSI Gaming Series logo on it. On the back of the I/O panel I was happy to find a foam rather than the metal springs that can cut up your hands and get caught on different plugs when installing the board. I have found out after getting things together many times that there is a metal tab stuck in my Ethernet plug or similar. 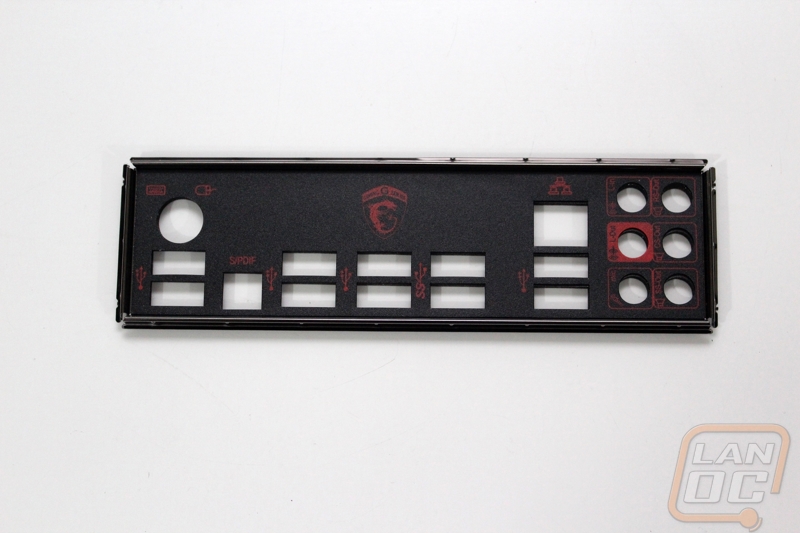 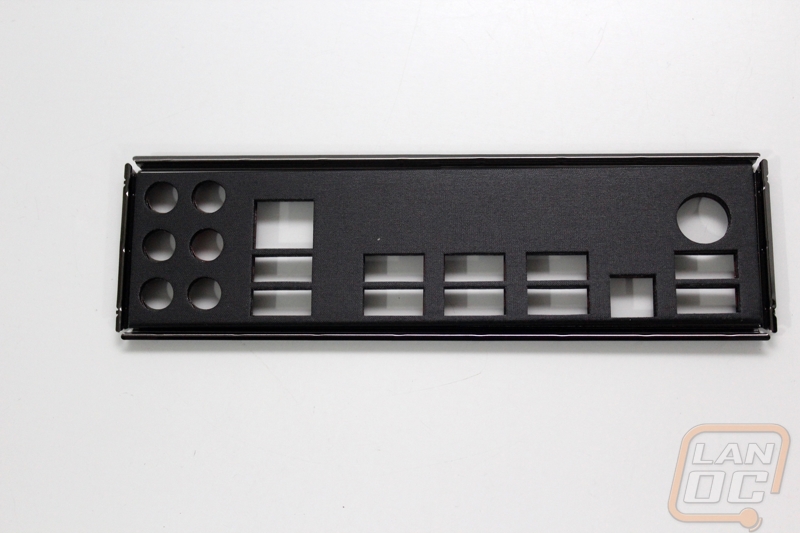 With the packaging aside I could finally get a better look at the board itself. There weren’t any big surprises, the 970 Gaming has the same flat black theme with a little red trim that all MSI Gaming Series boards have had. This gives a nice clean look when installed in your typical black case. It is a full ATX motherboard with a standard CPU location so there shouldn’t be any fitment issues. 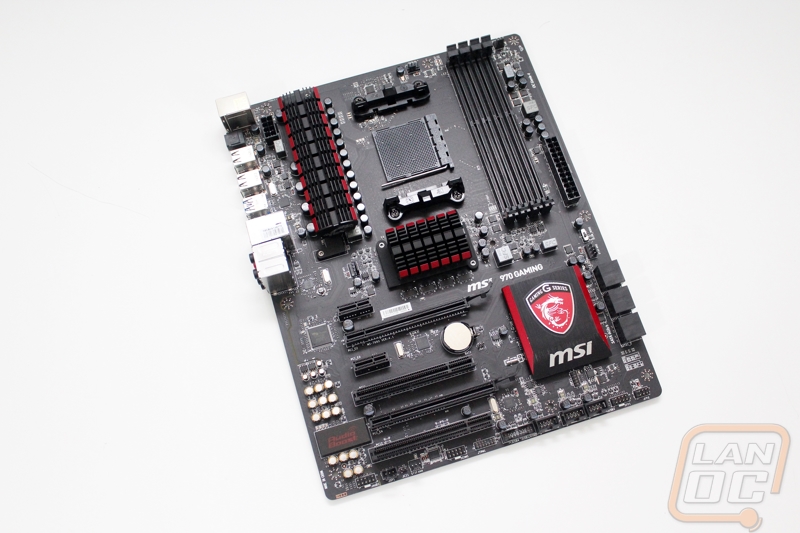 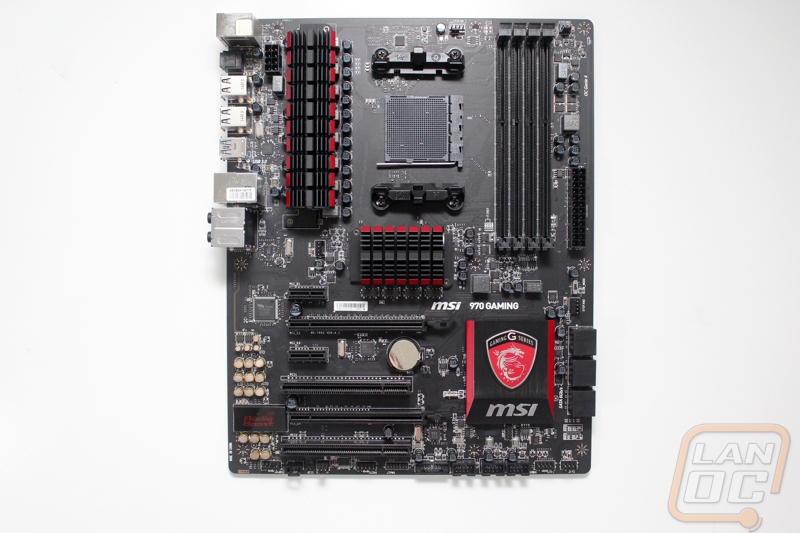 For cooling the 970 Gaming has three heatsinks. There are two around the CPU with one on the left and the second under the CPU. The third heatsink is the chipset heatsink to the right of the PCIe slots. Obviously the chipset heatsink is low profile for clearance with longer PCIe devices. The other two are about an inch tall. They are both black with red trim on two sides and they both have a chrome dragon on the end. The taller heatsinks have more surface area with small ¼ inch wide pegs. 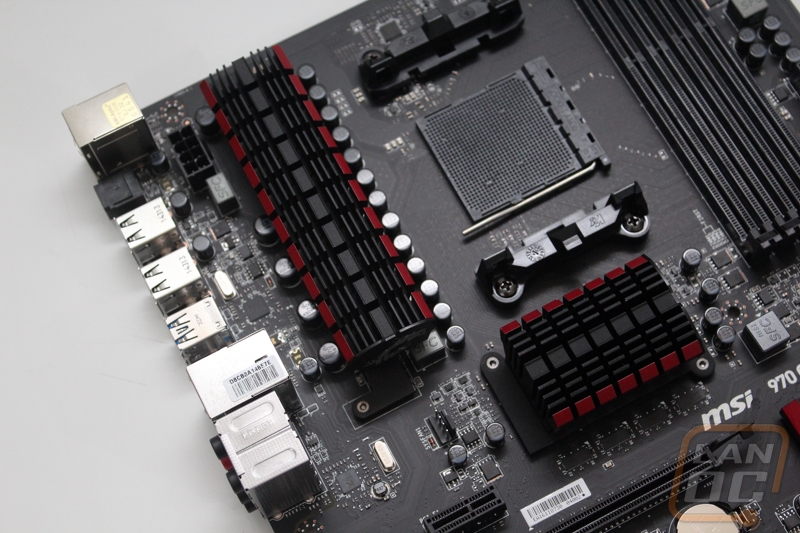 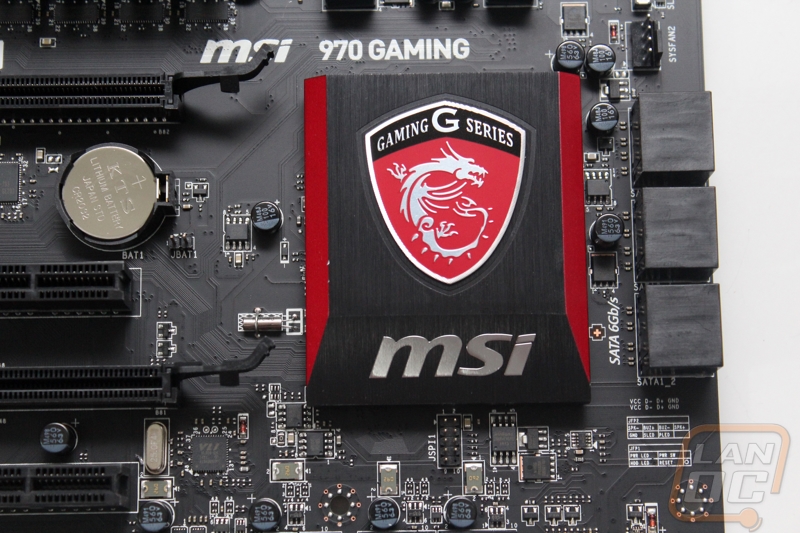 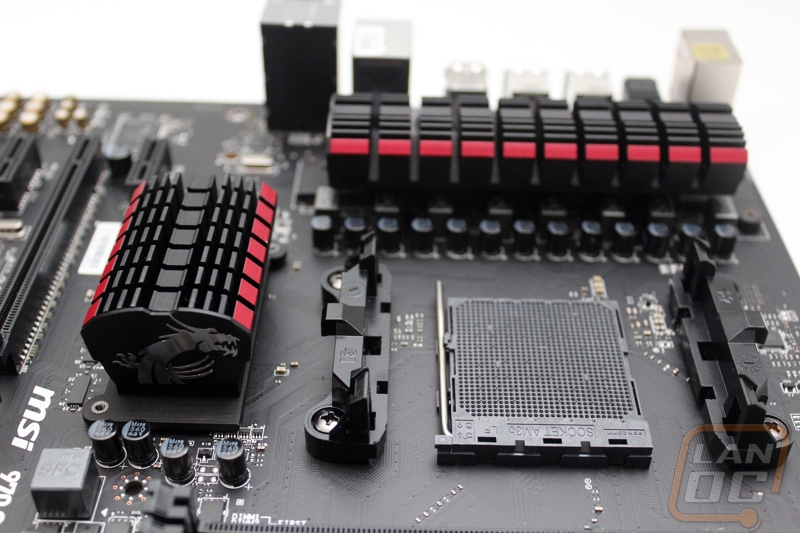 Back on the rear I/O panel we have a few things going on. For starters you get a six port audio panel, five of the connections are in black with one red port. The red port is the one with the built in headphone amplifier. For USB you have a total of 10 with two of those being USB 3.0 and two (in red) that are designed with thicker gold on the connections for people who unplug and plugin their mouse and keyboard a lot (eSports and LANs).  They also included a legacy PS2 port for those who have keyboards that support it. The killer NIC is in red as well. Last but not least is a button that clears the CMOS without you having to take the side panel off and play with jumpers. 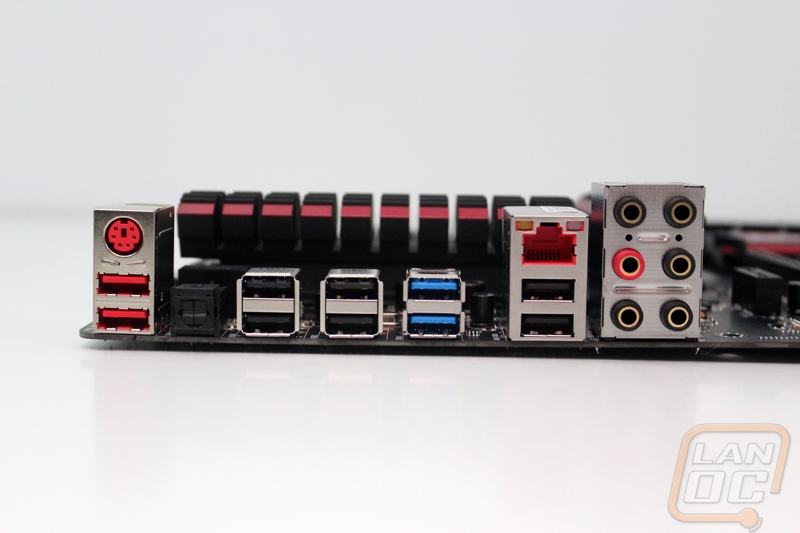 Starting up in the left corner behind the rear I/O panel the largest of the three heatsinks takes up most of the space. MSI did manage to fit the 8-pin CPU power that space though. There is also a 4-pin PWM fan header down in between the two heatsinks. The rest of the space is taken up by the CPU socket itself. There aren’t any surprises there, AMDs sockets have been close to the same for many years now. 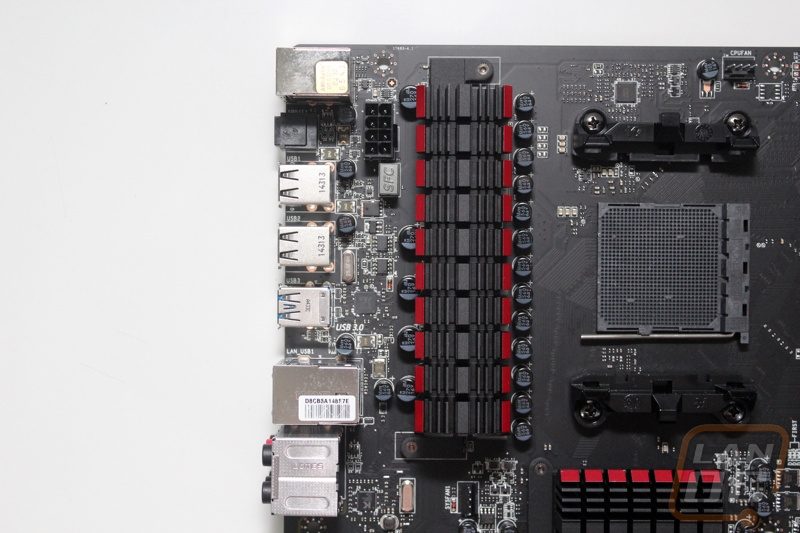 Moving over to the top right of the 970 Gaming we have four DDR3 DIMMs in all black to match the flat black board. There is a 4-pin PWM fan header for the CPU just above the CPU socket and then 3-pin fan header up in the top right. It’s a little weird to me that they didn’t just go with all PWM fan headers though. The only other thing of importance in the top right corner is the 24-pin motherboard power connection. The rest of the area is oddly lacking in any other features or highlights. 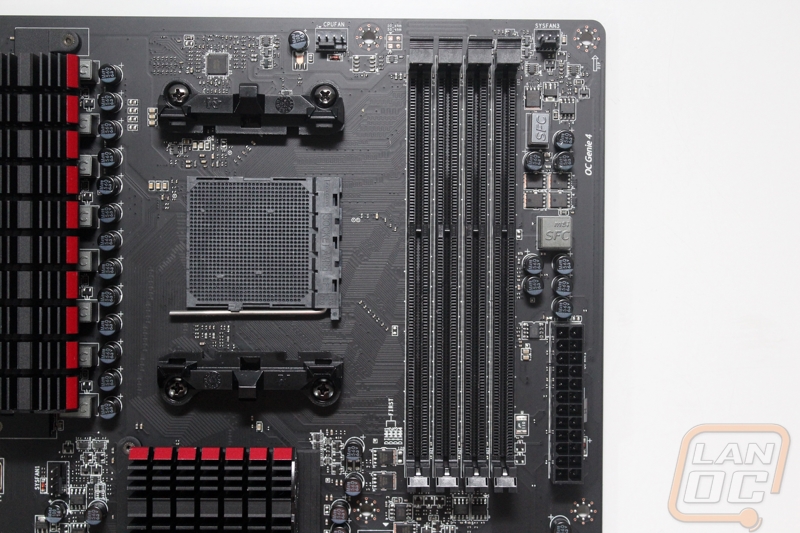 Down in the bottom right corner of the board there is a lot more going on. For starters we have another 4-pin PWM fan header making for 3 4-pins and 1 3-pin so far. Below that are six SATA3 ports, all sitting at a right angle. Down in along the bottom edge we have three USB 2.0 headers and a USB 3.0 as well. In the corner is the front panel header, the diagram for each plug is up near the SATA ports to help you know where to plug everything in. 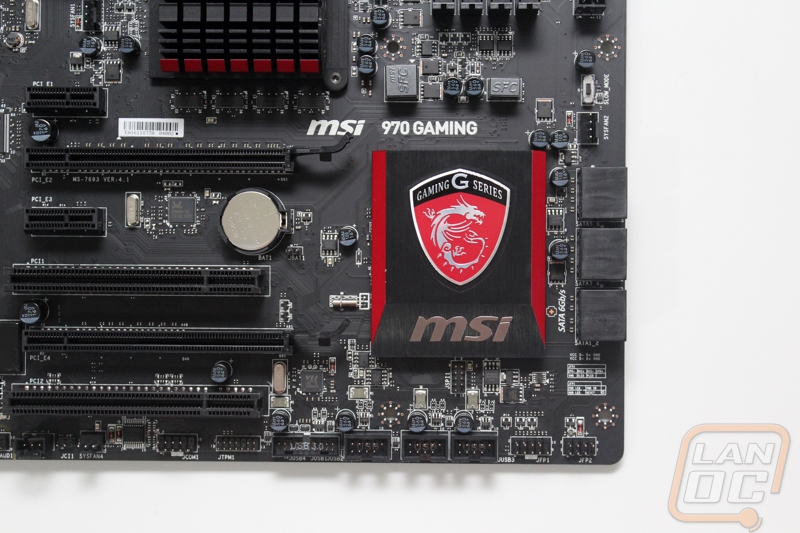 On the bottom left corner we have another system fan header, this one is a 3-pin. That makes the total 3 4-pins and 2 3-pins for the board. Beyond that there is a communication header and a trusted platform header as well. The entire left corner of the board is dedicated to the onboard audio card. MSI split up the PCBs and highlighted it with a resin filled gap the entire way around it to make it easir to see and to help isolate the sound card more. While this is a budget board, they did do a good job including a built in headphone amp, a cover over the sound card to help protect it from interference, and they also used Nichicon capacitors as well for the best possible audio quality. 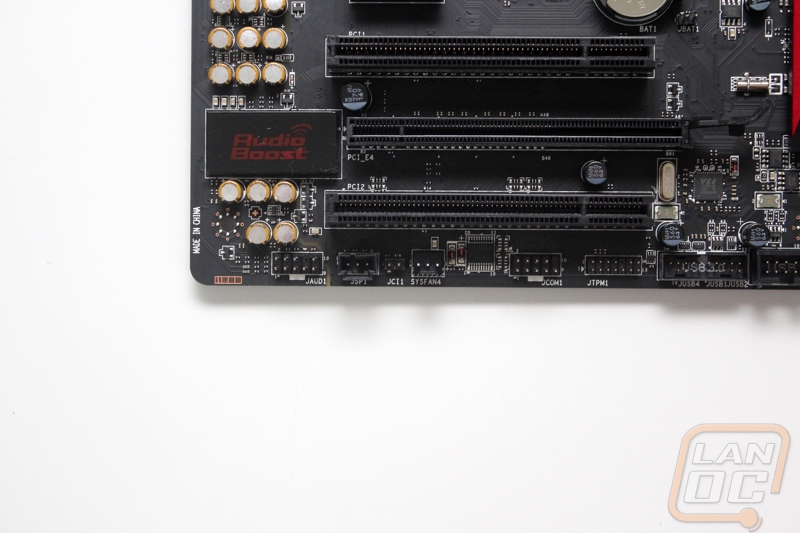 For PCI slots we get one PCIe x16 slot, one PCIe x16 slot with an x8 speed, two PCIe x1 slots, and two legacy PCI slots. It’s a little weird seeing PCI slots and I would prefer to see the PCI slots being used under the PCIe x16/x8 slots to leave the more usable x1 slots available even when running dual card configurations. 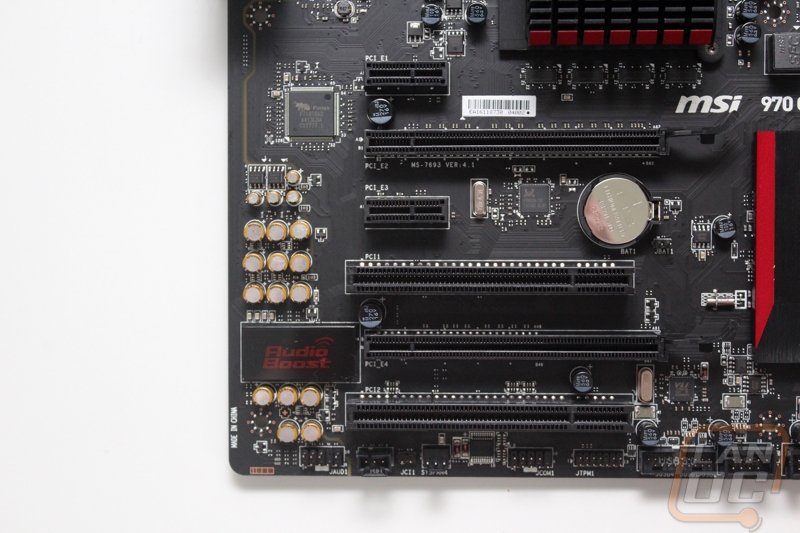 Flipping the 970 Gaming around we get a better look at the flat black PCB as well as all of the hidden logos that help keep the top of the board clean looking. There are a whole bunch of screws visible on the back as well that hold down each of the heatsinks as well as the shield over the sound card. Typically most motherboard heatsinks aren’t held down with screws like this, but it should make removing them and reapplying thermal paste much easier in the future if you ever need too. 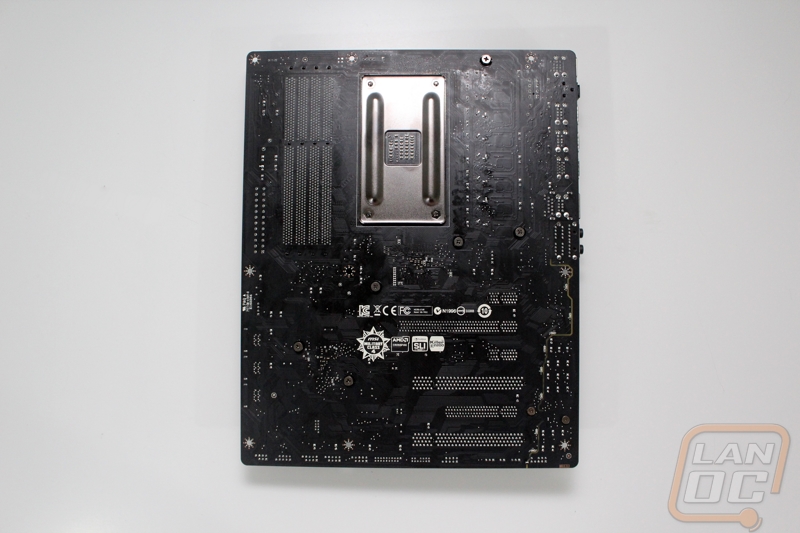