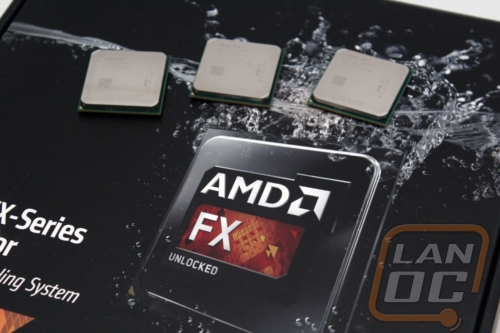 As usual I ran through our CPU benchmarks on all four of the FX CPUs to see how they would compare to the previous CPUs tested. To make following things a little easier I color coded all four CPUs the following colors.

To start things off I ran the CPUs through X264 HD to see how well they would perform. Not surprisingly the FX-9590 was the fastest out of the four but what really interested me was how they compare to the Intel CPUs. The 9590out performed the 4770k in the second pass showing that sometimes having four extra cores can come in handy. The 8370 came in closer to the older 3770k and the 8370e performed a lot slower, pulling numbers close to the old 2500k. 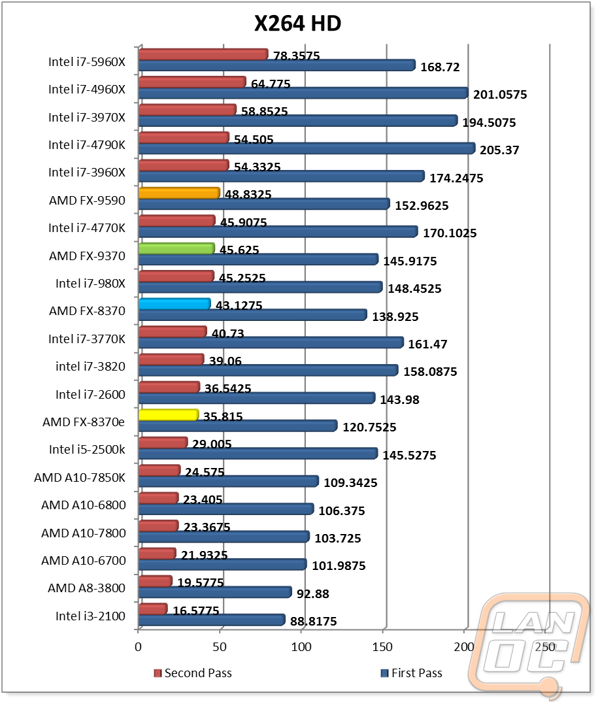 Cinebench is always my favorite benchmark because it allows me to see both single and multi core performance next to each other. As a whole single core performance was lower than I would have liked. This wasn’t a big shock considering that these are all based on an older architecture. For perspective the 4.7/5.0GHz FX-9590 pulled a 1.18 on the single core benchmark. The Intel i7-4790K pulled nearly doubled the number with a 2.05. The eight core i7-5960X was a little closer with a 1.51 at a much lower clock speed. Even so, over on the multiple core test all four of the CPUs show a large improvement over the AMD APUs, putting them up near the 4770K. If you plan on running any of these CPUs you might want to make sure your programs and games are optimized for multiple cores. 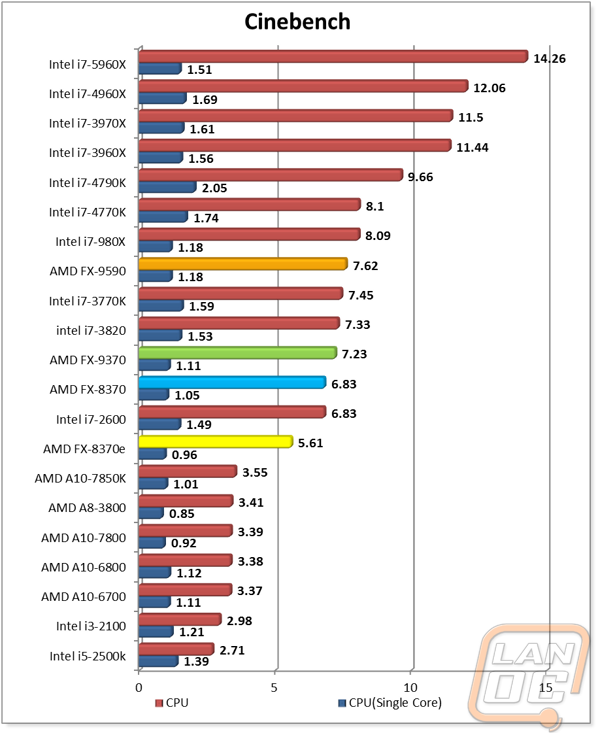 The Passmark 8 benchmark runs through multiple individual CPU tests and averages out a score. Between the 9590 and the 8370e the AMD CPUs hit a wide range of performance here. At best the FX-9590 performed right on par with the slightly dated 3770K but frankly the FX-9370 and FX-8370 weren’t far behind. The lower powered FX-8370e took a hit once again pulling numbers lower than some of the APUs and Intel CPUs from a few years ago. 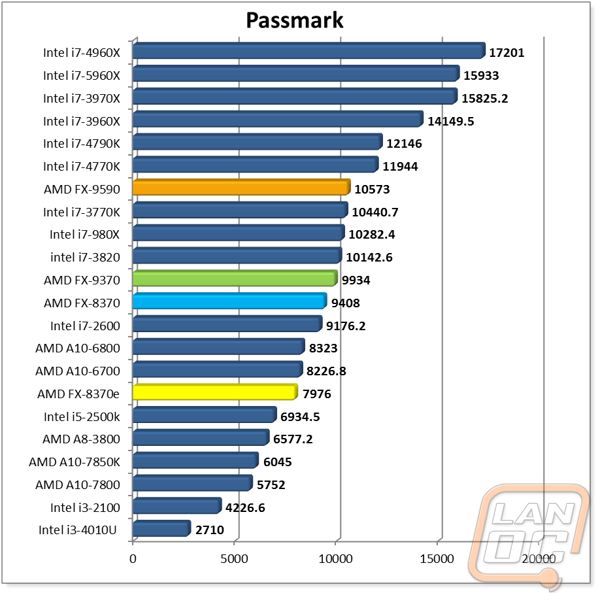 PCMark 7 and 8 are both even more general. These tests take into consideration other chipset factors like memory bandwidth and storage performance on top of overall CPU performance. In PCMark 7 the FX-9590 almost tied with the dated but still fast i7-3960X. The higher end Intel CPUs still topped the charts as expected but the FX CPUs are still hanging in there, near where Intel’s i5’s would be performance wise. In PCMark 8 I was disappointed with the FX CPUs performance in the OpenCL testing, but they did well in the conventional testing, all four outperformed the new i7-5960X! 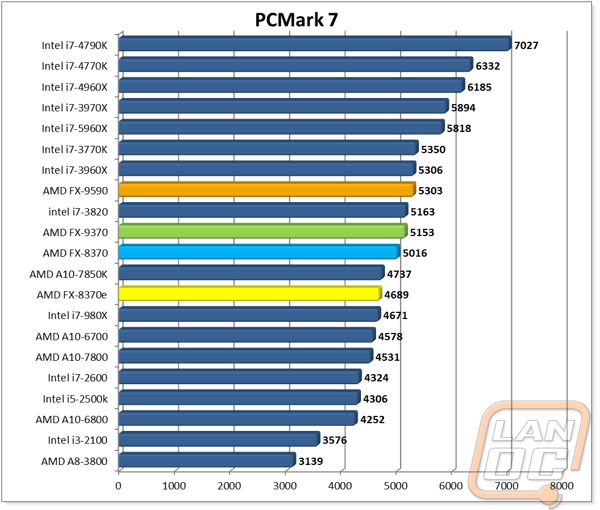 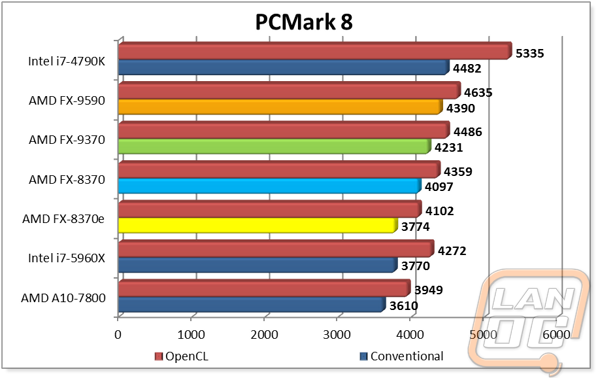 For pure number crunching the high clock speeds of the FX-9590 and FX-9370 really impressed me. They bested the new i7-4790 with its amped up clocks. When compared to the 6 and 8 core CPUs though they still are down near the bottom with only the extremely old i7-980X performing slower. Once again the FX-8370e took a fairly big hit in performance compared to the higher wattage FX-8370. Overall all four are still on the top half of our charts, especially when compared to the AMD APUs. 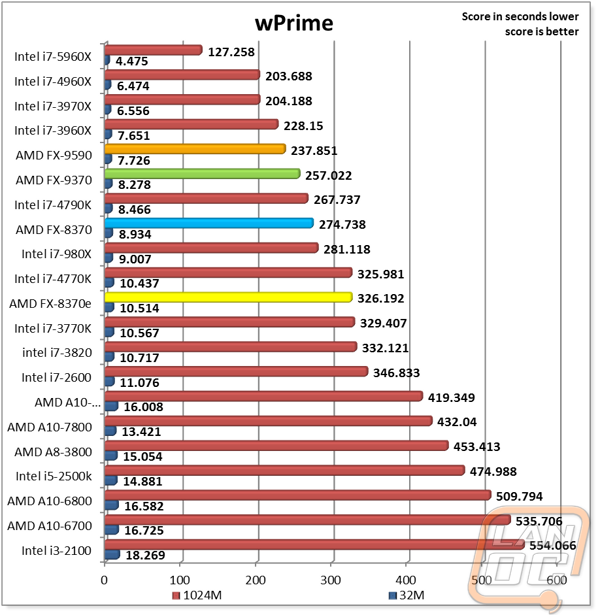 For 3Dmark we start to get a peek at what the FX CPUs might do in gaming situations. They fall about right where they should price wise when compared to the Intel CPUs. Even so I would have hoped to see the extra cores and extreme clock speeds at least give the latest four core CPUs a fight. 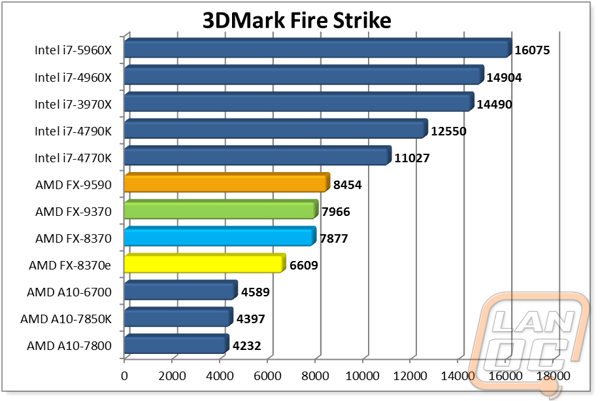 While the FX CPUs didn’t blow away any of the Intel CPUs, they did still manage to show what I have talked about in the past. In a LOT of games your CPU performance isn’t going to make a huge difference in FPS. In most cases you will see a drop of 5-6 FPS when going with a noticeably slower CPU. The exception to this are notorious CPU intensive games like Civilization for example. 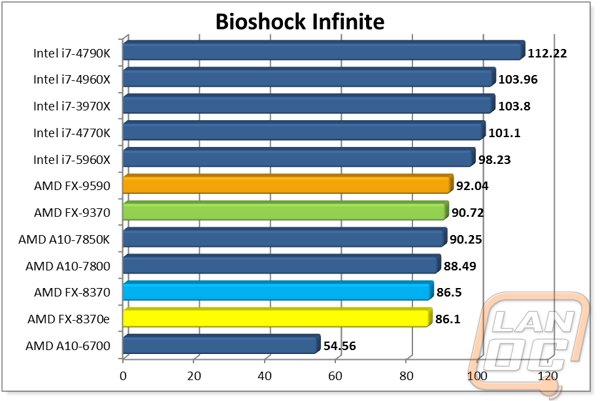 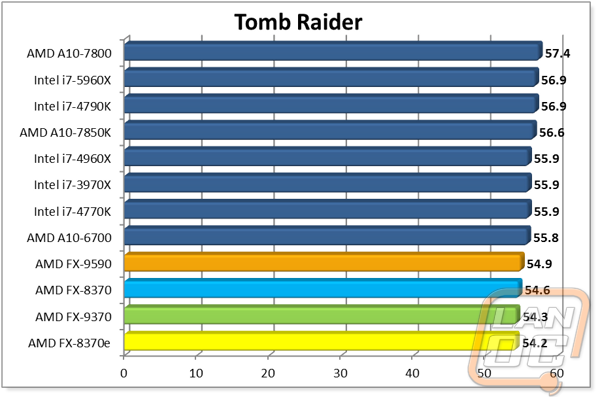 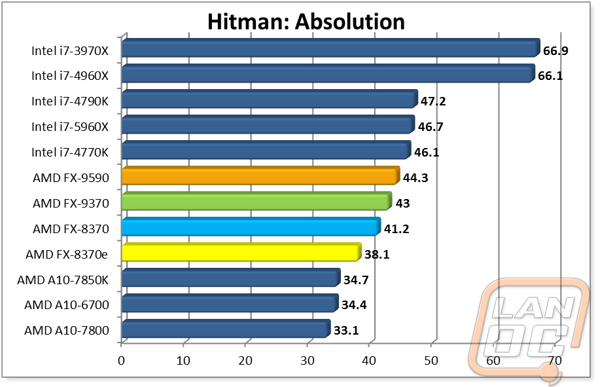 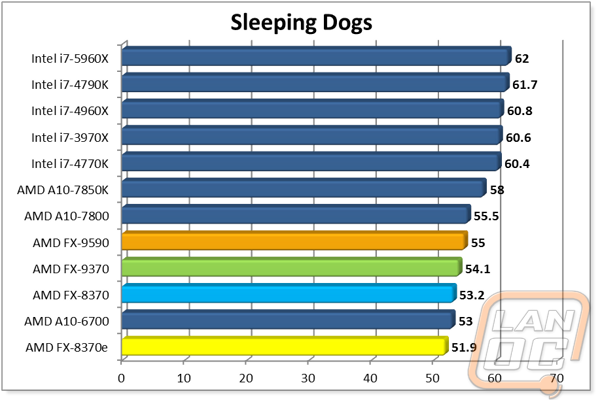 We have 1699 guests and one member online