Okay so let’s get down to the nuts and bolts. Haswell-E is a major performance jump over Ivy Bridge-E, even when considering the lower clock speed. Having the two extra cores does make up for the clock speed deficit in most benchmarks but I did find a few that it didn’t excel at. When it came to temperature and power performance I was the most impressed. Intel managed to edge out more performance while dropping the idle and load power usage by large margins and this showed in the load temperatures.

Going with DDR4 is also something to consider when going with the 5960X. DDR4 is extremely exciting but it will mean dropping your old DDR3 with your new build and starting fresh. Additionally DDR4 costs more than DDR3 currently and the selection is going to be a little limited while companies start to fil in their DDR4 product lines.

The bigges thing to consider though is the overall investment you will have to put down for the i7-59060X. Being the flagship CPU it is going to run you $999. That alone is enough to scare a lot of you off. Of course if you are looking at going with this monster your budget is going to be higher than the average build. Thank goodness for that because much like the previous 2011 and 1366 socket motherboards, the average board costs more. This is mostly due to the additional features you are getting, but packing in 8 DDR4 DIMM slots adds to the cost as well. In the end, to get a motherboard, CPU, and RAM similar to what I tested with you will be looking at something close to $1700 or more. Intel did consider this though and there are two more Haswell-E CPUs with much lower price points, so don’t discount X99 on the cost completely. Even with the lowest priced CPU you are getting more PCIe Lanes than an i7-4790K, not to mention the memory bandwidth. If you are planning on going with two or more GPUs in the future this is really the only good way to go.

In the end, it really depends on how you plan on using it, if your games and programs depend on clock speed you might want to consider the 4790K or even the 4960X, that is of course not taking into account if you need the additional PCIe lanes and memory bandwidth. For me I will take the small hit on software and games that are optimized for single or low core counts and roll around in all of my extra compute power, memory bandwidth, and multiple GPUs. 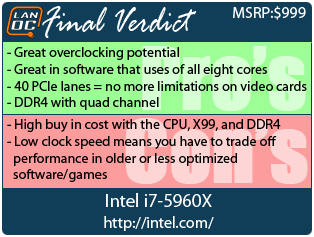 You might call him obsessed or just a hardcore geek. Wes's obsession with gaming hardware and gadgets isn't anything new, he could be found taking things apart even as a child. When not poking around in PC's he can be found playing League of Legends, Awesomenauts, or Civilization 5 or watching a wide variety of TV shows and Movies. A car guy at heart, the same things that draw him into tweaking cars apply when building good looking fast computers. If you are interested in writing for Wes here at LanOC you can reach out to him directly using our contact form.
Discuss this article
Log in to comment
Posts in discussion: Intel i7-5960X Haswell-E

We have 1194 guests and no members online