I broke my overclocking down into two stages. I actually ran the CPU through Asus’s TPU to see what it would automatically be pushed up too. Then from there I had a base number to be able to work from to try to extend the overclock even higher. My experience with Asus’s optimization has always been great and I was happy to see that they stepped things up even farther with optional testing that you can configure between each overclock. If you want, you can set it to test for hours after each overclock before trying the next one. This is great if you can’t afford to have it crash in the middle of your work.

In the end using the built in software I was able to get 4.7GHz out of our 5960X. To put that in perspective, that is a 42% increase across 8 cores. All without even touching the Bclk. From there I jumped into the UEFI and toyed with it a little more, upping the voltage slightly and I was able to get 4.8. At that point toying with the Bclk meant nearly a 50MHz jump for each one step. In the end, I was able to edge out just one before running into a temperature wall. This put us at an impressive 4.85, well above what some of the motherboard manufactures were telling me to expect. In fact they suggested a 4.6 to be a “good” CPU with 4.5 being more average. 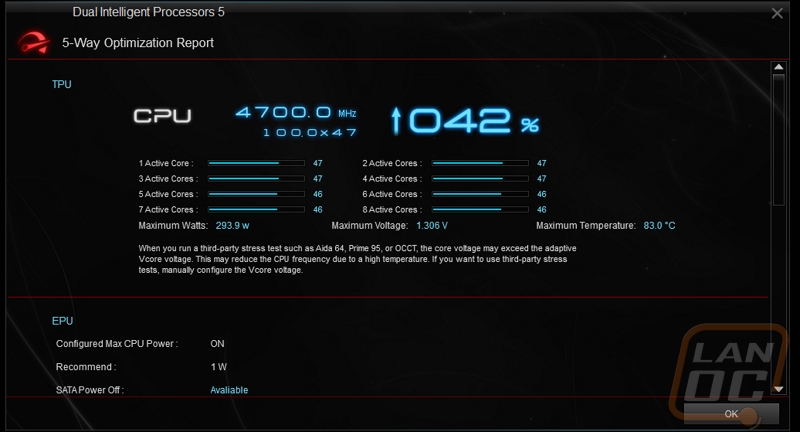 Sadly the water cooling on our second test bench isn’t performing up to par, I would have loved to see if I could edge out a little more performance. I might just have to build a new build featuring the 5960X just to go a little extra crazy on the cooling and see if this hot chip won’t go to 5.0.

We have 960 guests and no members online