When it came time to finally start testing the CPU I was ecstatic. I jumped right into my favorite benchmark, Cinebench, because I couldn’t wait to see both an overall CPU performance number alongside of a single core number to see where Haswell-E compares to Haswell and Devils Canyon. I didn’t have huge hopes on the single CPU test due to the 5960X’s 3GHz clock speed, but it didn’t to bad. The lower clock speed showed in the single CPU score, putting it just below nearly everything Intel has put out on the high end for the past five years. This is still worlds above AMD’s APUs and not far from the other Intel 6 core CPUs I have tested. The 5960X showed up to the plate when it came time for the overall CPU score though with a huge jump over the 4960X. This is almost 48% higher than the speedy i7-4790K. I have a feeling if this CPU can overclock well back up to 4GHz or higher its going to be a monster. 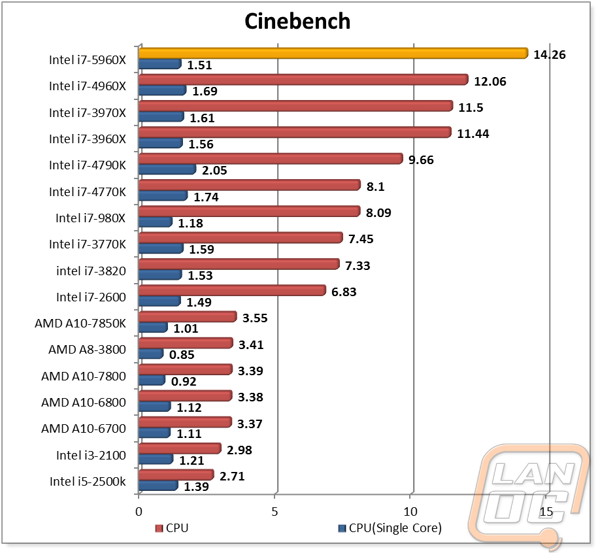 X264 gave me an interesting result. The second pass, the one that I sort by in the graph below, pulled an impressive 78FPS. The first past though came in down in between the 4770k and the 3770k. 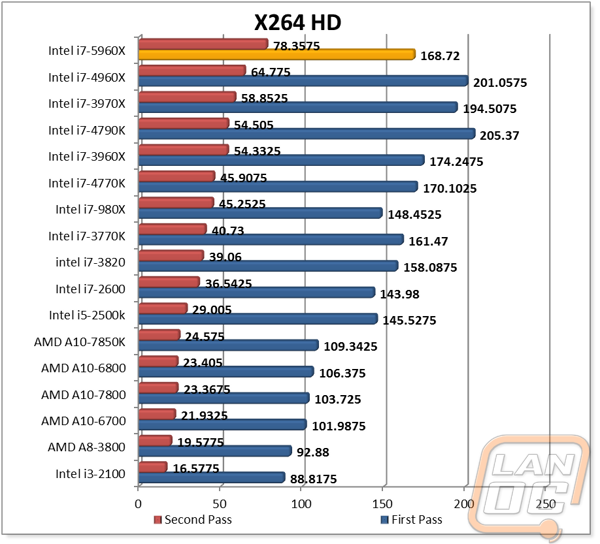 Passmark seems to take into account both number of cores and clock speed putting the 5960X in between the 6 core CPUs with high clock speeds. 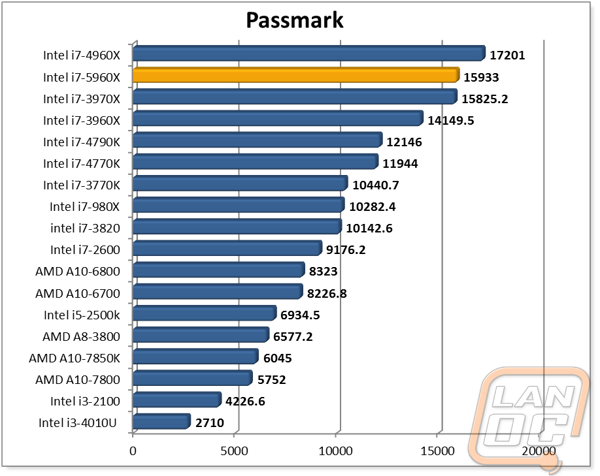 For PCMark I went ahead and ran through PCMark 7 even though I am planning on dropping it. I really wanted to still be able to compare the results to some of the older CPUs that we have tested. I did still run through PCMark 8 as well using both the OpenGL test and the conventional to see the difference. Both tests favor the overall clock speed. This can be seen especially in PCMark 7 where two of the four Intel 6 core CPUs performed better than the 5960X even though we know overall it is a faster CPU. 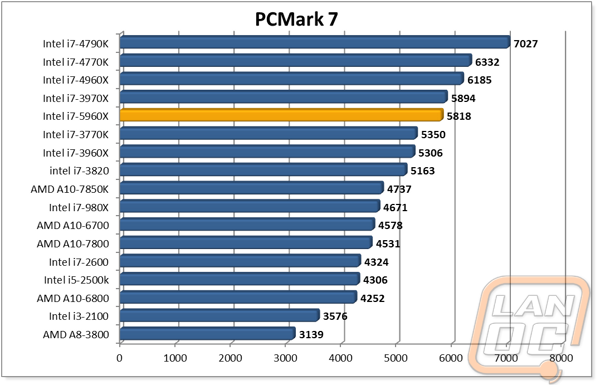 Having 8 cores came in handy when it came time to test in wPrime. The 5960X rocked both results by a large margin. 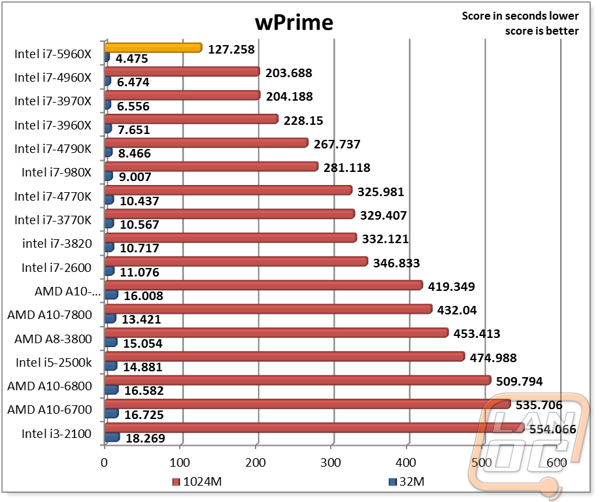 The first real test that might indicate gaming performance was my run though of 3DMark Fire Strike. As you can see below the 5960X did very well, towering over the others.

Real gaming performance isn’t as always as cut and dry as 3DMark though. For the most part Sleeping Dogs and Tomb Raider aren’t dependent on the CPU for additional performance so the results are a wash. I like to include them to show that even with a monster CPU like the 5960X you are still going to run into a lot of games that will run nearly the same on almost anything as long as you have a great GPU. Of course Hitman is showing an interesting result with the older 3970 and 4960X leading by a huge amount. Their 6 cores and extremely high clock speeds perform help a lot but the eight cores of the 5960X helped it stay close to the 4790K with its high clock speed and half the cores. This is the one test that clearly benefits from both clock speed and number of cores. Bioshock on the other hand cares nothing about the number of cores you have, only how fast your clock speed is.

We have 1669 guests and no members online