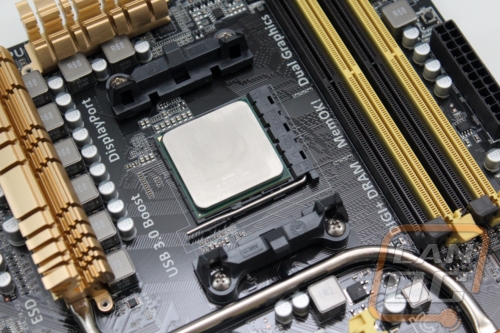 There isn’t any one test that can show the overall performance of any CPU or APU compared to others. For the A10-7850K I ran through our entire suite of tests and then broke them down in groups to help you pinpoint the exact benchmarks that apply to you.

Our in game and 3D performance benchmarks are all run with a GTX 780 installed and active and don’t have anything to do with onboard video testing that is on the next page. Here was can see how well the CPU performed in real world gaming to give you an idea of any CPU bottlenecks you might run into when running on of today’s fastest video cards. In some cases like Tomb Raider, the benchmark result is still completely limited by the video card. However, in some of the other cards and benchmarks we can see where the A10-7850K stands compared to the competition. From here, you can decide at what point is the difference not worth the additional cost that something like an i7-4960X would cost.

In the Fire Strike benchmark, it is also important to know that this is not the overall score; this is the physics score so the large gap between some of the CPUs isn’t as obvious. With that said the A10-7850K did perform better than the Richland based APU but in most cases there is still a fairly large performance gap between it and Intel’s leading CPU in game, specifically in Hitman. If you plan to use the A10-7850K in a gaming build you will still get a good gaming experience, but CPU reliant games could still use a little more performance. Depending on what you play this might not be an issue, but keep it in mind.

In PCMark 7 I ran through the entire test but to keep the results easy to read I am using the overall score to compare the performance of the 7850K to the other APUs and CPUs. In this benchmark AMD made large improvements from the 6700 and 6800, putting the 7805K over that extremely powerful 980X CPU. 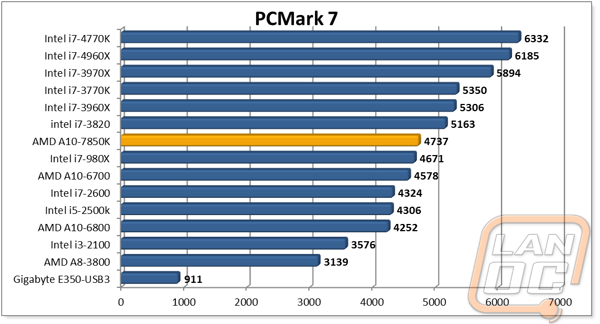 Cinebench has to be my favorite benchmark when doing CPU testing simply because it benchmarks overall CPU performance as well as single core performance. This can be substantially different sometimes when a 6+ core CPU might be fast but at a per core level slower than other CPUs. This benchmark was a little interesting when compared to the results for the other APUs that I have tested in the past. The overall results were an improvement over the previous APUs but interestingly enough the 6800 and 6700 both performed better in the single core mode. The reason for this is because of their higher base clock speed in combination with an even higher turbo clock speed. The 7850K has a clock speed of 3700/4000 where the 6800 had a clock speed of 4100/4400. The increased cache helped the 7850K keep up, but it couldn’t overcome the extra clock speed in this case. 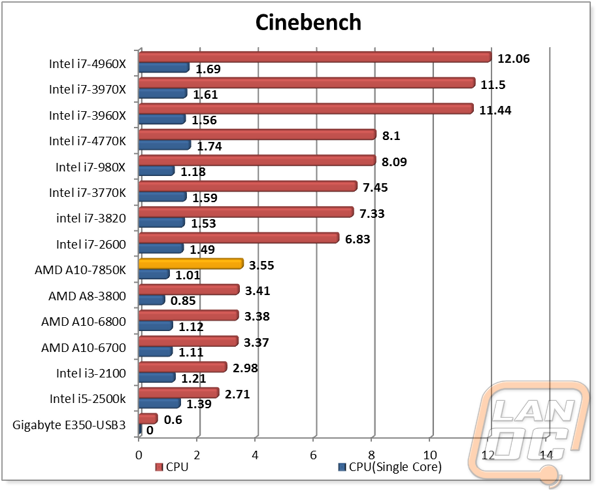 Our Passmark results shows that the improvements in L1 and L2 cache but drops in clock speed aren’t going to give a performance increase in every test we run. It is very depended on the benchmark’s focus. 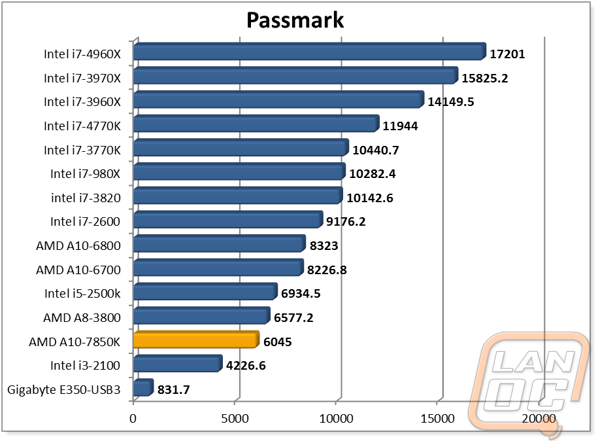 For those of you who spend a lot of time encoding low performance can add up over time. X264 HD shows us the encoding performance of the A10-7850K was slightly faster than the A10-6800 but still not up to the level of any of Intel’s quad core processors. This is more than enough performance for lite encoding but if you intend on doing encoding often the 7850K may not be the best choice. 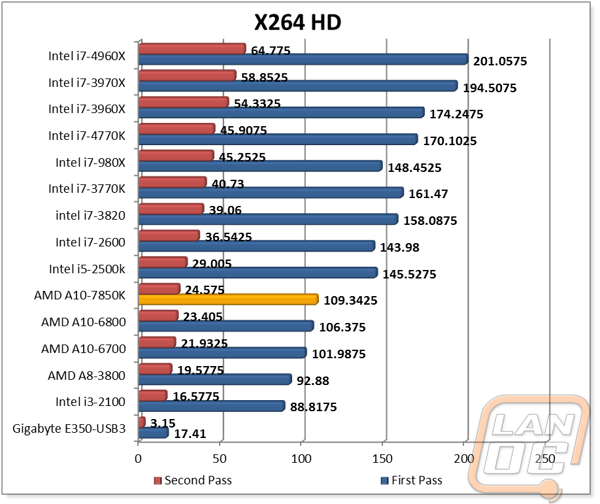 wPrime is a benchmark that a lot of overclockers put to use to compare performance and I completely understand why. You end up with simple-and-easy-to-compare results where the lower the score the better. The A10-7850K’s performance was a major improvement over the A10-6700 and A10-6800 but is still slightly behind Intel’s 4 core CPU’s from a few years back, namely the highly popular i7-2600. 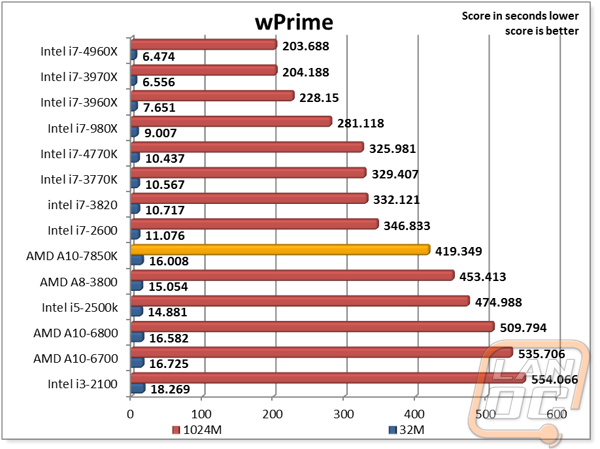 One of our newest benchmarks is the power usage benchmark. Much like on our video card reviews I ran each testbench’s power through our Kill-A-Watt to monitor their wattage usage. Idle results are in windows with nothing running. To get the load results I put the CPU under load using wPrime and recorded the peak wattage. Not surprisingly, the 3970X and 4960X both pull the highest idle and load wattage. What did surprise me was that the i7-4770K managed to outperform the A10-7850K slightly under load and by a large margin at idle. The load numbers for the A10-7850K are still very respectful but it obvious that AMD still has a little more room to improve in the future. 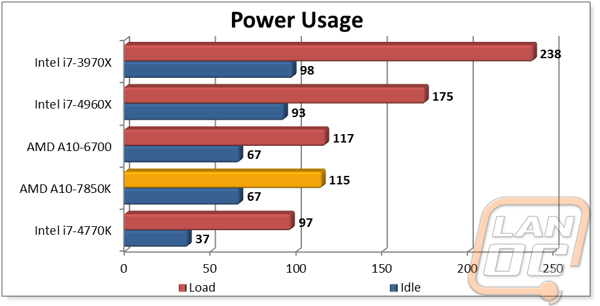 We have 735 guests and one member online