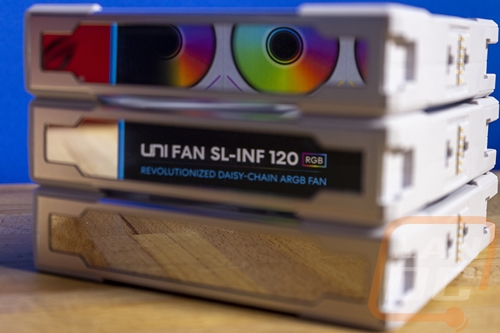 Before getting into performance for the Lian Li Uni Fan SL-Infinity 120 RGB Fans I hooked everything up including the controller and jumped into the software to get things set up. The main landing page for the L-Connect 3 software which is Lian Li’s software shows us that they have expanded past just controlling their Uni-Fans with it. The landing page has your system info from CPU, RAM, and GPU usage, clock speeds, fan speeds, and temperatures, and also your storage and network information as well. The fan speed page now also includes the mention of pump/fan on it and on that page, we have the four ports on the controller listed. Each port can be set to a different fan profile and you can change what device it is tied to for temperatures as well which is great. In the bottom half of that page you can pick from a list of fan modes or on the right you can create your own fan profile or set a specific speed across the board. 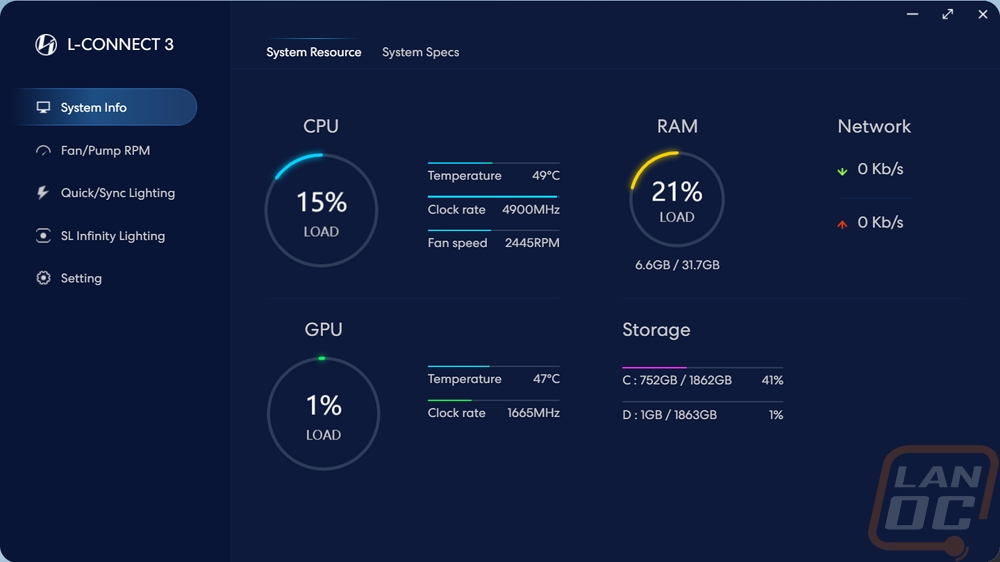 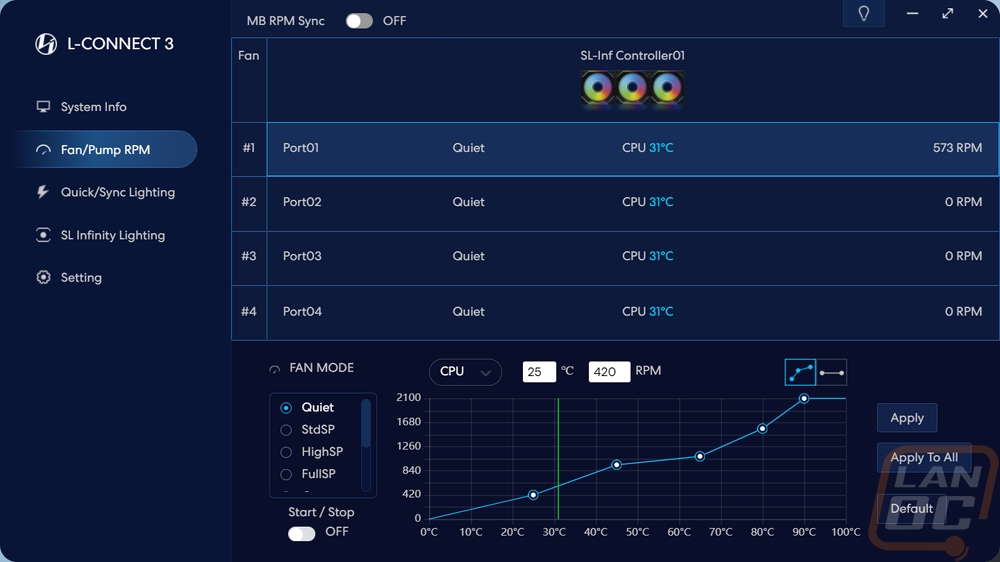 The Quick/Sync lighting page has a case picture and here you can quickly set up an LED mode along with setting its speed and direction. 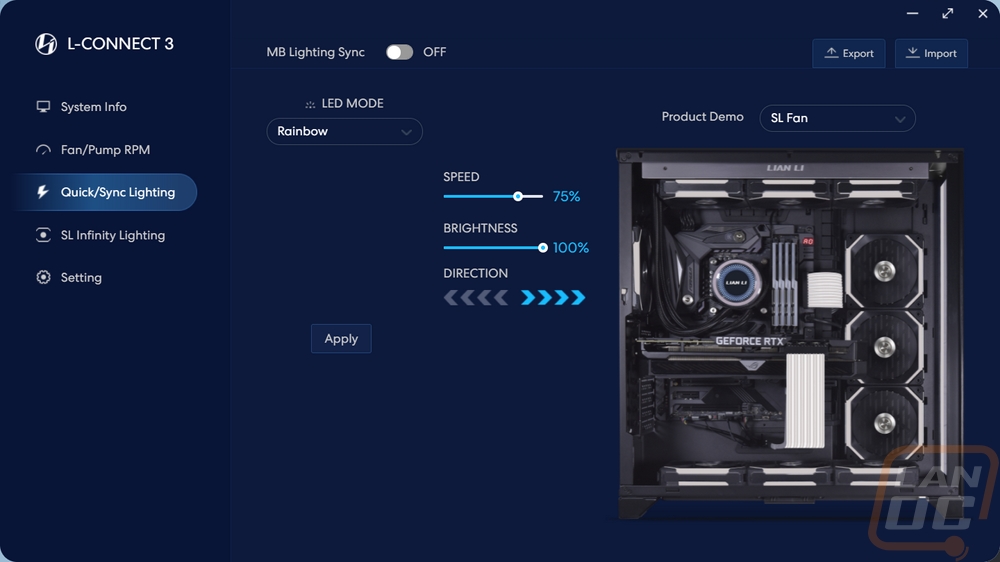 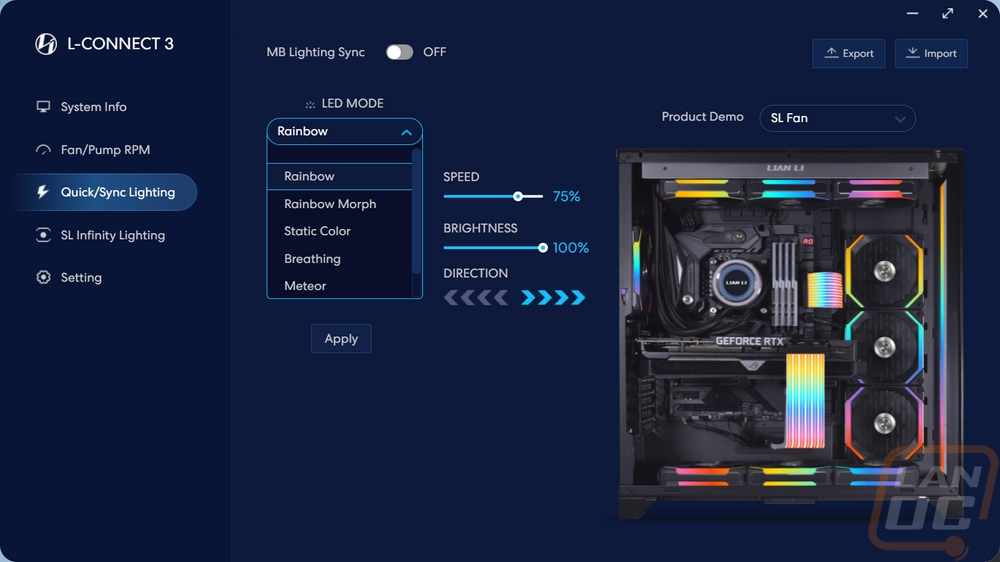 Then the SL Infinity Lighting page is where you can dive into more detailed control. This has all four ports on the controller shown and you can set different fan speed modes and LED modes for each port here not just the entire system. There are a LOT more lighting effects on this page as well and for a lot of them you can get into more detail like setting up the colors that are being used 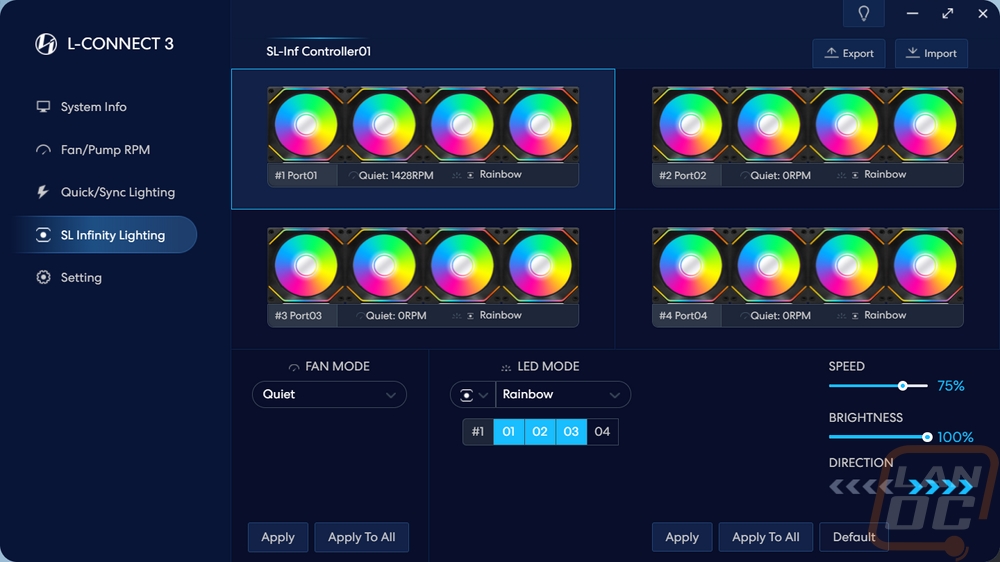 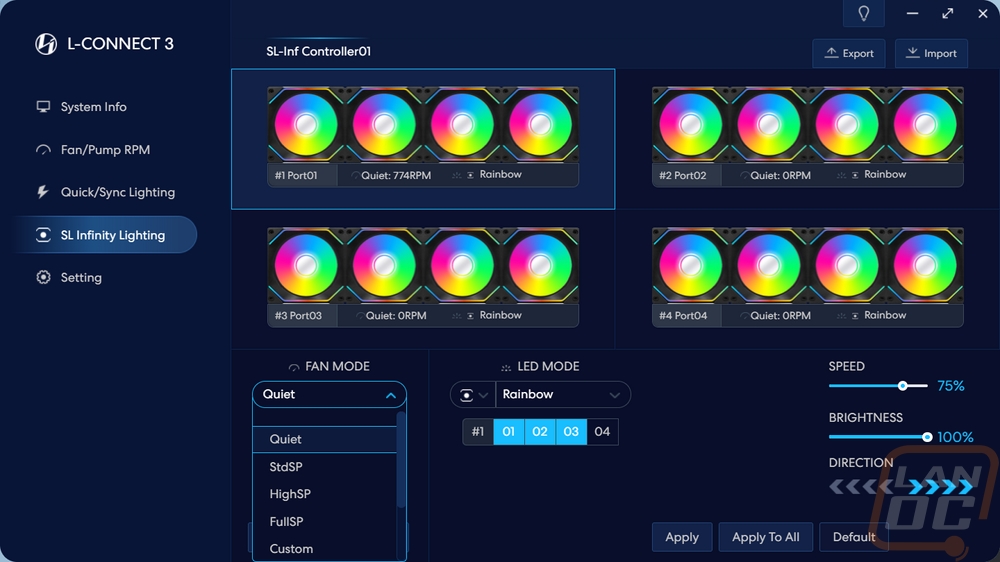 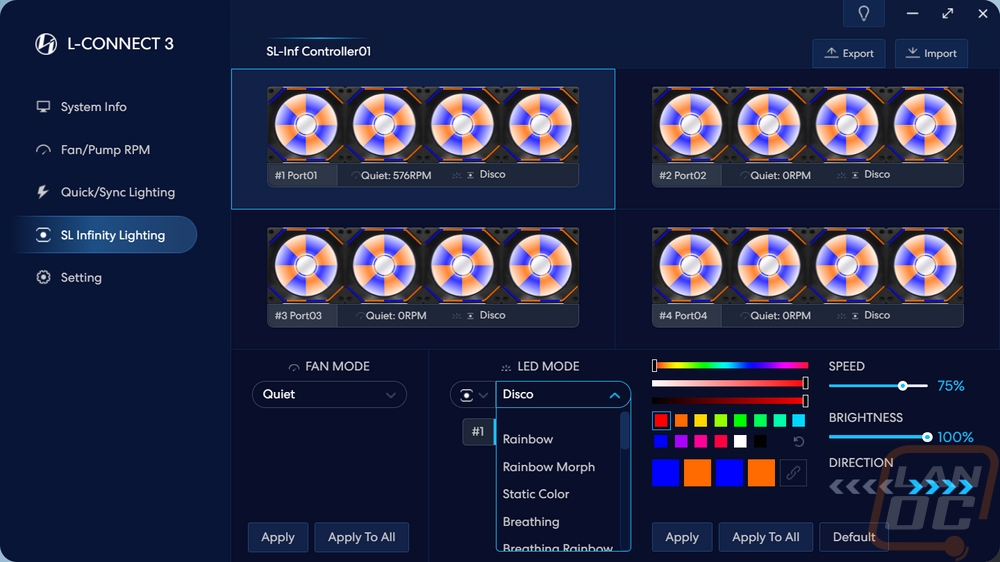 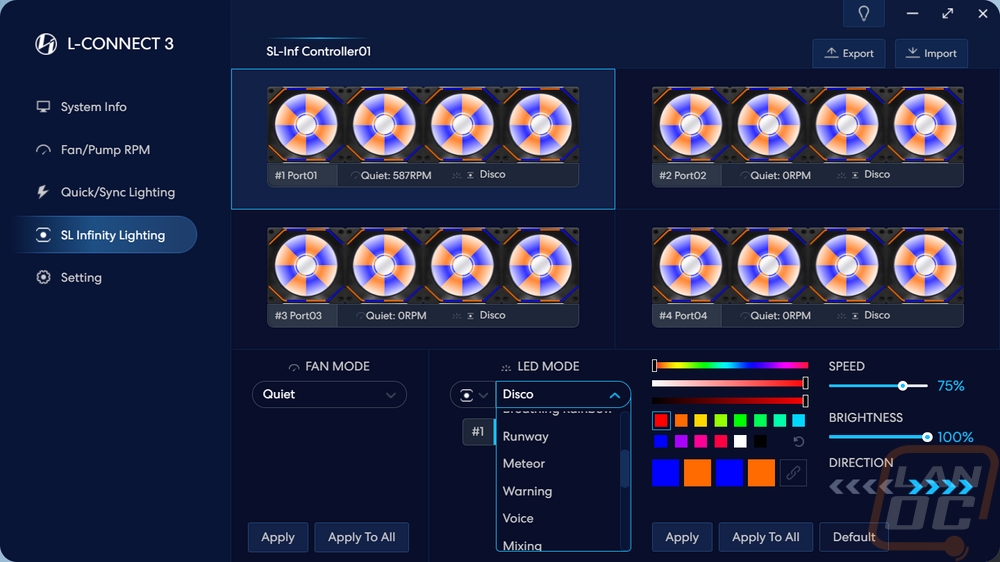 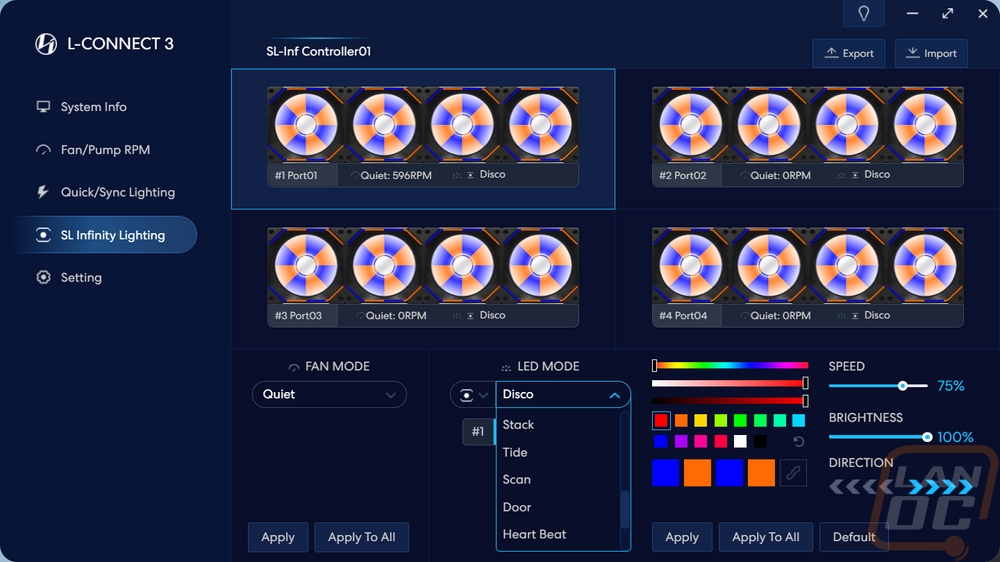 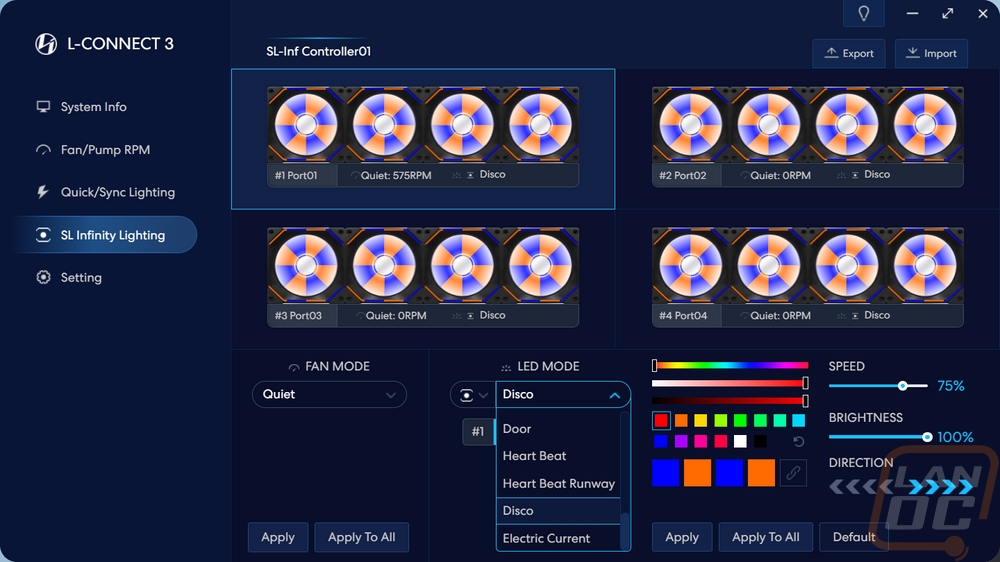 The Setting page has a few tabs up top but for the most part, there isn’t too much going on here. You can set the software to run on windows startup and minimize it all of the time as well. You can pick your language and temperature readout as well. Beyond that, you can let it know what devices you are running when it comes to fans so the lighting controls know the number of LEDs in the fan and you can check for updates on the update tab. 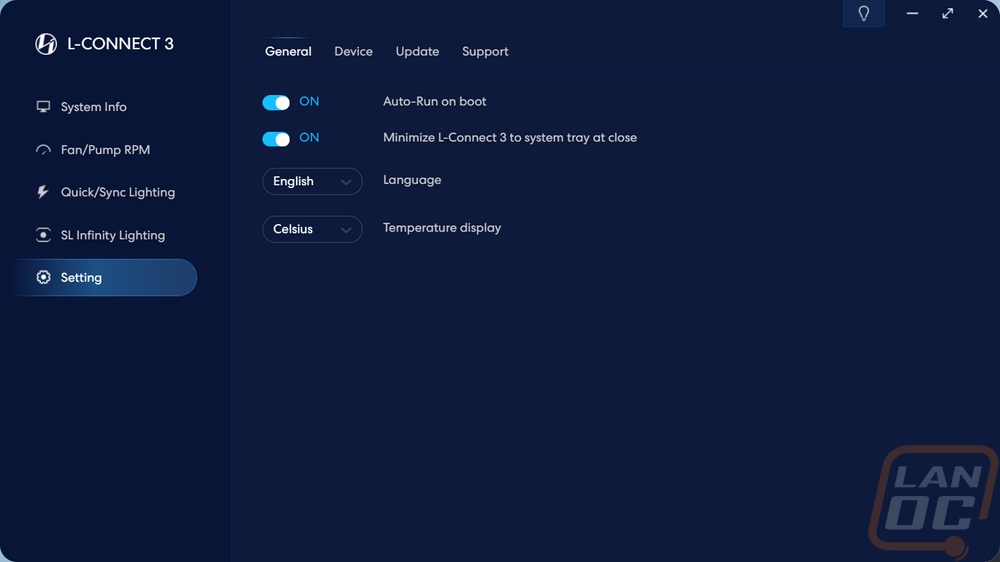 For performance testing, I did noise testing of the three fans with a decibel meter setup 18 inches away. I tested using the four different speed settings in the software using the controller. I tested with a standard A weighting on the meter and then again with C weighting. With A weighting it cuts out some of the higher and lower frequencies similar to how your ear would, this page right HERE explains it more with graphs showing the range. I was surprised for one just how slow the RPM of the fans were when running in the quiet setting but that and the standard speed settings did a good job as far as noise goes. At full speed with all three fans running at 2100 RPM are loud though, thankfully the software does give options to avoid that with custom profiles and the premade profiles.

In addition to checking out the noise performance on the Lian Li Uni Fan SL-Infinity 120 RGBs, we did also need to look at the lighting as well. Especially with esthetics being such a big focus with them. Each fan has a total of 40 individually addressable RGB LEDs in them. Lian Li has LEDs inside of the center of the fan blade to light that up and also light up a ring around the back. Then both sides of the fans have diffused LED strips along the top and bottom edge. But what sets the Infinity fans apart from the rest is the mirrored area on the top and bottom edges which have LEDs around the outside edge of the two-way mirror design that gives that infinity effect of the lights going down an infinite hole. 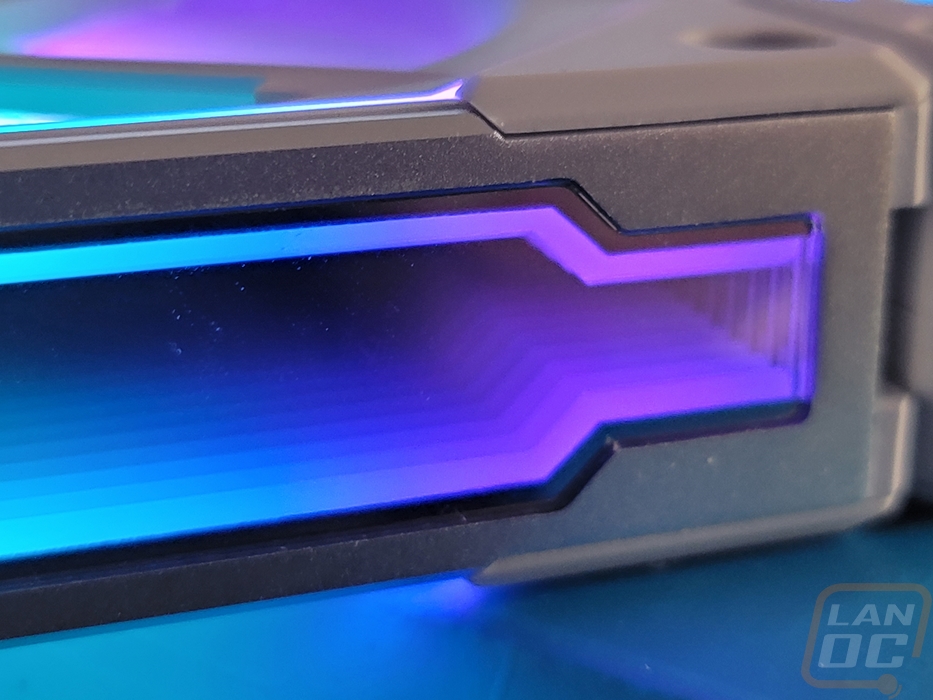