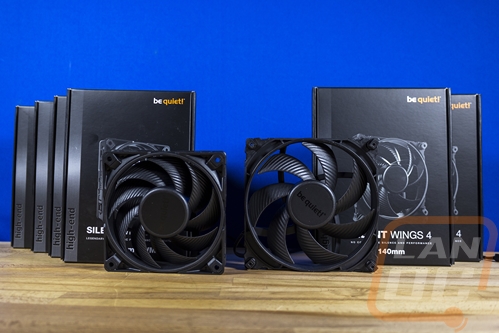 For performance testing of both of the Silent Wings 4 models that Be Quiet sent over, we don’t have the capabilities of testing the static pressure and airflow but I did want to at least get a look at the noise levels that each fan runs at because noise is a big concern for me in any build in the office. Our readings won’t match up with the specifications or anyone else's because everyone has different ambient noise levels but for comparing from fan to fan it should give us an idea of things and my expectations are high given the Be Quiet reputation and the pricing as well. I set up our meter 18 inches away and ran both fans with the PC outputting 100 fan speed and for the Silent Wings 4 pro 120mm PWM I also tested at all three of the fan speed settings using the switch on the back. I tested with a standard A weighting on the meter and then again with C weighting. With A weighting it cuts out some of the higher and lower frequencies similar to how your ear would, this page right HERE explains it more with graphs showing the range.

My initial impression even before looking at the numbers was just how quiet the base 140mm was with it running at just 1100 RPM, I didn’t really hear it at all with the ambient noise in the office. To add to that, that model comes with an adapter to slow the fan speed down even more. The pro 120mm, on the other hand, came by default on the medium fan speed setting where it runs at 1600 RPM and while the decibel difference is small I could hear it slightly. Once I turned it up to the second setting which they call high-speed mode at 2500 RPM it was much louder and at 3000 RPM it was even higher with both of those modes having more of a high-pitched sound. They were quieter than any other 3000 RPM fan I have tested, but no matter how quiet you go at that fan speed there is still going to be some noise. But this is also what I like about the Pro model, you can run at the low setting most of the time and it will be quiet but you do still have the option to crank things up if needed.