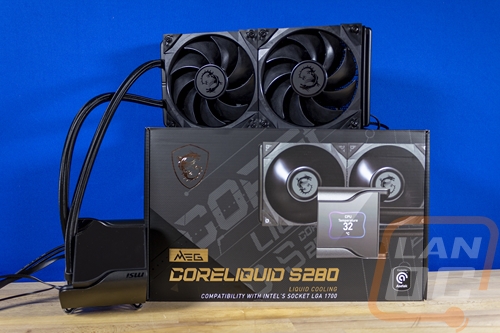 With everything set up, I could then jump into the rest of the performance testing with cooling performance. For this, we are running the Intel i9-12900K and except for the one test, the PL2 is set to the default 250 watts. To heat things up I used AIDA64’s Stress Test which has two different CPU workloads, one they call CPU and the other FPU. FPU focused on AVX instructions and is a significantly heavier workload, it is very similar to how a render would affect your PC where the CPU workload is more like how normal daily use or gaming would work the CPU when at 100% load. My first test was with the FPU stress test and I tested the CoreLiquid S280 with the stock fan profile which was the balanced in the software and again with the fans and pump turned to 100%. The CoreLiquid S280 did well with the stock profile, being the first out of the coolers tested under 90c with its 80c. Turning the fans up didn’t change things at all though it ran up to 89c there as well.

My next test was the same test, but this time around I uncapped the wattage that the CPU would pull, and using hwmonitor I documented the peak wattage that it reached. Here the better the cooling the higher the wattage will go. This also helps us see coolers that are underclocking due to thermals. The CoreLiquid S280 let our 12900K reach 273 watts which was one watt higher than the CoreLiquid C280 which has the same radiator/fan size.

Last up I switched over to AIDA64’s CPU workload on the Stress Test. Unless you are rendering, this is what you can expect to see in day-to-day use so this is the most important to me. The CoreLiquid S280 with the stock fan profile which as a reminder was the quietest tested was also the coolest of the coolers tested. Turning the fans and pump all the way up did help cool things down here going from 62c to 57c which matched the performance of a few of the other coolers.