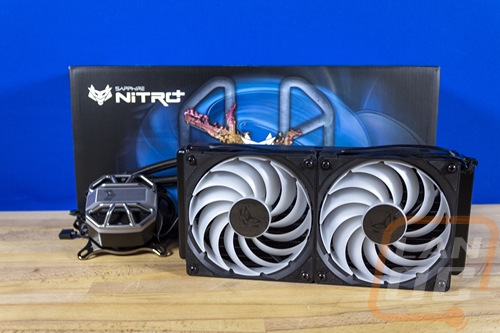 The packaging for the Nitro+ S240-A had a similar shape to the MSI cooler I recently took a look at and Saphire has done up the exterior of the box with bright blue shapes including the Sapphire S shape on the black background of the box. Then in front of that, they have a weird shape on top that matches the shape on top of the Nitro+ S240-A pump with RGB colored water and the Nitro+ logo in the center as well as the logo and branding in the top left corner. The model name itself is mostly hidden away in a smaller font in the bottom right corner. Then on the side of the box, Sapphire has an actual picture of the cooler all lit up with its lighting which I think would have been better to have up on the top. Then next to that they have line drawings of the radiator, fans, and pump/block with dimensions as well as a full specification break down.

When you get inside they have a welcome message that talks about the fan blade design and the pump features. This seems like information that could be useful on the outside of the box as well for anyone shopping in retail. This flap would be better used with a real welcome to the club kind of message as people open up their new cooler. Under that flap, everything inside of the box is tucked away tightly with a formed cardboard tray and most everything else is bagged in plastic or in a cardboard casing like the fans to keep them from being scuffed up. The Nitro+ S240-A documentation is right up on top so that it is easy to get to before you dig into everything else. 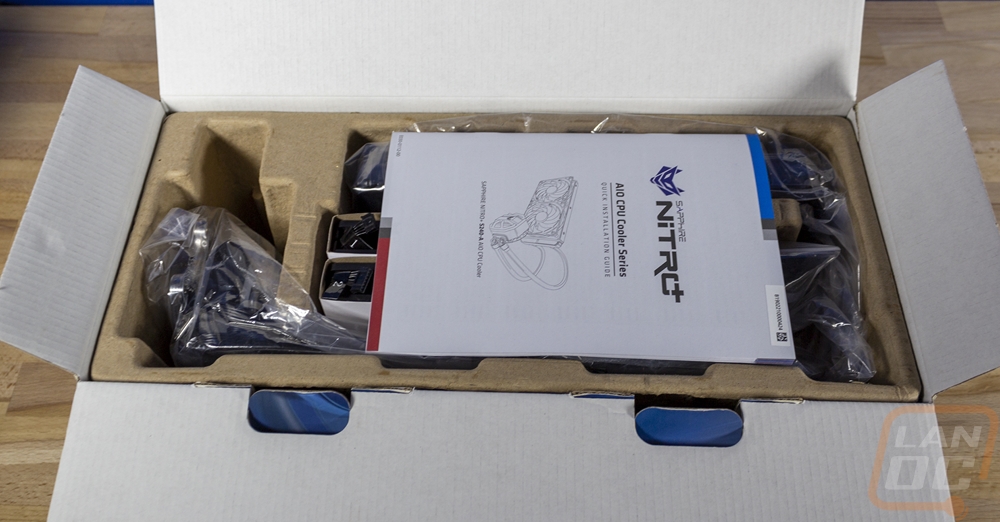 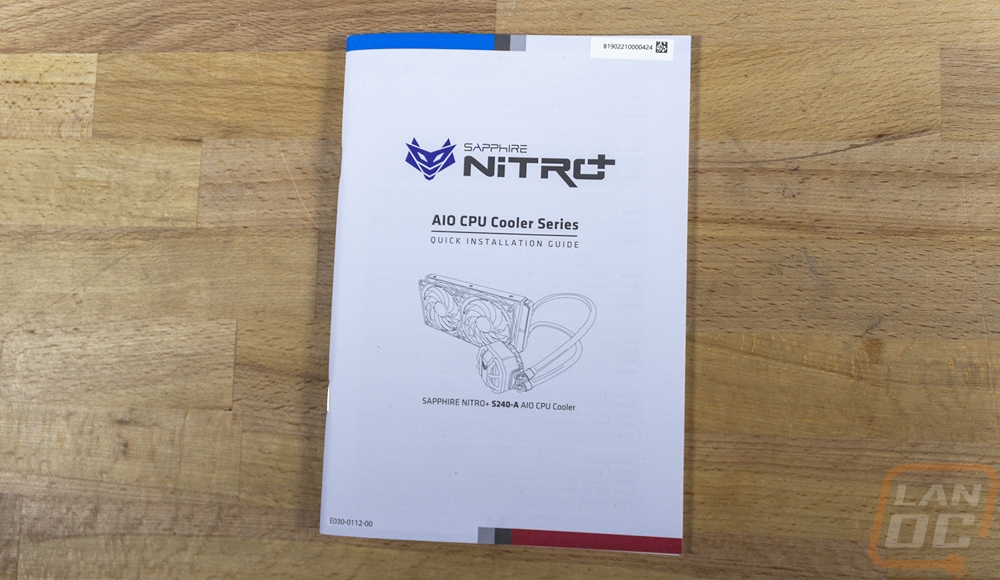 So AIO coolers don’t have a traditional heatsink like a video card has so Sapphire isn’t able to translate their experience there. But they do have a LOT of experience with fan designs on video cards so it’s not a surprise that they would put extra focus on them with their first AIO design. In fact, the two 120mm fans that they went with have a blade design that looks the same as what they use on their Nitro+ cards. They have a 12 blade axial design with a lot of twist to the blades. They are a translucent white for the RGB lighting. Then on the outside, they have an outer ring that links all of the blades together for strength. Then on the outside, they have a traditional black housing with rubber pads around each of the four mounting holes to cut down vibrations. In the center, they have reflective stickers that have the Nitro+ logo.

Around on the back, I thought I would find Sapphire branding on the back but these are listed as FirstD fans. They have the model number FD1225H12D which is also the same model number that Sapphire's last liquid-cooled GPU had for its fans as well even though the blade design is different. The black housing is mostly traditional on the outside but I did notice a few of the corners have smaller wire management tie does as well to tuck wires against the fan. 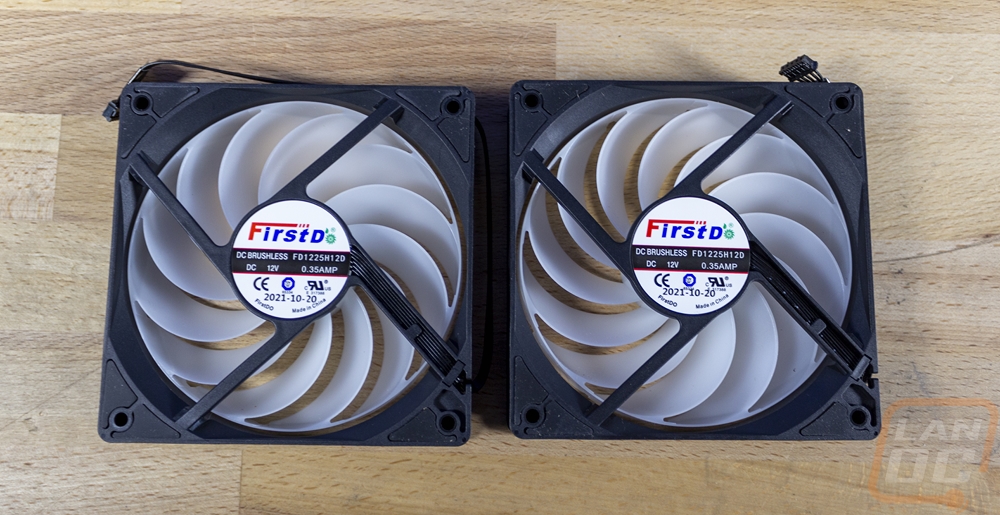 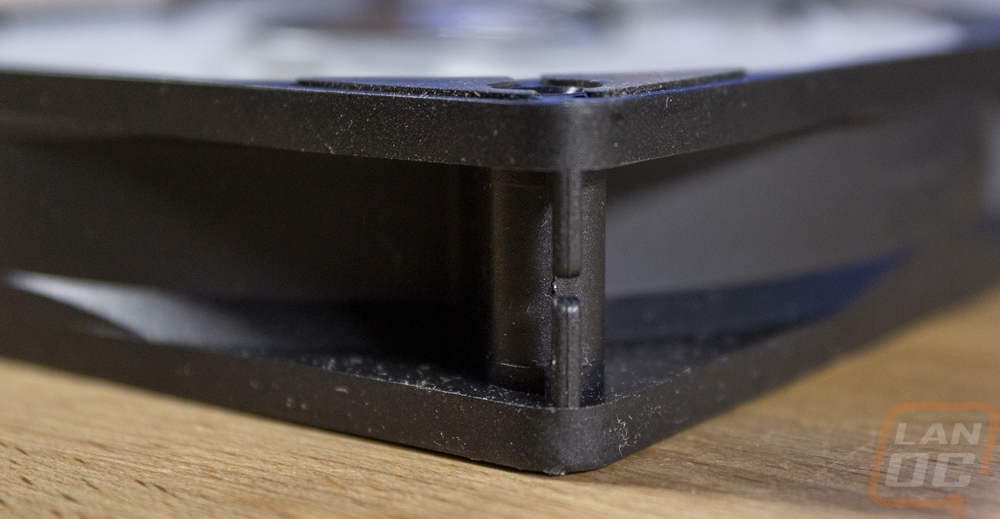 The biggest thing about these fans is that they have a single wire design. I’ve been pushing for this a lot with all of the RGB fan designs. Having multiple fans with each having a normal fan and then an RGB cable makes a big mess for wiring. This helps cut down on that and the fans are both labeled and both have different length cables as well to help even more with keeping things clean. The only downside to this design is that replacements will be hard to find unless Sapphire continues with this design and brings more out in the future.

So the radiator comes decked out in extra protection in addition to being in a bag inside of the tray inside of the box. It also has a plastic film around it on the outside edges and then on one side they also had hard plastic trays covering the fins as well. Those were a pain to take out but it is interesting that they went that far to keep things protected. The radiator design has rounded ends like we have seen a lot in the past. Most newer AIOs have been moving to the boxy ends that look a little better. But size wise this is the same 27mm thickness as nearly all AIOs have. It also has the Asetek branding right on it which I’m surprised they left on, but that is the “standard” AIO OEM so it's not a big surprise to see that they made this. 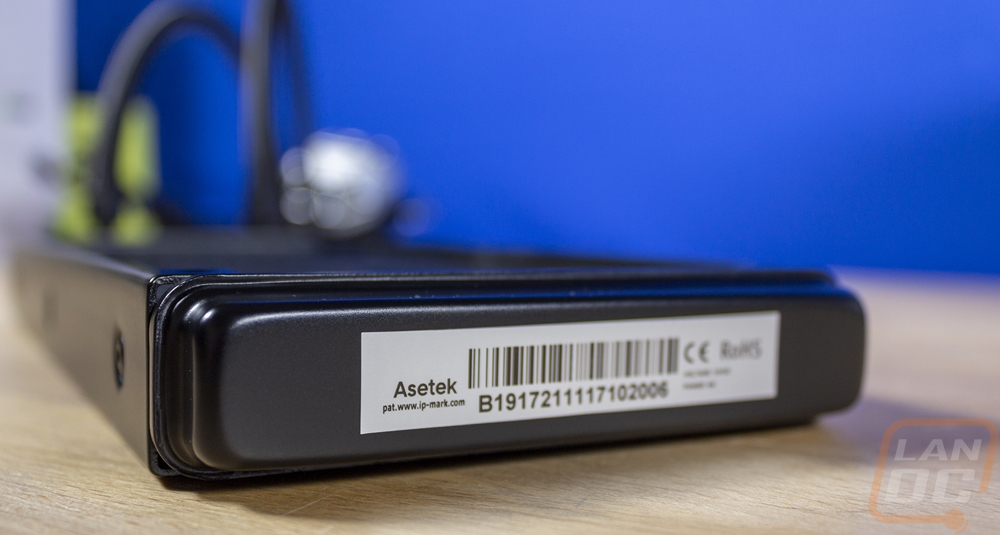 For tubing, the Nitro+S240-A has EPDM tubing with a black mesh sleeving on the outside. The tubes are 400mm long and are around 10mm thick. They have the plastic straight fittings at the radiator and adjustable 90-degree plastic fittings at the pump. 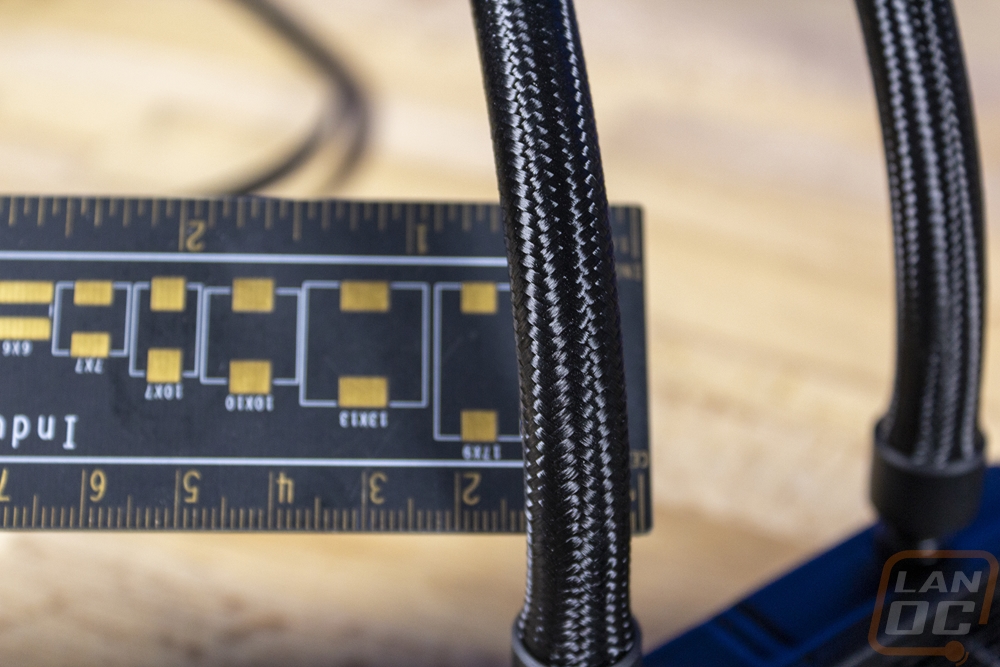 So that design that we saw on the top of the box is the same shape to the tubing-like cage on top of the pump/waterblock on the Nitro+ S240-A. They have given the plastic cage a silver finish then in the center, they have a stripe with the Nitro+ logo on it. If you look closely you can see the white translucent areas here that are backlit with RGB lighting along the center section and they also have lighting around the outside edge as well. This cage does add a lot to the overall height of the pump/block, however. The bottom of the pump is the other giveaway that this is an Asetek design. The twist on mounting bracket is their traditional design. The contact surface is round but just large enough to cover the entire LGA1700 die though some of the mounting screws will be over it so you have to make sure you have enough thermal paste. Speaking of which, normally I would love that thermal paste comes preinstalled, but with AMD always having a larger CPU and Intel now going larger as well I do wonder if this is enough for those situations. With the paste off the copper contact surface does have a decent finish compared to a lot of other AIO coolers with a slight mirror but you can still see some machine marks on the surface. 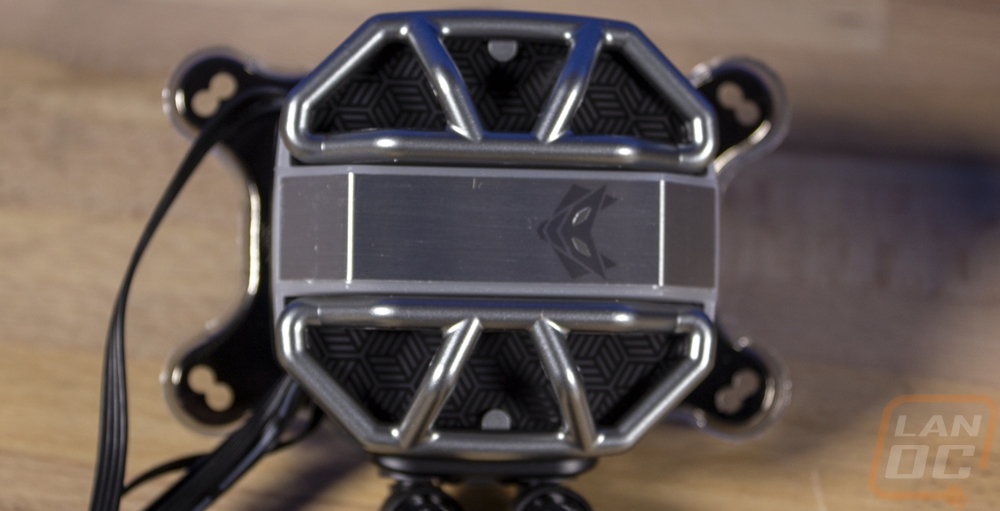 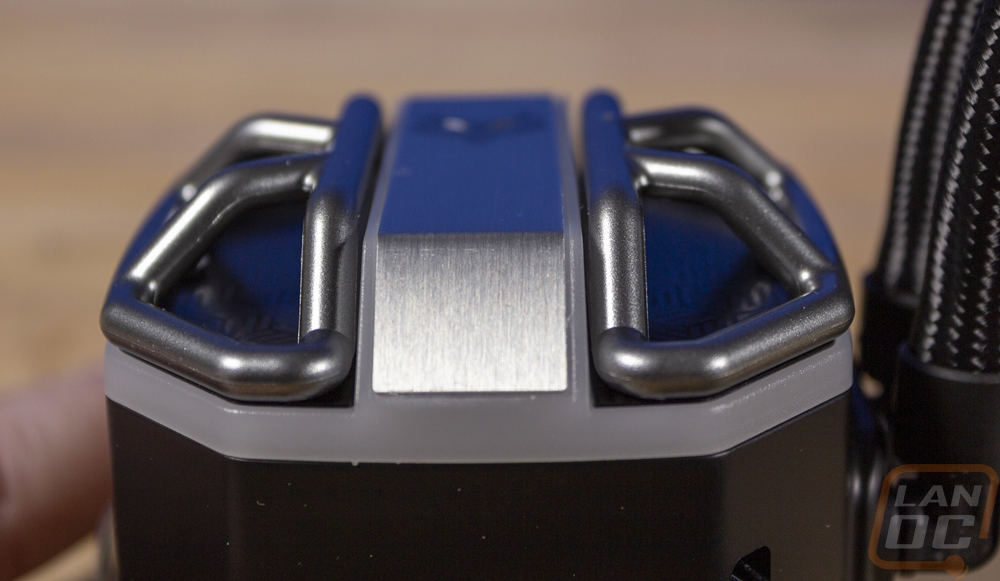 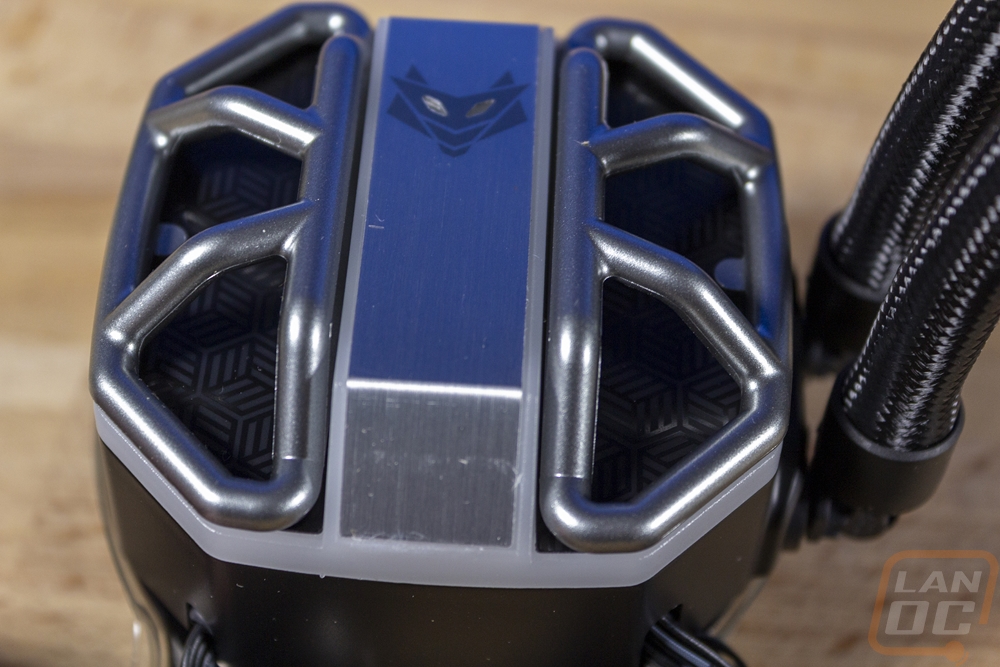 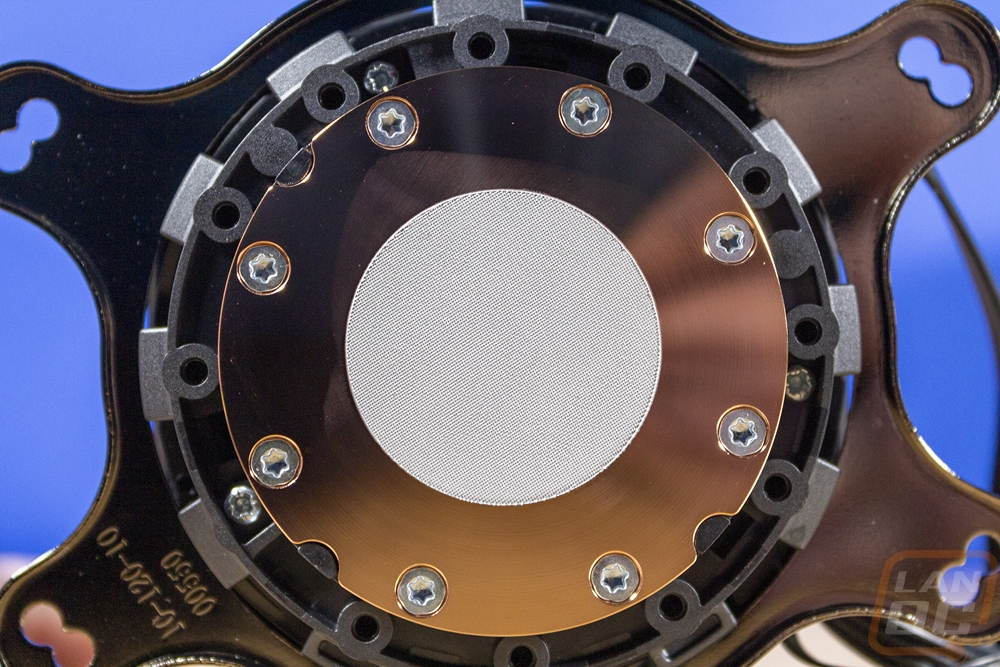 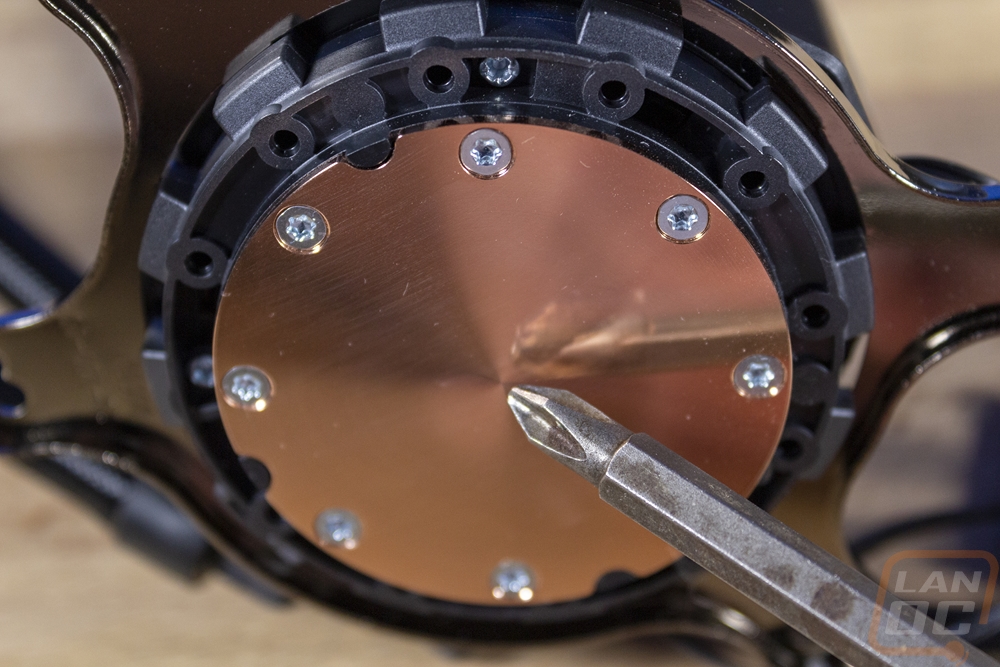 Here is the bundle of wires that come attached to the pump/block. Unlike a lot of AIO coolers with RGB lighting, the Nitro+ S240-A doesn’t use a separate controller for everything. This has a few pros and cons. Wiring is a lot less complicated, especially with the combined wire design on the fans. They also don’t connect via USB, going with hooking the addressable RGB lighting right up to the motherboard or any other controller to keep things simple and to not have to require software for your AIO cooler. But the downside here is that you do have a lot more wires all in the area of your CPU to have to clean up. 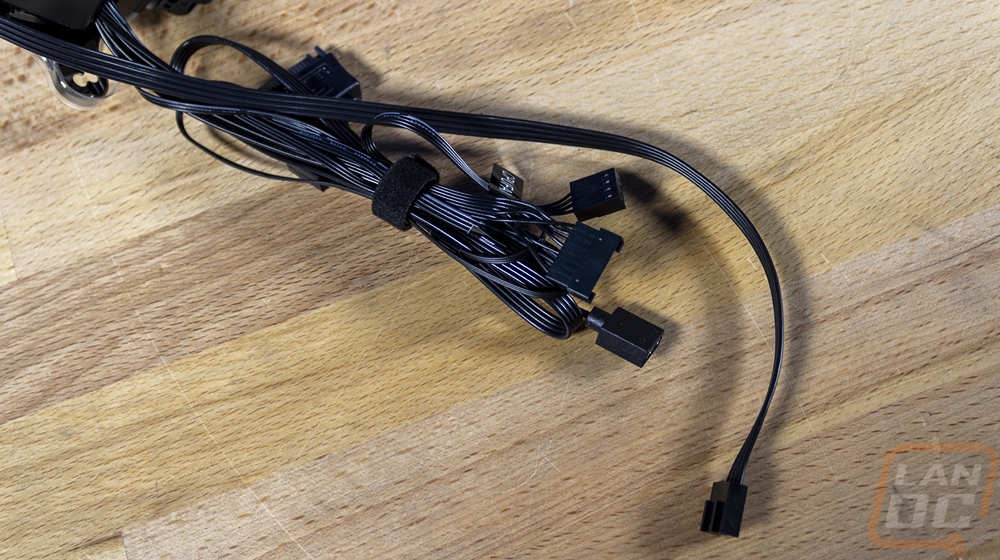 As for the rest of the accessories included with the Nitro+ S240-A. You get bags labeled specifically if you are running LGA1700 or AM4. Then there is a bag with all of the radiator mounting screws and washers which gets you 8 long through fan screws and 8 shorter direct mounting screws. Then the Intel 2011 and older 1150 like mounting hardware is all in one bag along with the thumbscrews you will need for any installation. I do wish at least one of these had their own reclosable baggie because if you are running AM4 or LGA1700 you will have to open the main bag to get the thumbscrews but you won’t have a bag to put those back in other than the main big bag that all of the accessories came in. They also include the universal Intel top bracket and bottom bracket. Then there is one more cable. This is the cable for the fan wiring and it had hookups for the two fans that the Nitro+ S240-A uses or the three fans on the Nitro+ S360-A. The cable has flexible black wiring inside of a black mesh sleeving. 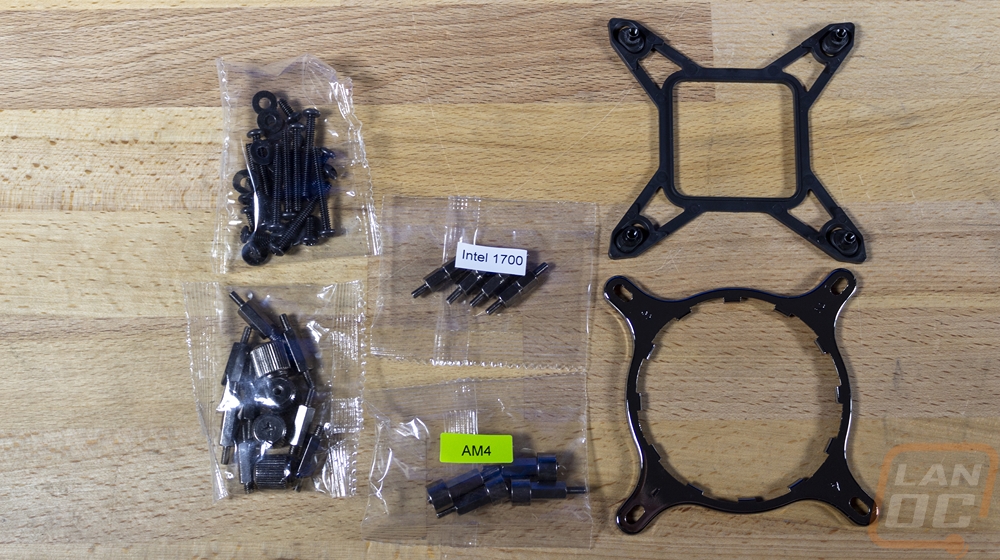 The Nitro+ fans were easy to mount to the radiator and look good installed with a unique design that does look more like a GPU fan than a case fan. The thin and custom-length wiring also looks great. It's hard to see here but I have both wires run down to the one end and tied to the fans using the built-in hold downs. 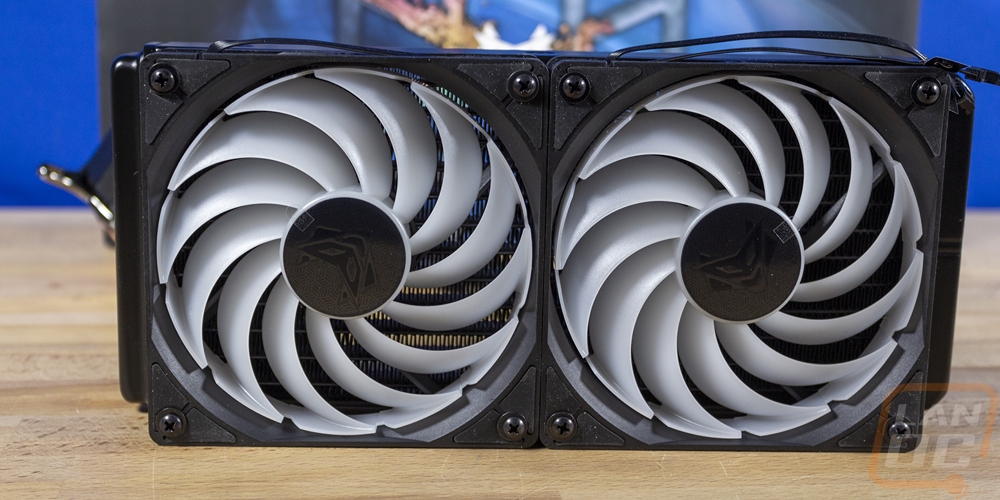 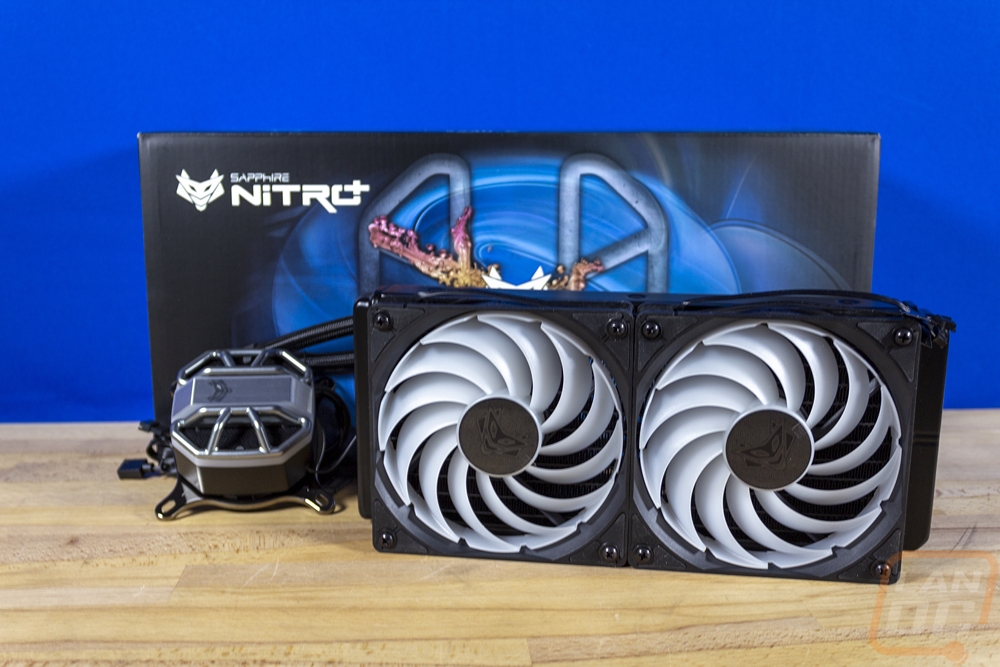 We have 1094 guests and no members online