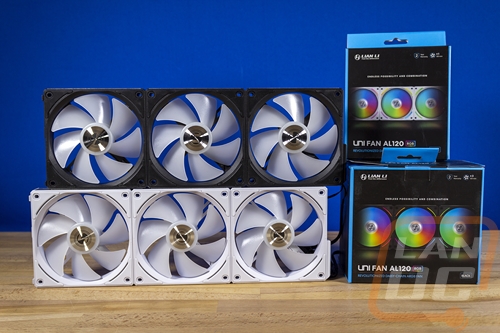 So when compared to the previous SL series of fans, the AL120’s are a little closer to being a traditional fan. They are now back down to normal fan sizes which means they are less likely to have fitment issues and with that, the fan blades don’t look undersized. Lian Li upgraded the fan performance with more CFM and static pressure which is good because this design complements a nice water cooling setup. Lian Li also leaves options depending on how you want to control everything. You can use their software or you can link everything into your motherboard and use its software to handle everything. All of the Uni Fans have a very unique feature which allows you to latch them together. This passes all of the wiring through fan to fan and cuts WAY down on the number of cables needed for everything. If you have ever used any other RGB fan design where each fan has two sets of cables all going it can add up quickly and with these, you can cut that down to just one pair of cables for up to four fans.

The new slimmer fan design for the uni Fan AL120’s does lose a little bit of the high-end effect that the SL120’s had with their thick aluminum sides. But the new fans do still integrate machined aluminum sides and they now have cleaned things up even more by dropping the sticker you would normally find on the back of the fan for a machined panel. The back of the fans doesn’t look like the back of the fans anymore which is great. They have both white and black color options to go with any build type and overall the lighting looks amazing with the entire fan blade being lit up then smaller accents on the outside edge on both the front and back of the fan.

I do wish that the white fans which have a nice matching white adapter also had white cables. It’s a small detail, but I know the black-sleeved cables will stand out like a sore thumb in an all-white build. My other complaints about the fans were all on the software side of things and still mostly trivial. Lighting effects can’t be slowed down anywhere close to as slow as I would like to slow them too. Even when setting them to 0% speed they run extremely fast. Then there are a few other small details in the software like having to tell it how many fans you have each time you set up an effect that could be improved.

Overall I think the Uni Fan AL120’s will do a great job complementing the SL120’s in Lian Li’s lineup. These offer a different lighting effect giving people options while still allowing them to cut down on their wiring with the unique latching fan design. Lian Li has raised the pricing slightly, the original SL120’s were available for $79.99 with an extra discount at launch and $24.99 per extra fan where these are now $99.99 and $29.99. But given the popularity of the original launch and that these now light up the fan blade itself I don’t think the cost is too high. Well at least not compared to the competition. Corsairs options for example have an MSRP of $129.99 for a similar 3 pack. 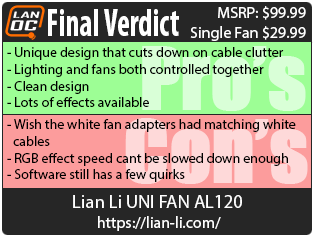 You might call him obsessed or just a hardcore geek. Wes's obsession with gaming hardware and gadgets isn't anything new, he could be found taking things apart even as a child. When not poking around in PC's he can be found playing League of Legends, Awesomenauts, or Civilization 5 or watching a wide variety of TV shows and Movies. A car guy at heart, the same things that draw him into tweaking cars apply when building good looking fast computers. If you are interested in writing for Wes here at LanOC you can reach out to him directly using our contact form.
Discuss this article
Log in to comment
Posts in discussion: Lian Li UNI FAN AL120