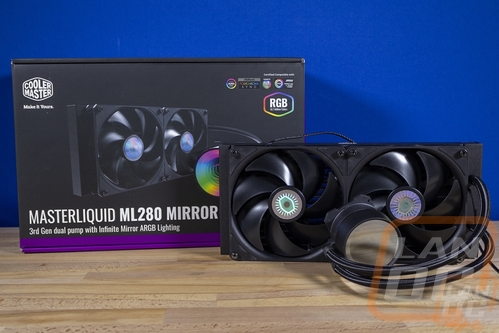 So going into this I was curious if Cooler Master, who has been in the AIO cooler game from the start, still had it. Their new Mirror series of coolers are cool, but they aren’t the only company going that direction. They weren’t even the first one I personally have taken a look at. So I was really curious if they were still above the competition when doing the same thing. I wanted to find out how the ML280 Mirror performed, see what Cooler Master did differently, and then here shortly I’m also going to see how its pricing fits in the market. For the performance, there were times where the ML280 outperformed, but in around the same number of times it also came in behind the 280EX as well, meaning for cooling performance it was a dead heat. That isn’t a huge shocker, with AIO coolers until you start seeing copper radiators a lot of the performance is going to be the same when it is size for size. Of course, fans make a difference there as well and Cooler Master ended up going with their SickleFlow 140mm fans which are lower on RPM than most of the competition but performed well. Especially when it came to noise performance where the lower RPM and Cooler Masters experience helped things stay surprisingly quiet. The fans have a very high expected life if their specifications are to be believed.

I thought their styling was a little plain even as someone who always likes a good blacked out look. The stickers in the center are too bright to go with their blacked out look, but the rest of the fan is too boring to be anything else. Given the great looking addressable RGB used in the infinity mirror top on the pump, I’m surprised they didn’t go with RGB fans to stick with that theme. Speaking of the RGB lighting, I love that you can hook it up to your choice of motherboard with the standard connection. I also like that they included a controller for those who can’t or don’t want to do that. But be warned, that controller will get you red, green, and blue along with one cool effect. You will need to use your motherboard if you need to get any more than that out of the lighting.

Installation was especially easy on our AMD testbed which is great considering how many times I have to swap it out. I also like that the brackets are tinted dark as well, Cooler Master has been known to skimp out and have chromed brackets that stand out like a sore thumb. My other issues were with the overall contact surface. It is as far from a mirror finish as you can get so quality thermal paste applied correctly will be very important there. I also have the pump thickness down as a con as well. It is thinner than the competition when it comes to the Castle 280EX, but because of the dual-chamber design as well as having the lighting and infinity mirror on top it is thicker than your “standard” AIO. It isn’t a huge deal, but keep it in mind if you are building in a compact system.

So what about the pricing? Well our 280mm Master Liquid ML280 Mirror has an MSRP of $134.99. For competition with a similar mirrored pump top, you have the NZXT Kraken X63 and X52 which the X63 sells for $150.99 and the X52 on Newegg is a crazy 214.40 right now. The Castle 280EX that I tested against the ML280 sells for $149.99 as well so the ML280 is priced below the competition. Though I do think the Kraken’s may come with a slightly higher quality fan which I think makes the ML280 priced right where it should be. Overall, if the addressable RGB inside of an infinity mirror is the look you want for your build I think this is a great choice. Though I do think a similar version but with RGB fans would be a great addition. 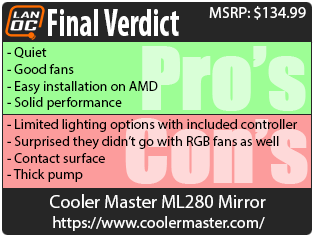 You might call him obsessed or just a hardcore geek. Wes's obsession with gaming hardware and gadgets isn't anything new, he could be found taking things apart even as a child. When not poking around in PC's he can be found playing League of Legends, Awesomenauts, or Civilization 5 or watching a wide variety of TV shows and Movies. A car guy at heart, the same things that draw him into tweaking cars apply when building good looking fast computers. If you are interested in writing for Wes here at LanOC you can reach out to him directly using our contact form.
Discuss this article
Log in to comment
Posts in discussion: Cooler Master MasterLiquid ML280 Mirror