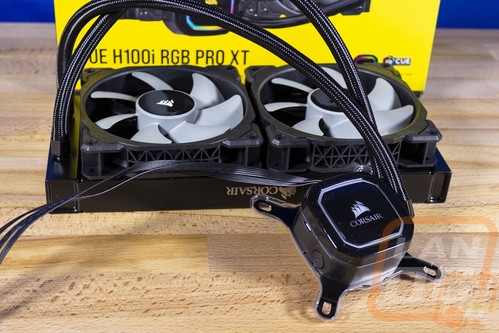 When it comes to All in One water cooling Corsair has been a go-to name for years now and the H100i RGB PRO XT just proves that they have continued to improve things on each new iteration. The Pro XT ends up finding a home in between the H100i Pro and the H100i Platinum. The Platinum ends up with full addressable RGB fans as well as the addressable RGB on the pump. The Pro on the other hand uses the non-RGB Magnetic Levitation fans and has single color RGB lighting on the pump. The Pro XT that I took a look at today has those same non-RGB fans but stepped up to addressable lighting on the pump like the Platinum. The Pro XT also doesn’t have the silver accent that the Platinum and the Pro both have. Corsair went with black and I like the blacked out look.

Cooling performance was solid in my testing, even though I did put it up against the NH-D15 on the air cooling side which is huge and runs dual 140mm fans. Speaking of fans, the ML series fans with their magnetic levitation are nice though they did combine with the pump to be noisier than expected when compared to the NH-D15. Thought to be fair the Noctua fans only spin at 1500 RPM where these are running faster. I would love to see the all blacked out ML fans used though.

Now I have the RGB lighting both as a pro and a con here. Having addressable RGB on the pump is an improvement over the H100i Pro which was a solid color. But I would love to see the “Pro” model be completely blacked out without lighting but still offer the quality ML fans.

As for pricing, the H100i RGB Pro XT has an MSRP of $119.99 which is a nice price drop when compared to the H100i RGB Platinum’s MSRP. I have to mention it being the MSRP though because at least currently the Platinum is cheaper on Amazon. With the gap being $15, the upgrade to the full RGB fans is a lot more enticing. Overall the Corsair H100i RGB Pro XT is a great cooler. But I do hope to see Corsair offer a true Pro model that has the same build quality and components without any RGB at all. 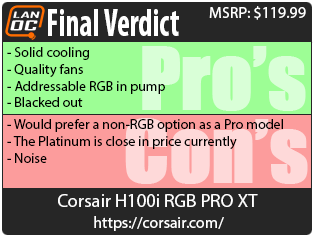 You might call him obsessed or just a hardcore geek. Wes's obsession with gaming hardware and gadgets isn't anything new, he could be found taking things apart even as a child. When not poking around in PC's he can be found playing League of Legends, Awesomenauts, or Civilization 5 or watching a wide variety of TV shows and Movies. A car guy at heart, the same things that draw him into tweaking cars apply when building good looking fast computers. If you are interested in writing for Wes here at LanOC you can reach out to him directly using our contact form.
Discuss this article
Log in to comment
Posts in discussion: Corsair H100i RGB PRO XT

We have 767 guests and one member online