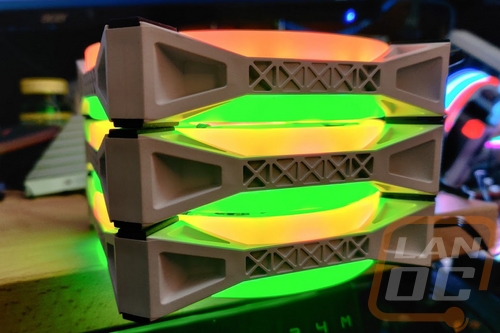 Just like with my original QL fan review with the black model, I had a great time playing around with the lighting effects with the dual-sided dual ring addressable lighting. Now be sure to check out my full review of the QL fans in my original review. But I will say that Corsair only improved things with the all-white frame. Now even when the lighting is off the fans actually match the white RGB light diffusers which looks even better and the white helps the lighting pop even more as well. Now Corsair isn’t the only company with addressable LED fans, nearly everyone has them, but their software does a good job of allowing for lots of control and the ability to tie everything in with the rest of your components. Of course, the lighting is still the QL120’s best feature with it being on both sides and with inside and outsight light rings and a total of 34 addressable RGBs.

My complaints from the original review are all still the same as well. Wiring everything up can be a mess, three fans with two long wires each and the lighting controller as well. I would love to see Corsair tie in the fan control itself into their controller seeing as no one is going to hook their expensive RGB fans up without the lighting. Which leads me to my other complaint, the three-pack of fans is going to cost you $139.99 which ends up being more than a lot of people spend on their case and a good portion of a lot of the other components. Without a doubt, these aren’t for budget builds. I do still like the fan design, especially with the bright white frame!

You might call him obsessed or just a hardcore geek. Wes's obsession with gaming hardware and gadgets isn't anything new, he could be found taking things apart even as a child. When not poking around in PC's he can be found playing League of Legends, Awesomenauts, or Civilization 5 or watching a wide variety of TV shows and Movies. A car guy at heart, the same things that draw him into tweaking cars apply when building good looking fast computers. If you are interested in writing for Wes here at LanOC you can reach out to him directly using our contact form.
Discuss this article
Log in to comment
Posts in discussion: Corsair QL120 White RGB Fans

We have 1188 guests and one member online