With my testing, all finished and having taken a look at the Dark Rock Slim’s features we can finally sit down and run through the good and the bad or the pros and the cons as we normally put it. There were a few things that really stood out to me with the Dark Rock Slim with this being the first time that I personally have tested one of be quiets! Coolers (I’ve have had other writers cover them in the past). For starters, noise performance is off the charts, standing out even next to the Noctua cooler in my testing, the Silent Wing 3 fan is very quiet. They have also perfected the all blacked-out look, long before everyone else finally started bringing out their own blacked-out coolers. The Dark Rock Slim even has painted heatpipes, brackets, and everything else that is visible when installed and they add to that styling with the cover up on top that gives that signature be quiet! look. The Dark Rock Slim is also unique in its size, allowing for better clearance for tall memory, some motherboard coolers, and in a lot of cases the larger Dark Rock 3 wouldn’t fit. BUT you do give up some noticeable performance for the smaller size, as you would expect. The Noctua NH-U12S isn’t far off in size and it ended up performing a little better as well. Leaving the Dark Rock Slim being best with the mid-range 3600X were the 3800X did down clock a little more than the others in blender for example.

Some of the performance issues could also be attributed to the mounting system that doesn’t have a spring mount to make sure the perfect socket pressure is used. The first time I installed the cooler I couldn’t boot our system up because it was too tight, which made me wonder for each of the reinstallations after if I was too tight, too loose, etc. Something I didn’t worry about with the other coolers that had the springs. The other downside for me was the fan clips, when compared with the Noctua clips that are similar the Slims clips don’t have enough stretch in them to make it easy to remove them. This isn’t a huge deal when you are just installing the cooler and moving on like most of you will, but when swapping CPUs like I did for our testing the small installation issues start to become bigger issues and this was one of them.

Overall though I really do like the cooler when you need the specific size. Obviously going with the larger Dark Rock models would still be a better option if they will fit. But the Dark Rock Slim offers that be quiet! styling and noise performance with better clearance for tall memory and cases that won’t fit the Dark Rock 3. As for pricing, the Dark Rock Slim comes in at $59.99 which is a premium price and the U12S from Noctua is selling for the exact same price, with their brown colors. Getting the blacked-out U12S runs another $10 making the Dark Rock Slim a good option if you are looking for a smaller tower cooler with style and is extremely quiet. 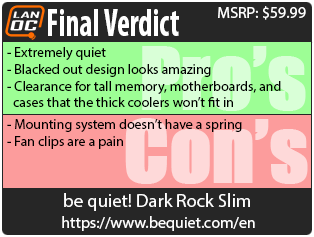 You might call him obsessed or just a hardcore geek. Wes's obsession with gaming hardware and gadgets isn't anything new, he could be found taking things apart even as a child. When not poking around in PC's he can be found playing League of Legends, Awesomenauts, or Civilization 5 or watching a wide variety of TV shows and Movies. A car guy at heart, the same things that draw him into tweaking cars apply when building good looking fast computers. If you are interested in writing for Wes here at LanOC you can reach out to him directly using our contact form.
Discuss this article
Log in to comment
Posts in discussion: Be Quiet! Dark Rock Slim