Before getting into the Dark Rock Slim itself we do have the packaging. Like the heatsink, be quiet! went with all black for the packaging and this sticks with all of their other packaging as well keeping them all looking similar on the shelf. You have a picture of the heatsink on the front with the model name in the biggest font under it. Their logo is in the top right corner but beyond that, you only have the high-end label on the left edge and the no compromise silence and performance quote under the name keeping things very simple and to the point. I love that the picture is on the front, not enough products do that. The side of the box does have a full specification listing and along with that they highlight the coolers 180-watt TDP. Then around on the back they touch on its two main features. The compact design for clearance, especially in the example they use which is an X299 board with quad-channel memory which ends up being tight against the CPU on both sides. 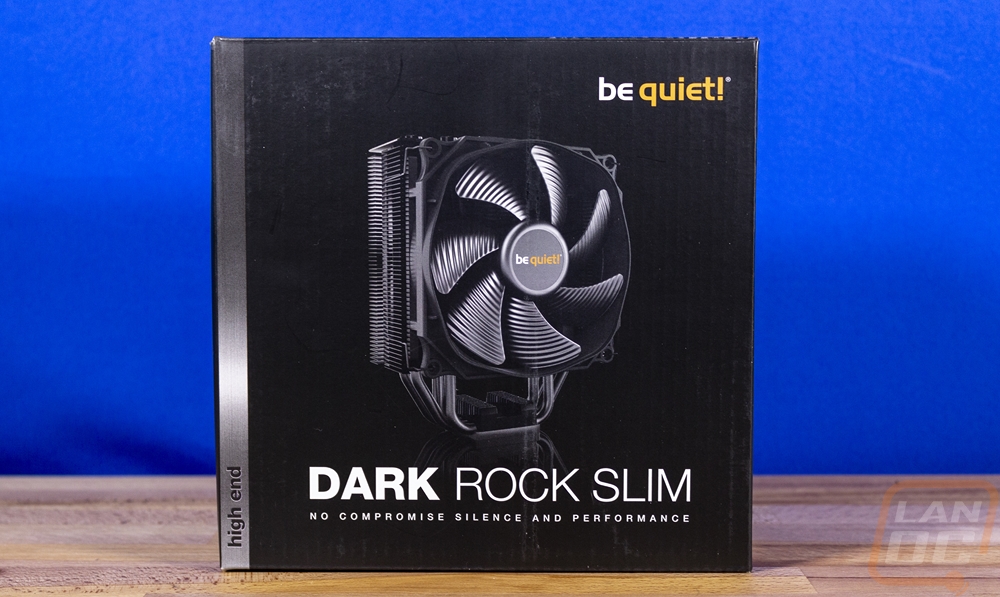 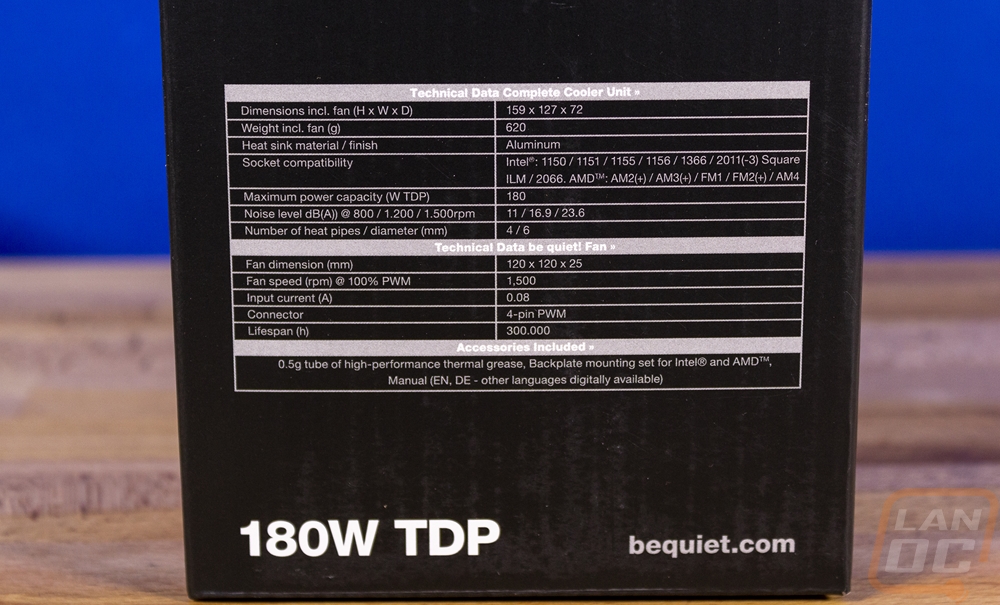 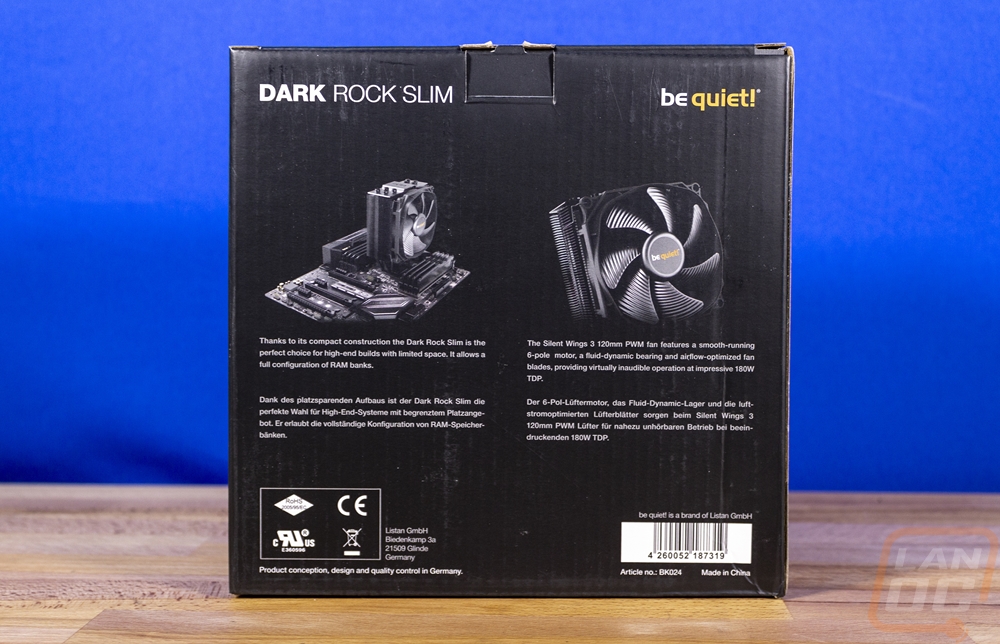 Inside of the box, the heatsink and fan come wrapped up in a thick white foam and then there is a small box with all of the mounting hardware. The installation instructions come right up on top of the box as well. 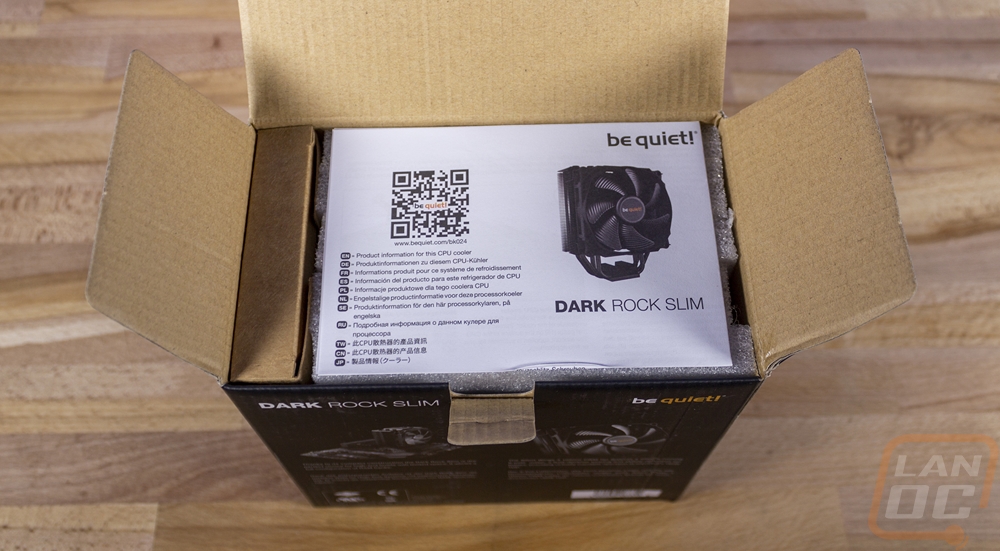 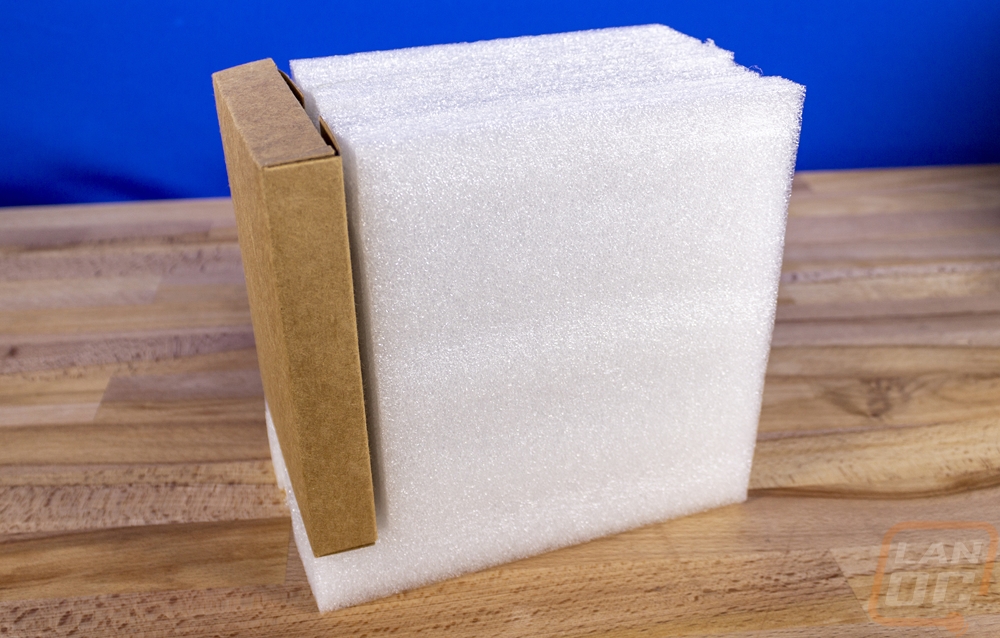 As for inside of the accessory box. You do get a small tube of thermal paste with enough for one to maybe two installations and mounting brackets for both Intel and AMD systems. There are also two sets of fan mount clips which means you can install a second fan later for a push-pull configuration if needed. 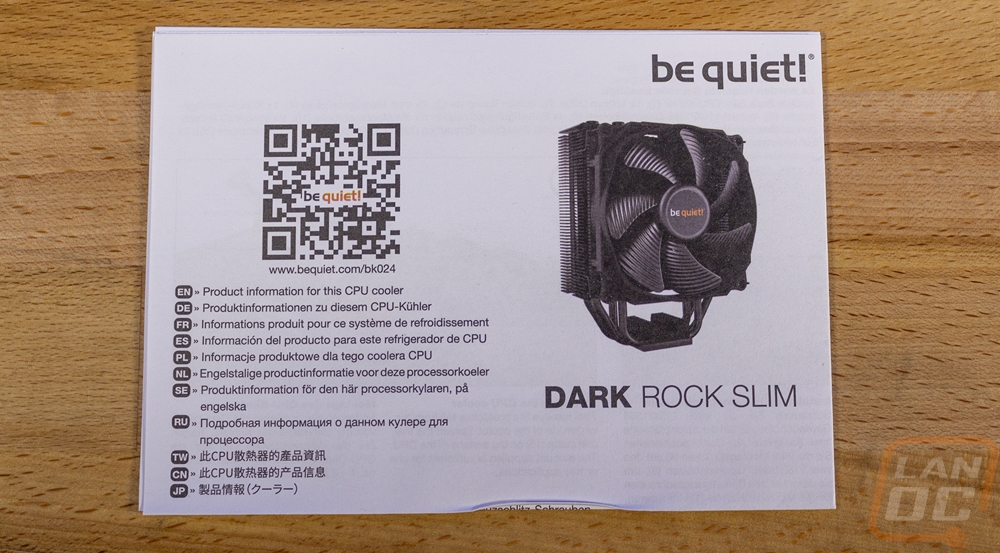 So the Dark Rock Slim doesn’t come with the fan preinstalled but I wanted to start off with complete pictures of the cooler because this is what you are going to see with it installed. The all-black heatsink design is awesome. Everyone, including Noctua, is finally moving to this but be quiet! has been doing the all-black cooler from the start. On top of that their fan design is basically all black, not black with a touch of brown or white here and there with just their logo in the middle being the only other colors. So a lot of coolers, especially with everything going black on black, tend to blend together. But the Dark Rock Slim still looks like a normal be quiet! cooler because of their fan design and because of the heatsink cover up on top with that standard be quiet! look. Now where this cooler is different is in the thickness of the heatsink. So the standard Dark Rock 4 which this is based on, comes in at 74.3 x 136 x 159.4 for just the heatsink where the slim comes in at 47.4 x 127 x 159.4. It is the same height, just a hair thinner on the width. But the thickness of just the heatsink from the Dark Rock 4 to the Dark Rock Slim goes from 74.3 mm to 47.4 mm, it is a high difference! 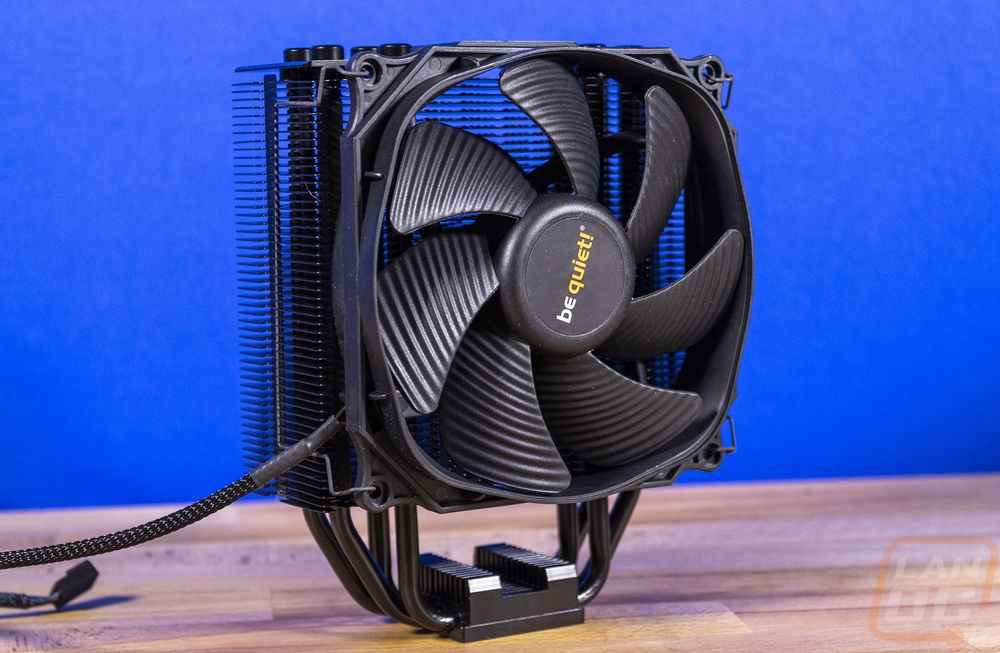 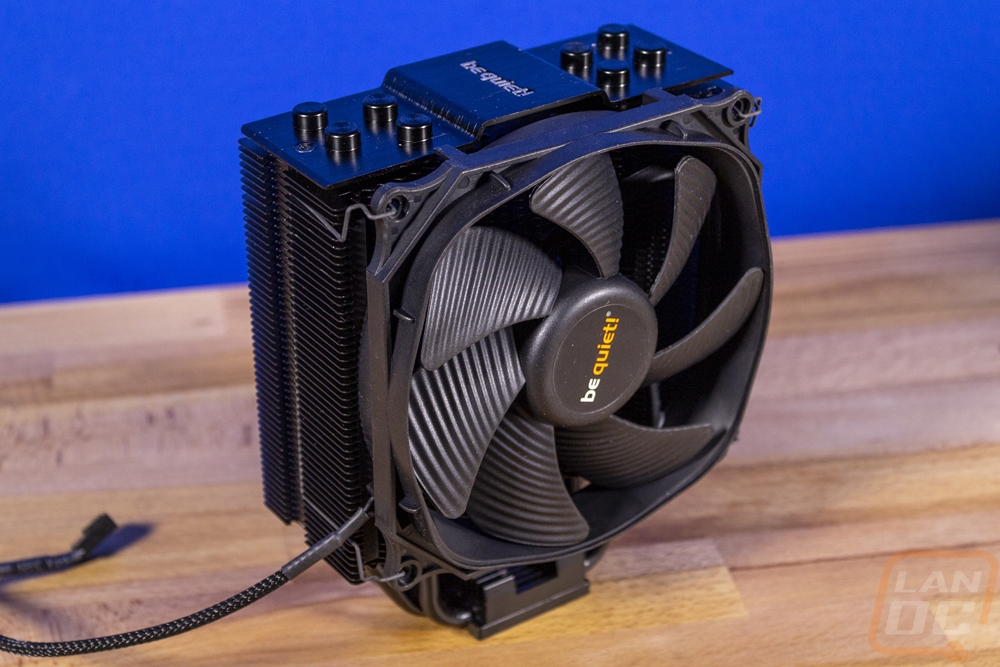 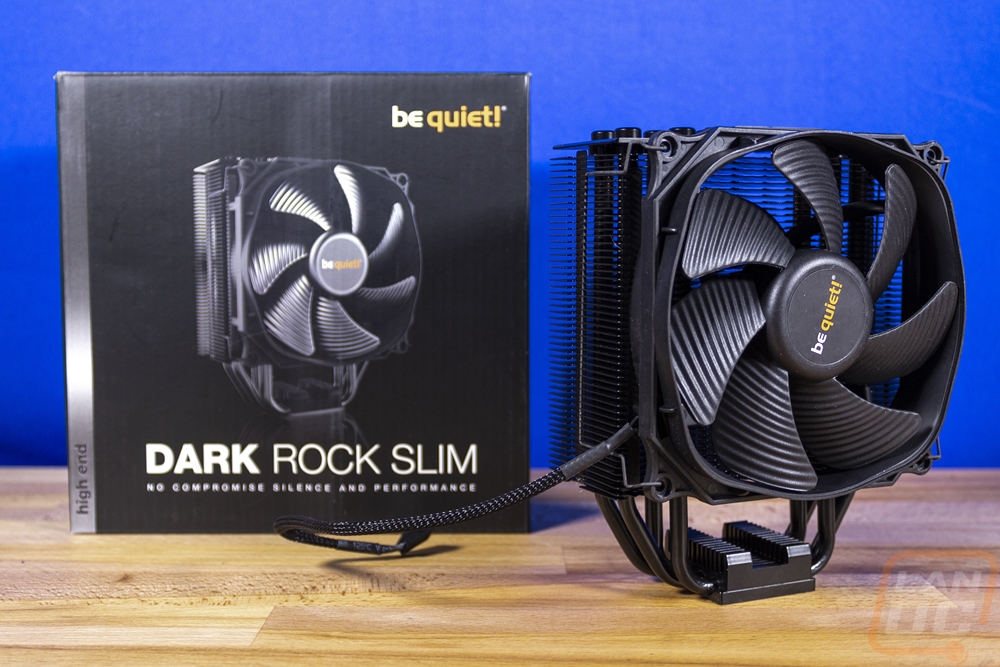 To me, I think one of the biggest things that set the be quiet! coolers apart is their fan designs. There are a few companies that make it clear that they are working on designs to tweak and tune performance and noise like be quiet! and Noctua then you have other companies that it's almost like they saw one of the other companies do something like add fins or rubber bumpers and they add them to check a box or to add as a feature on the packaging. The Dark Rock Slim comes with a be quiet! Silent Wings 3 130mm fan and you aren’t going to miss the “wave contoured cooling fins”. But if you look closer there are other details like now in the corners of the fan they have opened up around the fan to pull in more airflow. The fan design also doesn’t have any of the normal rubber pads or even mounts on both sides like a normal fan would have. The rubber pads are on the heatsink itself. 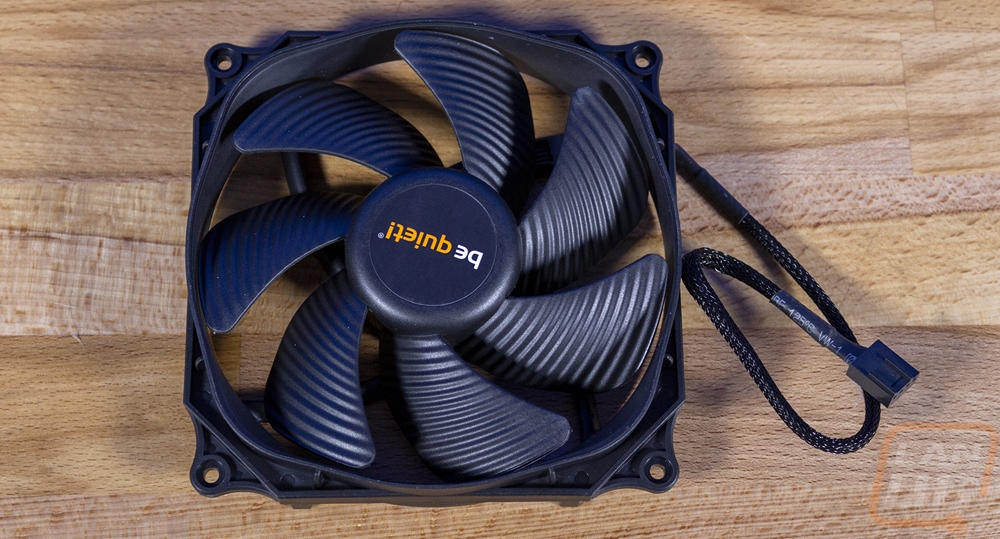 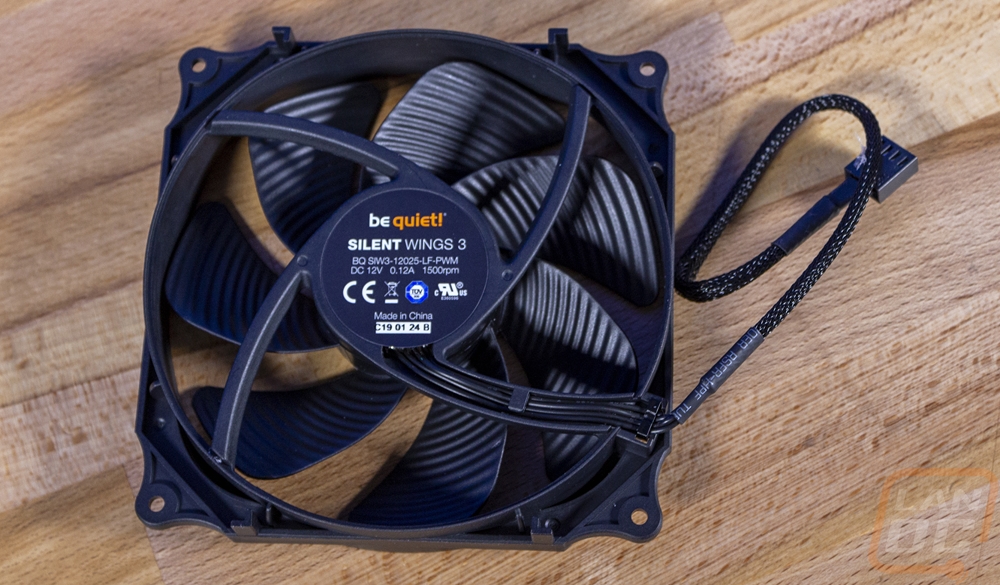 This is what I was talking about with the rubber fan mounts being on the heatsink itself. They went with a thick strip that goes from top to bottom to prevent any vibrations. 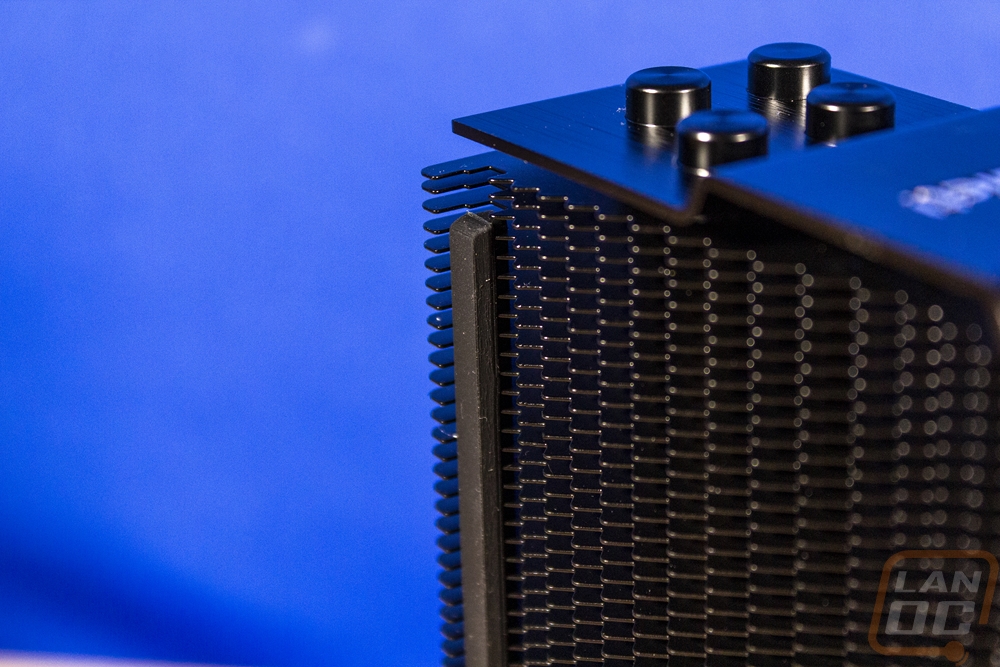 Now just because it is a lot thinner doesn’t mean the Dark Rock Slim doesn’t have a few of the same tricks as its bigger brother. On the back where the warmed air exits the heatsink fins have a staggered look three fins at a time. The fins themselves are thick but have a nice gap between each other which helps with noise and you can see how the heatpipes are staggered as well with four on each side in pairs together. The side view does show that at the middle of each fin the edge is closed off but on the front and back they are open on the sides to open up even more room for airflow from the fan to go. The fan side design also has its own uniqueness with pointy arrows all along the fins to cut into the air and cut down on turbulence and noise. That side also wraps around the fan slightly on the sides as well to hold the fan in place. Then up on top, you have a thicker aluminum cap with the raised portion in the middle. This has the be quiet! branding on it and then each of the heatpipes also has a small cap as well for the clean loop up on top. 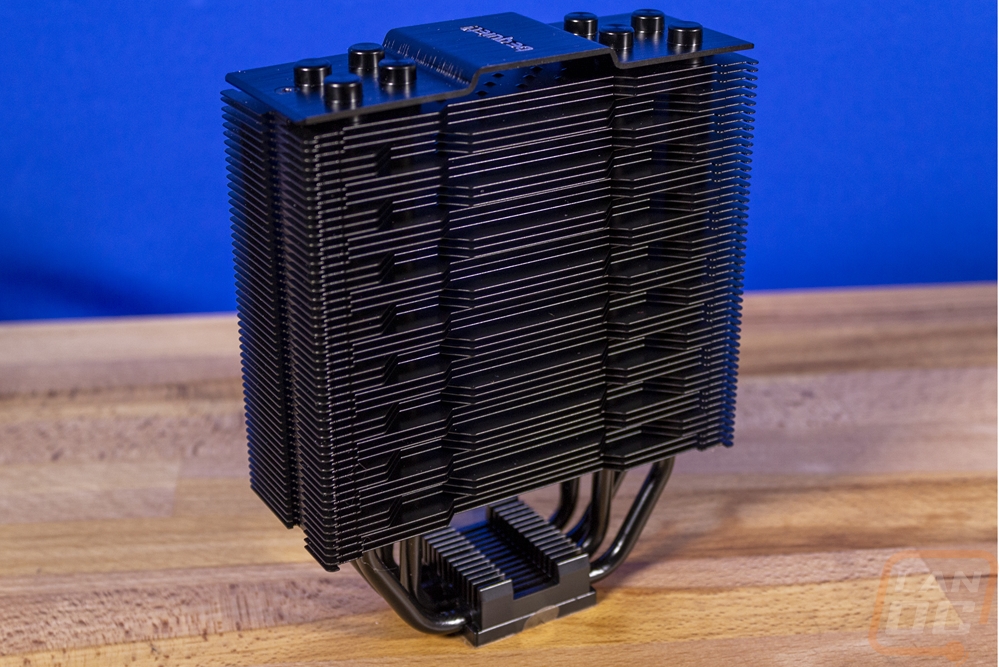 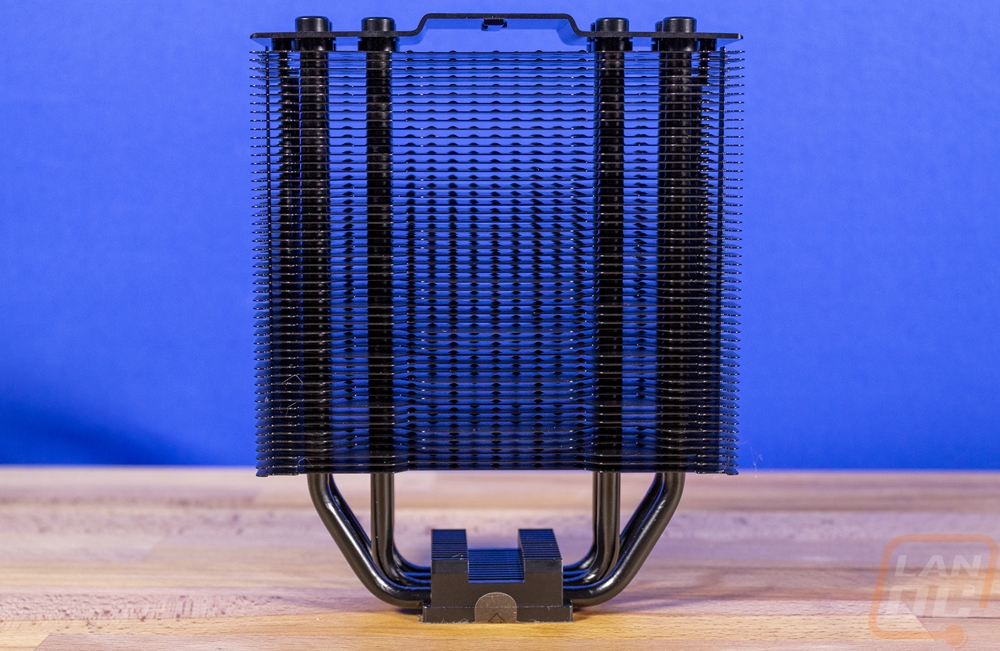 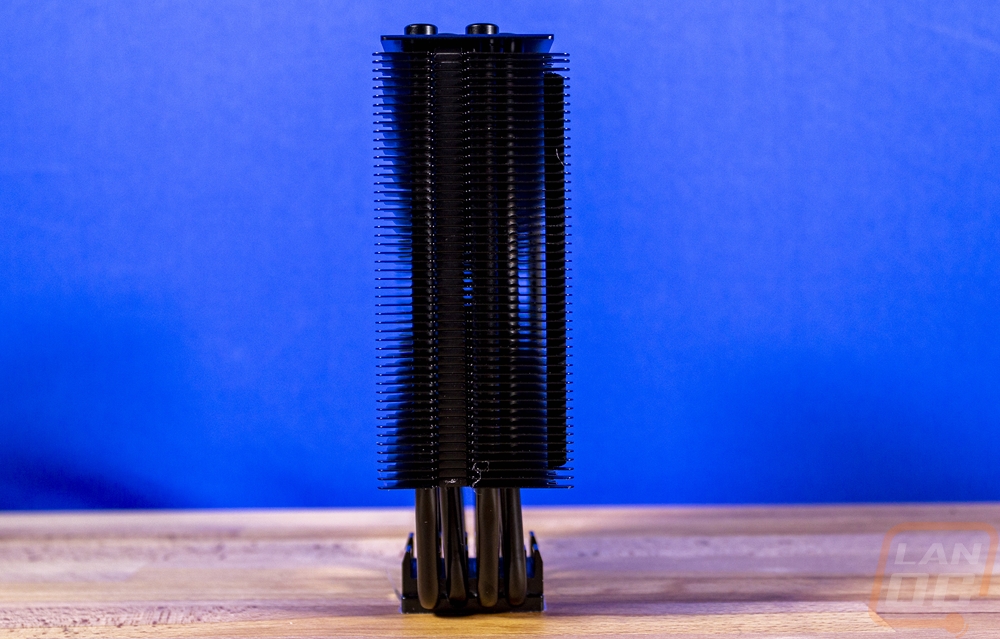 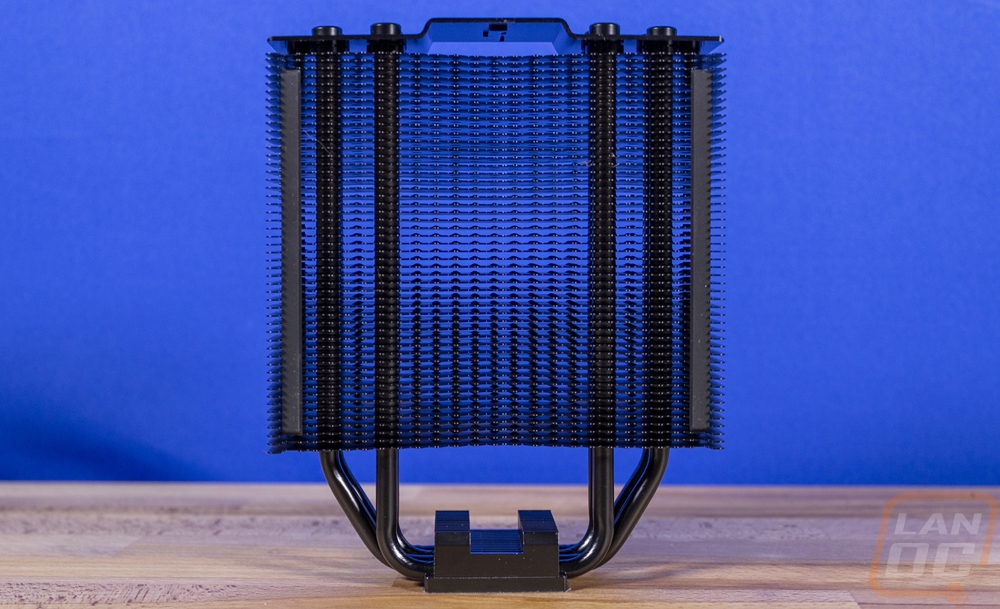 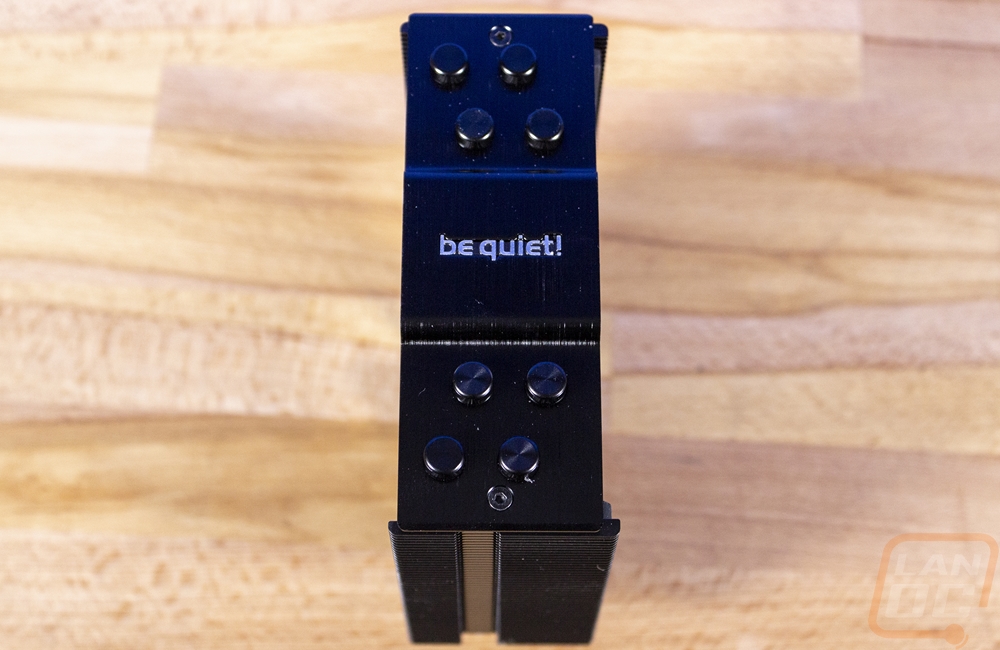 Seeing all of the heatpipes and even the top of the contact surface being blacked out are the small touches that really make this cooler look good. So overall it has four heatpipes that are in a U shape and run up the heatsink on both sides of the contact surface, doing double duty. As I mentioned earlier they are staggered with two on the outside and two on the inside to help spread the heat across the whole heatsink. They are not direct contact heatpipes, the Dark Rock Slim does have a machined surface that they sit on top of. That contact pad also has its own heat dispersion with small machined fins on top as well, above the heatpipes. As for the surface, you can see a circular machined surface so it isn’t a perfect mirror finish. This is more apparent with the reflection test where you can see the measuring tape, but it is blurry. So thermal paste will be important with this cooler to compensate for those small surface irregularities. 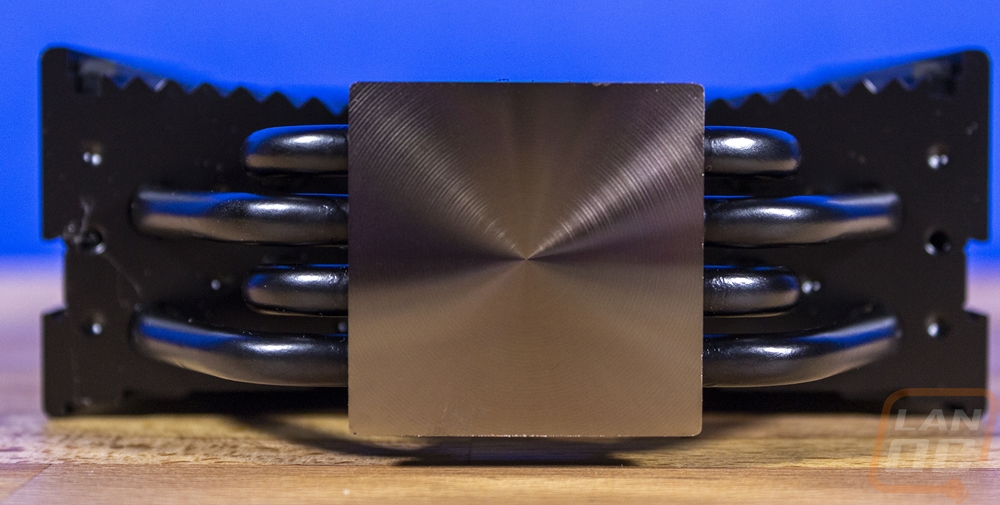 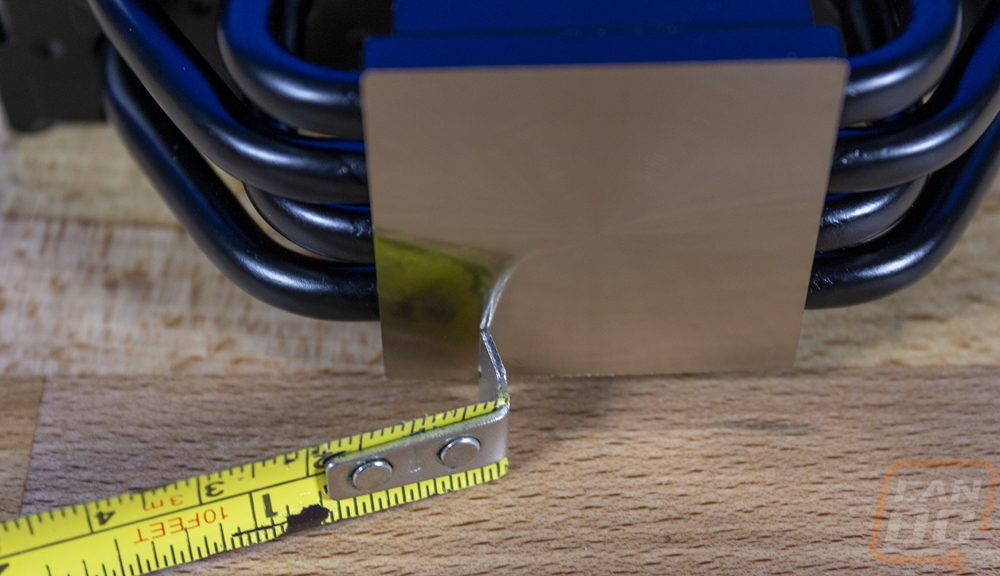 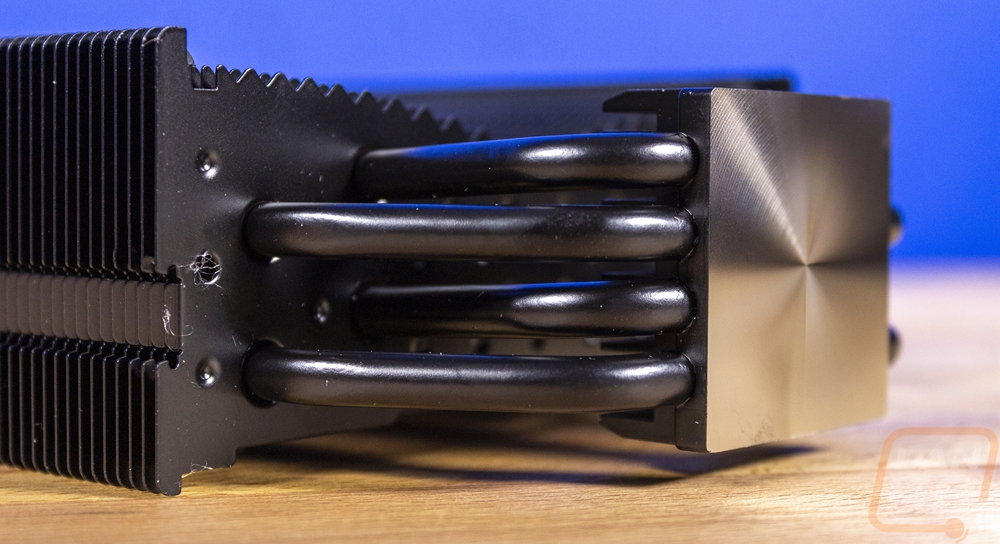 We have 1096 guests and one member online