For cooling testing, I have documented my entire process as well as the test platform in the previous section. But to keep things simple I ran three batches of tests across all four heatsinks. All of this was done in my actual PC. I normally stick to testing on our benches or test platforms but it just so happened my only Threadripper setup was put in to use after my work PC gave me issues. I have been using the Wraith Ripper that entire time but I was excited to see how all four coolers compared. The platform is all in a CaseLabs Bullet BH8 case with an ROG Zenith Extreme board and a 1920X CPU.

My first test is by far the most demanding. I use AIDA64 and its Stress Test with the FPU focused CPU load type. I learned with my Ryzen test platform that this is a quick way to put the coolers under more load than I could with any real-world test. So this is without a doubt a worst-case scenario. You might be wondering why I have both the temperatures and the clock speeds, this is because I found that at 67/68c our 1920X running at completely stock settings will throttle. The temperature readings are using the TDie result which doesn’t have any adjustment in that reading. AMD has designed the platform to throttle the clock speeds down to keep temperatures from going above that point. The same happened in our Ryzen testing as well. So I have all three Noctua coolers than the Wraith Ripper from Cooler Master at the bottom. I also tested everything twice, once with the fans turned to 100% and the second time with what I would call stock fan speeds. The fan profile is set by the motherboard, I just run the Asus AISuite III fan calibration and let it work things out.

So what was the end result? Well The NH-U9 and NH-U12S both called at 68c and throttled back with the stock fan profile and the Wraith Ripper capped at 67c but did the same thing. The difference though was with the clocks themselves. The NH-U9 clocked back to 3574 MHz, the U12S 3474 MHz, and the Wraith Ripper clocked back to 3674 MHz. The Wraith Ripper was really close to the 3699 MHz that I saw across the board when not being downclocked but the top two on the list really were hit hard. The U14S was the only cooler tested that didn’t down clock, but at 66c it was very close. Cranking the CPU fan up to 100% (the case fans were already running at 100% for all of the testing just to prevent hot pockets or the case from skewing results.) all four coolers improved. The NH-U9 and U12S both still were throttled back but much much better than before and you can see the U12S redeemed itself where at the lower fan speeds the dual fan configuration seemed to help the U9. The U14S and Wraith Ripper both came in at 65c and the 3699 MHz clock speed. 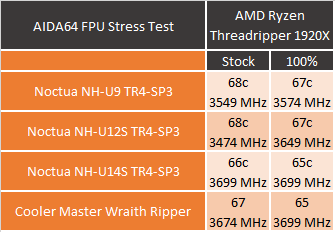 My next test was still in AIDA64, but this time around I used the CPU workload which is more realistic in its load. You can tell right away just how big of a difference it makes. All four coolers in both 100% and stock tests came in below that 67/68c throttle point this time around. The worst result was the NH-U9 with its 92mm fans and smaller cooler size at 61c with the stock profile and behind that the U12S at 59C. I was surprised however to see the Wraith Ripper next, it is the largest of all of the coolers tested. Then the U14S being first at 51c. 100% fan speed helped of course but the temperatures dropped but the order of the coolers was still the same in that test as well. 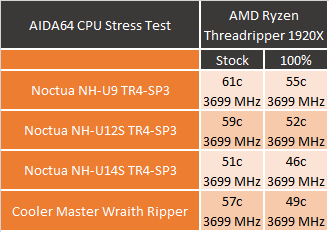 My last cooler performance test was a new one. I hate just doing a synthetic load and calling it good so I added in Blender. A real-world application that is ultra-demanding. Here I ran the full benchmark on the CPU while waiting for peak temperatures. This did also push the NH-U9 and the NH-U12S both up into the throttled range again. With the stock profile the U12S was the worst and the NH-U9 with its dual fans did slightly better at 3649 MHz. This isn’t far off from the 3699 MHz normal, worlds better than in the FPU test. The NH-U14S and the Wraith Ripper, on the other hand, came in at 62c and 63c with the U14S being slightly cooler. Turning the fan speed up to 100% showed there was still room in all four coolers with them dropping down below the throttle point even though the NH-U9 still throttled back slightly at 66C. The U12S did much better here at 63c but the U14S was still the best of the bunch at 56c. 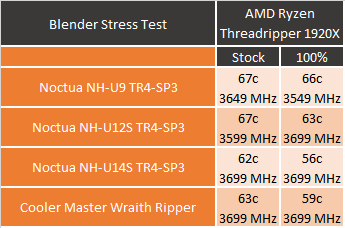 One thing I did learn in my testing is that learning what your throttle point is important when configuring your fan profile. You will notice that in all of the coolers that throttled, cranking the fan up to 100% fixed the issue. The stock profile being created by Asus wasn’t taking into account that 67c is really our max temperature, they still leave room in the fan profile to go up to sometimes 80c before reaching max fan speed. If each was set to 67c as the max and then went down from there, it would prevent throttling altogether. Moving forward past my testing today, I plan on making my own custom profile for my personal use and if you are running Threadripper with air cooling you should as well.