So the NH-U14S TR4-SR3 is the largest of the three Noctua heatsinks and the box size does reflect that. But beyond that, the packaging looks a lot like the NH-U12S TR4-SP3 because of the same white background with brown styling. The picture in the background gives hints of the heatsink but no direct photos. Then on the side the model name runs up in the white and is repeated again up on top only smaller than the first one. Below that they list what kind of heatsink this is. This is a 140mm U-Type cooler, like the two before it only larger. The model name reflects that as well with the 120mm U12S and the 140mm U14S. Noctua lists off the key features on the top and front of the box but they dive into more detail on the right side. This is where they have a description of each feature and a small image that helps with the description for each. Then just like on the other coolers, they have all of the specifications on the left side including the heatsink, fan, and a list of what comes inside. The only picture of the heatsink is the line drawing here which does break down the dimensions really well, but I would love to see a full picture of the cooler somewhere, not just the zoomed-in images on the top and front. 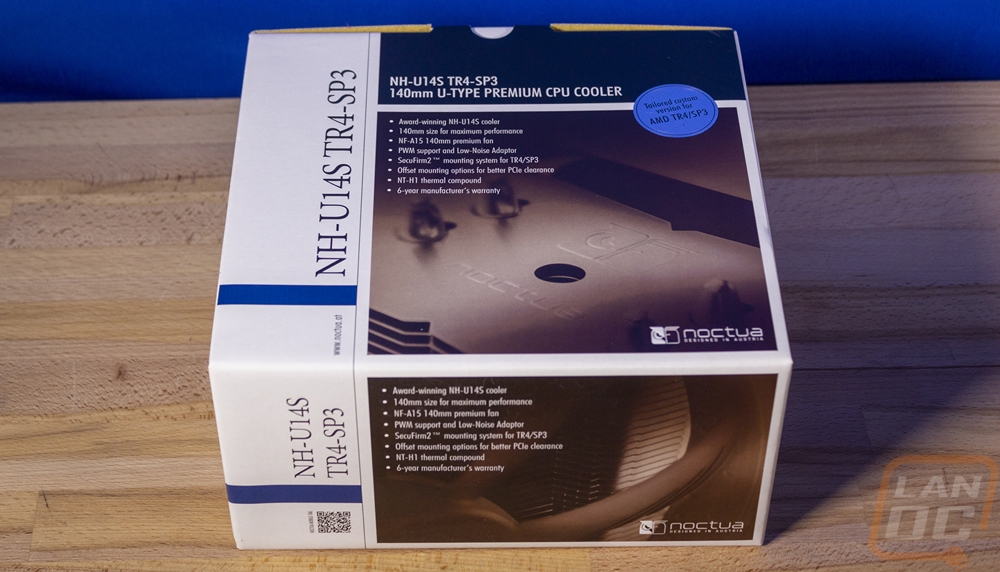 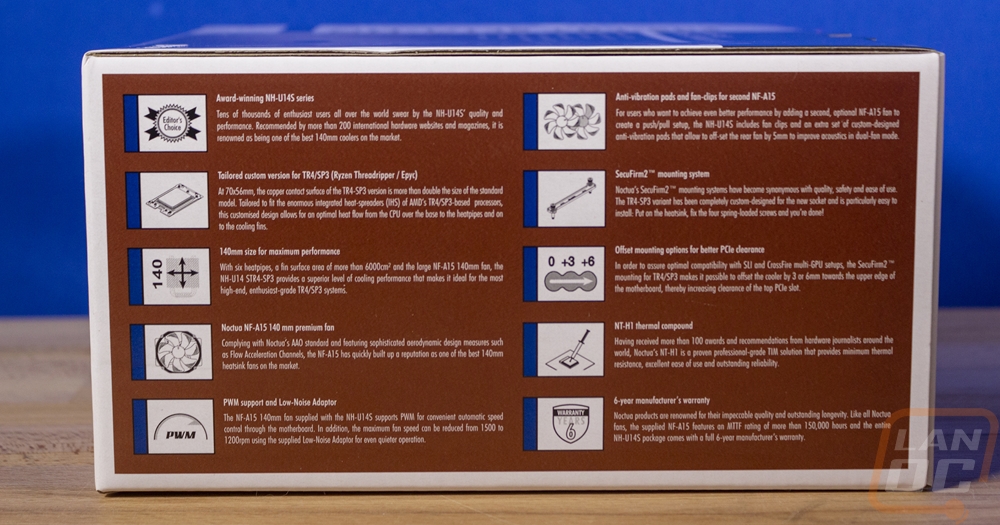 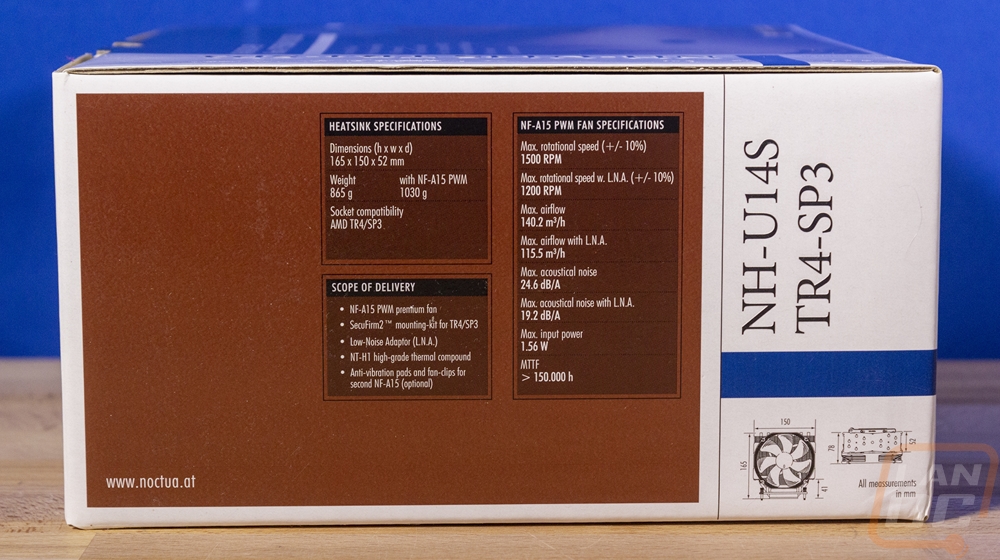 Like the other coolers, the U14S comes in a cardboard housing inside of the box to keep it safe and to be sustainable. Then there is a small accessory box. Inside you have a folded up instruction manual. There are more vibration pads and the tall Allen wrench. Then like the others, you get a full-sized tube of thermal paste and the thick metal painted case badge. You also get an extra set of fan clips so you can add a second fan for a push-pull configuration if you want as well as a Low Noise Adapter. 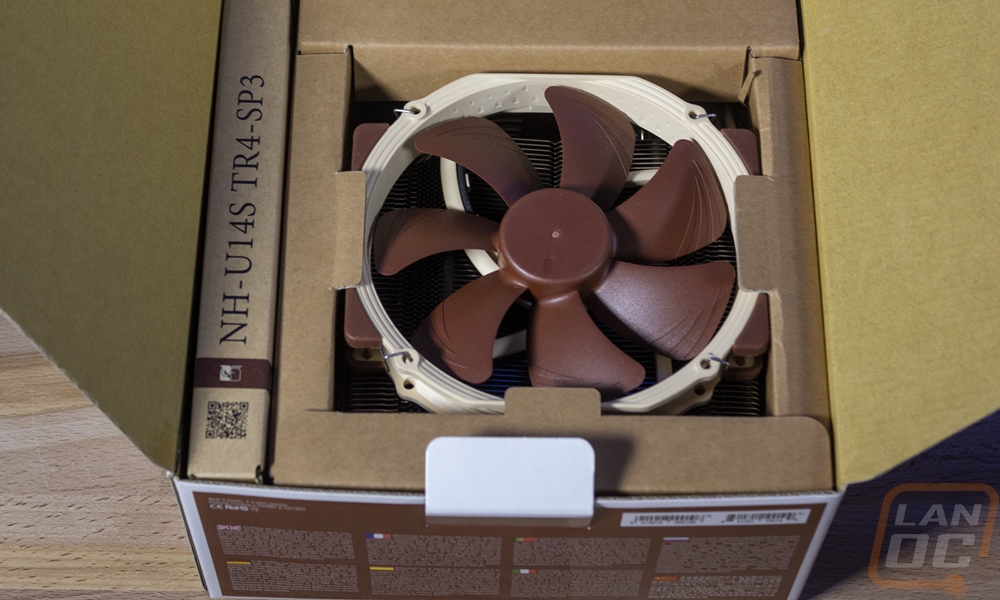 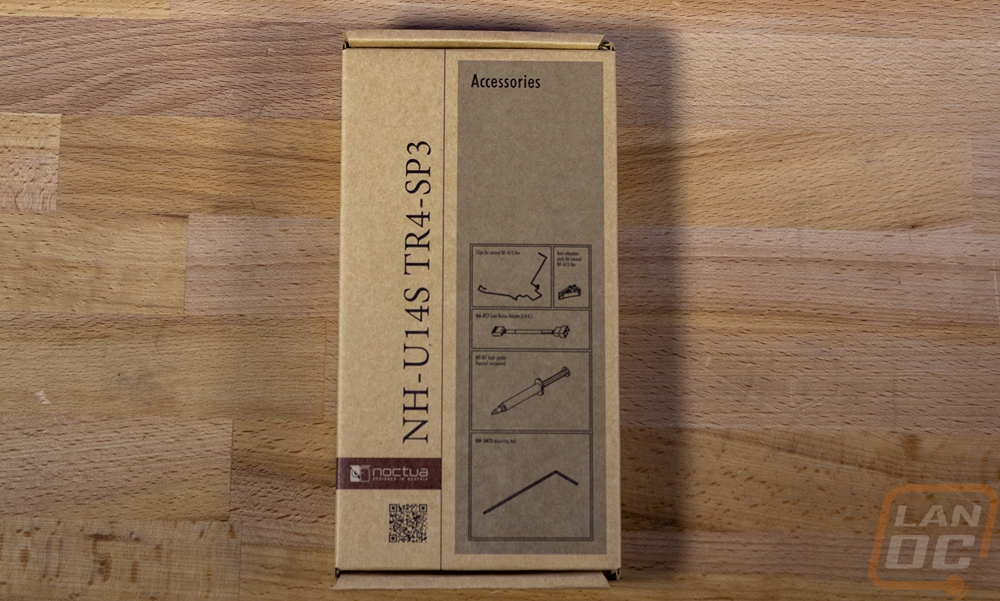 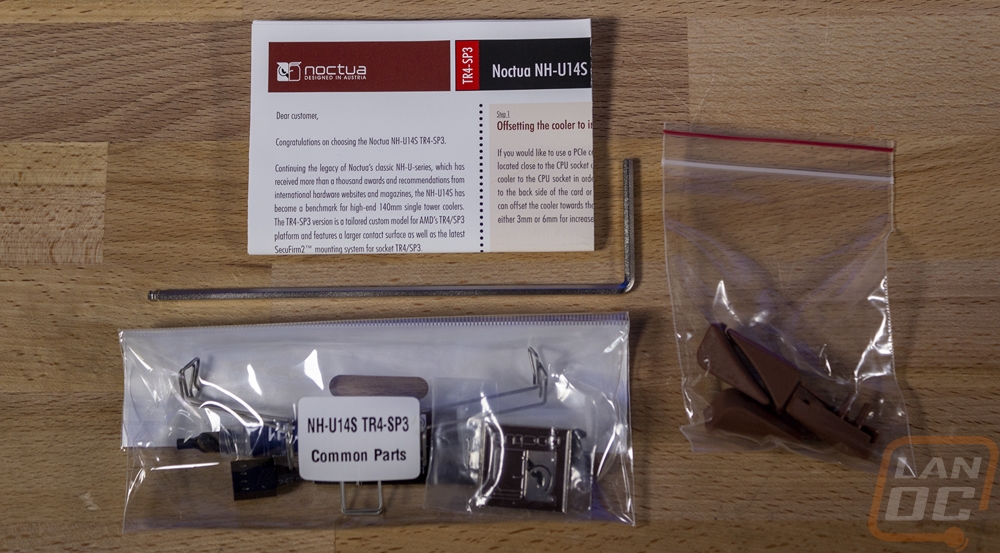 So the NH-U14S TR4-SP3 is extremely similar to the NH-U12S TR4-SP3 with its tower configuration and as Noctua puts it, U-Type design. They call it that because of the U shape to the heatpipes that make up most of the cooler. They run down from the top across the top of the base and then back up the other side, giving you twice as much heatipipe without packing a ton of small heatpipes in. The NH-U14S TR4-SP3 looks a lot different than the U12S however because of the change in the fan. It does still have the tan and brown look but by using an NF-A15 PWM fan this is a big cooler. The heatsink itself is wider than the NH-U12S by 25mm, taller by only 7mm, and it is also 7mm thicker as well. But adding the fan on adds even more to the overall height making it 165mm tall in total. That is a touch taller than the Wraith Ripper, but being a single tower design it is still a lot smaller overall. It still has that classic Noctua look and like the U12S, because the Threadripper model doesn’t change anything on the top ¾ it still supports the Chromax covers for the heatsink to switch this from exposed aluminum to black or white along with them offering a black Chromax fan as well and trim color options. 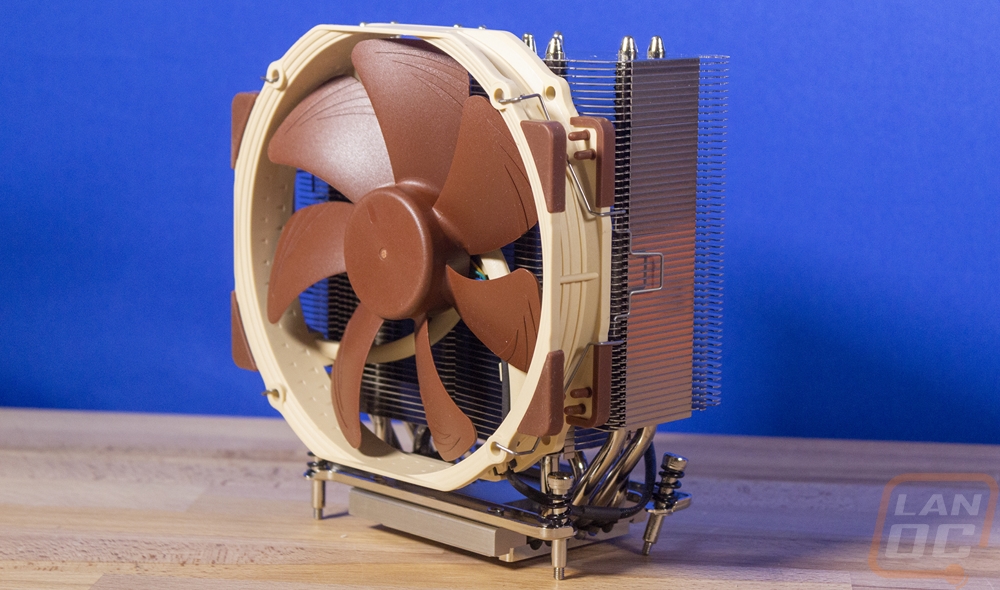 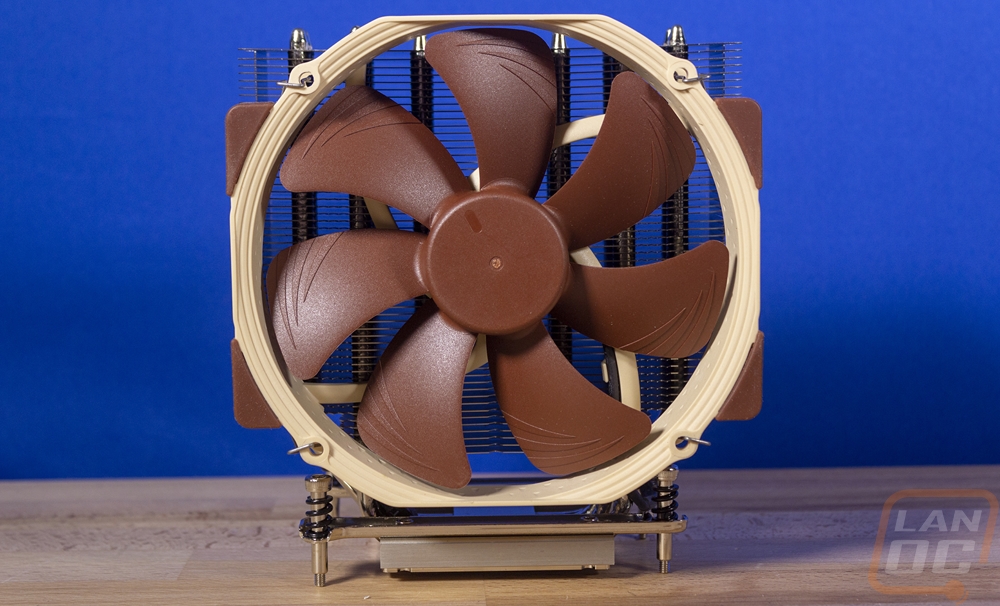 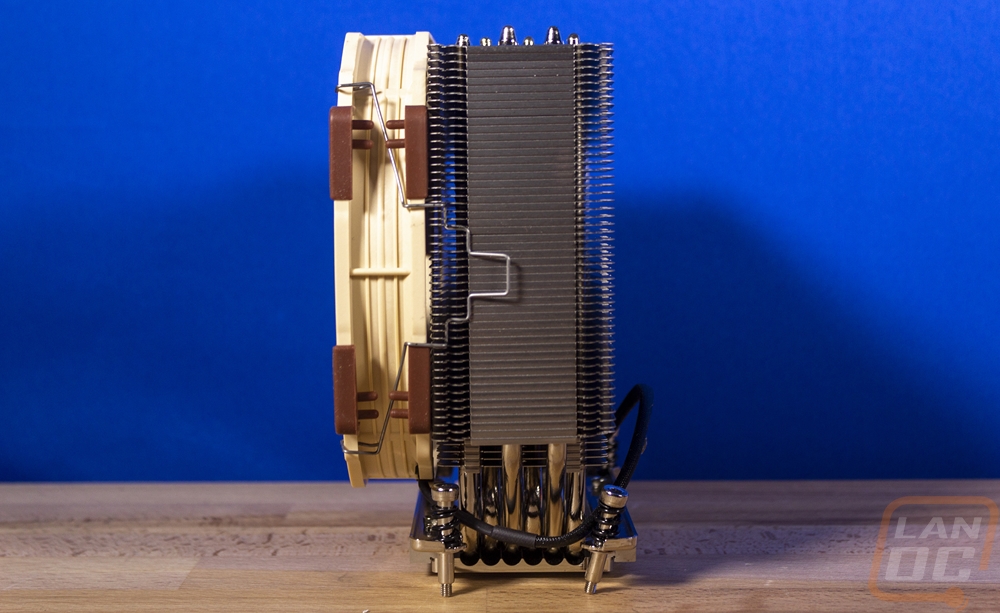 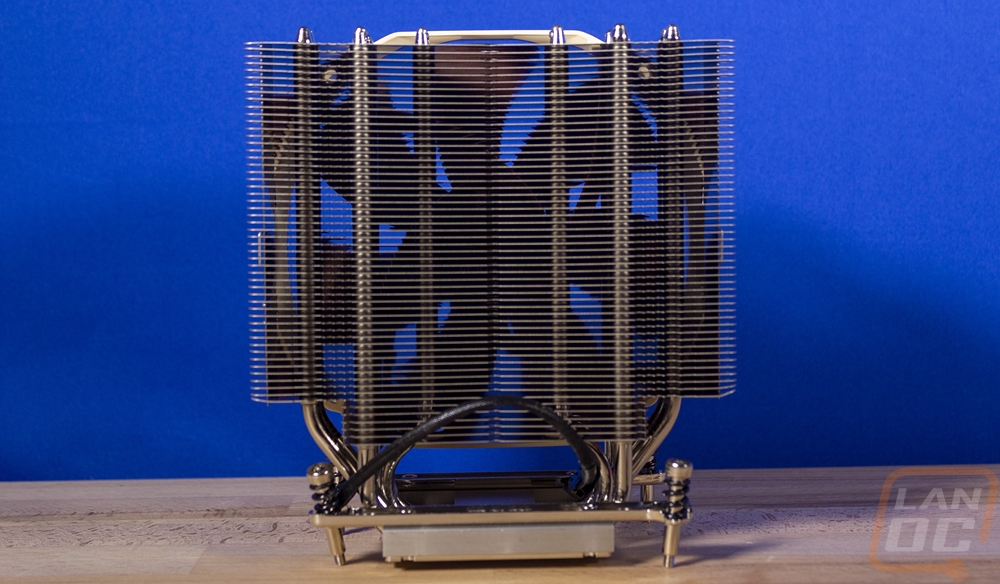 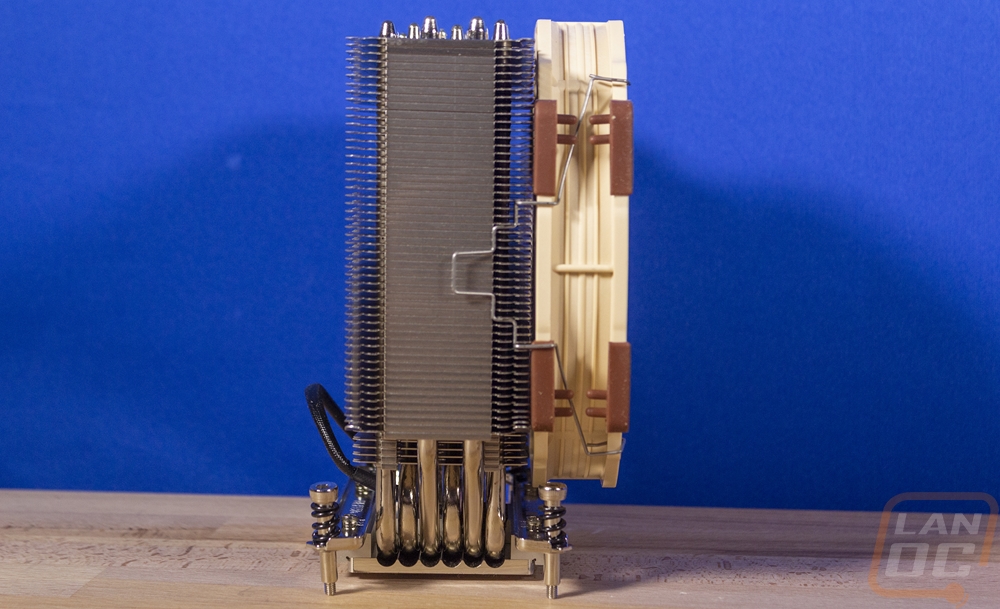 The view of the top on the NH-U14S TR4-SP3 helps a lot in seeing the heatpipe configuration. It has a total of 6 heatpipes, just like the non-TR4 model. Like the other Noctua heatsinks tested today. Those heatpipes are all a U shape with the contact area near the middle so in total the top has 12 pipes sticking out. This allows for the 6 pipes to pull double duty without having to be too small to fit over the base of the heatsink. They are spaces out though with a circular layout on both sides. The top of the NH-U14S TR4-SP3 also has the Noctua logo stamped up on top like all of their heatsinks. You can also see a few design choices with the shape of the heatsink fins here. On the outside, the double hooks on each corner are what make those fan clips so easy to use. Then the heatsink itself has the same V-shaped cuts in it on both sides just like the U12S did but this one also has more of a wide V shape to the heatsink itself, giving a gap near the center between it and the fan. The tower design isn’t offset like the NH-U9 was so when running just the one fan it does overhang that direction. But Noctua does include the clips to give the option to add a second fan for push-pull if needed. 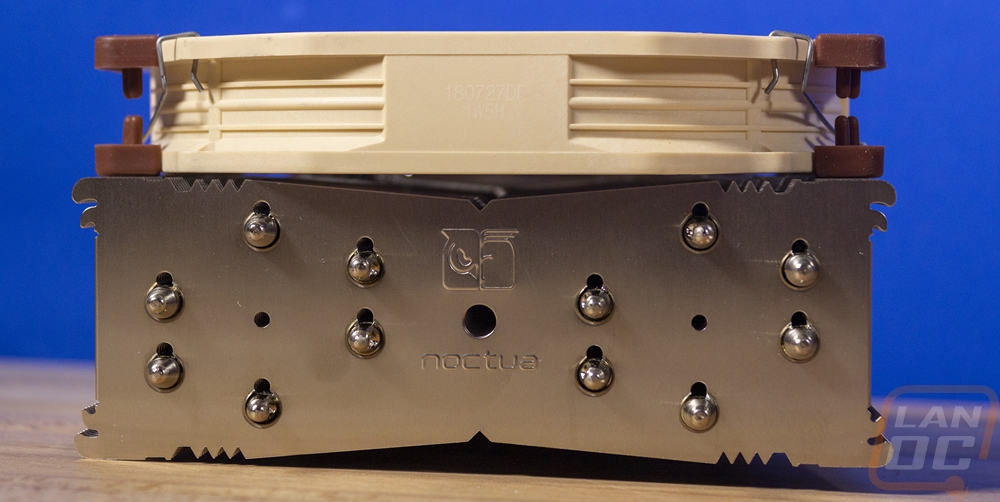 The side view of the heatpipes shows the 6 heatpipes layout and how they couldn’t add much more, even with the large contact area for TR4. The heatpipes are split up with three going to the outside and three to the inside to get that circle layout. 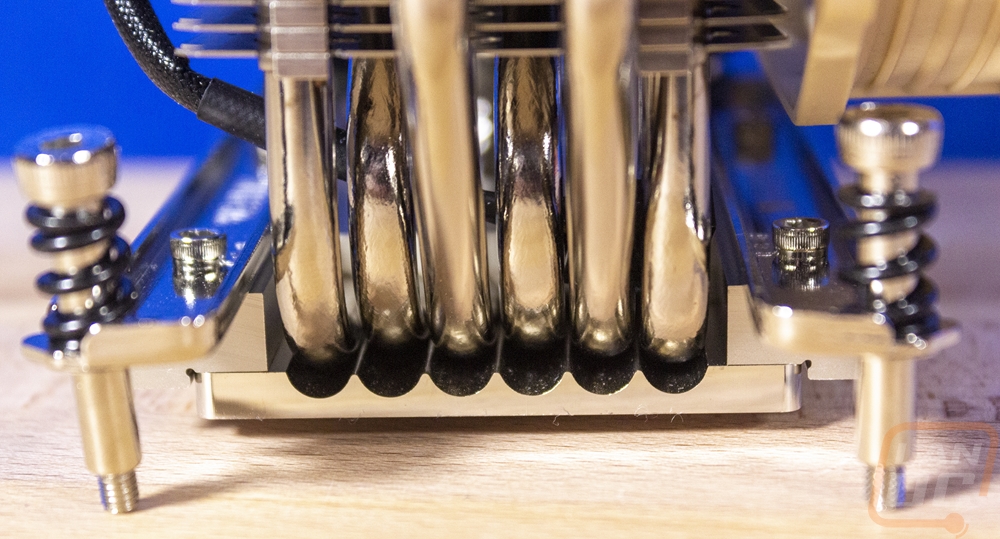 Then you have the contact area for the NH-U14S TR4-SP3 which, like the three other TR4 Noctua coolers, has been redesigned to be larger for the huge Threadripper size. The heatpipes aren’t a direct contact configuration, Noctua uses a machined surface with a few mm between it and the heatpipes. That surface does have some machine marks left, it isn’t a mirror finish like some heatsinks and waterblocks. But as you can see, it isn’t too far off once you have something in the reflection. 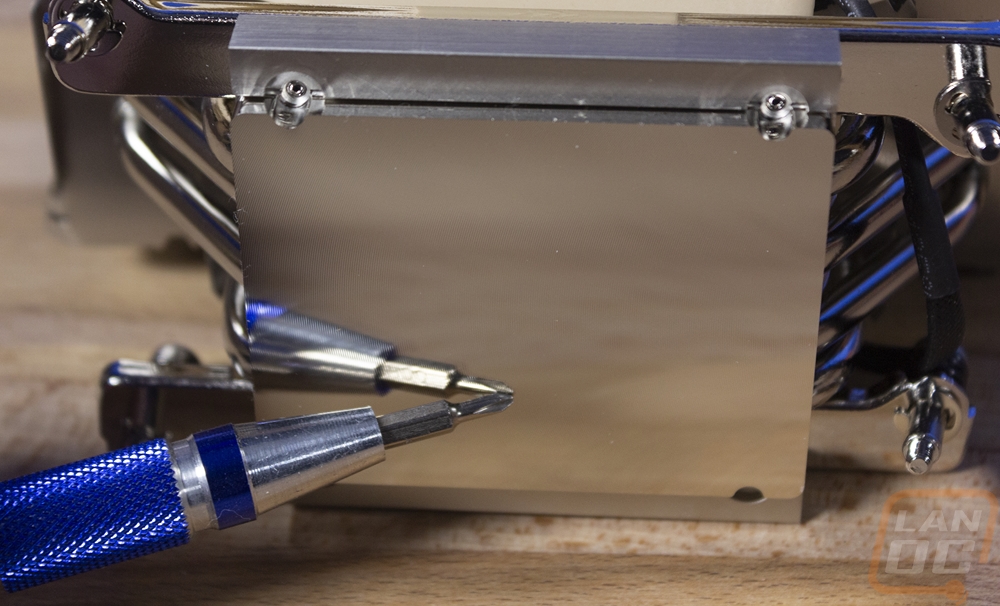 The TR4-SP3 bracket design is so simple, it is a straight bar from one end to the other with the mounting screws offset depending on which end it is on to get the mounting layout AMD went with. Each has a short screw with an Allen socket head which is unique for Noctua who normally uses Phillips head mounting. Unlike the Wraith Ripper which had long screws that ran to the top, these shorter screws also have a little more lean and adjustability to them. The bracket itself is screwed on, even though this is an exclusive design that doesn’t fit any of the other sockets you can see Noctua left the option in case AMD changes the mounting later on or if Intel’s LGA 3647 comes to the consumer market like AMD SP3. 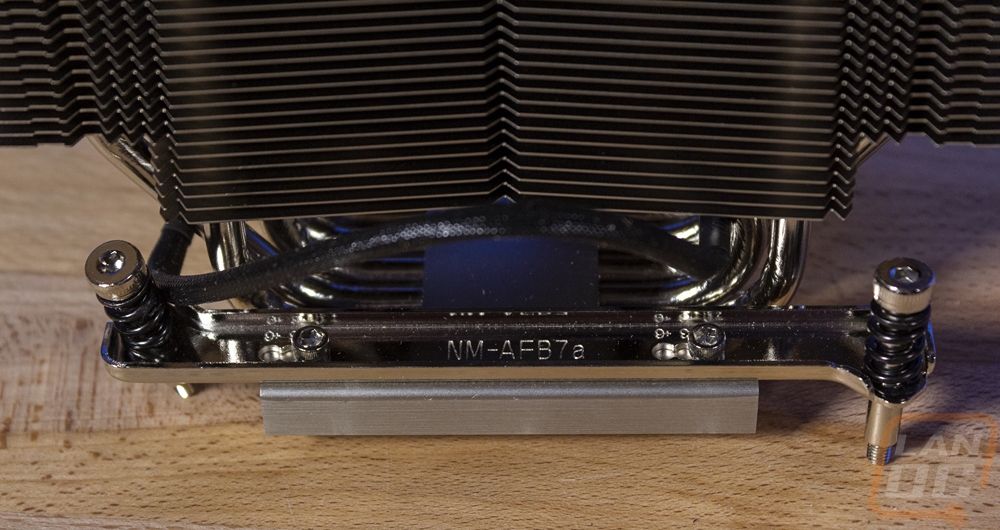 The NH-U14S TR4-SP3, like the NH-U12S TR4-SP3, comes with just one fan along with the clips to be able to mount a second fan if needed for a push-pull configuration. It comes with the NF-A15 PWM fan which is a unique design in that is has the mounting holes for a 120mm fan but it has more of a round shape to accommodate a larger fan blade. It is actually 150mm in total size as the fan's name would imply but the U14S name implies it would be a 140mm fan. The extra size runs up over top and below the heatsink for a little additional cooling. This fan runs at 1500 RPM or 1200 RPM with the Low Noise Adapter hooked up. Beyond that it has a similar feature set with the same SSO2 bearing and the brown blade and tan housing. It also has the anti-vibration pads, though they are a little different because they aren’t located with the mounting holes like the other fans. The cable is sleeved and has that Noctua wax-like finish like the other fans. The mounting clip is similar to the U12S which isn’t a big shock given the NA-A15 PWM’s 120mm mounting holes. 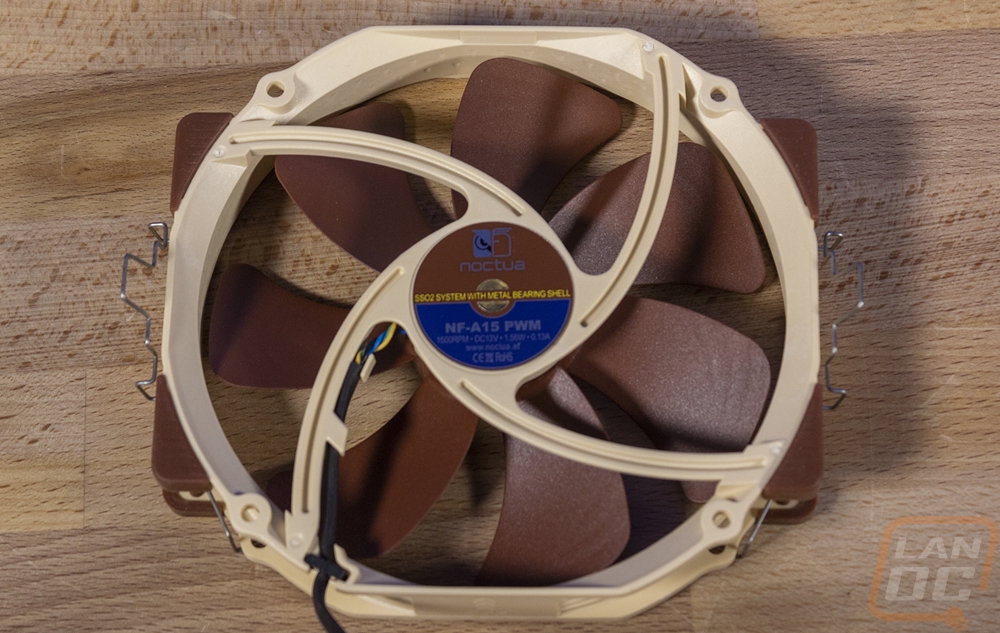 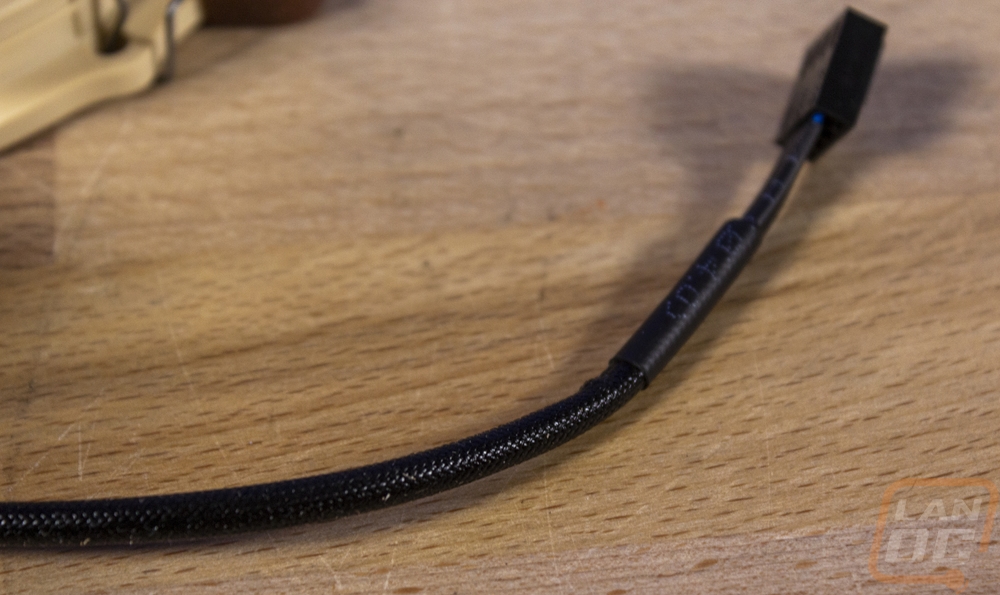 Here is a picture of the three Noctua coolers together to help give a little comparison for the size difference between the three. The NH-U9 is obviously the smallest but it is also significantly thicker to help with that, especially after it adds two fans into the mix. The U12S and U14S are a lot closer in size. But the U14S is both wider and larger but the height difference isn’t as big as you might expect. It is 7mm taller before you add in the fan. It is the huge 150mm fan that mostly extends the height. 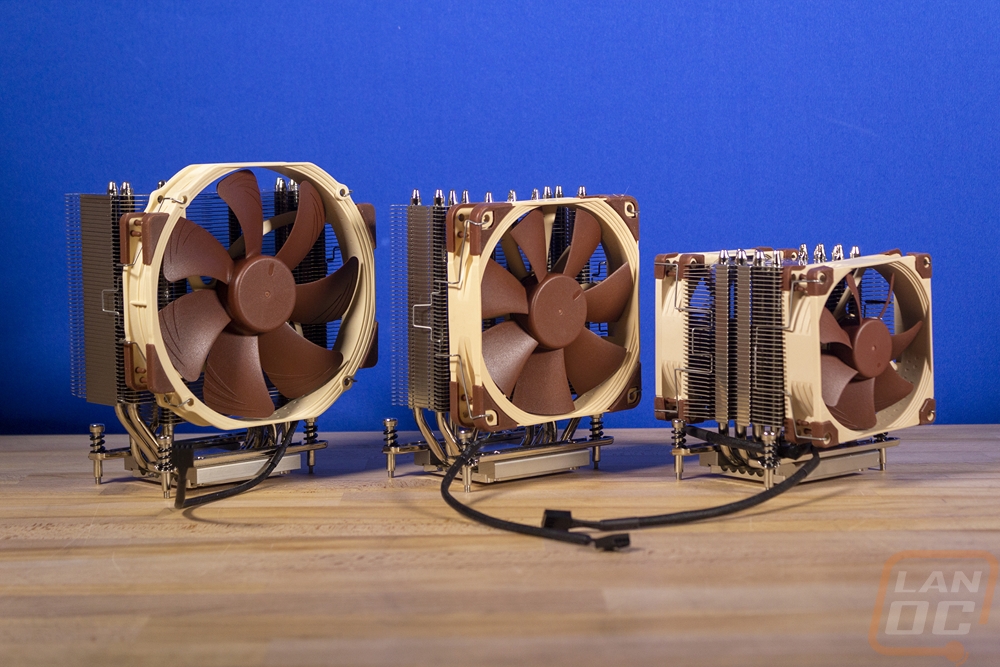 We have 868 guests and one member online