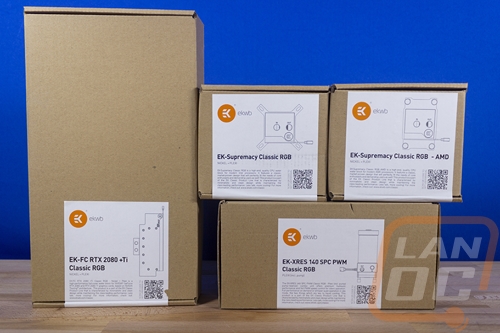 So let's run down through what EK is actually introducing. The new lineup is called Classic RGB and it is a small lineup. EK is only bringing out what you see here as well as a backplate that goes with the RTX 2080+Ti waterblock as well as a 120mm fan mount for the included pump. The rest of their lineups have so many variations available that it can be a little daunting for some people when trying to decide so I like that you basically just need to pick from the AMD or Intel model for the CPU waterblock and they just have the one RTX based Full Coverage waterblock right now. The matching pump/res combo is only available with their SPC pump and in the 140mm reservoir combo though I imagine it would be easy for them to make a taller or shorter model. 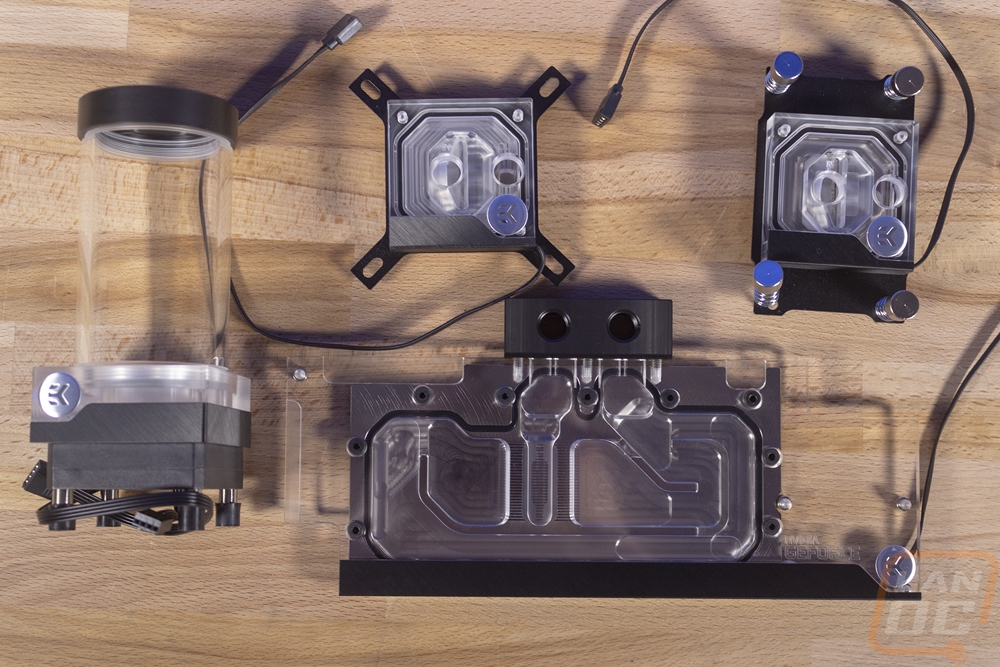 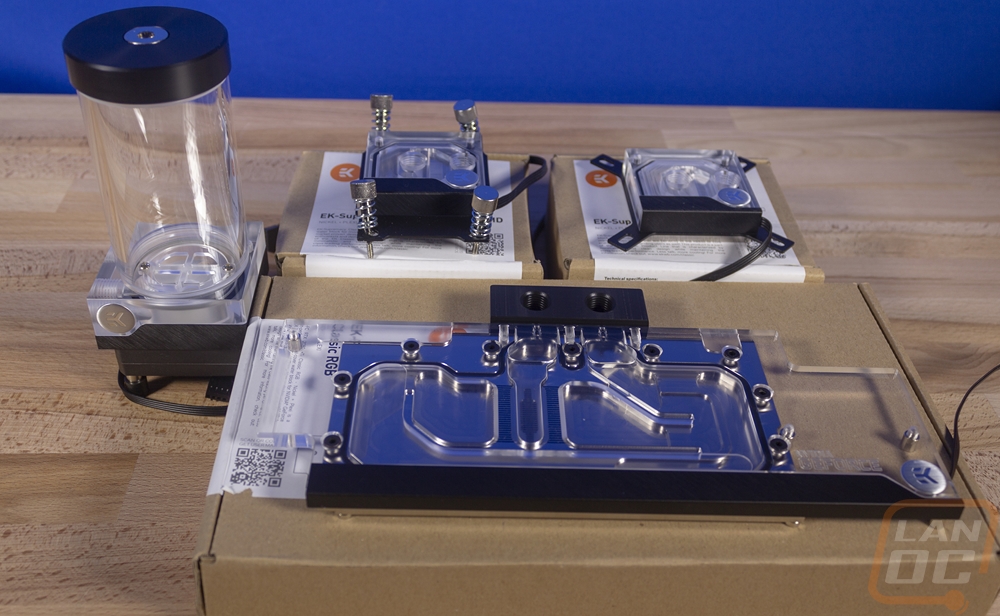 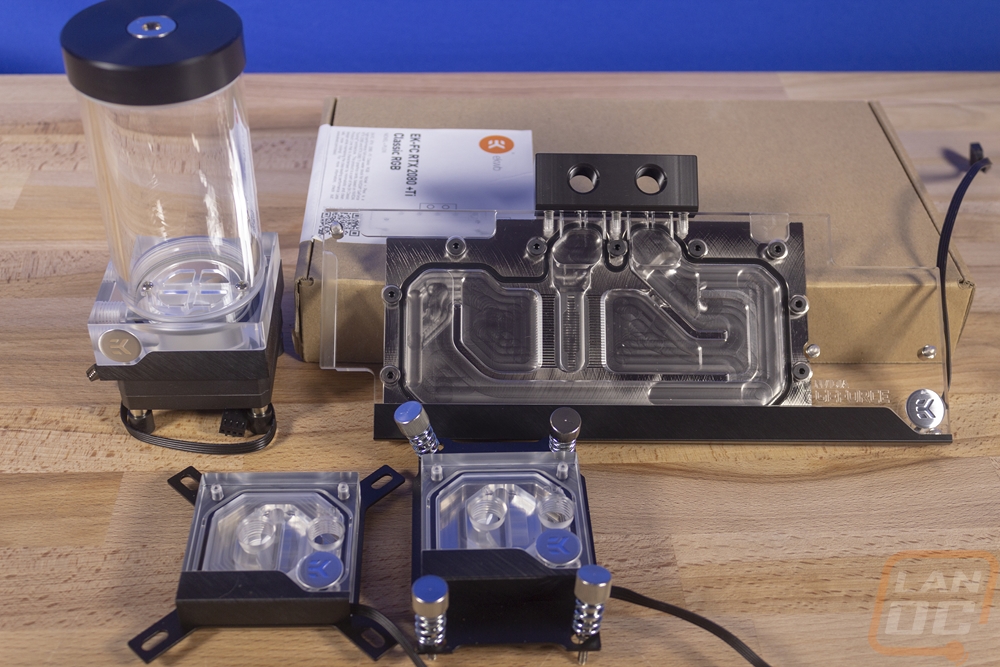 So what is the point of the new lineup? Well, obviously every company is scrambling to slip in RGB lighting into their products for the past few years now. EK brought out their Velocity lineup just recently even which is an all-new block design and most of them have RGB as an option. But beyond that, if you want a traditional or a “Classic” looking EK water block with lighting you really could only do it with Threadripper. So EK is just refreshing a few popular models with that nice black brushed cover and lighting. Then the FC RTX 2080 +Ti Classic RGB is a little more than a refresh. This is EK bringing their classic GPU block styling to the RTX lineup, but of course, they are including RGB as well.

In my testing of the Supremacy Classic RGB CPU block and the XRES 140 SPC PWM Classic RGB, I was really happy with the performance improvement over our GPU test benches former configuration. It also added a little more style. The Asus Apex motherboard already had a few LEDs but the lighting looked great. I took a few pictures of them in action below. The CPU block is dominated by the lighting, as is the pump area on the pump/res combo, but the fade while going up into the reservoir is a nice look. Of course, if you don’t care at all about RGB you can just never plug any of it in. Personally, I’m most likely to go with white or orange lighting to match our Wetbench. 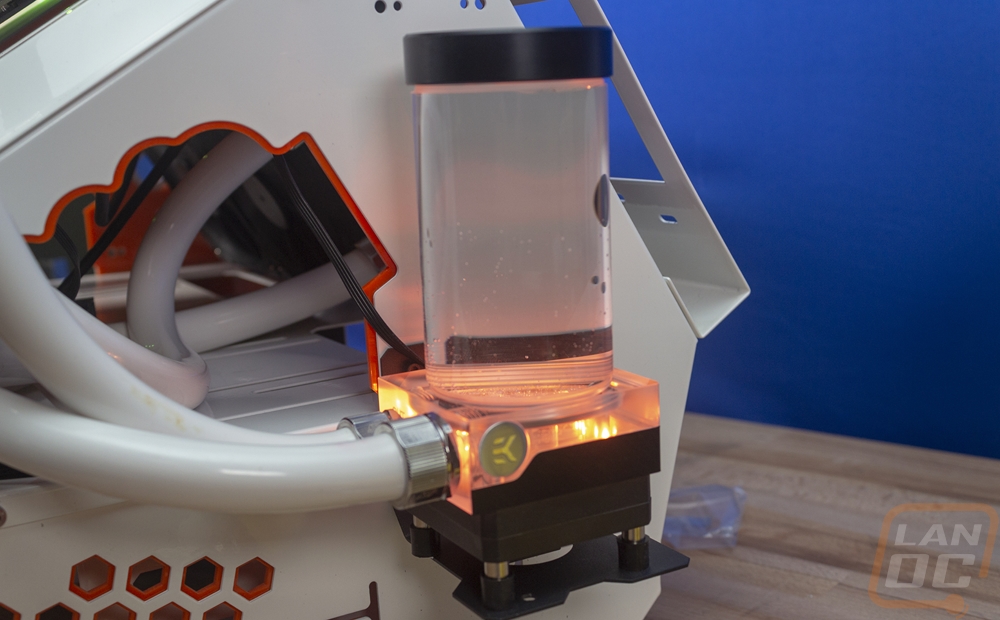 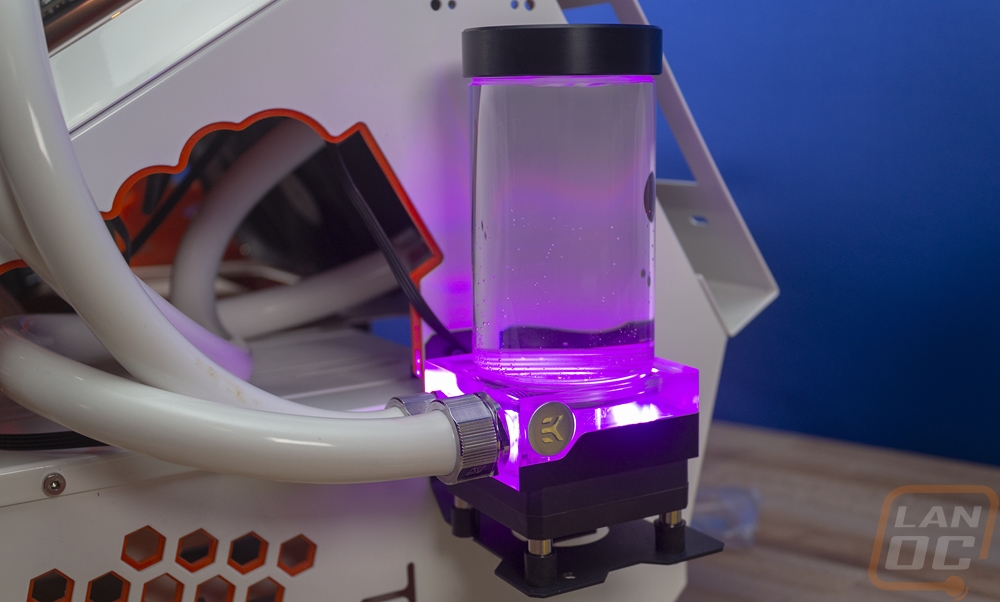 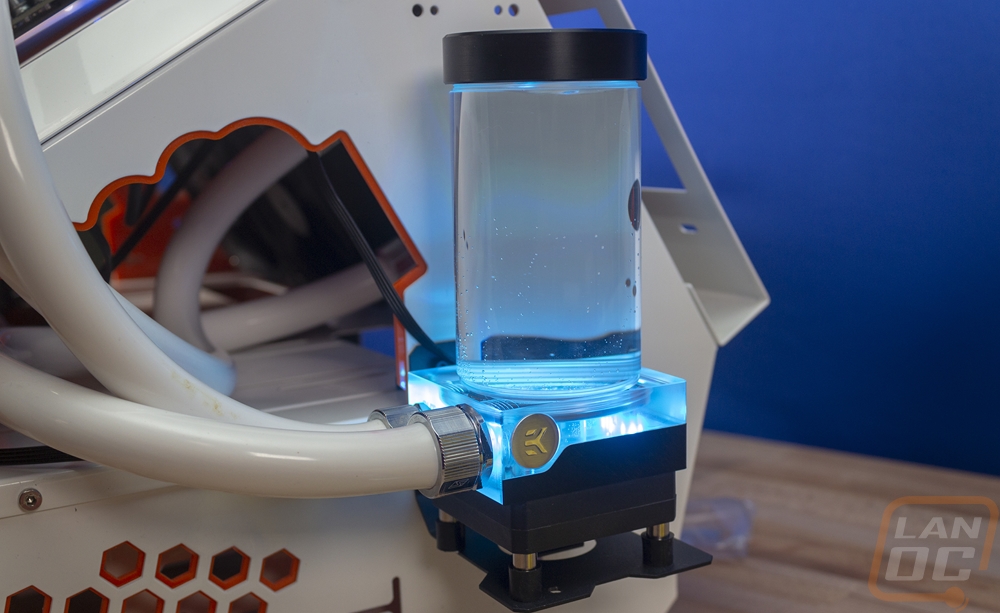 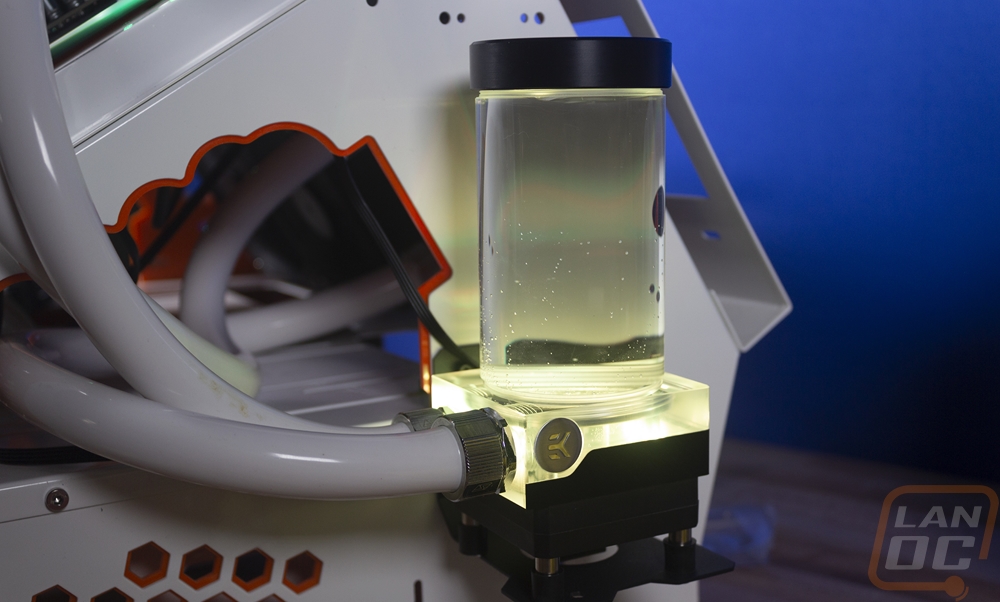 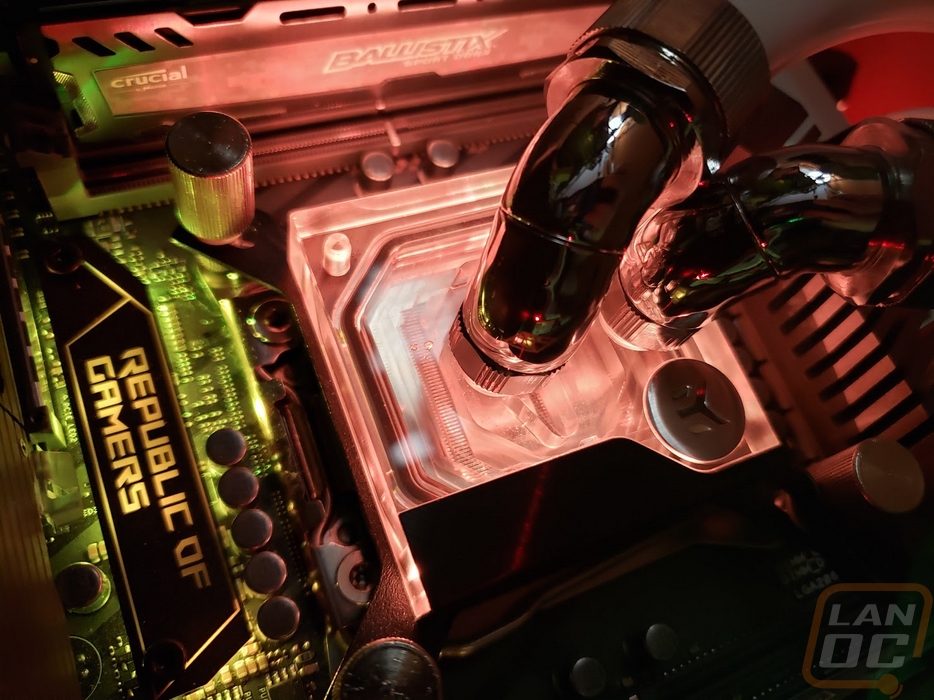 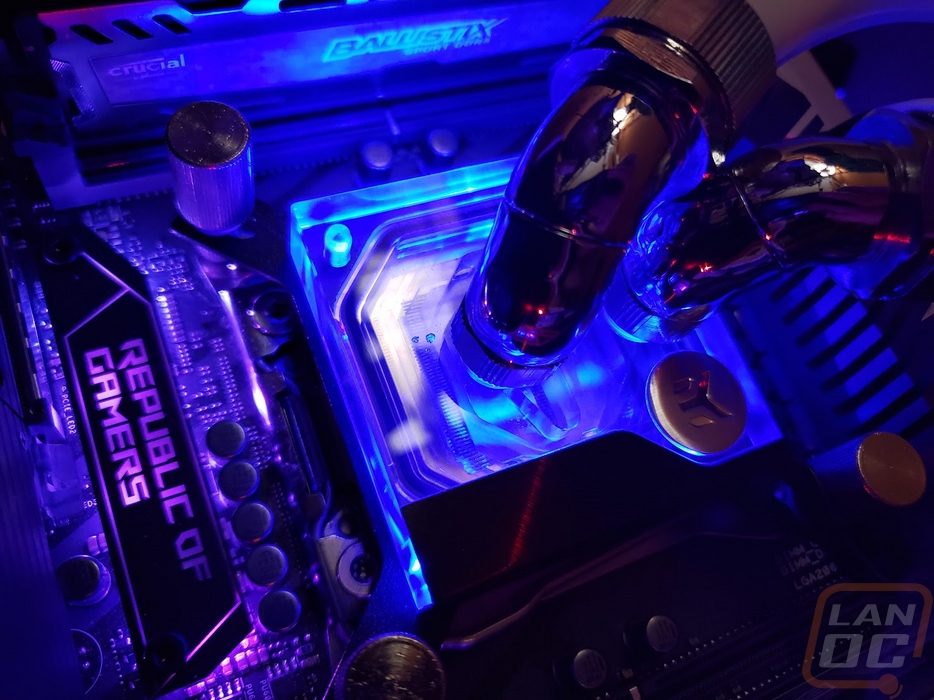 I was really curious where all of these would fit into the EK lineup price wise so here is a breakdown. First off, the RTX 2080 +Ti waterblock is $50 cheaper than their current Vector line of water blocks. It is also nice that it supports both the RTX 2080 and the RTX 2080 Ti, previously these were two different blocks. Not that I imagine anyone other than a reviewer would ever have both to swap between the two. Both Supremacy Classic RGB CPU blocks are noticeably cheaper than what is in the EK Supremacy EVO lineup right now. The red and blue models would be the closest to compare with and they are $85.99, a $16 lower price and adding RGB lighting is a nice deal! Same with the XRES 140 which is $94.90 which is basically the same price as the same pump with a 100mm reservoir and no lighting. So in addition to bringing back some of the classic EK styling and adding RGB, the Classic lineup is also going to be a nice cheaper option while still getting the same EKWB quality that you expect.

You might call him obsessed or just a hardcore geek. Wes's obsession with gaming hardware and gadgets isn't anything new, he could be found taking things apart even as a child. When not poking around in PC's he can be found playing League of Legends, Awesomenauts, or Civilization 5 or watching a wide variety of TV shows and Movies. A car guy at heart, the same things that draw him into tweaking cars apply when building good looking fast computers. If you are interested in writing for Wes here at LanOC you can reach out to him directly using our contact form.
Discuss this article
Log in to comment
Posts in discussion: EKWB Classic RGB Lineup

We have 682 guests and one member online