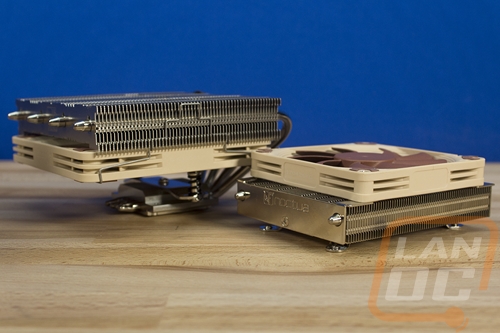 The packaging section with Noctua coolers isn’t really where you come for surprises unless of course, you have never seen one before. Noctua has stuck with their brown and black on the front with white trim for a while now, with the big change previously being no white and just more black. So both the NH-L9a-AM43 and NH-L12S both have the same look with the exception of the model name on the front and the different specs and information in the list on the front. Then there is also the box sizes, the NH-L9a-AM4 is actually sitting up on its thin edge to match the L12S’s size, it is about 1/3 of the size. 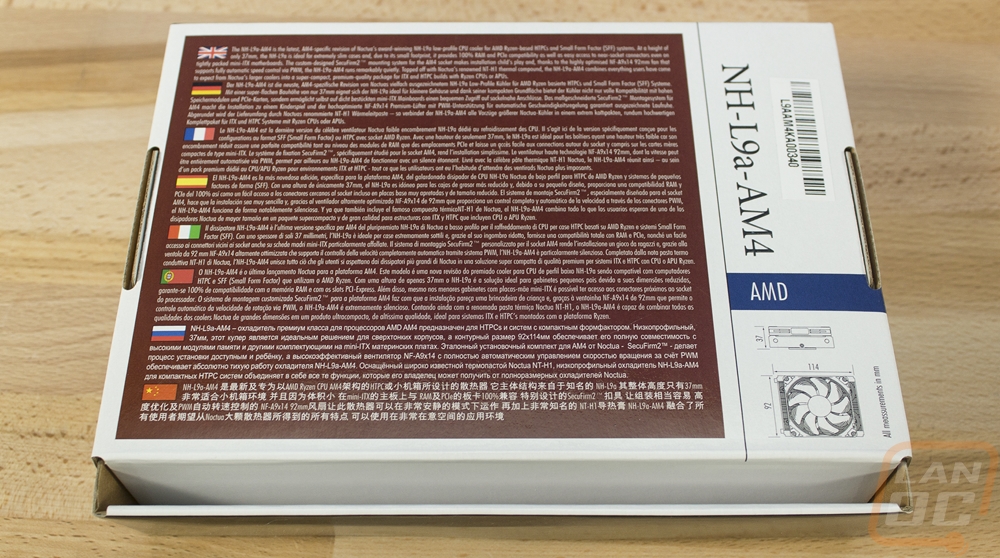 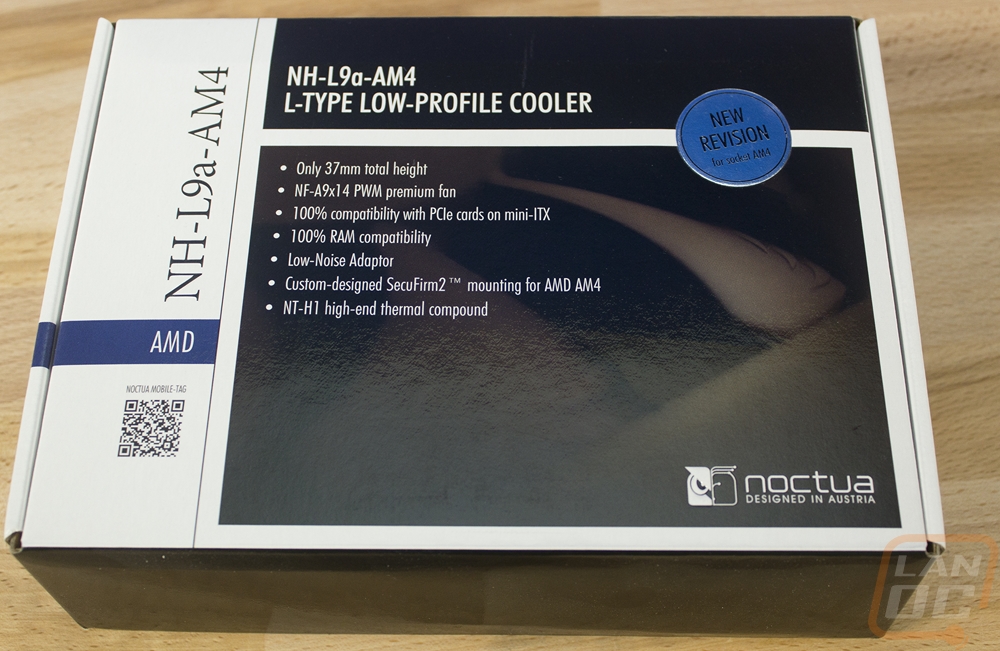 So what does the L9a-AM4 come with? Well when you open it up, unlike most other Noctua coolers you can see just about everything right away. The cooler is in the center mounted in the foam. On the left, you have a low-speed fan adapter and on the right a full tube of thermal paste. It is still to this day not normal to see a full tube come with a heatsink because thermal paste itself sells for a decent amount but Noctua has always included it. So you can go back later and clean and reapply. Up in the top, the instructions are folded up and clipped in place. Then you also get a thick all-metal painted case badge. 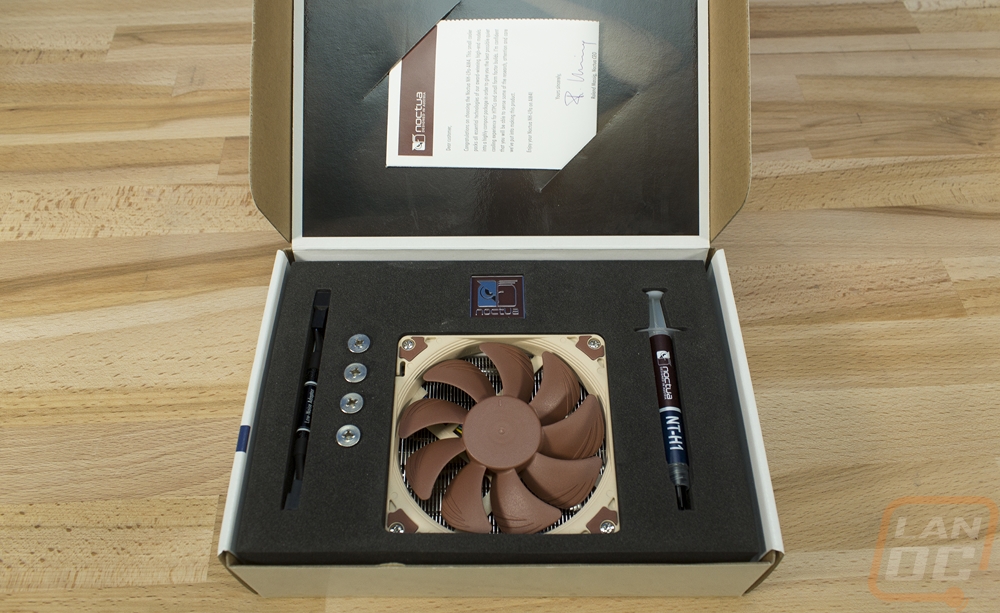 For hardware, the L9a-AM4 doesn’t need 50 different mounting brackets. This is designed specifically for the AM4 boards for Ryzen. If you want an Intel cooler it is a different model and then you also have the older AMD model for all of the previous sockets as well. You get a thick metal backplate and then four screws, that’s it for heatsink mounting. There is also a small baggie of screws that allow you to install a thicker fan if you want to add more airflow, but keep in mind you will be giving up the ultra-thin design that this heatsink is all about.

The NH-L12S’s box is a lot larger but like I mentioned has the same theme going on the outside. They do have a sticker mentioning this is the successor to the NH-L12 that we covered all the way back in 2012. The side of the box does have a few line drawings with highlights of the heatsinks features on it. They also made sure to include a full specification listing for the heatsink and fan as well as a list of everything in the box. 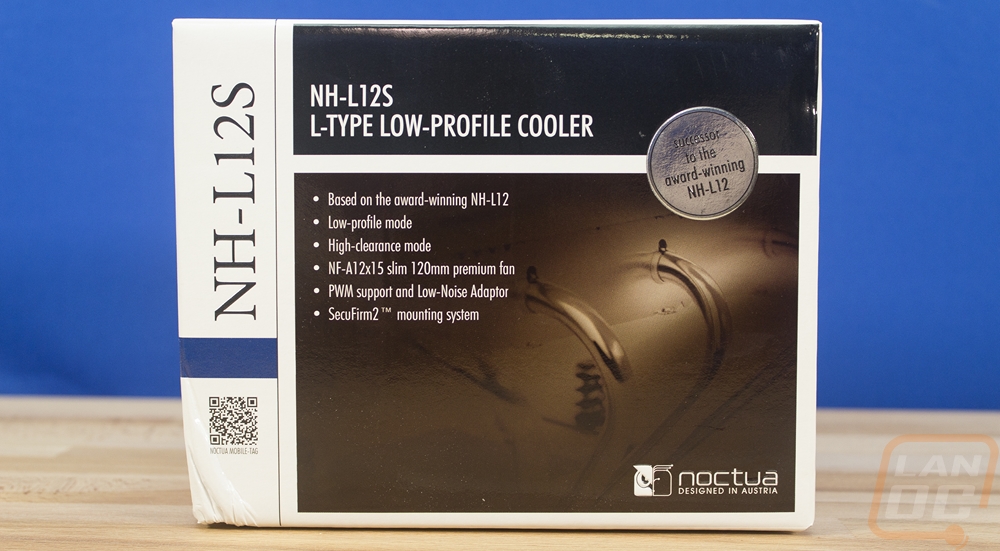 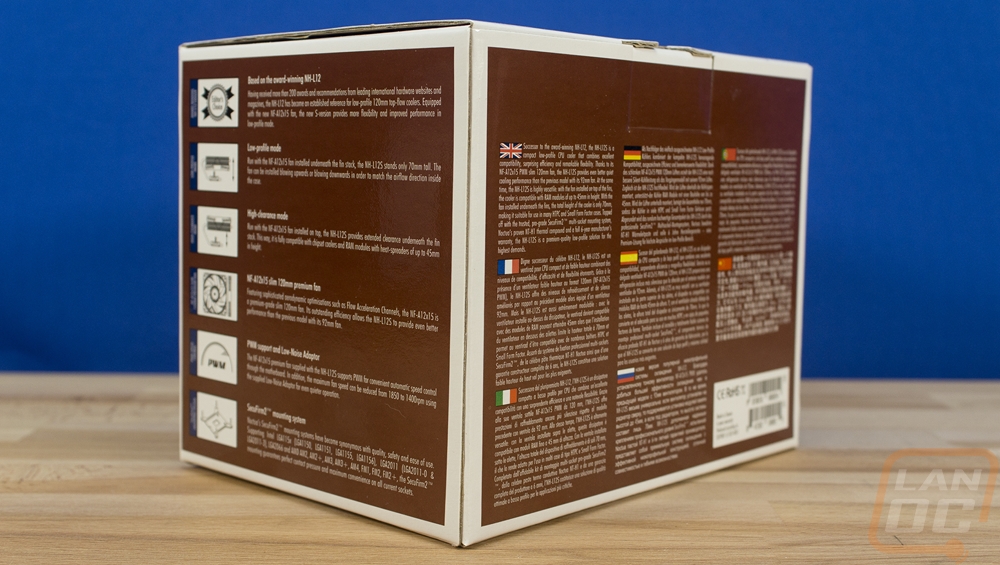 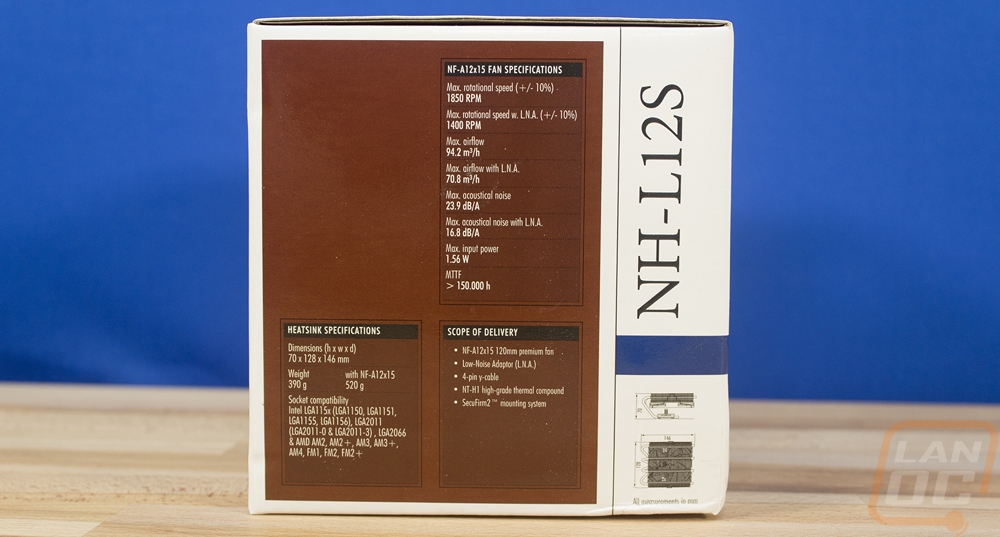 Getting into the box though you will find just a bunch of cardboard. You have to start pulling things out to find things like the heatsink. As you can see here, even pulled out they have this thing jam-packed with cardboard to keep it safe. 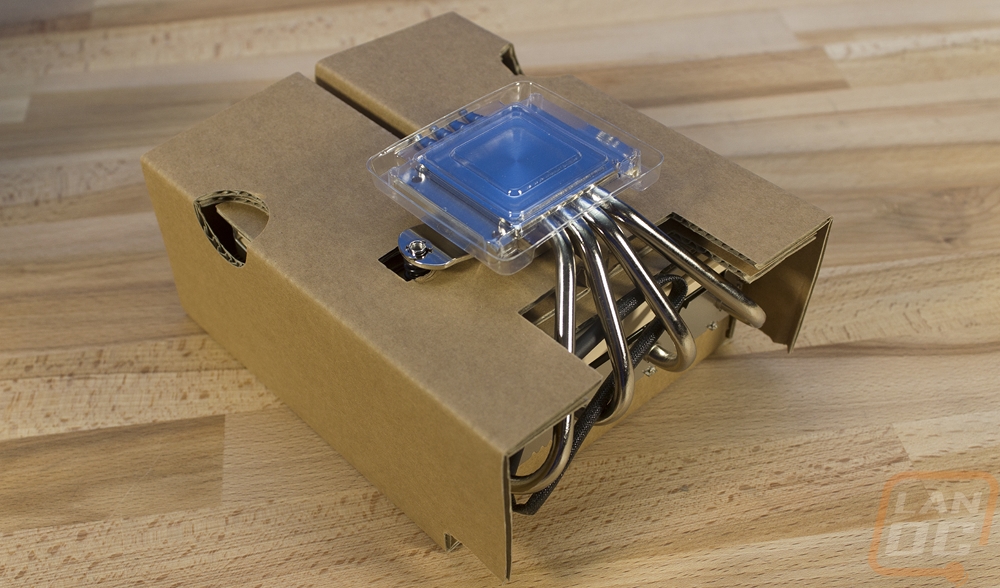 So the L12S has mounting for AMD and Intel and because of that it actually needs a box to hold all of the mounting parts and accessories, unlike the L9a-AM4. Inside the box, you get four small instruction books that all have a note from the CEO on the front as well as a red tag in the top corner to show you which socket each is for. 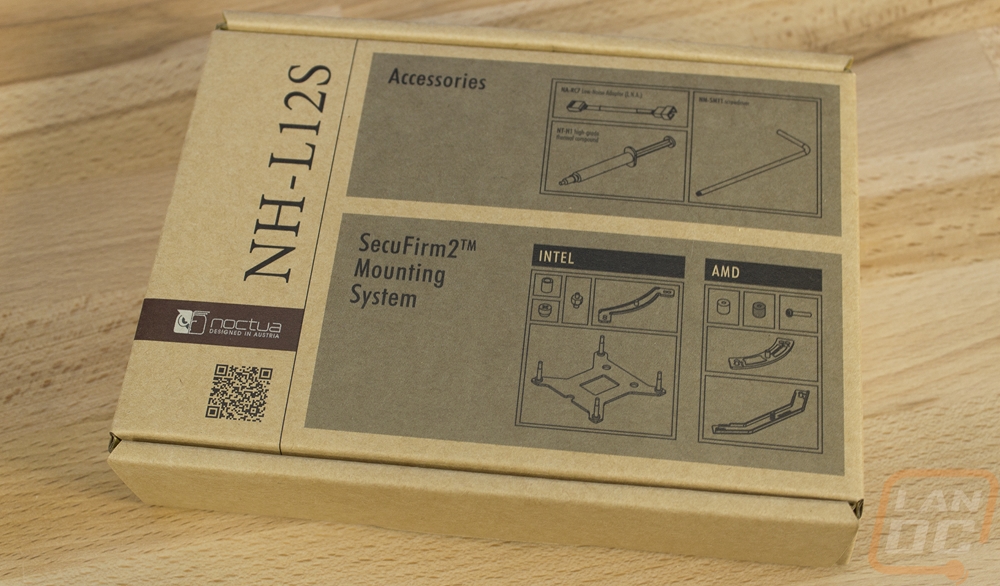 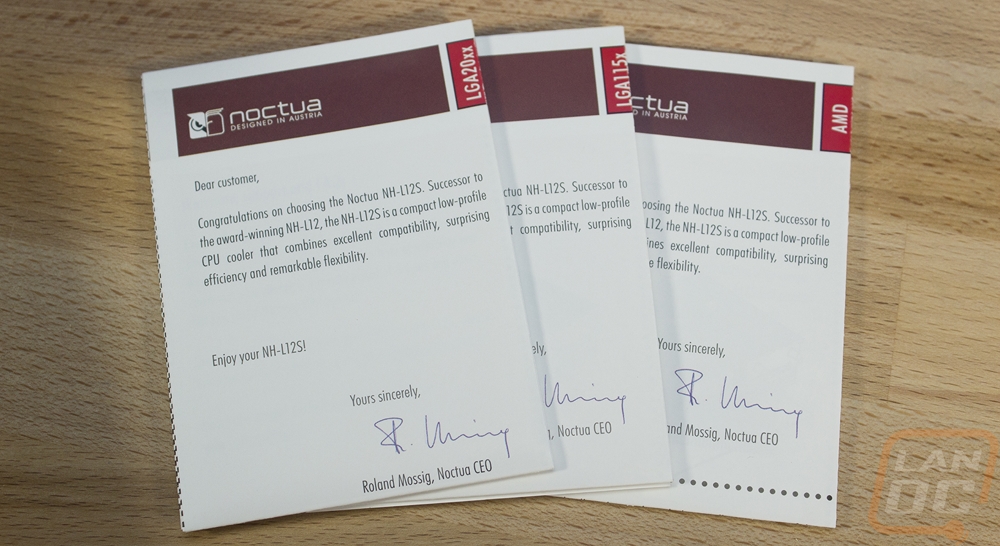 So this is all of the mounting brackets for both of the Intel kits. Most of the room is taken up by the backplate for the normal 1150/1151 socketed CPUs. I love Noctua’s design here because they integrate the posts into the backplate so you slide it on from the back and you can get the brackets sitting on the posts right away. The LGA2011 kit is also here but is basically just screw in adapters for the socket bracket. Then the two brackets to the left work with both sockets to adapt to the two post of the coolers. This kit works with basically all of Noctua’s product lineup other than the low profile designs from the L9 lineup.

The AMD set is what I will be using for testing today and as you can see you get both thin and wide brackets. With AMD using a rectangle shaped socket mount, they have to include both so you aren’t limited to mounting in just one orientation. 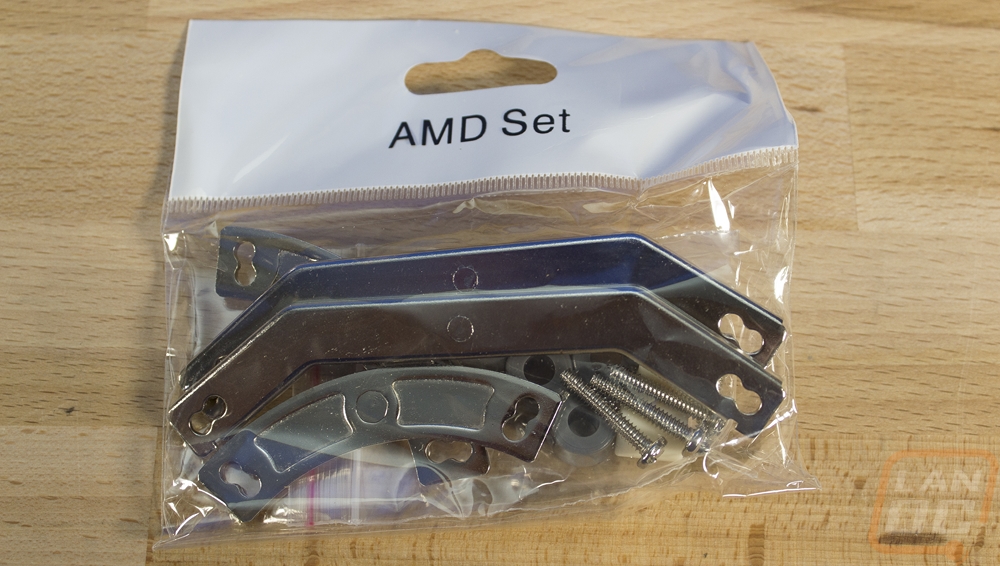 You get a full tube of thermal paste as always, the awesome Noctua case badge that is all metal and painted, and a fan adapter just like the other cooler. They also include a screwdriver as well. This simple design works well and because of the length, it can sometimes help a lot with Noctua’s coolers because some screwdrivers can’t fit down to the brackets with the tall coolers. Of course, the L12S isn’t tall so you could use your normal screwdriver if you wanted.