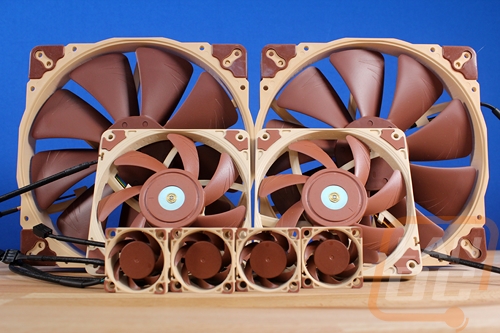 It isn’t very often that Noctua brings out new products. They tend to spend a long time developing everything and they won’t bring things out until they are basically perfect. Hell, it’s hard to believe that their IndustrialPPC and Redux fans came out 3 years ago. So the new introductions were focused on expanding their A-series of fans with 200mm, 120mm, and 40mm models. Along with those they also introduced a few new accessories including a small fan controller. With the fans, you may notice that this is actually their first 200mm fans and the 120 and 40mm models expand on both of those already existing areas in their product lineup with new thin 120mm fans and higher pressure 40mm fans. I was sold just with the introduction of the new 120mm 15mm thick slim fans, but I reached out to check out the whole range. So today I’m going to check out the new fans to see what Noctua has going on. 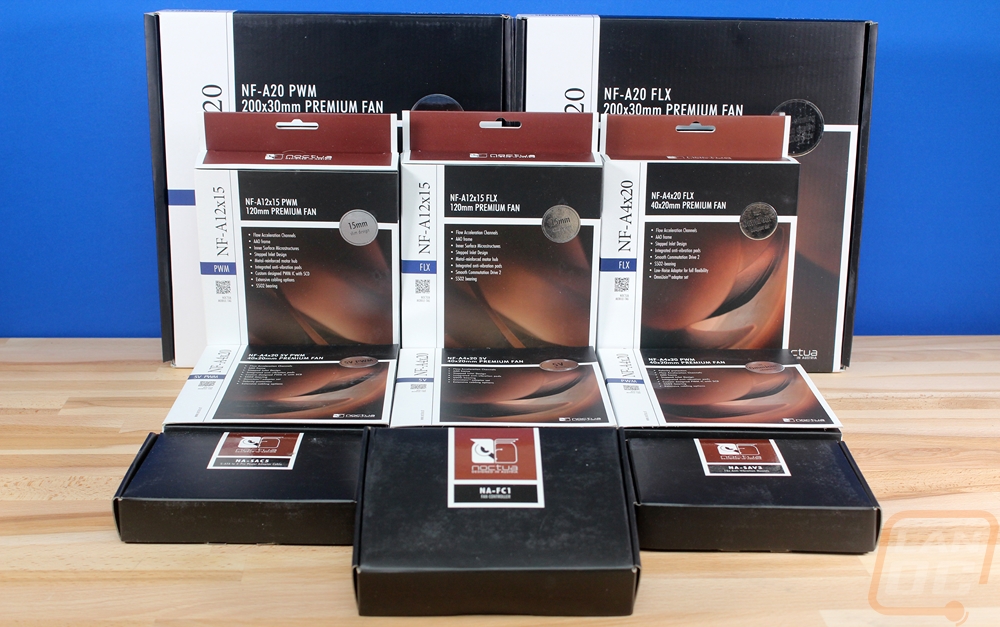 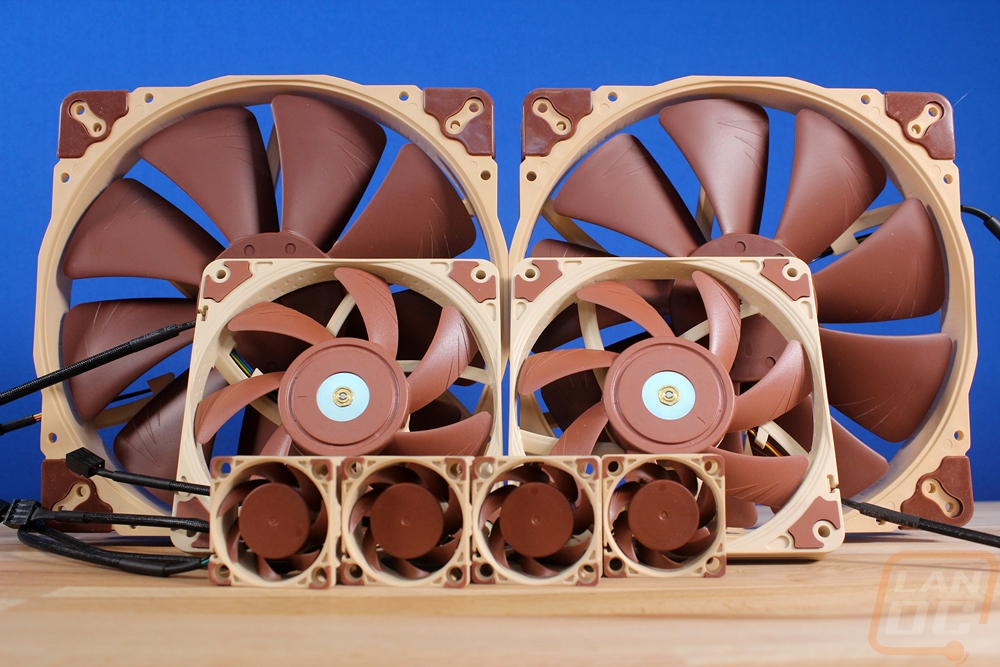 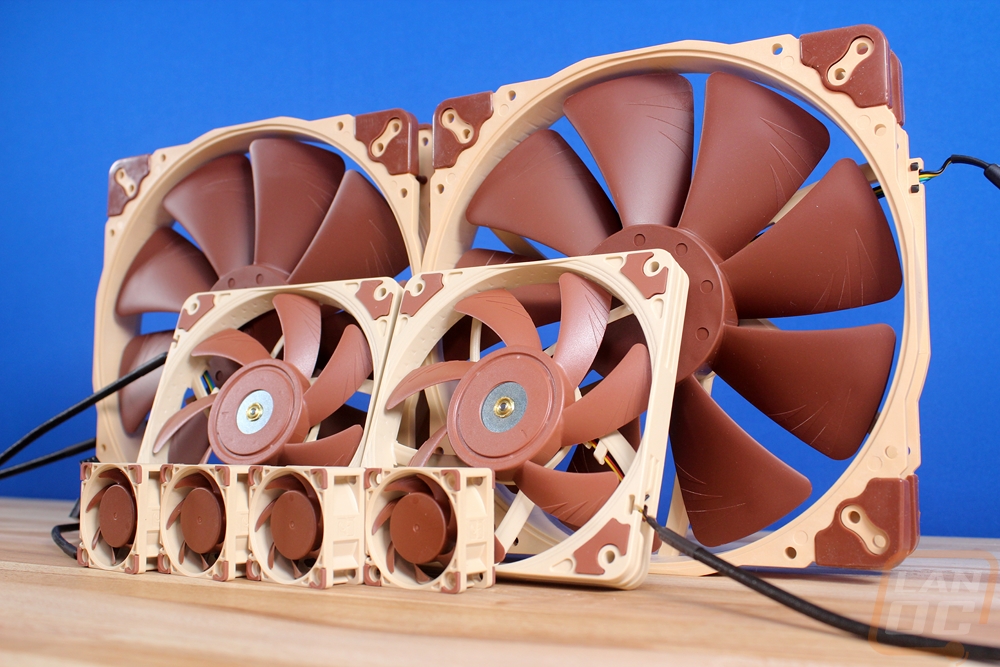 So most of Noctua’s accessories are various mounting kits, Y cables, Low Noise Adapters, and their Chromax colored accessories. So the new fan controller was a bit of a surprise. The NA-FC1 isn’t going to run in a bay or even in a PCI slot like older fan controllers. The NA-FC1 is just a small box. You have two status indicators, one for power and then the orange LED that gives you a visual indication of where you have the speed set. You then have the speed control knob in the middle and a small button below it that turns on a “no stop” mode that doesn’t let your fans drop below 300 RPM and turn off. What was interesting to me though was the three-way splitter included with the controller. In addition to a power cable and a fan extension cable to pull a signal from your motherboard, you can actually use this fan controller for a total of three fans at once. Personally, I normally stick with motherboard controls, but if you need a few extra fans and you would prefer to not run them at 100% fan speed this isn’t too bad of an option. The pricing is a little higher than I expected with it coming in just below $20, but the controller itself is great. 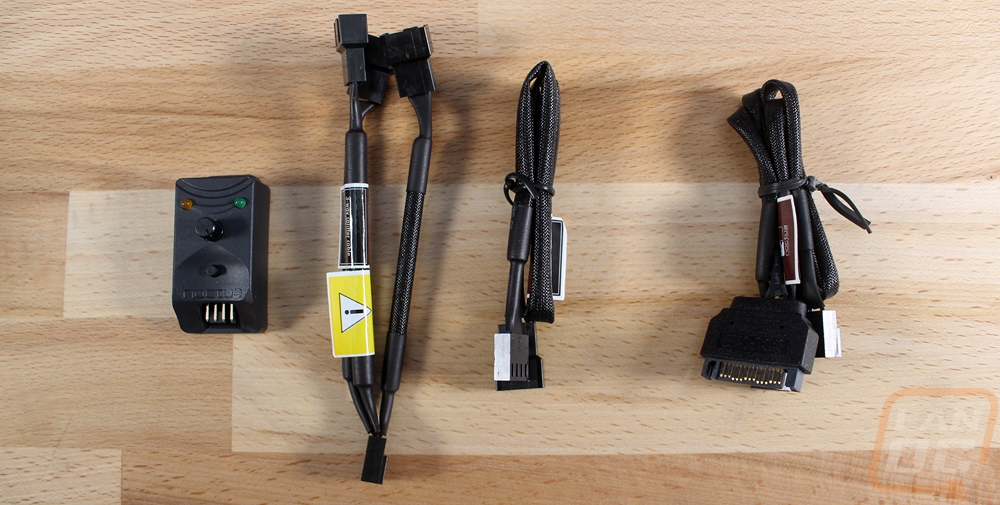 The SATA power to 4-pin adapter is as basic as they come, but a nice option to have available. Especially when most people like myself at most have Molex to 3-pin adapters floating around. With this, you might be able to avoid having to bust out a Molex cable for your power supply. Plus Noctua did a nice job with the sleeving. Noctua also suggests using the NA-SYC1 Y-Cable with this adapter as well to power up to three fans off one SATA if needed.

Then the last two accessory boxes were filled with the new NA-SAV3 and NA-SAV4 silicone anti-vibration mounts. Noctua normally includes anti-vibration mounts with all but their Redux line of fans. These are just new designs that have multiple bumps to allow support for various fan thicknesses now including the new 15mm thick 120mm fans. 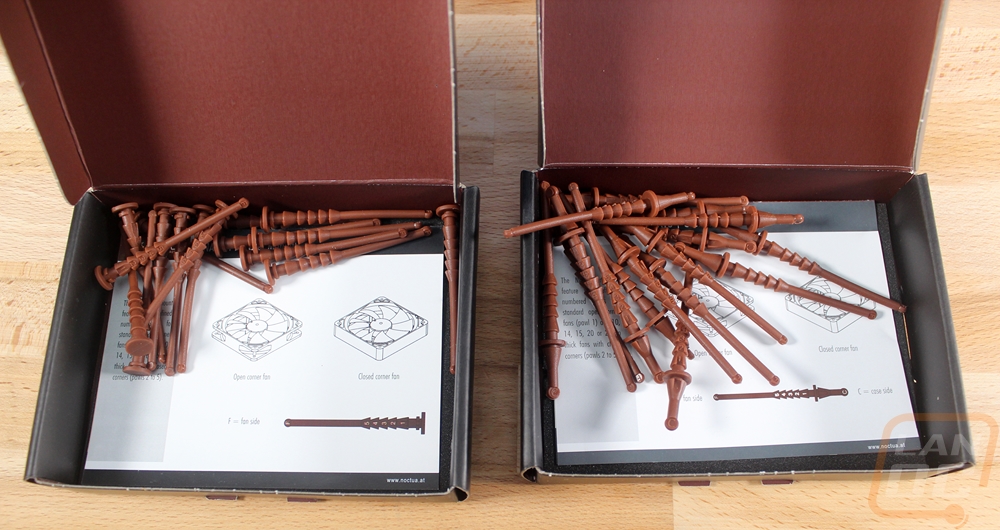 So if it hasn’t been obvious so far, this isn’t a full review and I’m not doing performance testing though I did play around with all of the fans. Today I’m just checking out the new designs to see what they are all about. I split them up into the three sizes to make things a little easier to check out, starting with the 40mm fans.

Like the 120mm fans, the new 40mm fans are actually just expanding on Noctua's already existing products. In fact, their 40mm fans are extremely popular in the 3D Printing market as upgrades for Hot-End fans. They introduced four new models, the NF-A4x20 PWM, NF-A4x20 FLX, NF-A4x20 5V PWM, and the NF-A4x20 5V. They all have the same $14.90 USD price point and they are all the same size 40x40x20. The past Noctua 40mm fans were exclusively 10mm thick. So the new models might not be the first choice for 3D Printing due to the thicker size, but the big improvement is their higher pressure. Noctua has them rated at 2.26 for their mm H2O rating where the older models were 1.78. They are set to run 500 RPM faster at 5000 RPM but shockingly they run quieter at 14.9 dB/A over the 17.9 of the 40x10 models. The reason they have four new models is because they have two 12 volt models and two 5v models, each in a 3-pin and a 4-pin PWM variation.

I love the packaging for all of them, you get a box that looks like a normal 120mm Noctua fan but when you open it up you are greeted with this tiny window with what as my wife described it as the world's cutest fan behind the window. Now you still have the standard Noctua colors that always get people fired up. In this form factor, it doesn’t matter too much though. The fans then come with silicon anti-vibration mounts and a whole collection of Noctua adapter cables just like every other Noctua fan. 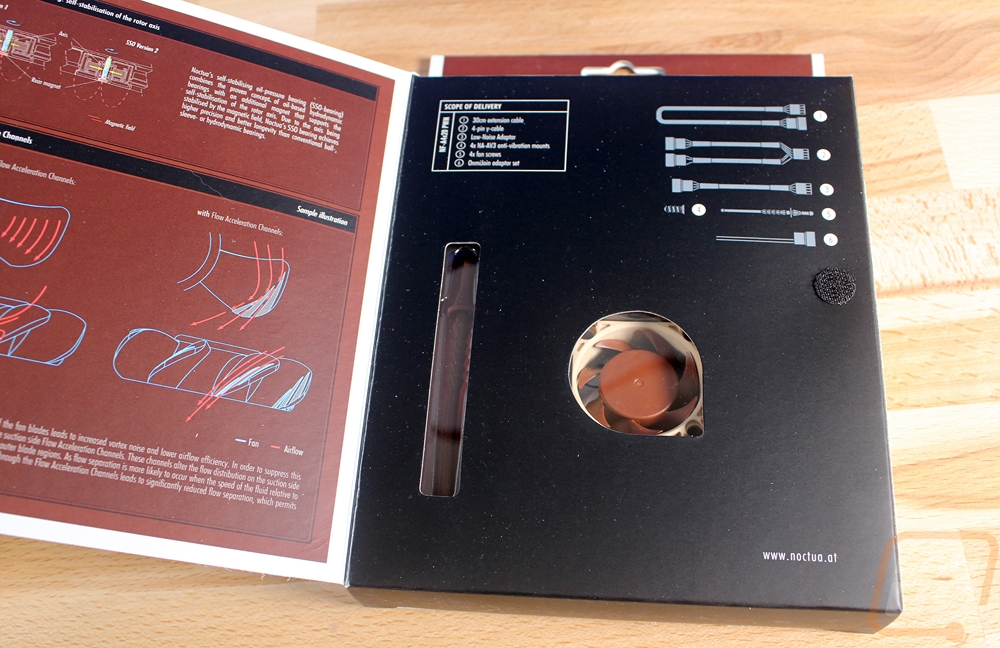 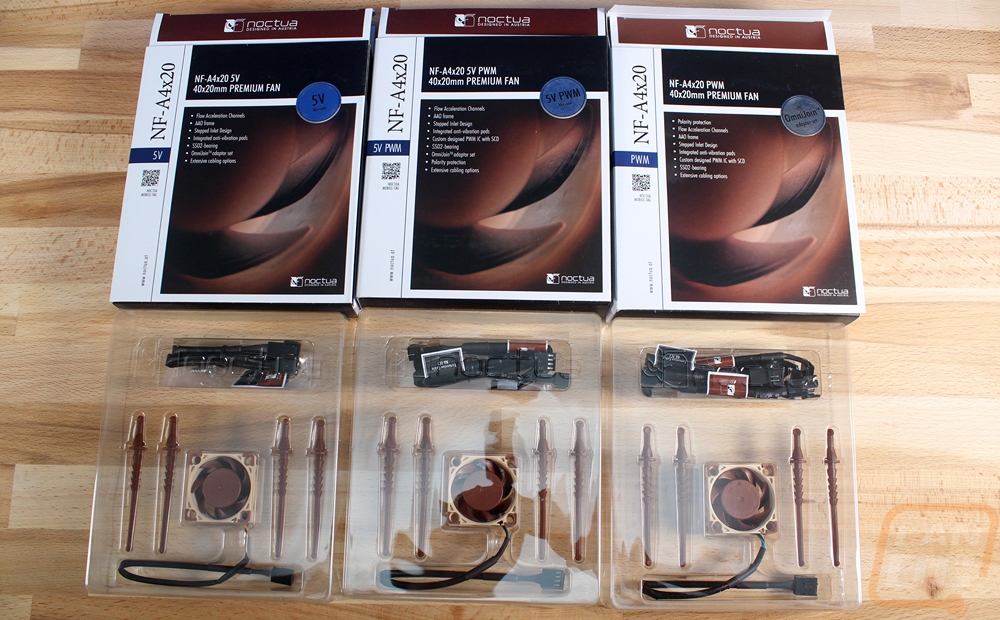 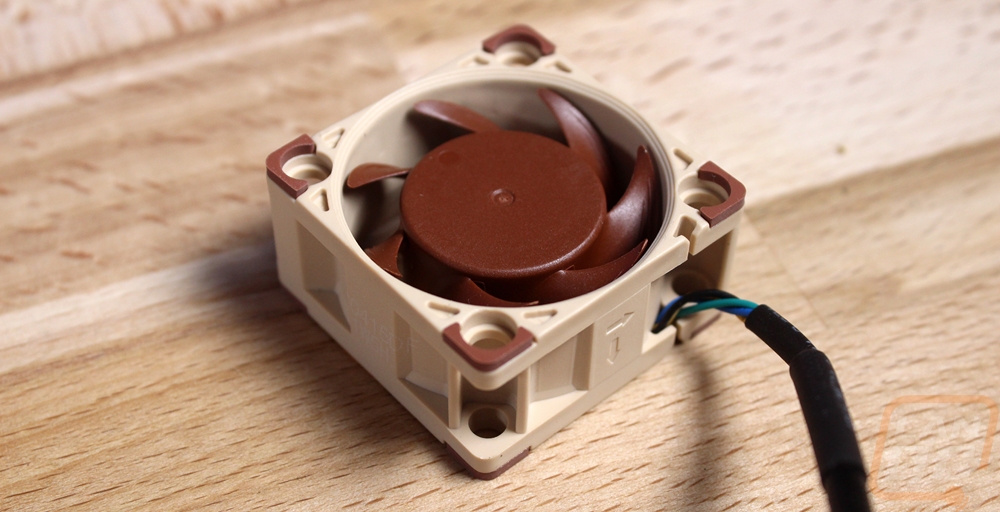 Next, we have the two new 120mm slim fans with NF-A12x15 PWM and NF-A12x15 FLX for their model names. The model names basically break down what the difference is between the two models. One is a 4-pin PWM and the other is a 3-pin flex. They are both 120x120x15mm and you can tell even just looking through the window in the packaging that these are a little different. The metal ring in the middle is new to this model. They still have the brown on brown colors and in this specific size, it is a much bigger deal as a lot of PC enthusiasts like to keep their builds all matching and nothing but brown goes with brown. The metal we see in the center is a steel reinforcement in the hub along with a brass axle mount to give more stability. They needed to strengthen this to run tighter tolerances. This allowed them to bump up the speed slightly and actually get really close to Noctua’s other 120mm fans in performance. The 15mm variants both have a noise rating of 23.9 dB/A, a flow of 94.2, and a pressure rating of 1.53. For comparison, the NF-F12 has the 93.4 for airflow (though its pressure is much better) at 22.4 dB/A. The NF-P12 is quieter at 19.8 dB/A but has 92.3 for flow and 1.68 for pressure. A thin fan with the performance of a 25mm fan is really exciting for SFF builds especially. In fact, I’m going to have to get a few more for a few current builds. 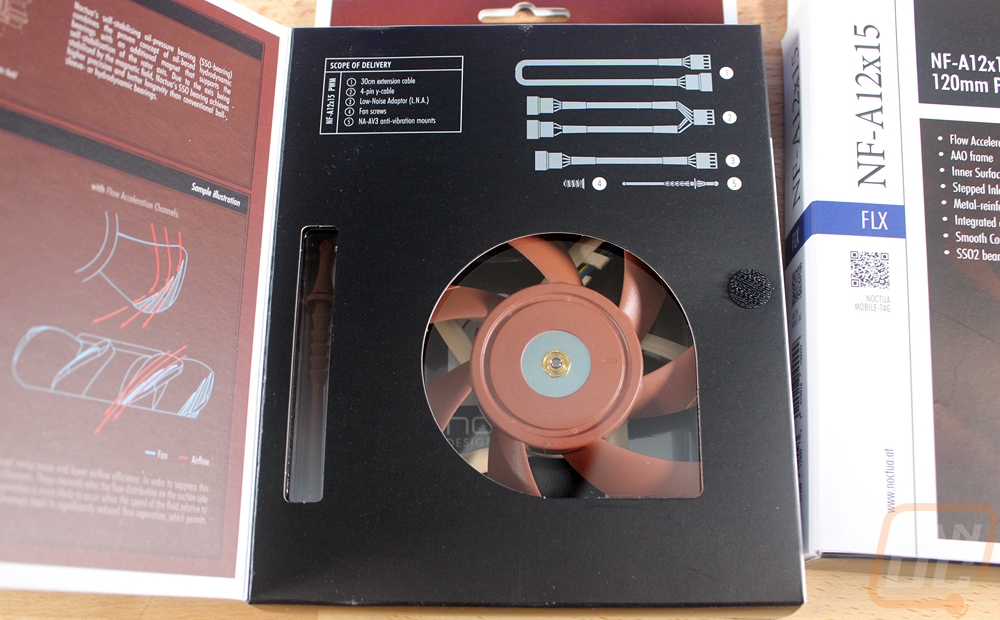 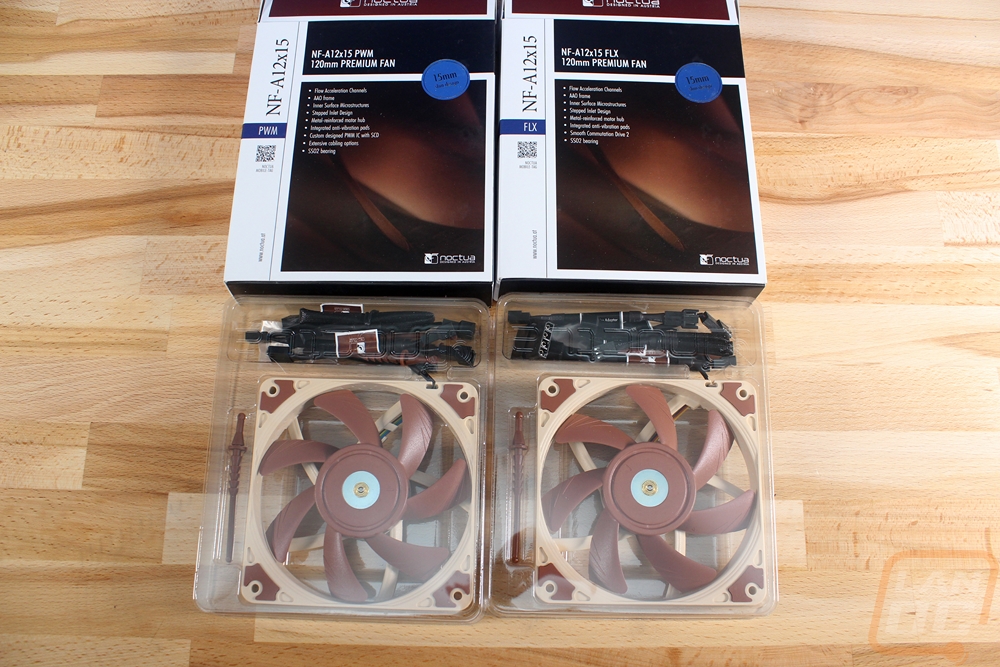 I snapped a few pictures of the fans when playing with them as well. I also went and dug out an NF-F12 industrialPPC for comparison with a standard sized Noctua fan and their NF-A9x14 PWM 14mm thick 92mm fan that they use on a few of their SFF coolers. Both 15mm 120mm fans have a $19.90 USD MSRP, that is basically in line with Noctua pricing and IMO well worth it for anyone who needs a good performing thin fan for an SFF build. 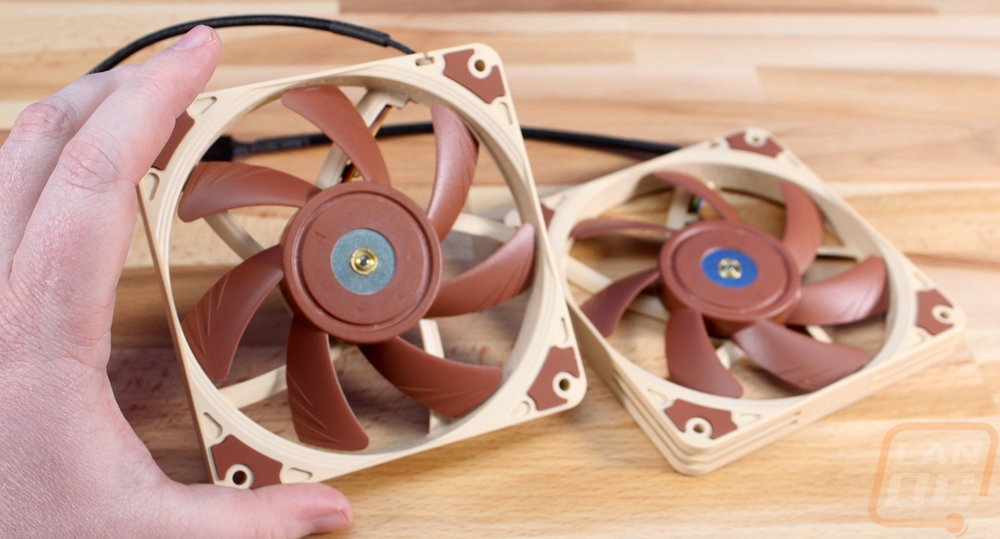 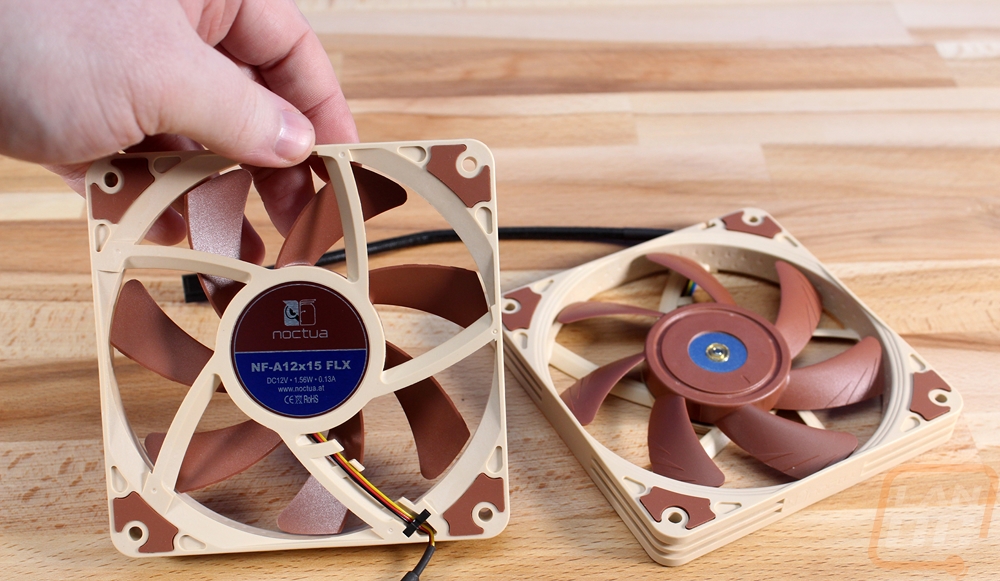 The last fans in the pile were the two huge 200mm fans. I know some of you might be wondering what cases these are even for. Honestly, when they were first shown off back in 2014 it was looking like every case would be moving to these huge fans. Larger fans push lots of airflow while still running quiet, that’s why we went from the small 80mm fans back in the day all the way up to the 120mm and 140mm options you see in most cases now. The reason these took so long was because the impeller has four times the mass of the 120 and 140mm fans. This put a lot more load on the bearing. They overcame this by increasing the diameter of the bearing from 3mm to 4mm to help distribute the additional load. They also went with a fiberglass reinforced polypropylene (PP) material for the impeller to drop the weight down 26%. It’s crazy that these even made it to market, Noctua has been showing off prototypes for three years now. I just wish there were more radiator options in the 200mm size, it could make for some interesting builds. The 200mm fan hasn’t gone away Cooler Master has especially used it a lot in the past and even brought it back this Computex with the new HAF case. All of those people with 200mm fans from a few years back now have a great option to lower their noise levels or replace a dead fan. I’ve seen a lot of them have broken blades or just be completely dead, I think the larger size didn’t really help the life of the fans. The NF-A20 PWM and NF-A20 FLX both have 6-year warranties so it looks like Noctua is confident in them. They run at 800 RPM and have impressive numbers with 11.1 dB/A for noise, 146.9 for flow, and 1.08 for pressure. 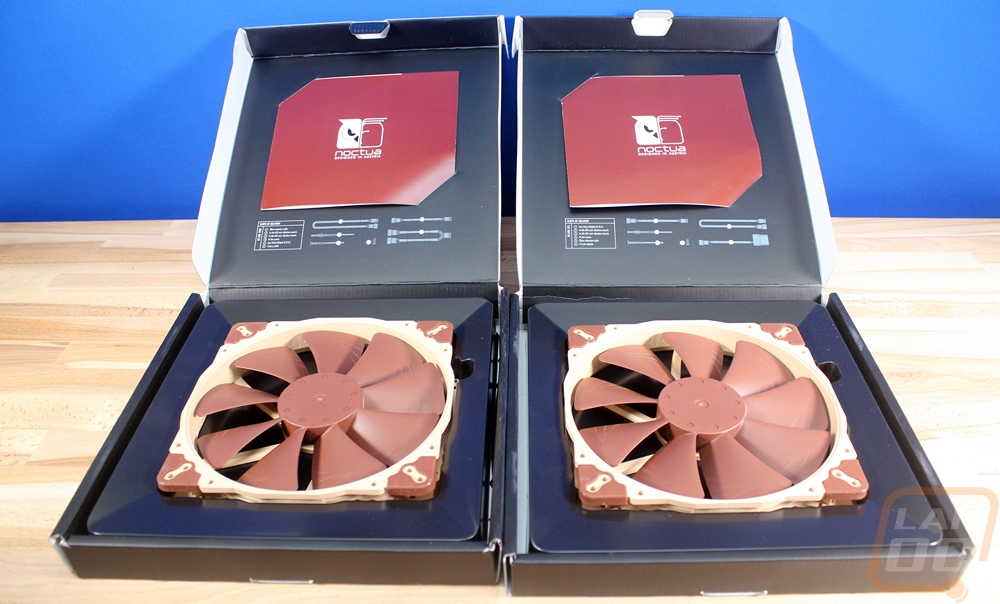 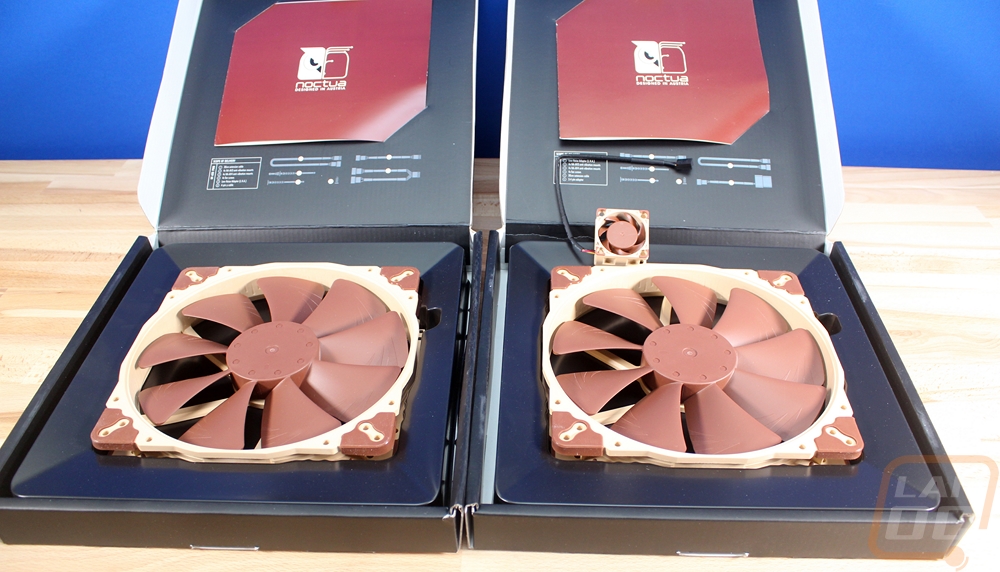 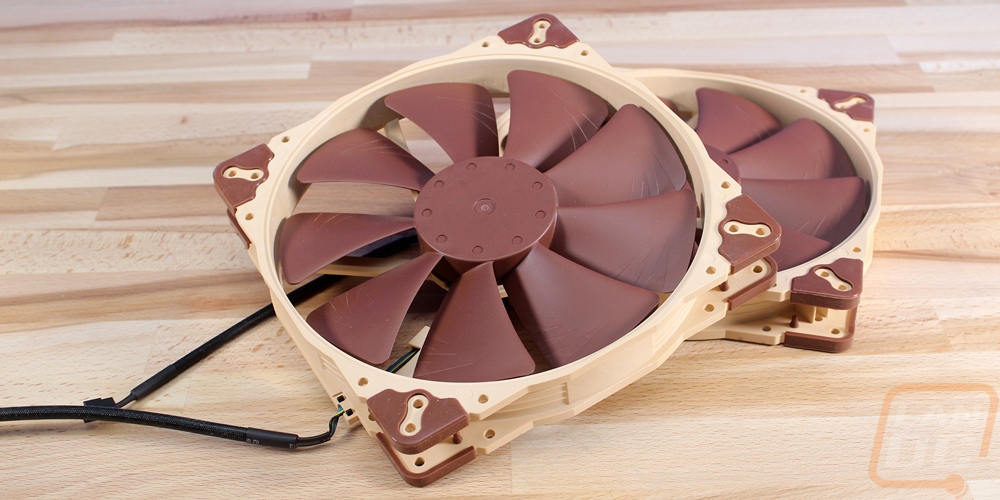 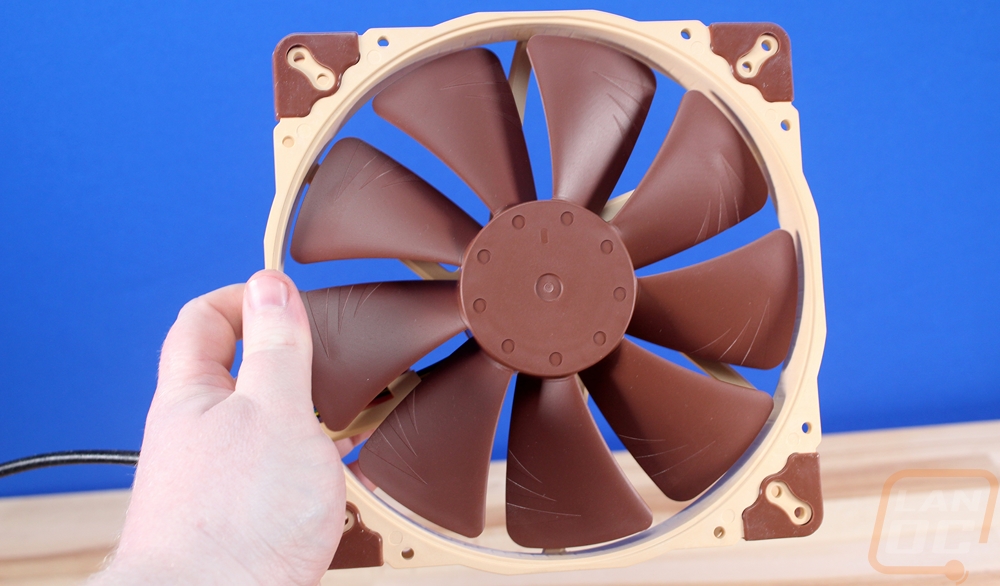 You might call him obsessed or just a hardcore geek. Wes's obsession with gaming hardware and gadgets isn't anything new, he could be found taking things apart even as a child. When not poking around in PC's he can be found playing League of Legends, Awesomenauts, or Civilization 5 or watching a wide variety of TV shows and Movies. A car guy at heart, the same things that draw him into tweaking cars apply when building good looking fast computers. If you are interested in writing for Wes here at LanOC you can reach out to him directly using our contact form.
Discuss this article
Log in to comment
Posts in discussion: Noctua A-Series Fans and Accessories

We have 965 guests and one member online