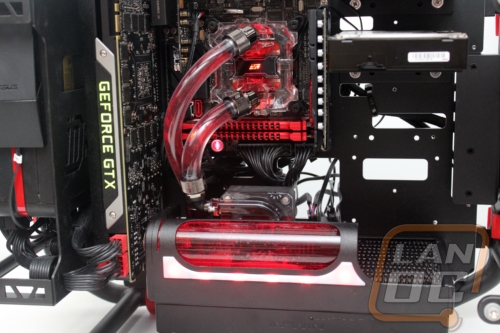 Before diving into all of the individual features I did want to go over the different models that Swiftech has available. Specifically, because when getting in this kit I was a little confused and I would hate to see anyone else be as well. Typically, when looking at water cooling or radiators when I think of a 240 I think of a double 120mm fan radiator. This gets more complicated when you start going up in fan sizes and going with 3 fans as well. Well with the H220 X2 the sizing breads down a little differently. The H is consistent but the first number represents the number of fans. In this case it is 2 but they have a few available with three as well. Then from there the second and third number show us the fan size so for the H220 is uses 120mm fans and the H240 uses 140mm fans. The X2 at the end shows us that this is the latest model as they did have the H220 in the past as well as the H220 X. Then for our kit we are checking out the Prestige model, Prestige upgrades the kit with Swiftech’s Lok Seal black chrome compression fittings and upgrades the fans to Noiseblocker NB-eLoop fans.

So what is setting the H220 X2 Prestige apart from all of those other All in One kits you can get? Well Swiftech is actually using all of the normal individual parts that you would get for a custom water cooling loop and putting them all together for you as a bolt in kit. This means the kit is completely upgradeable and things like the pump aren’t integrated into the water block like all of the other AIO kits. The idea is to use higher quality components for quieter performance as well as having the custom look with clear tubing and lighting.

Anyhow let’s start with the waterblock on the H220 X2. Swiftech moved from the Apogee XL to the new Apogee XL2. This new design has a chrome plated copper base that if you look in the photos below is basically a mirror. This alone is a huge difference from most of the normal AIO kits because the finish on their waterblocks are rough and unfinished. The XL2 also now uses clear acrylic, it does still have the black center piece with the Swiftech logo backlit in the middle in RGB. The mounting brackets attached to the clear and chrome waterblock are flat black. I’m a little torn as I think this is a rare case where chrome would look better, but the black should blend in and keep the focus on the waterblock. In the pictures below of the Apogee XL2 we can also get a good look at two of the four compression fittings that going with the prestige kit gets us. Swiftech went with 45 degree angled fittings that look great. Other than how they look compression fittings are less likely to leak because of how they clamp onto your tubing and they allow for you to remove the line multiple times without having to replace clamps. I use the same on our fridge build and haven’t had leaks over the past few years. 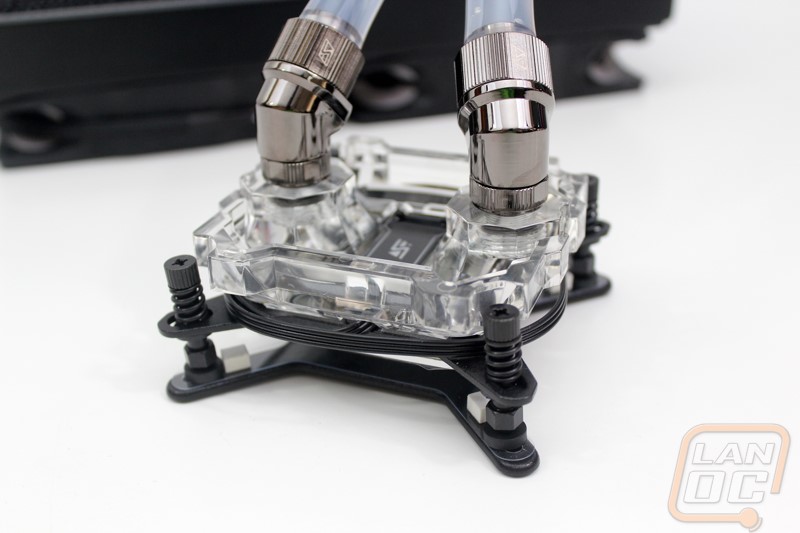 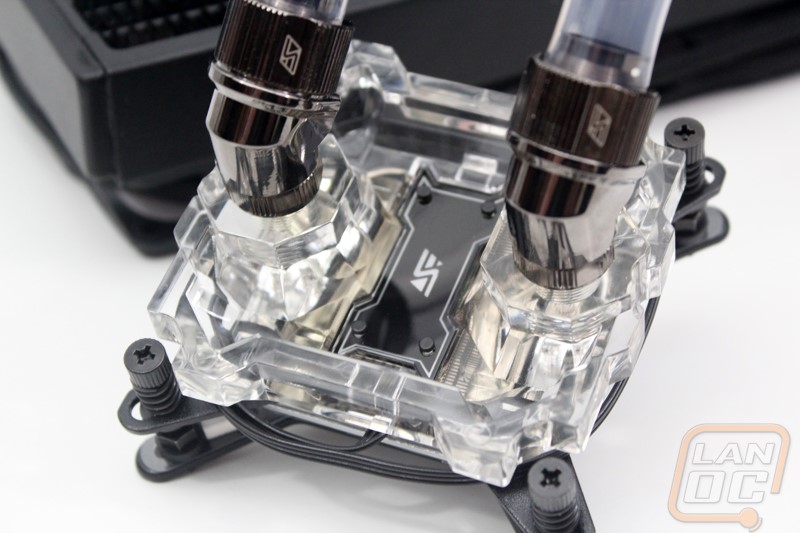 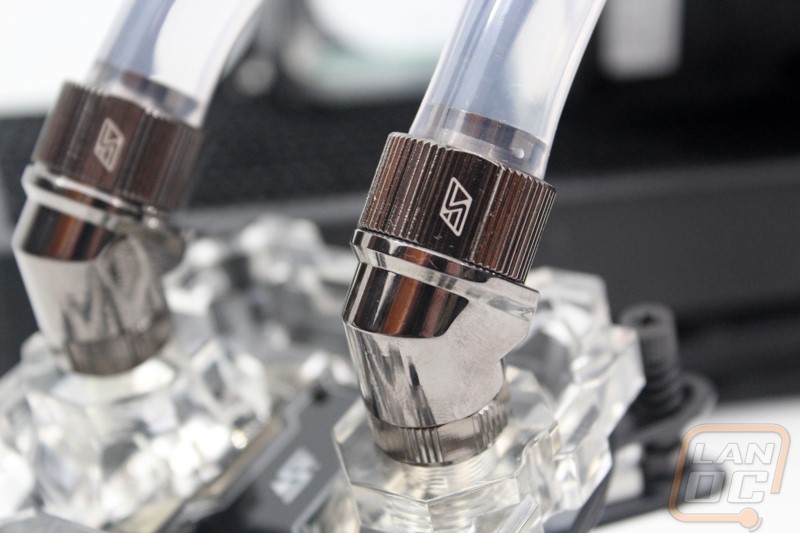 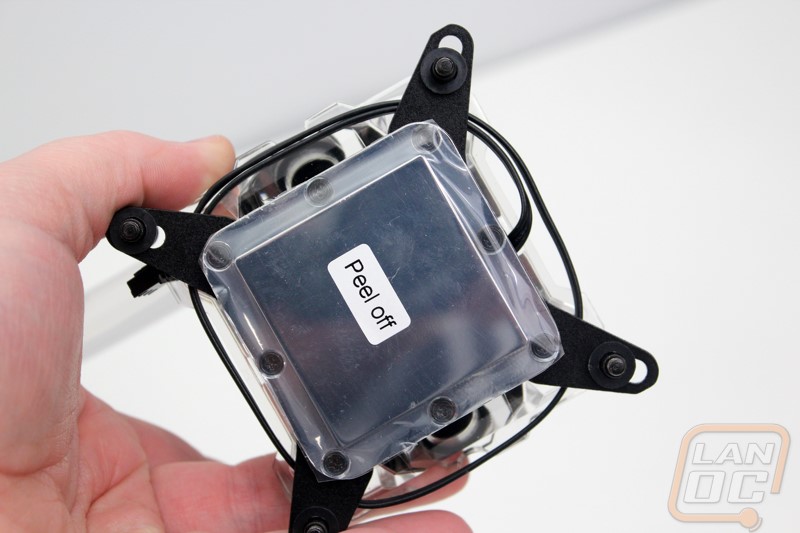 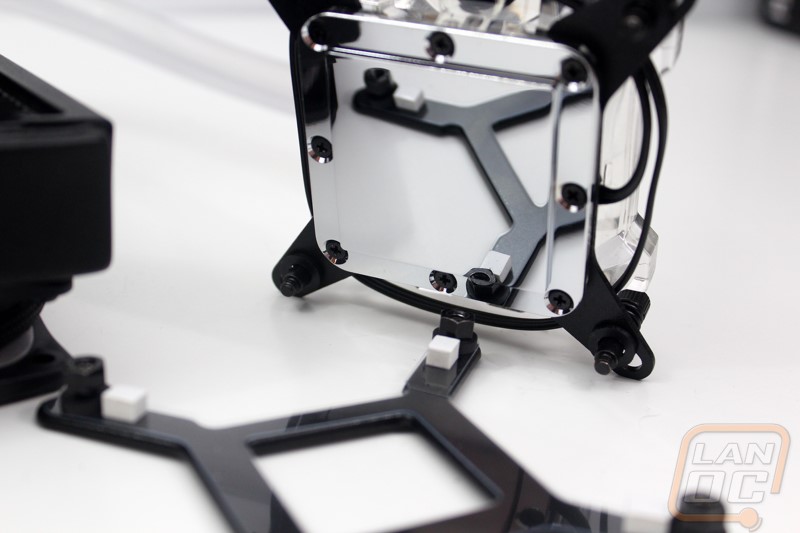 Without having the pump built into the waterblock Swiftech had to find another place for it. I have seen some designs integrate the pump into the end of the radiator but their design is a little different. The radiator comes up and the half-moon reservoir attaches to it then the pump is mounted to that. The metal frame around the reservoir helps hold everything up off of the radiator as well. The design isn’t perfect though, there are two potential flaws. For one if you look down from the top the design does cover up a lot of the airflow room behind the radiator. There is a gap below them so it doesn’t completely block it but I would be shocked if there wasn’t a little restriction, especially when installed in a traditional case. The other issue that concerned me was the black plastic right angled connection for the top coolant line. It would be nice to see the prestige model use a right angle adapter.

If you look close the radiator side of the pump is also transparent giving us full view of the pump impeller. The other unique part of this design is the white strip just below the reservoir that has RGB LEDs behind it. This lighting runs in conjunction with the LED in the waterblock for a little extra lighting in your case. 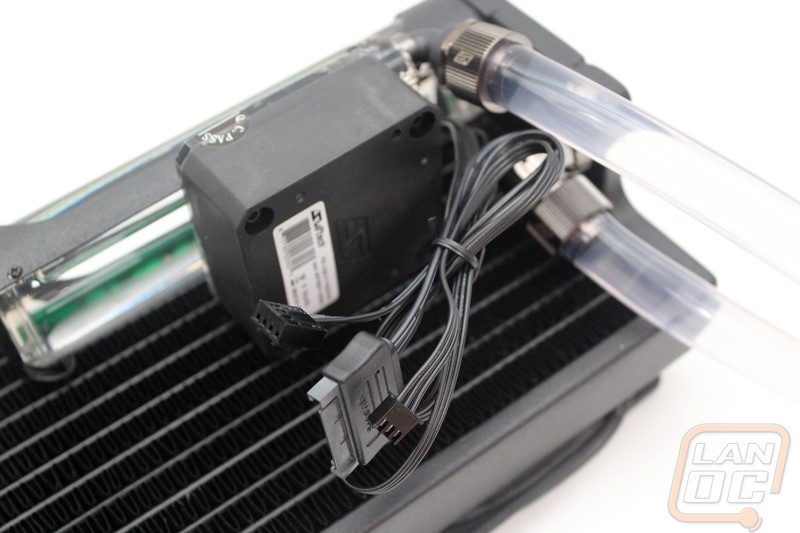 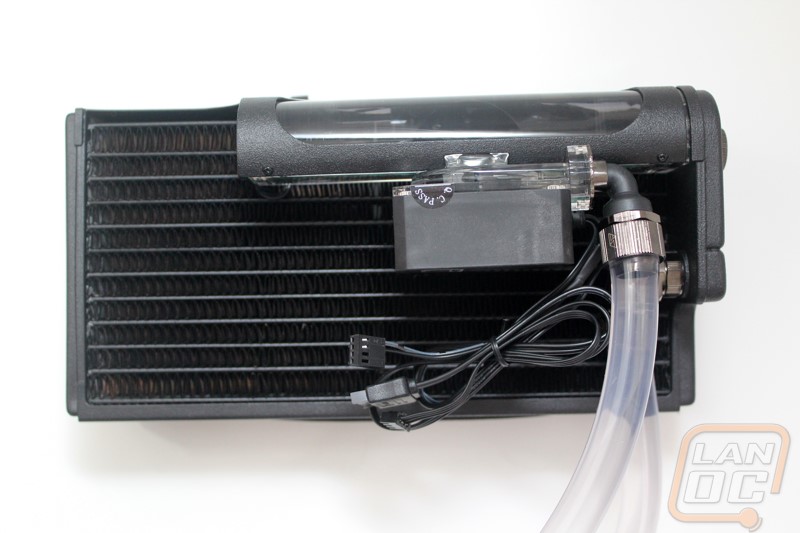 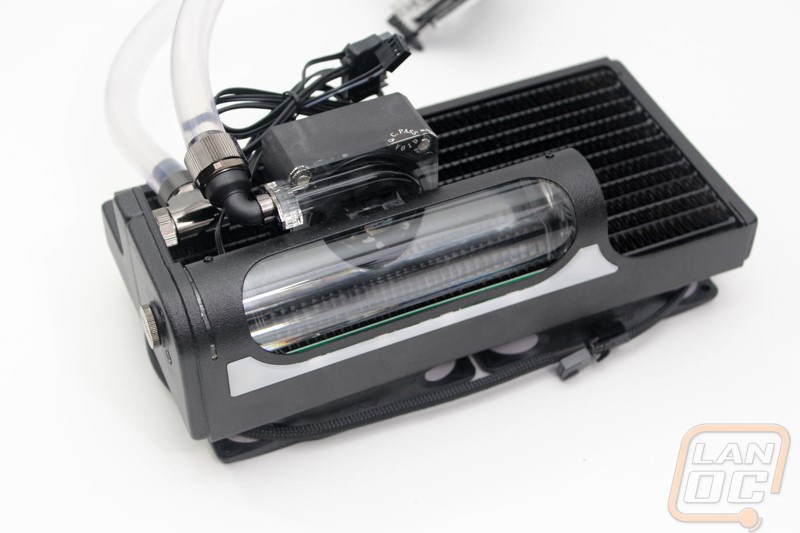 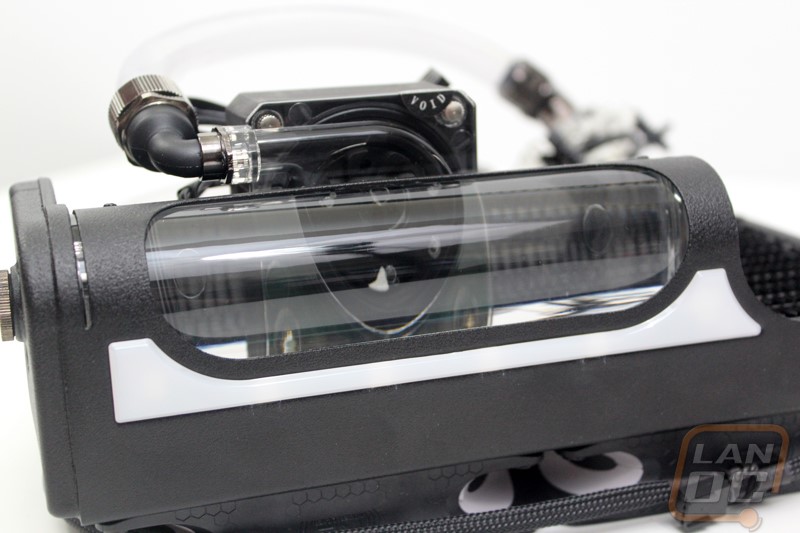 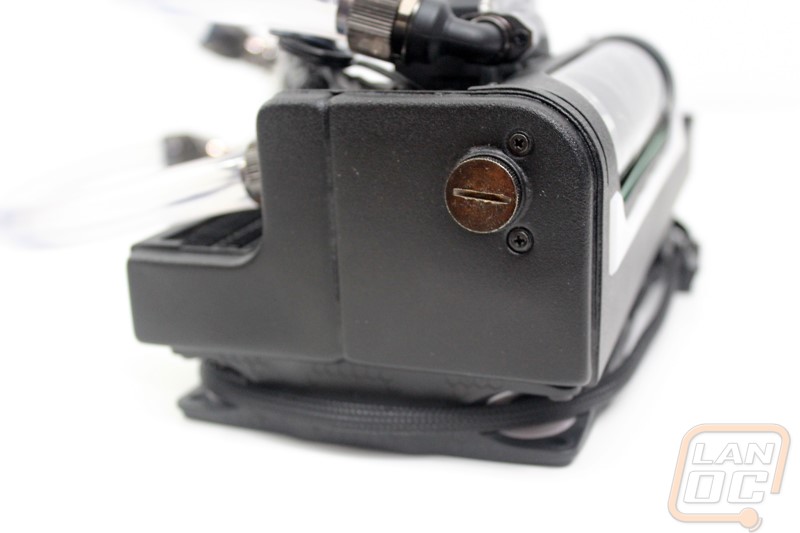 Beyond the compression fittings, the Prestige model does also bring with different fans than past Swiftech kits. Basically Swiftech decided to go with Noiseblocker NB-eLoop fans. These fans are designed in Germany by a company called Blacknoise. Unlike almost every other fan manufacture, they ONLY make and manufacture fans. They are designed to be especially efficient and powerful while also running quiet. Seeing that both cooling performance and noise are big factors when upgrading to water cooling this is a nice addition to the H220 X2 Prestige. I haven’t had any personal experience with the fans but they do have a good reputation so I’m really looking forward to testing them. Aesthetically speaking they are a big departure from standard fans. The biggest part of that is that the blades all connect back together on the outside as well as on the inside portion of the fan rotor. They call this the bionic loop rotor. They also have rubber dampeners on each corner of the casing to help keep vibration down as vibration helps transmit noise as well. 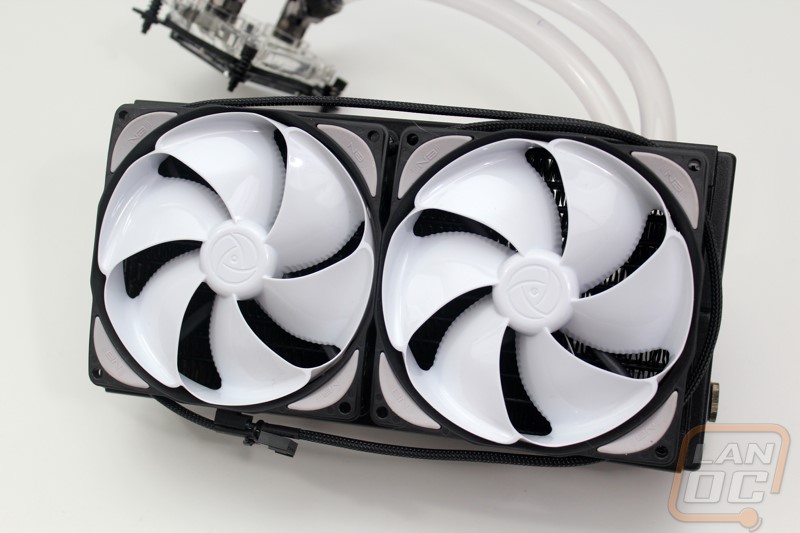 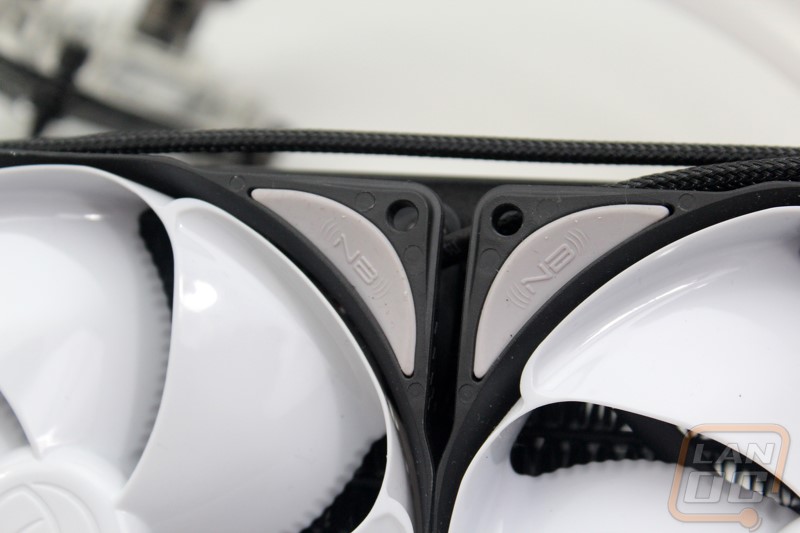 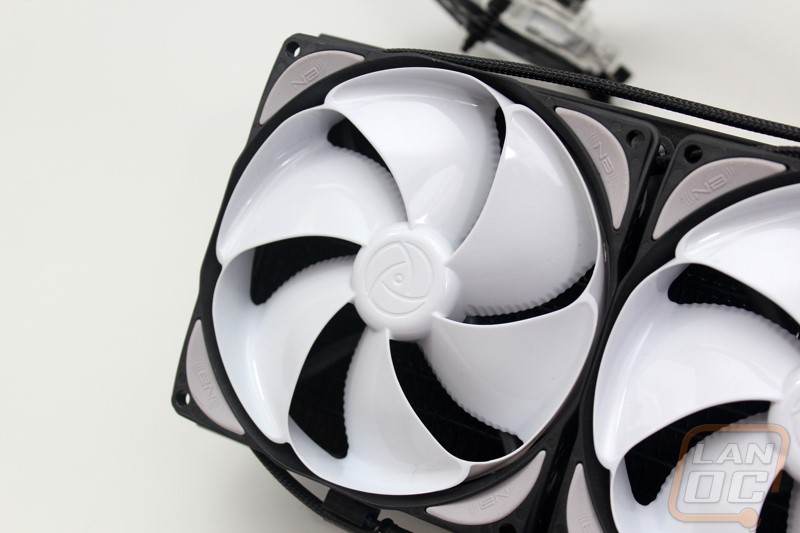 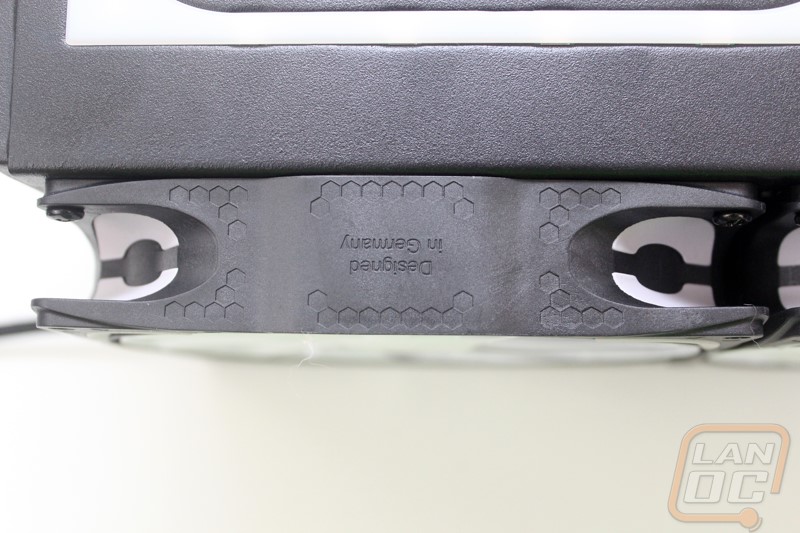 The H220 has changed a lot from when I first saw the kit at CES years ago. A lot of the big changes came with the H220 X that moved to a design with a reservoir bolted to the radiator where the old design just had the reservoir as a taller part of the radiator. The reservoir design was still different with a squared off design. From past experience these tend to make a little noise and create air bubbles where the round design that they now use (and use in custom kits) doesn’t. The original H220 though had the pump on the water block and the big black plastic design. That design ended up causing issues with patent trolls so the new design moved the pump up on the radiator and lets us get a good look at the new waterblock. 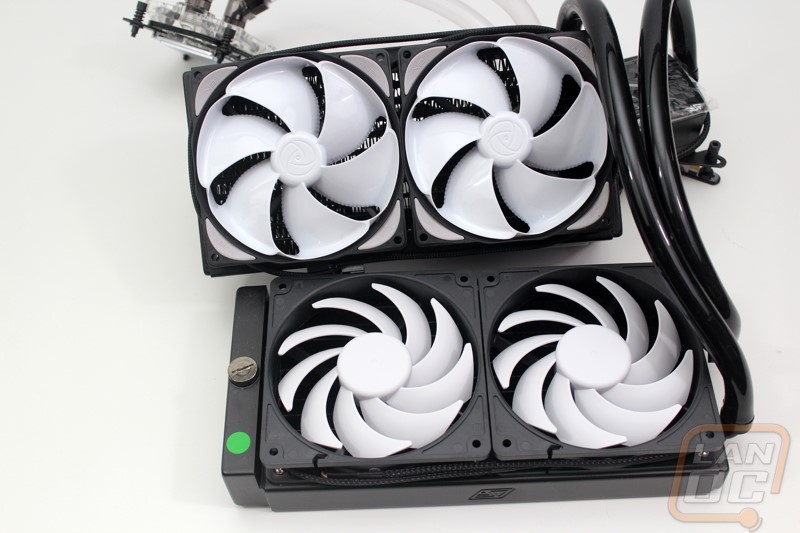 The original H220 was considerably thinner without having the reservoir attached to the radiator but it was also a little thinner than the radiator itself on the new X2. 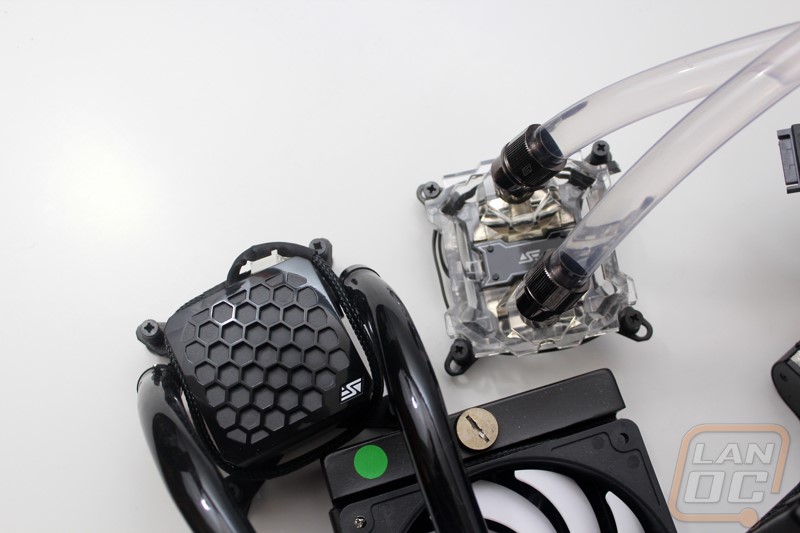 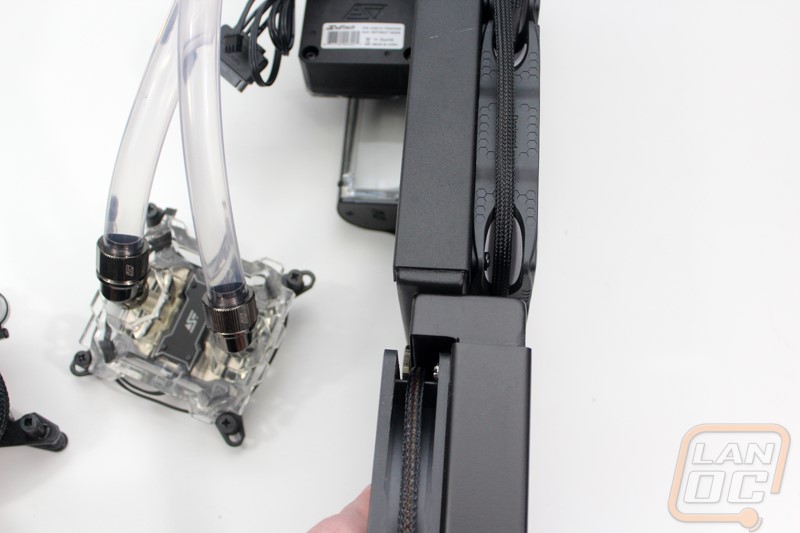