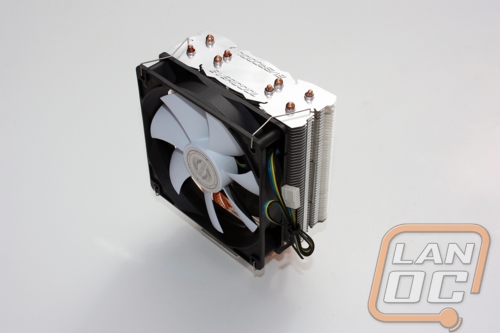 After testing, the Venti finds itself atop the ladder for 120mm CPU coolers we’ve run through our battery and that is an impressive feat for what most would consider to be a small value cooler. Even with only a single fan, the Venti manages to come in at a very thin 68mm which offers much in the way of board real estate which is all too important in the world of air cooling. The direct contact design and the natural looking copper heat pipes are also nice to see and coupled with the powerful included fan the whole package seems to be aimed at pure performance overs on a budget.

The backplate installation is a chore to be sure and something I would like to see improvements made on. The included fan, as previously stated, is just as loud as a stock cooler but for so much more of an increase in performance.  Whether this is a downside is really up to the individual to make the call but I still have to list it as something going against the Venti in this market dominated by silence.

Most companies play it safe with budget cooler designs but Evercool didn’t and it shows through brightly with the Venti. If you’re on a budget and working with the limited space of a mid-tower or other similarly small space builds you can do far worse and if noise is not an issue, give the Venti a strong consideration. 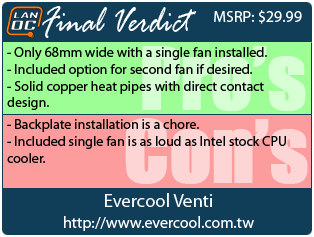 Author: William
Review and Event Staff
William is the newest addition to both the Review and Event staff. Being in charge of power, hopefully you have to see very little of him during our lans. Outside of lans he can be found engaging in his unhealthy obsession with all things gaming in between writing the odd review and bothering Wes at all hours of the day. An avid gamer nearly all his life, it is common for the latest MMO release to cause him to drop off the face of the Earth for a week or two.
Discuss this article
Log in to comment
Posts in discussion: Evercool Venti