All said and done the NH-U14S is the most impressive tower cooler we’ve run through our testing format thus far and manages to have a lower MSRP than some of the other competitors. The easy install is also another feather in its cap. As previously mentioned the addition of the second fan is a matter of personal preference between sound and temperature but the option is always something you like to see in a tower cooler. 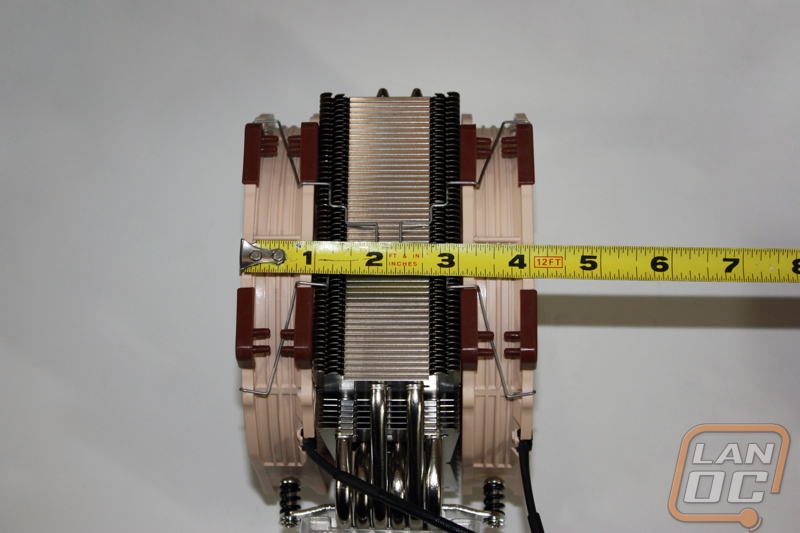 The same possible issue with fan installation after tightening the tower down is present in the NH-U14S but Noctua suggests you install your cooler before securing it to your case to combat this. The whining noise the double fan produces is probably the biggest negative coming out of the U14S but this can also be combated by using the included Low-Noise adapter and the second fan installation kit.

The combination of Noctua’s easy installation process plus top end performance makes the NH-U14S an amazing choice for the first time builder or established enthusiast. With the ability to even outperform some AIO liquid coolers on the market and still allow for board space, you would be hard pressed to find a better tower cooler option in this range with this combination of performance, style, and operating noise levels. 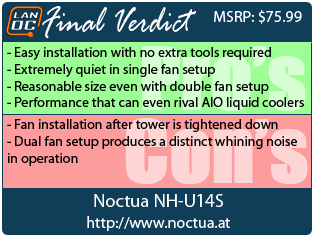 Author: William
Review and Event Staff
William is the newest addition to both the Review and Event staff. Being in charge of power, hopefully you have to see very little of him during our lans. Outside of lans he can be found engaging in his unhealthy obsession with all things gaming in between writing the odd review and bothering Wes at all hours of the day. An avid gamer nearly all his life, it is common for the latest MMO release to cause him to drop off the face of the Earth for a week or two.
Discuss this article
Log in to comment
Posts in discussion: Noctua NH-U14S