Great cooling is essential to PCs now more than ever. Most PCs will rely at least partially on air cooling crucial componets. One of the case fan manufacturers that is rising in popularity is Cougar. Cougar is a company from Germany that seem to have a grasp on what enthusiast crave when look for fans for thier rigs. Constantly increasing is the demand for cooling fans that are quiet, have great airflow, and are visually appealing to the consumer. Today we are taking a look at the Cougar Vortex PWN 120mm case fan to see how it performs in a large market of cooling fans.

Cougar has packaged the Vortex in a way to show off the fan as well as advertise the features to the retail customer. Inside, you'll find the fan shrouded in plastic, along with a 4-pin to molex adapter, rubber mounting pins, and traditional mounting screws. 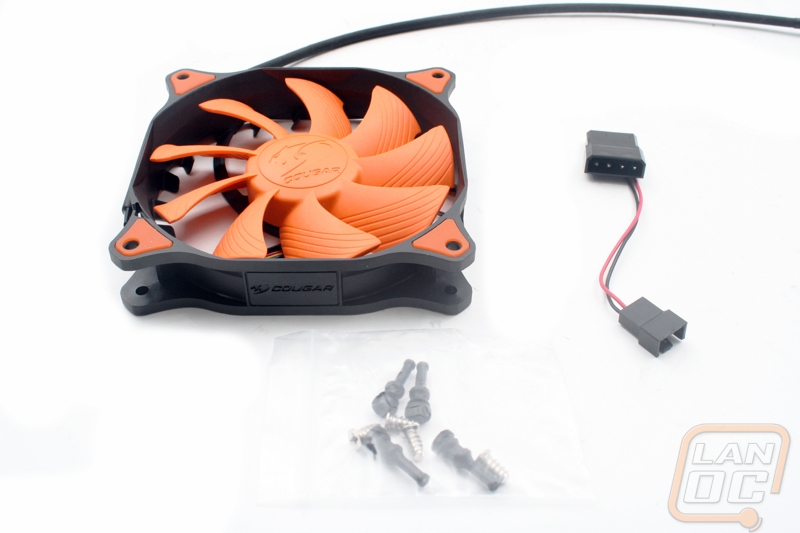 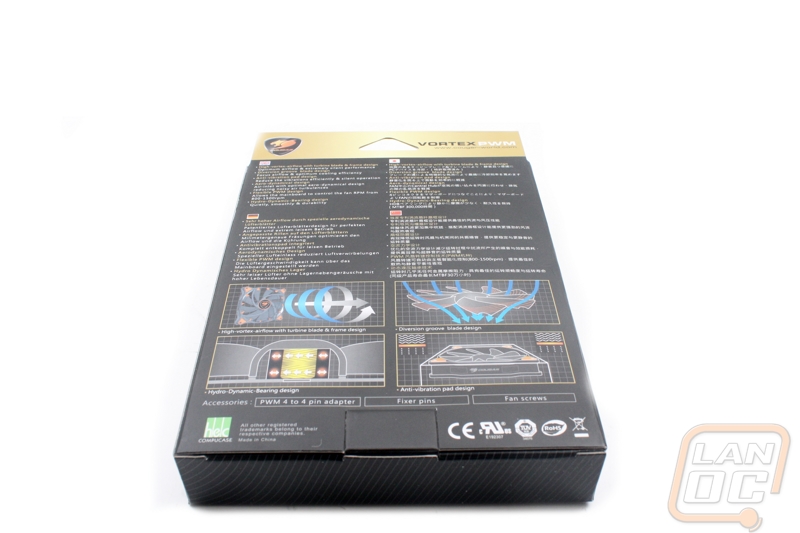 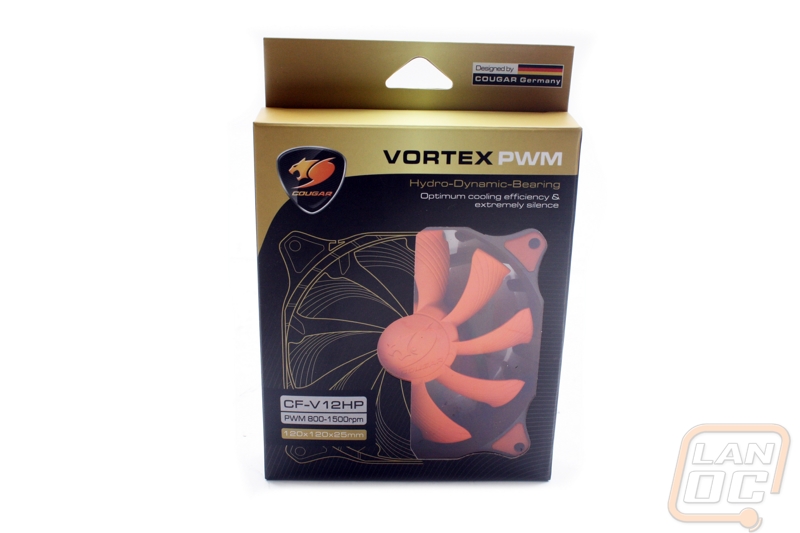 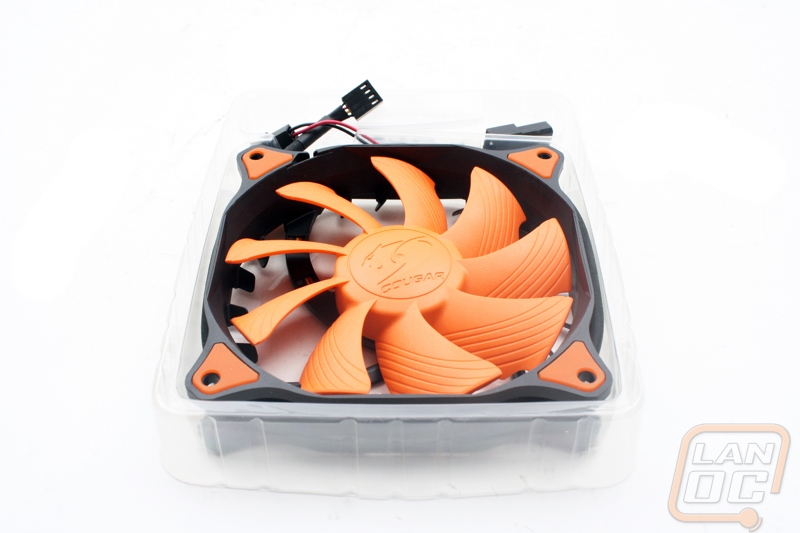 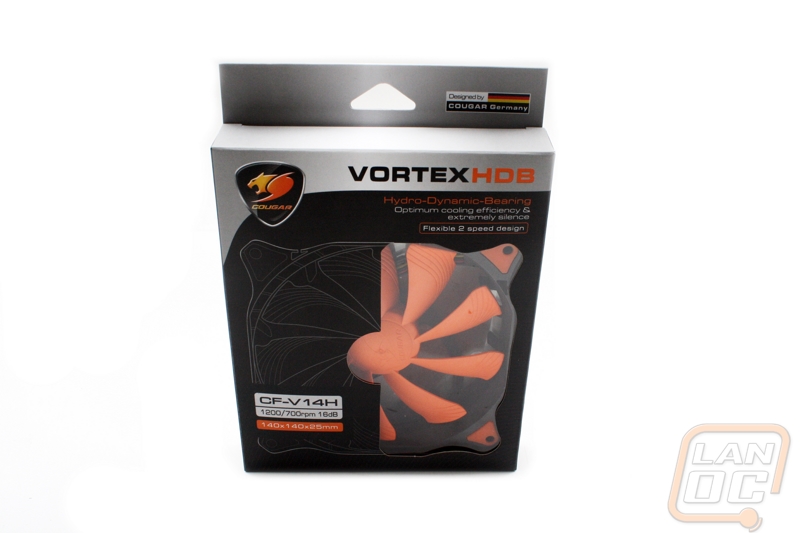 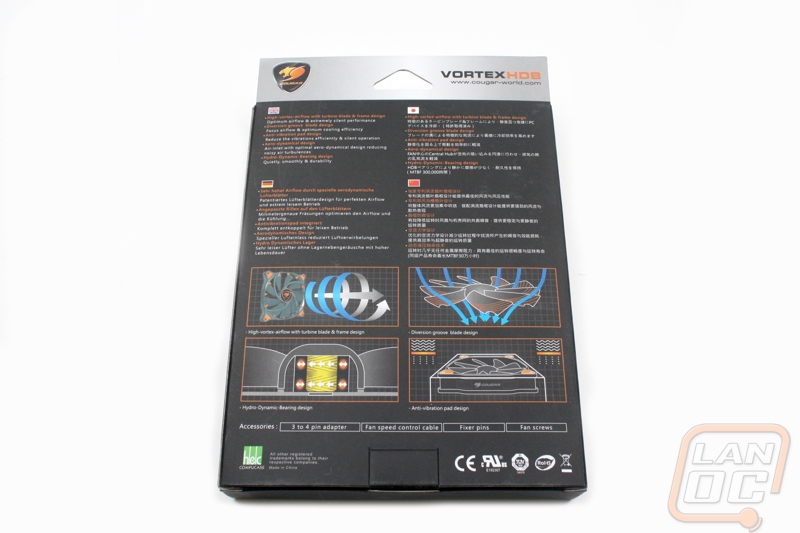 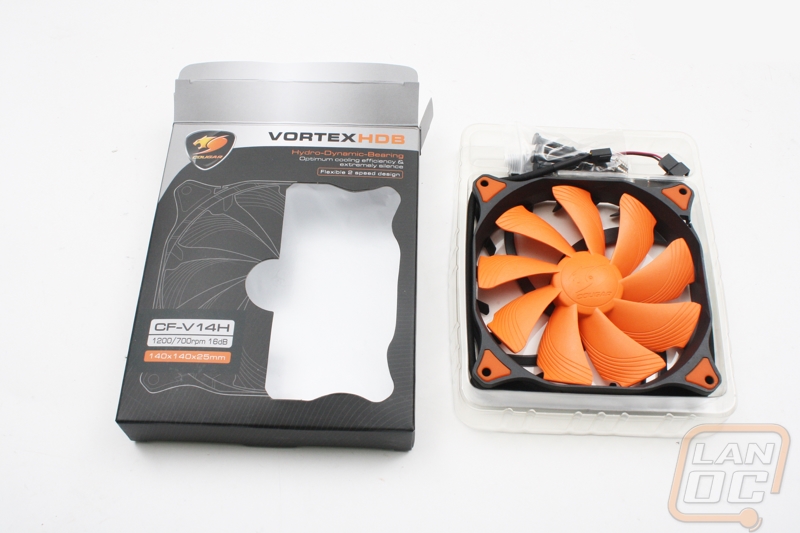 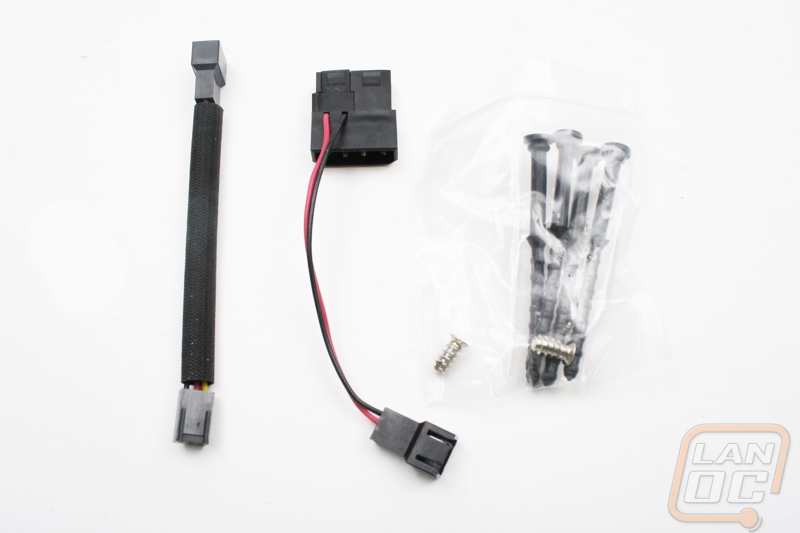 The Vortex is equipped with features at ever corner, literally. Each of the four mounting holes in the corners of the fan are designed to absorb vibration. This is achieved with a combination of anti-vibration padding and rubber pins in leui of the traditional mounting screws. An additional benefit is this system requires no tools to install. Simply pull the pins through to secure the fan to the chassis. 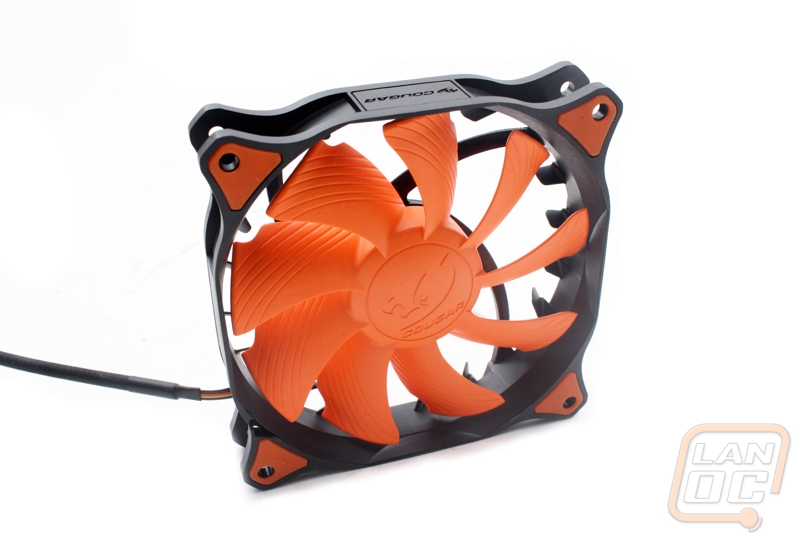 Cougar has also taken care to maximize the air flow the blades of the Vortex generate. Stock fans are known to suffer from flow dispersion, which is essentially the lack of control of the "tunnel" of air created. Looking closely at the blades of the Vortex, you can see grooves that begin at outer-most corner of each fin and sharpy curve together in the opposing corner. This design, Diversion Groove Blade as Cougar refers to it, helps to channel the air into a focused air flow, centralizing air around the radius of the fan. 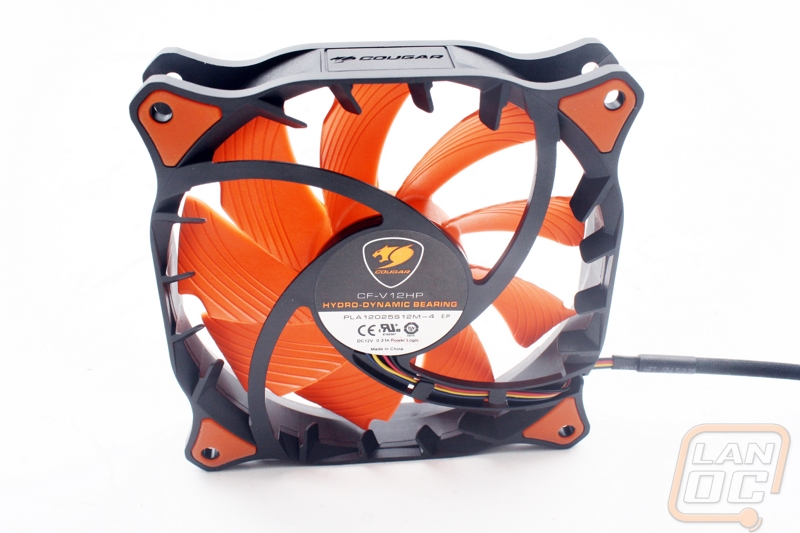 The fins are also designed to reduce air turbulence with a specific shape to provide smooth flow between the blade. In combination with the hydro-dynamic-bearing technology used in the fan motor, the Vortex is outfitted to tackle noise in a significant way, though we'll cover how that translates into real-world use in the Performance section. This HBD technology, according to Cougar, is superior to sleeve and ball bearing designs.

Lastly, the Vortex is of course a PWM fan, allowing control of the fan's speed on a range from 800 to 1500 RPM. 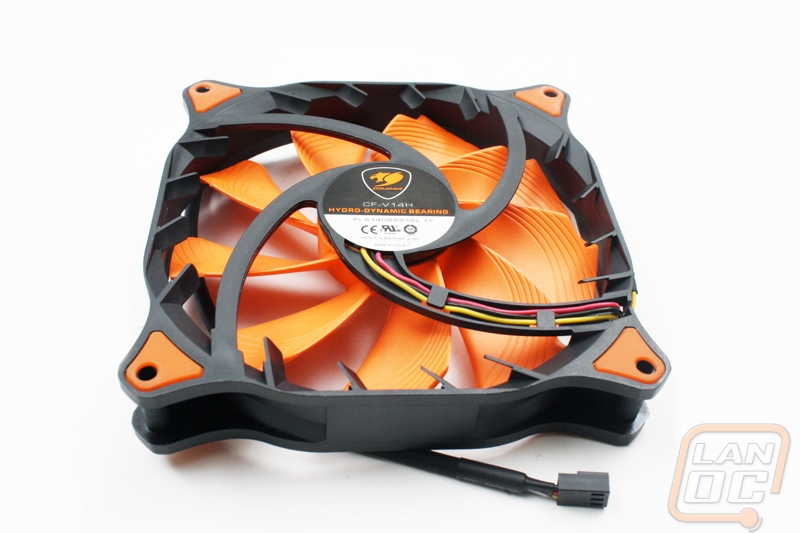 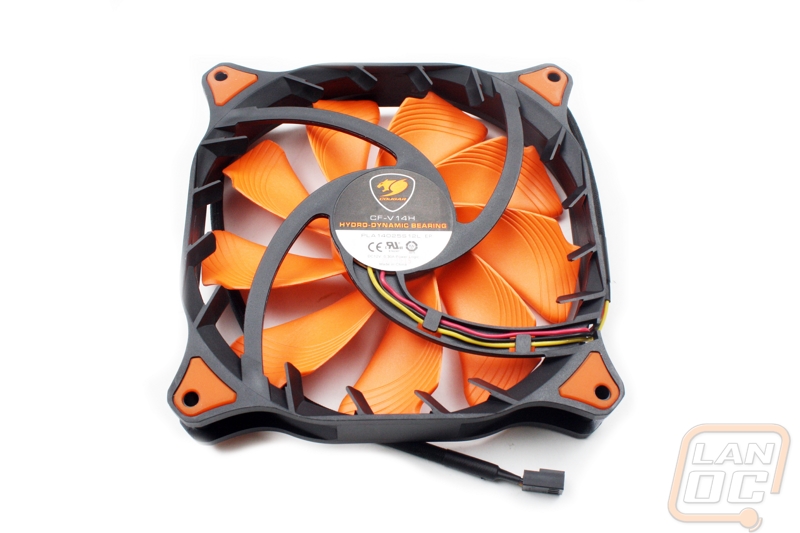 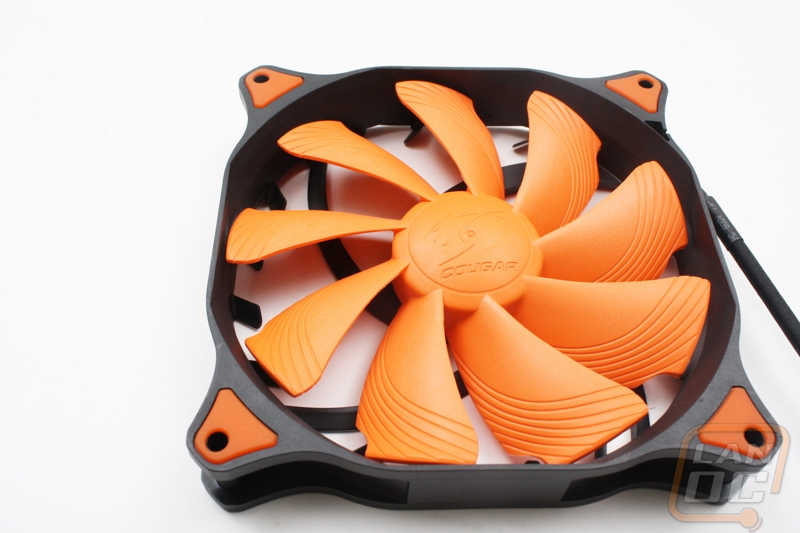 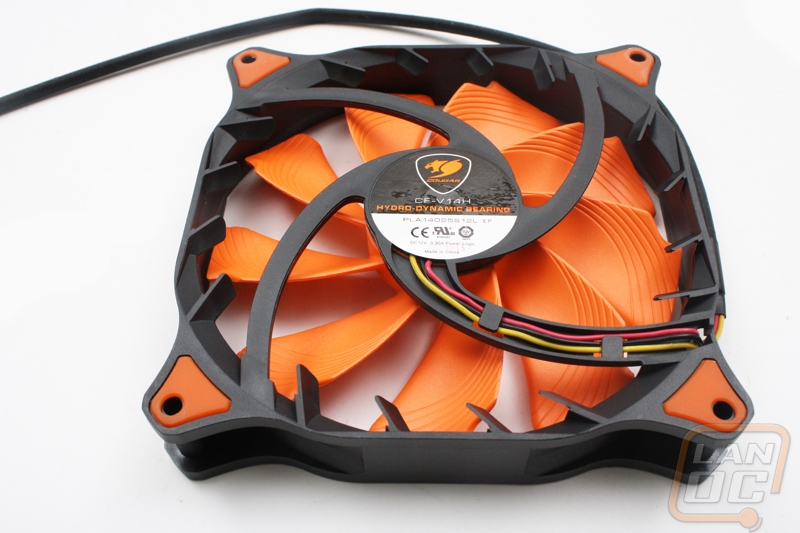 Fans are often considered a necessary evil, despite their obvious benefit the by product is noise and often times dust. That being said, fans can often be a simple way to spruce up the appearance of your build, and the Vortex is indeed a sharp-looking fan. We weren't disappointed in the amount of air it pushed, and the engineering of the fins seemed to pay off with a nice, centralized air source. This makes the Vortex an especially appealing candidate for items like heatsinks or water cooling, but unfortunately those sort of applications don't play well with the rubber pin approach. You're more than likely going to have to use the traditional fan screws to mount the Vortex in most cases other than a chassis solution, which severely affects the anti-vibration design of the mounting points. True, you still have the pads, but these are somewhat shallow; the threading of the screws still make contact with plastic inside.

Additionally, though the hydro-dynamic-bearing technology provides a great 300,000 hour estimated life, it didn't help reduce noise as much as we'd hope. The 120mm fan is rated at 17.9dB, it was louder than we expected considering its design especially when compared to fans like the Noctua's tested in the LanOC office. Take that lightly, however: the Vortex is still a quiet, efficient cooling solution, we just think that the Db rating given to it is a little low. 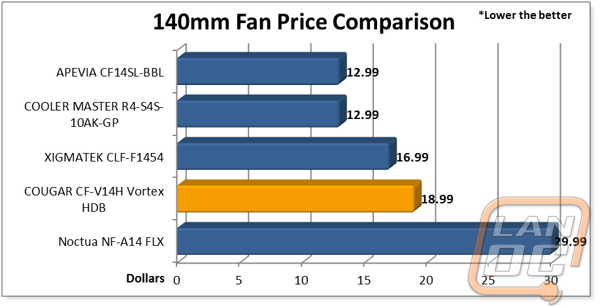 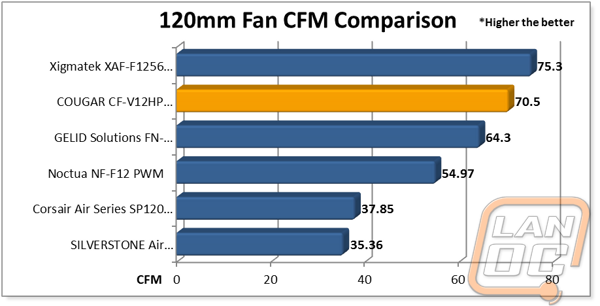 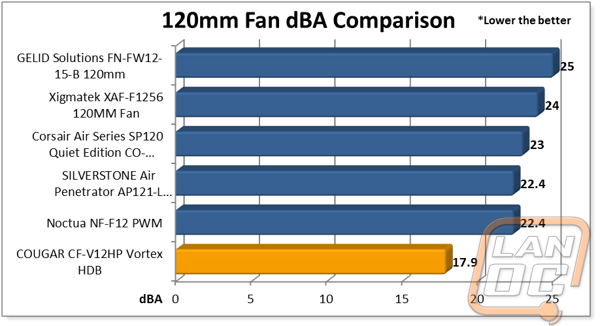 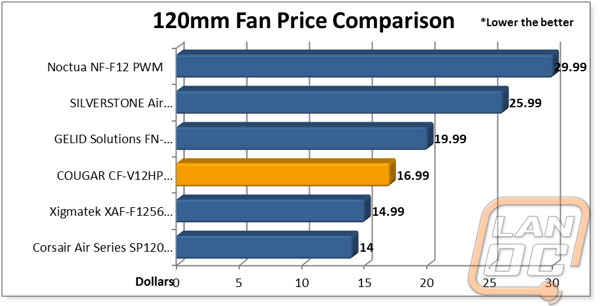 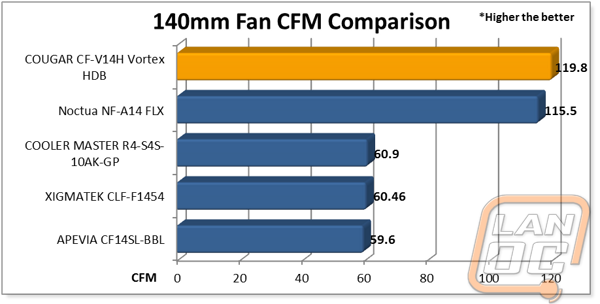 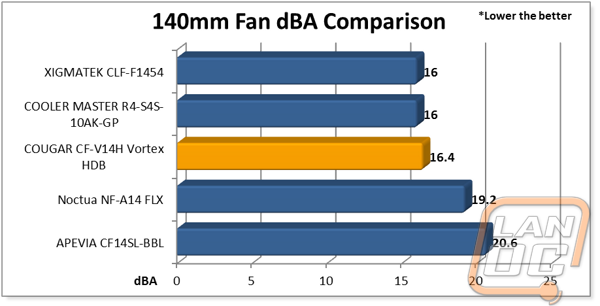 The cable is also sleeved black, which is great in any build to help blend in, and maintains the orange-and-black color scheme that identifies the Vortex in such a unqiue way. 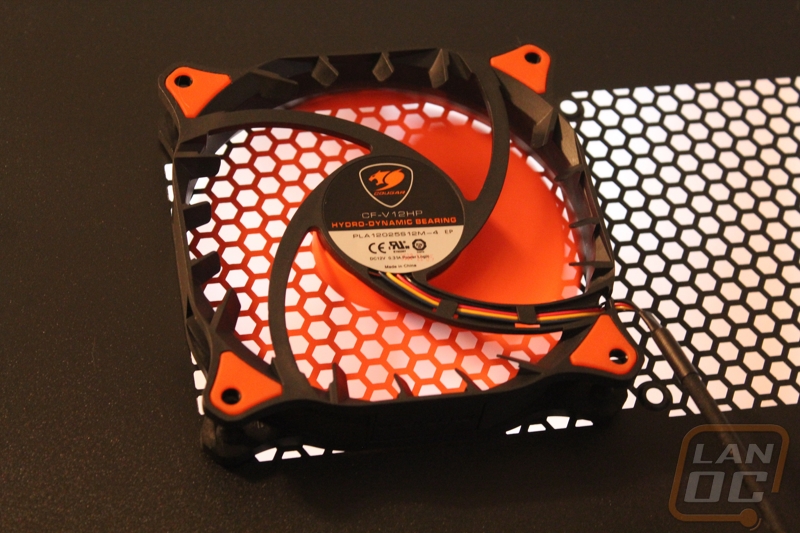 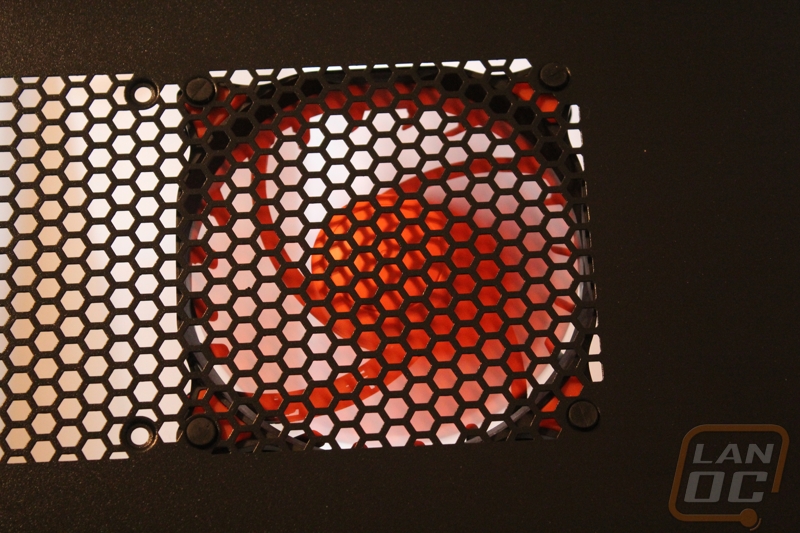 Reading about all the features the Vortex fans are equipped with, I was anticipating a hefty price tag. We pay a premium for quality, and Cougar has designed these fans with some great intentions. Though it MSRPs for 16.99, you can find the Vortex priced at under fifteen, which is extremely competitive in this fan exists in, similar designs from competitors nearing the thirty dollar mark. The Vortex isn't quite as silent in practice as we had hoped, but it is still a great result considering the amount of air this fan moves and how efficient it does so. They are on a short list of high quality fans that we would recommend for your next build. 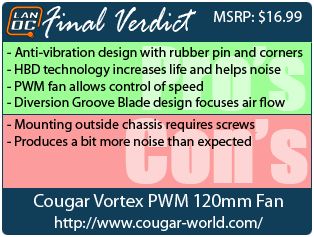 We have 825 guests and one member online