When Sandy Bridge E launched we went from everyone running the fairly cool Sandy Bridge processors to people actually having to worry a little more about what they select. This was made even more important because Intel didn’t include a stock cooler this time around, opting to sell their own water cooling kit for those looking to cool their 3960X’s. Soon after Cooler Master approached me about putting their Hyper 612 PWM, a heatsink that runs half the price of the Intel water cooling, up against the Intel Water Cooling. You want me to put your cooler up against something twice its price? SURE!  Let’s dig in and take a look at the Hyper 612 PWM and its performance. 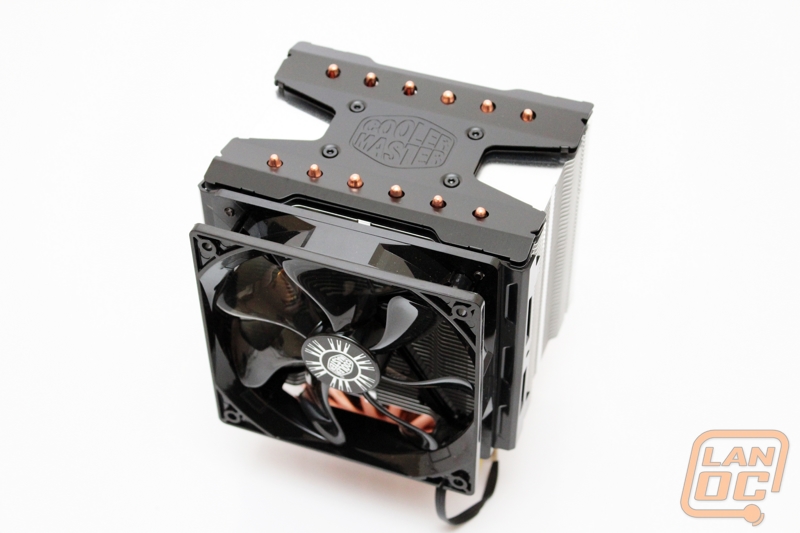 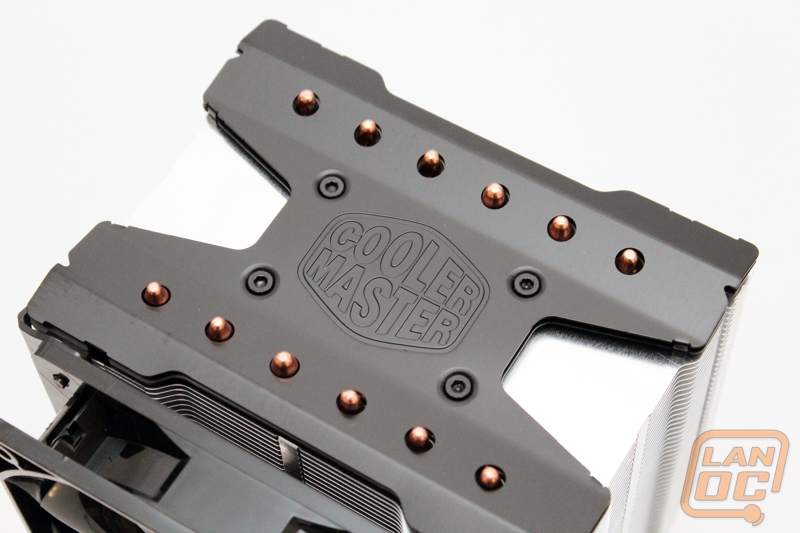 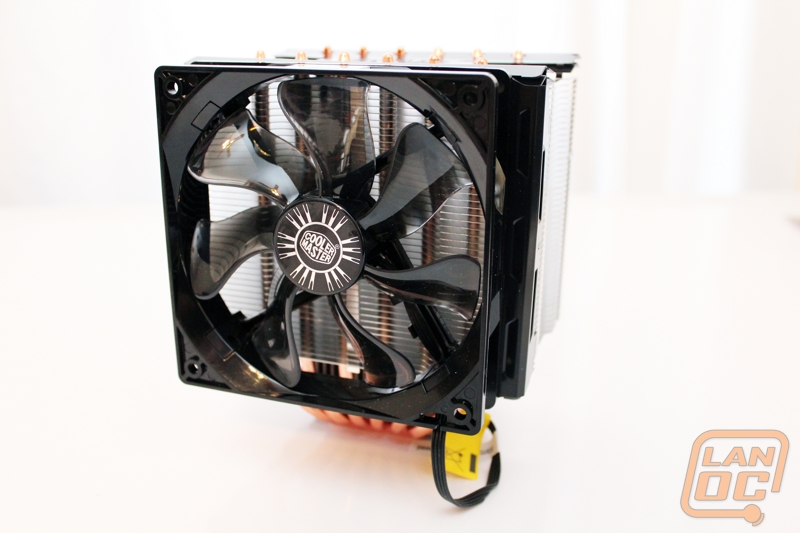 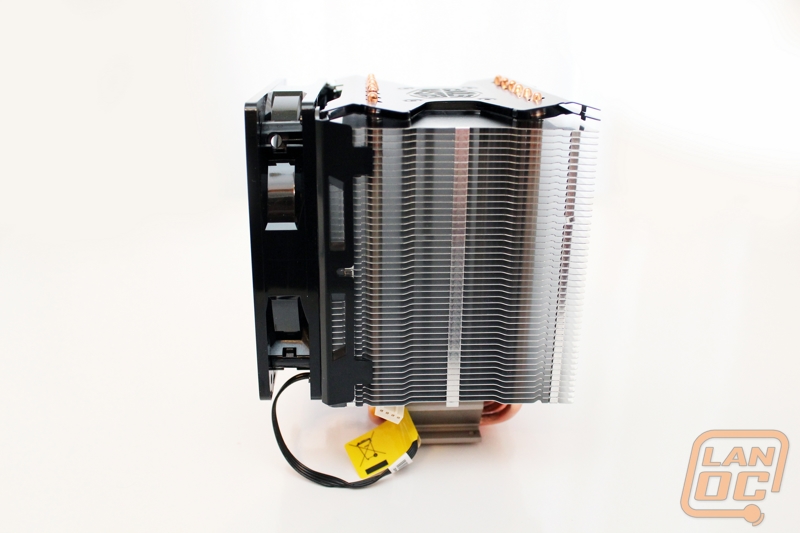 The Hyper 612 PWM came boxed up in typical Cooler Master style, meaning purple and white packaging. On the front there is a large picture of the heatsink, somehow the picture doesn't sum up how big the heatsink really is. On the top and front they have listed all of the different sockets that the heatsink will fit. With that list having 9 different sockets on it, you don't have to worry about compatibility issues with anything made it the last 5 to 6 years and anything in the near future. Inside you have two different instruction manuals, the second being specifically for the new LGA socket 2011. All of the accessories are inside and bagged up. 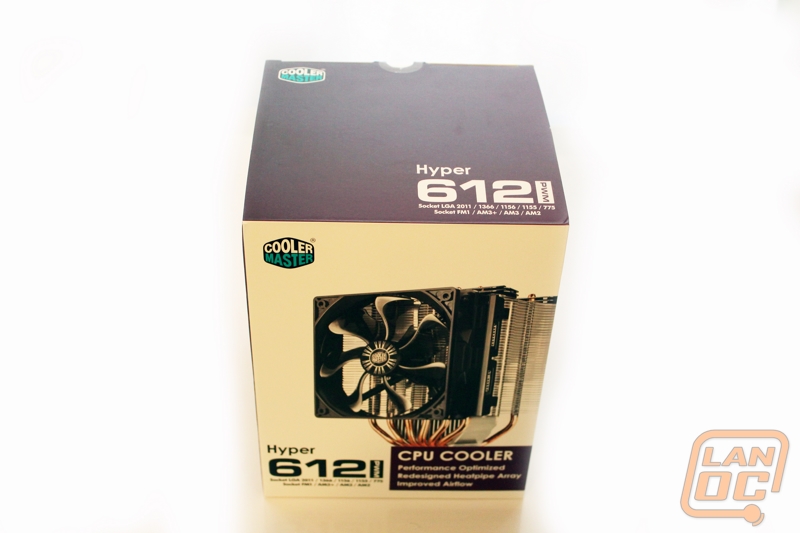 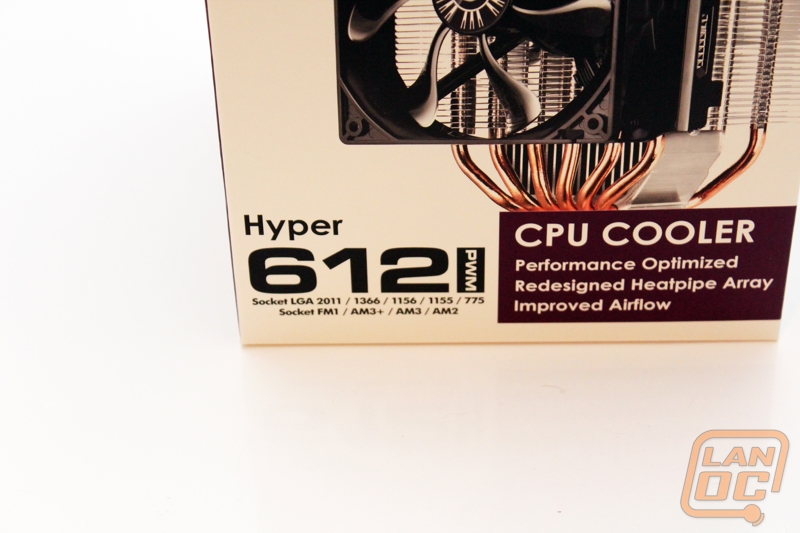 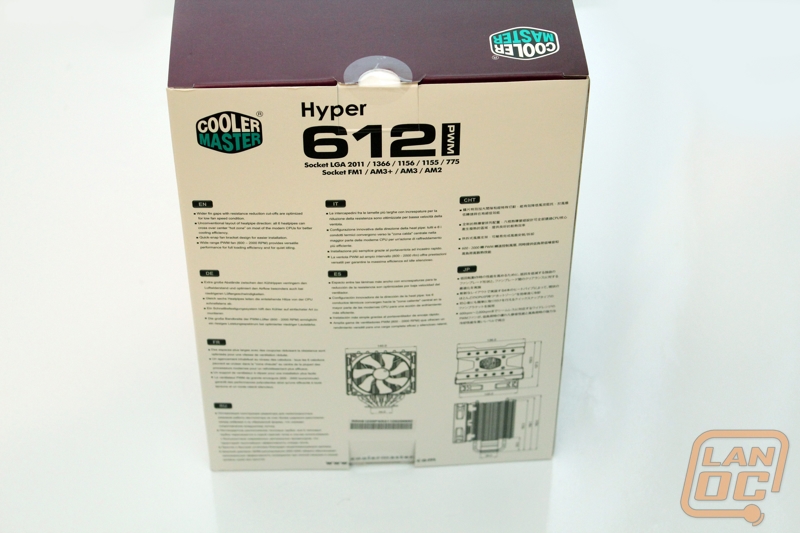 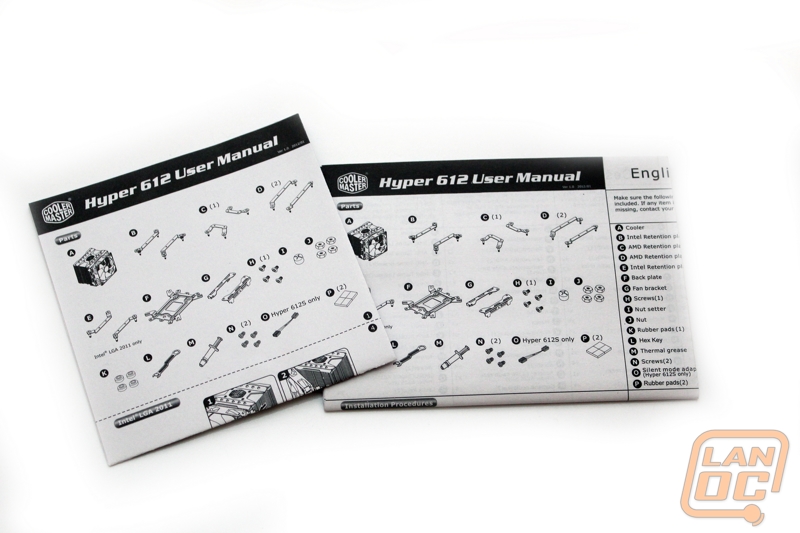 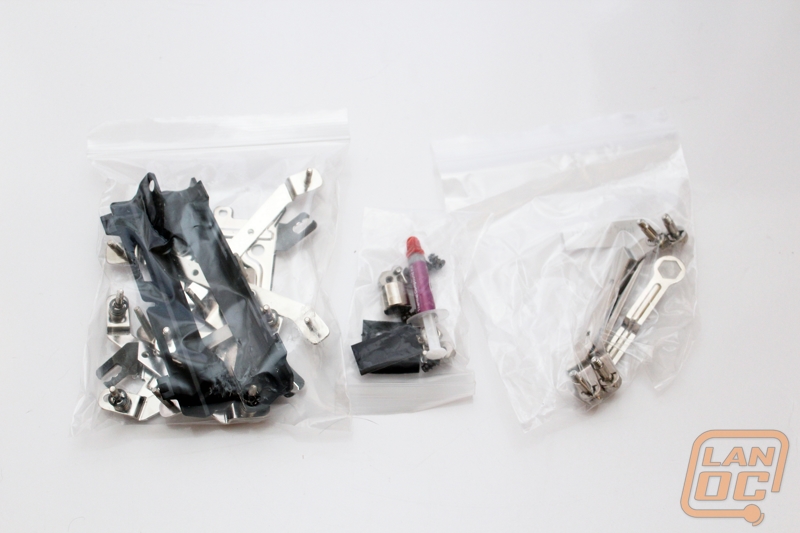 After seeing the size of the Hyper 612 I was a little worried about how easy it would be to install. I love the new socket mounting that 2011 brought with it, but when you are looking at installing a large heatsink like the 612, to say that you have little room might actually be an understatement. Installing the two 2011 brackets on the heatsink itself was very easy, only taking just a minute and four screws. Mounting it to the board required that we have the board out of the PC all together and even then it was very tight. You have to use the wrench that Cooler Master provides to reach and tighten the four bolts. Small access holes in the heatsink with a screwdriver head on the bolts would have made a world of difference in this case. 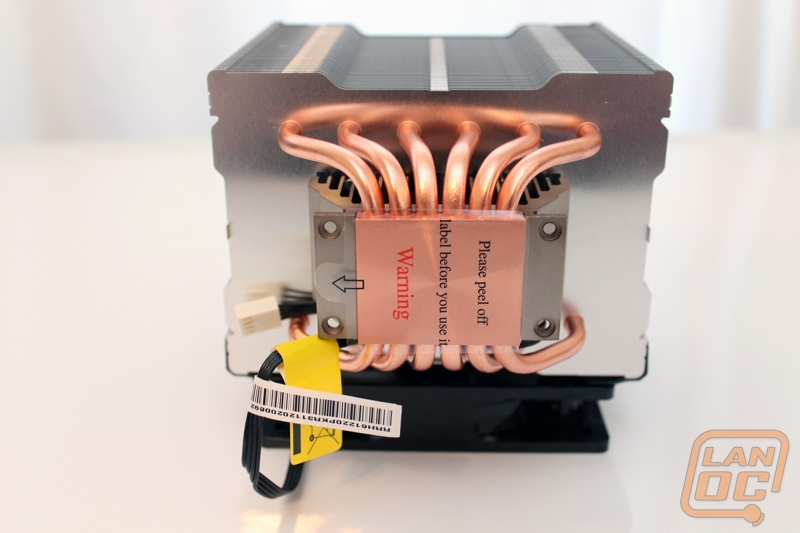 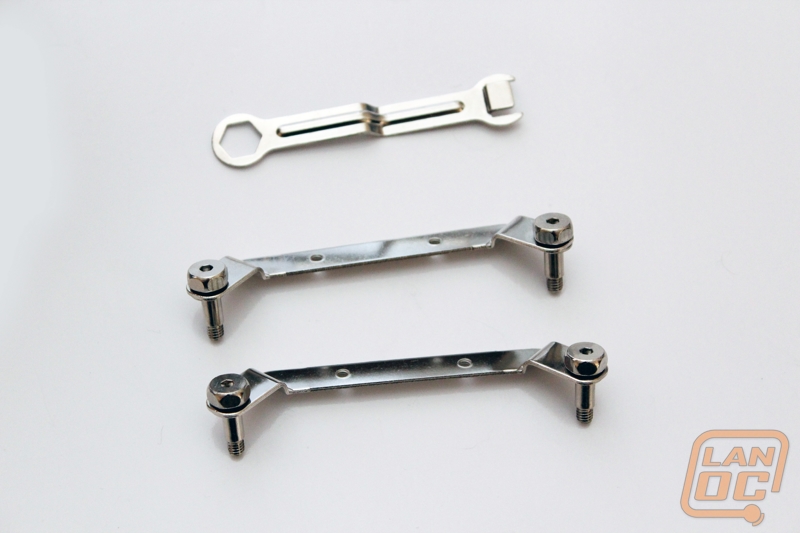 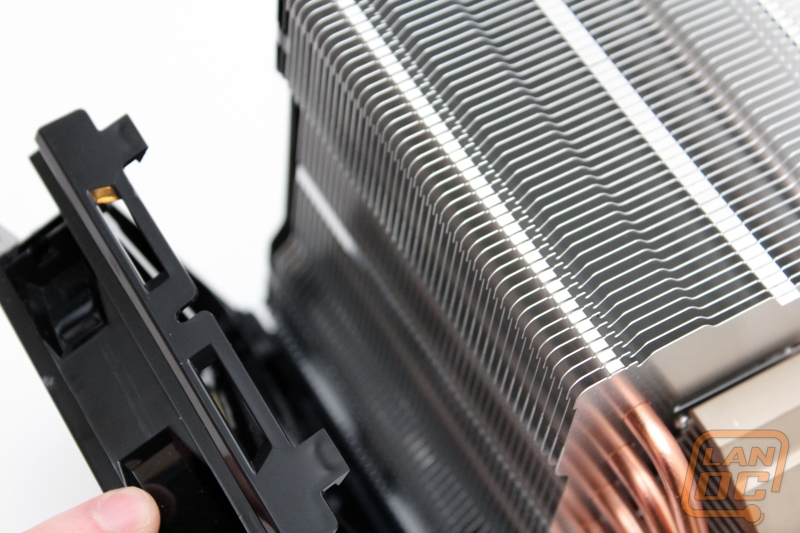 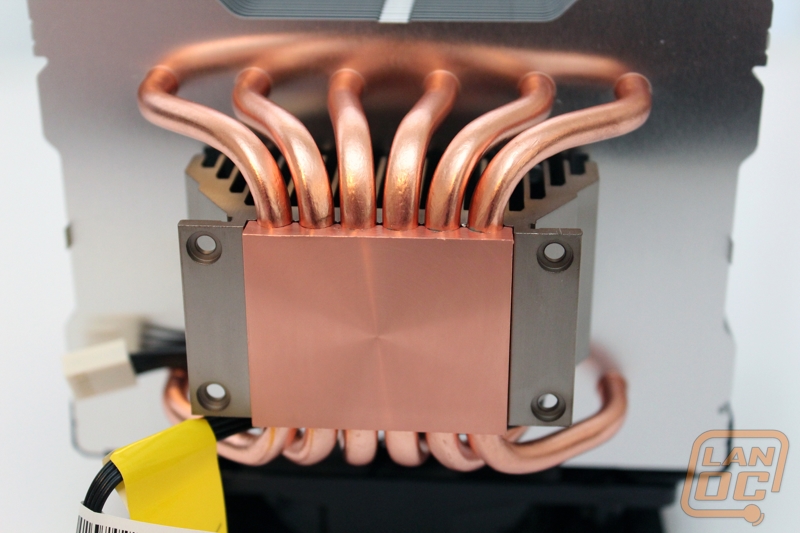 So how did it perform? Let’s start with noise performance. With them both with one fan and each being high quality, noise from the fan’s is limited to air noise when they are running at 100%, something that rarely happens. With both being PWM fans, fan speed is controlled to keep them spinning at no more than what is needed to keep your CPU cool. For the Hyper 612 that is all of the noise you can have, the Intel water cooling on the other hand does also have a little pump/water noise, especially at startup. 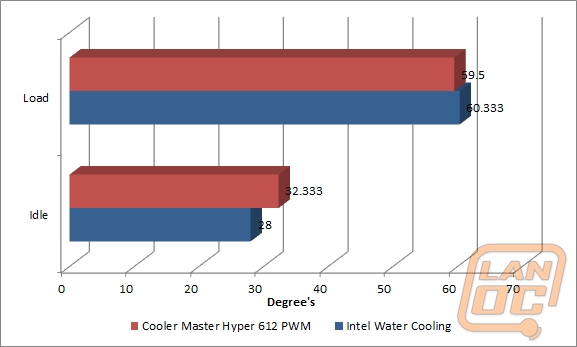 For actual performance we put each under load using prime95 set to its blend test while monitors temperatures using realtemp. Load tests were done over a 30 minute benchmark and then we let each idle for an hour after for idle temperatures. Load temps are all that really matter but it’s still nice to know what to expect for idle also. The difference between the two in performance was only slight when averaged over all six cores on our test bench. Cooler Master’s Hyper 612 PWM beat the Intel water cooling by just under a half degree. The fact that it performed on par with the water cooling itself is impressive, a half degree might not be much but it is enough to put the Hyper 612 PWM out ahead. 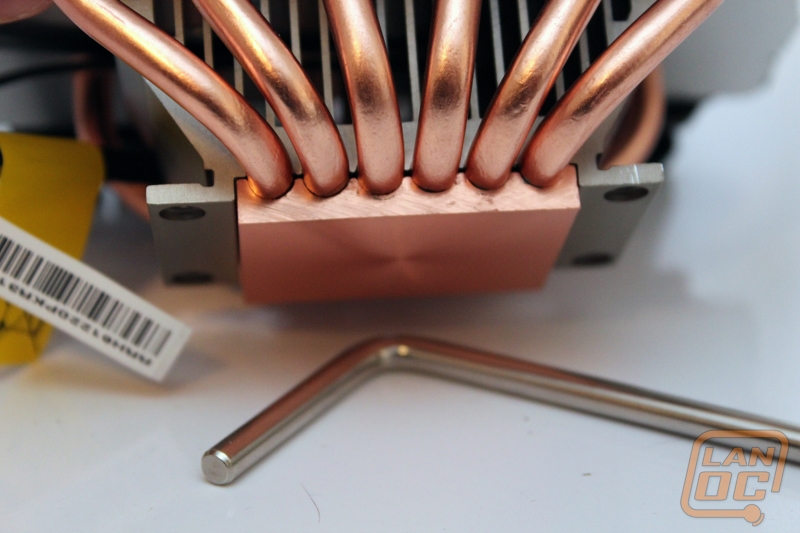 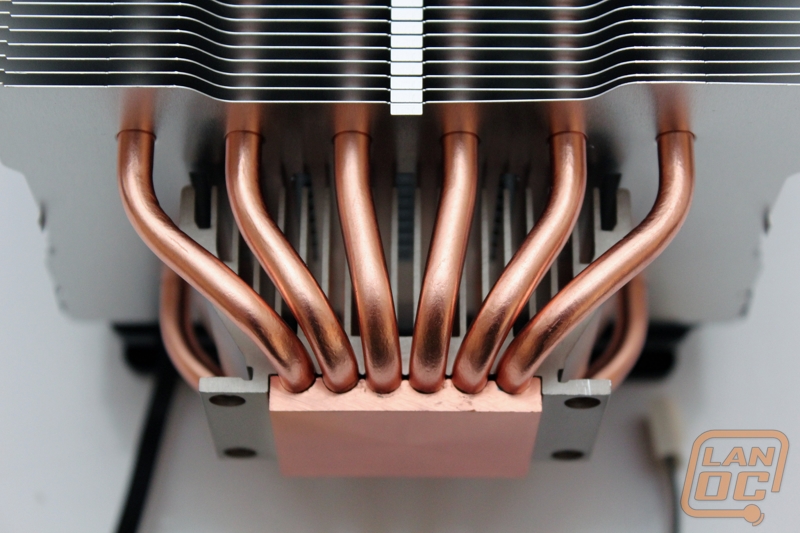 After spending time with both and having a chance to compare the two what do we think? Installing the Intel water cooling, as much as I hate it, is still better than trying to install the Hyper 612 PWM. Its size makes it nearly impossible to get to the mounting brackets without having the motherboard out of the case, even then it’s still not fun. But when you have everything installed our experience with the Hyper 612 PWM was favorable. Noise was less than the water cooling slightly and we saw that half degree in cooling performance. It really comes down to do you want air cooling or water cooling; also price is a major consideration. Where the Hyper 612 PWM really shines is its price, its priced at around half of what you can get the Intel water cooling for making it a great option for someone who wants to keep their 2011 socket CPU cool while leaving a little room in the budget for other important components. 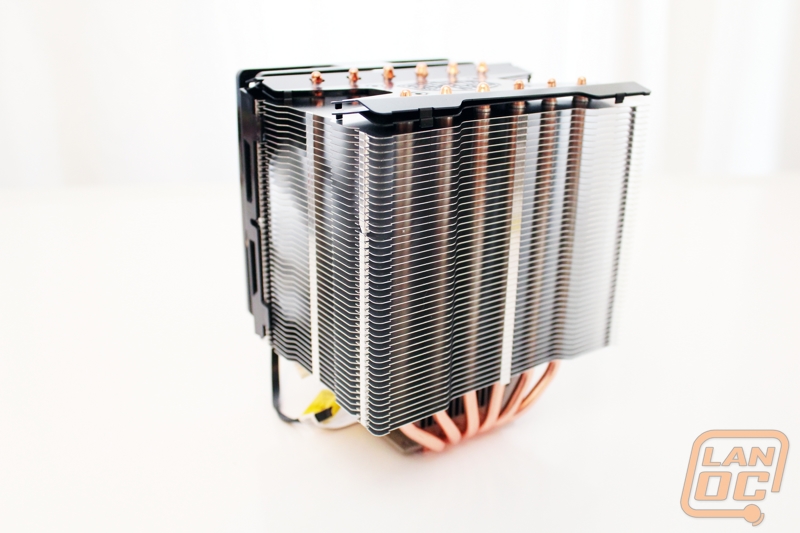 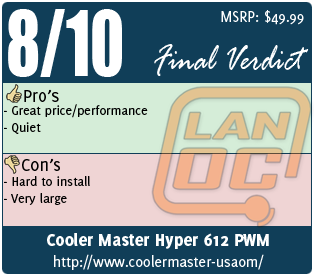 You might call him obsessed or just a hardcore geek. Wes's obsession with gaming hardware and gadgets isn't anything new, he could be found taking things apart even as a child. When not poking around in PC's he can be found playing League of Legends, Awesomenauts, or Civilization 5 or watching a wide variety of TV shows and Movies. A car guy at heart, the same things that draw him into tweaking cars apply when building good looking fast computers. If you are interested in writing for Wes here at LanOC you can reach out to him directly using our contact form.
Discuss this article
Log in to comment
Posts in discussion: Cooler Master Hyper 612 PWM

Twodavez replied the topic: #24704 19 Apr 2012 23:35
So i have a question, does dust and long term performance factor into the review at all? i have a very similiar CM heatsink, and it's very hard to get all the dust out of the fins, and requires taking off the fan and cleaning behind it, where most of the dust appears. While i'm not sure how else they could fix this, i'm sure with the radiator being more accessable, it might be easier to clean with the water cooling unit. Couldn't you just take it apart and wash it with water? That's much harder to do with a attached Heatsink as additional care would need to be taken for the contact point...

Something i never really see in reviews is the "dust" factor. I find this almost as important as the performance, as if it's filled with dust, it's not going to do what it's supposed to...

garfi3ld replied the topic: #24705 19 Apr 2012 23:42
They all fill with dust though. Cleaning the dust out of water cooling is about the same as the heatsink with compressed air. You would have to remove the fan on ether. Washing with water would actually be easier with air cooling simply because it doesn't have the pump and the wiring for the pump, you wouldn't want to corrode the connection.

There isn't any way to benchmark a dirty performance. I think its expected that you clean the heatsink out to keep top performance. Similar to maintenance on your car.

THUMPer replied the topic: #24711 20 Apr 2012 17:45
If I can't get the heatsink clean with air, either it be Canned air or an air compressor I take it off and wash it in warm water.
If you are proactive and clean your sinks on a weekly basis depending on how dusty your house it and how often your PC is on, it shouldn't have too many issues.

Twodavez replied the topic: #24715 20 Apr 2012 20:39
So you really take off your heatsink every week, cleak off the processor contact point, wash it/blow it out, then replace the thermal paste and put it back on?

I know i'm complaining here, but there has got to be a better way of managing dust... Wish they could make screens to put over all your fans. Most cases that i've seen don't have this problem addressed, and maybe it's about time we start talking about it. High air flow just means more dust!

I've heard it's good to use a used dryer sheet to wipe off your monitor beause it transfers a little of the static and repells dust, i must say i do this and it works pretty well. But i'm not sure how it would interact with the PC's power surging through it.

Maybe this requires it's own thread, but i'd like to hear about how people maintenance their PC's especially in relation to the dust issue...

garfi3ld replied the topic: #24716 20 Apr 2012 22:05
I never have to clean my fans, radiators, or heatsinks. Higher end cases all come with filters on the fans to prevent the dust from getting into your case. Of course there will still be some, but a quick clean out once a year handles that for me. Normally this happens when I am swapping something out

THUMPer wrote: If I can't get the heatsink clean with air, either it be Canned air or an air compressor I take it off and wash it in warm water.
If you are proactive and clean your sinks on a weekly basis depending on how dusty your house it and how often your PC is on, it shouldn't have too many issues.

Exactly. Cleaning doesn't necessarily mean removing the heat sink, some compressed air now and then will be enough to survive you between the removal and cleaning ritual. Some fresh thermal compound is never a bad thing either. It's not anything unique to CM of course.

As far as a dust factor in reviews, I can't even begin to think of where you would start with that. There are so many factors to consider. And like Wes said, every heatsink is going to get dusty. Trying to rate a cooler on 'dustiness' would be like rating a meal on how dirty it leaves the plate.

We have 944 guests and one member online