When I was told that I was doing a review of a heatsink from a company called Zaward, I asked around to see if I was the only one who had never heard of them. Since I wasn't the only one, I was glad to be the first to see what the guys from Taiwan had to offer. 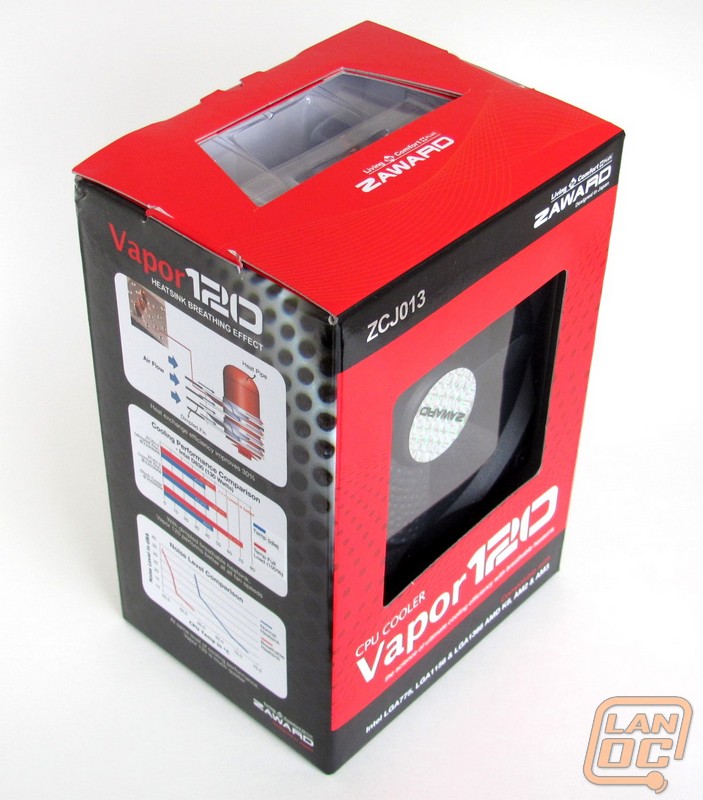 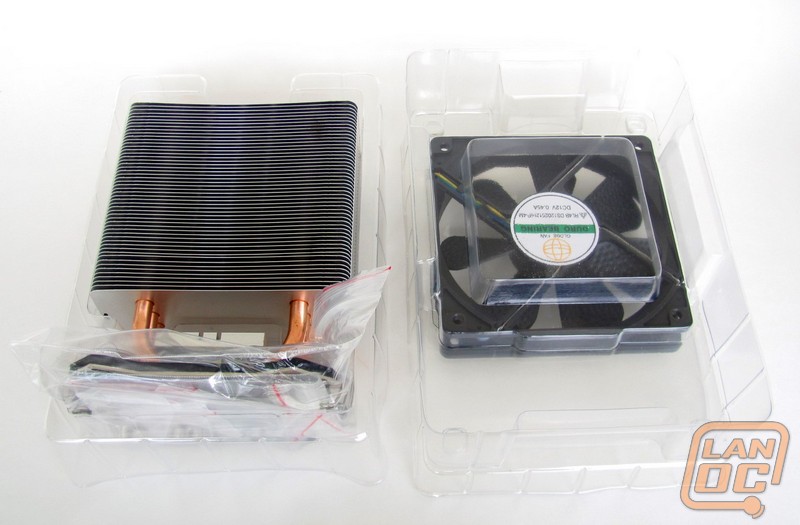 Here's all the accessories that are included in the box, everything you'd need to install onto just about every modern socket type. 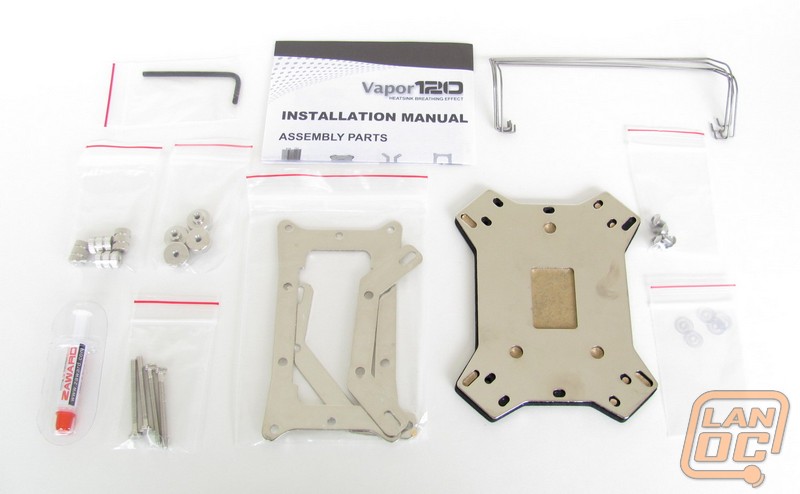 Since the FedEx guy delivered the Titan Fenrir Evo and the Vapor 120 at the same time, my first impression was that there was no way this is going to be able to touch the Fenrir. For the most part, it looks like your average "Plain Jane" tower heatsink. It's nowhere near as big and has one less heat pipe. But it has one thing the other doesn't, the ability to strap on a second fan. Will this help it overcome what seems to a insurmountable odds? 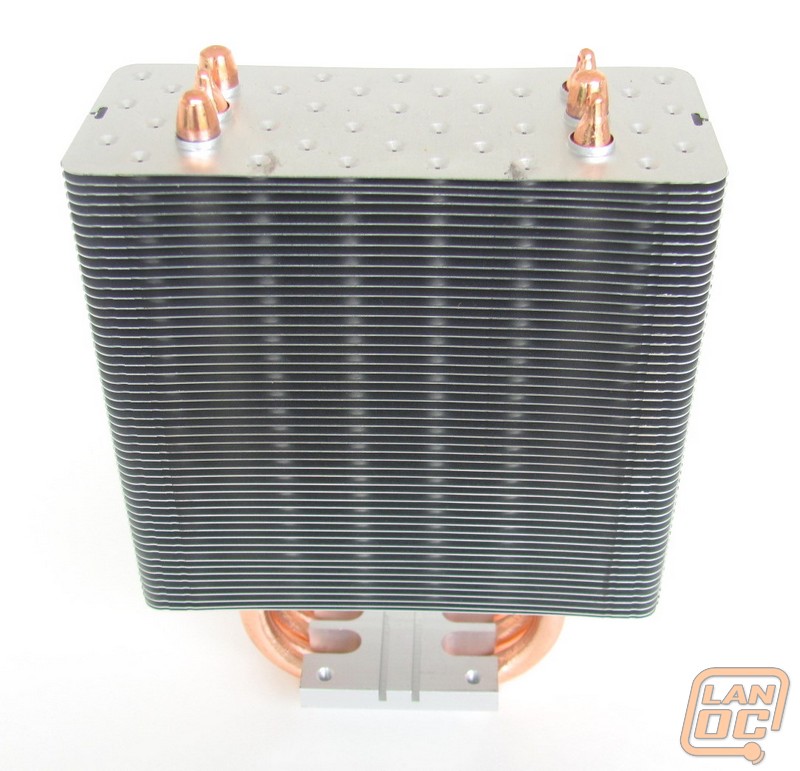 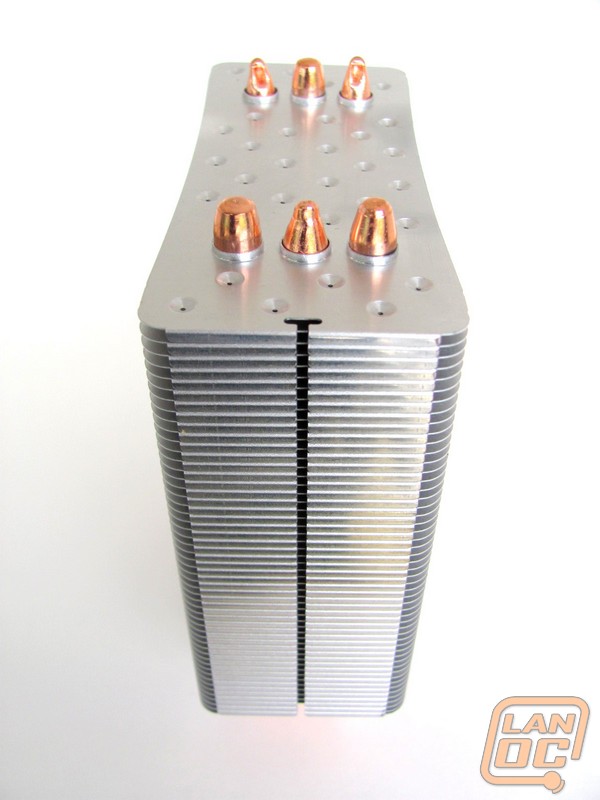 The Vapor 120 comes with a, you guessed it, 120mm fan. The cool part about it is that it is covered with dimples like you'd see on a golf ball. Having seen the episode of Mythbusters where they put dimples on a car and got better gas mileage, I understand that concept. What the box claims is, that fan noise is reduced by %15 with them there. I can imagine that it makes it harder to wipe the dust off the blades though, something I do every few months. 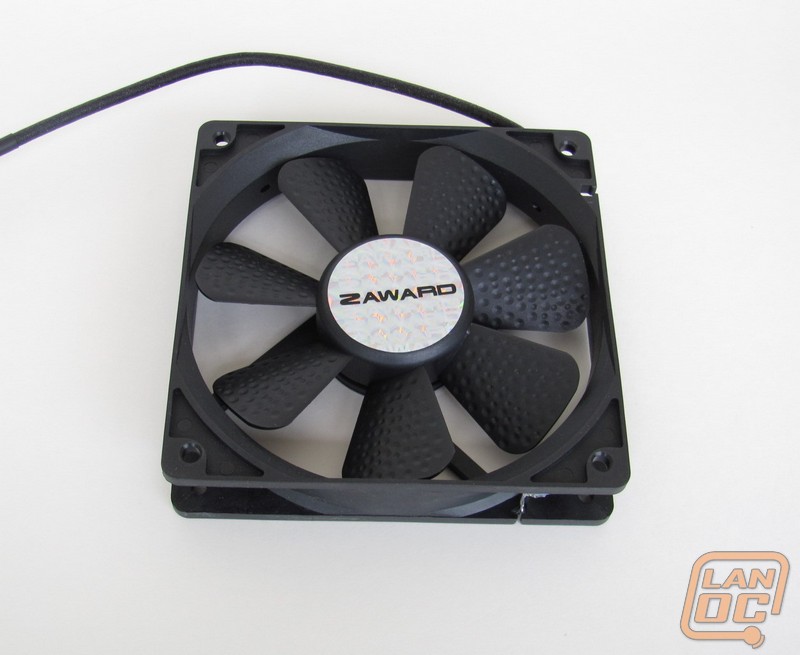 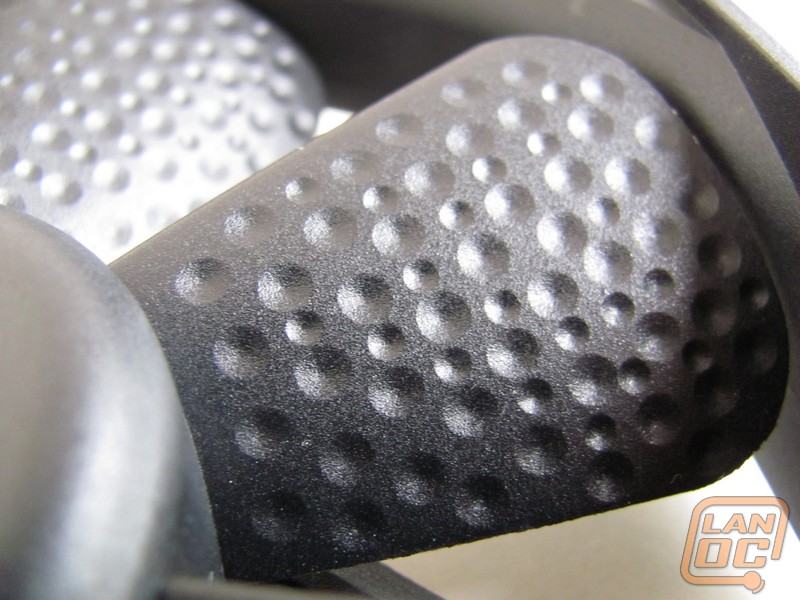 Not to let the fan be the star of the show, they've included dimples on the heatsink fins as well. Only this time, every dimple has a hole in it. According to the side of the box, heat exchange efficiency increases 30% when these are added. Then they have a drawing of the path the air would take when it comes across the dimple. It would be interesting to test that claim with an identical one that doesn't have the dimples. As with most marketing hype, you're never sure if isn't just that, hype. I guess we'll have to take their word for it. It gives it a unique look, at least. 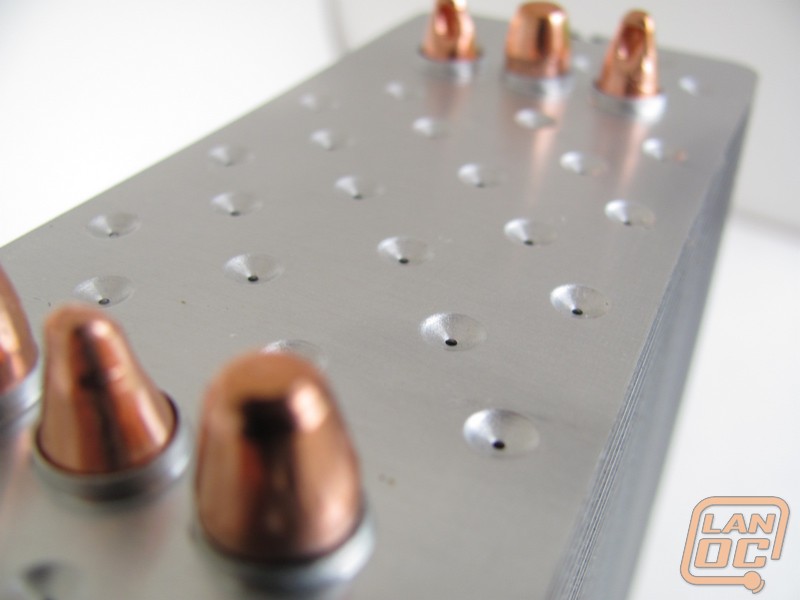 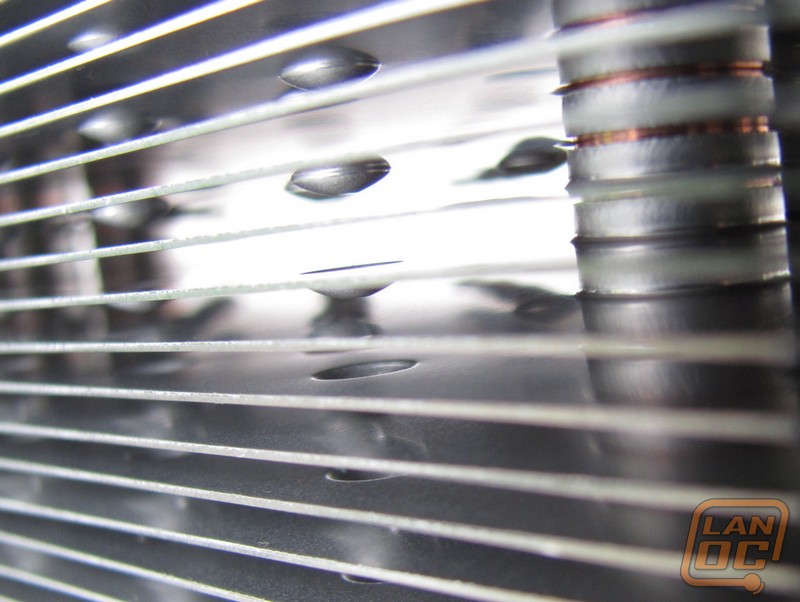 Here's a close-up of the base. You can see that there are still marks from the milling process. While not the worst I've seen, you certainly aren't getting a mirror finish either. Every little groove is a bit that isn't making contact with the CPU. Even more of a reason to use a good heatsink compound. 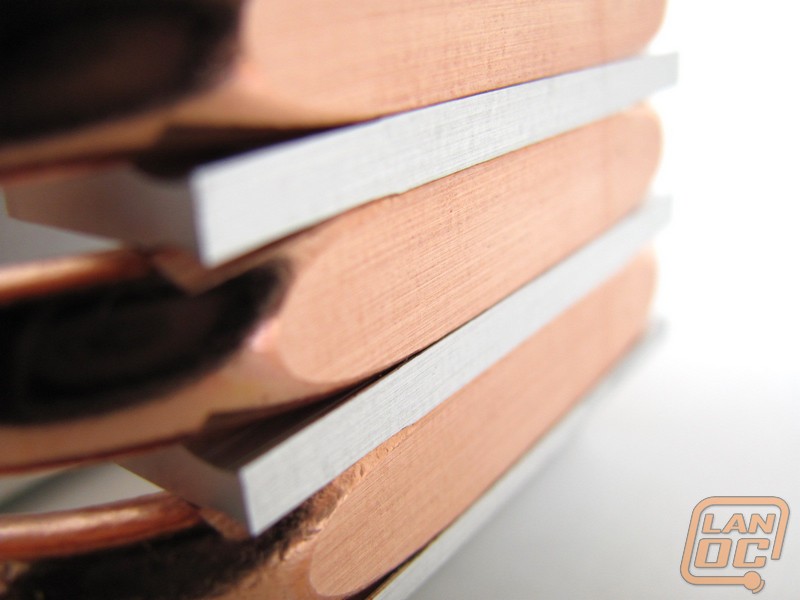 For the review, they sent along a second fan to show off the dual-fan capabilities of the heatsink. While the included fan has 4 blue LEDs on it, the second one does not. Other than that and the sticker on it, they look identical, and both have dimples. 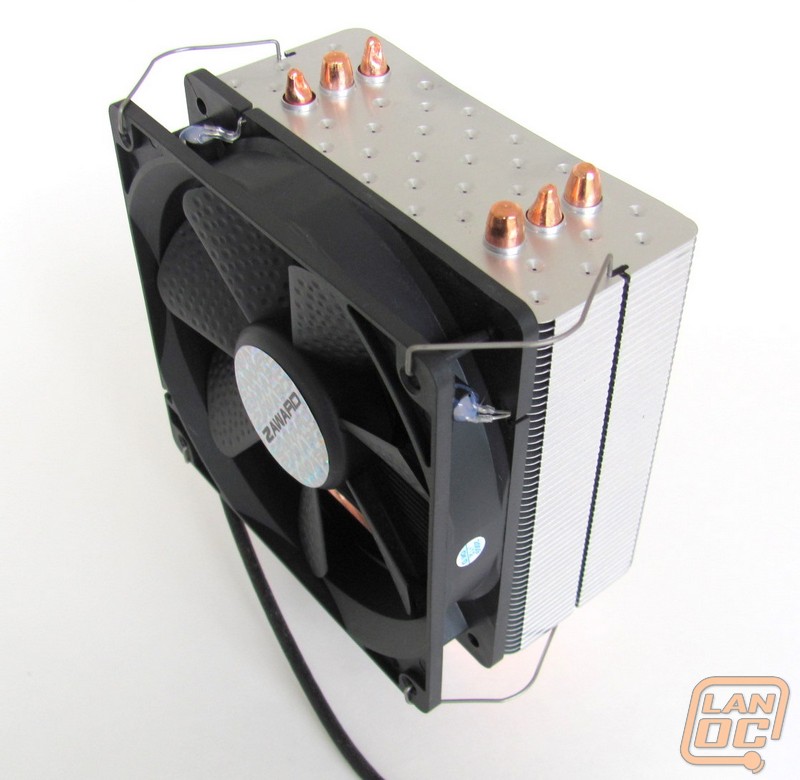 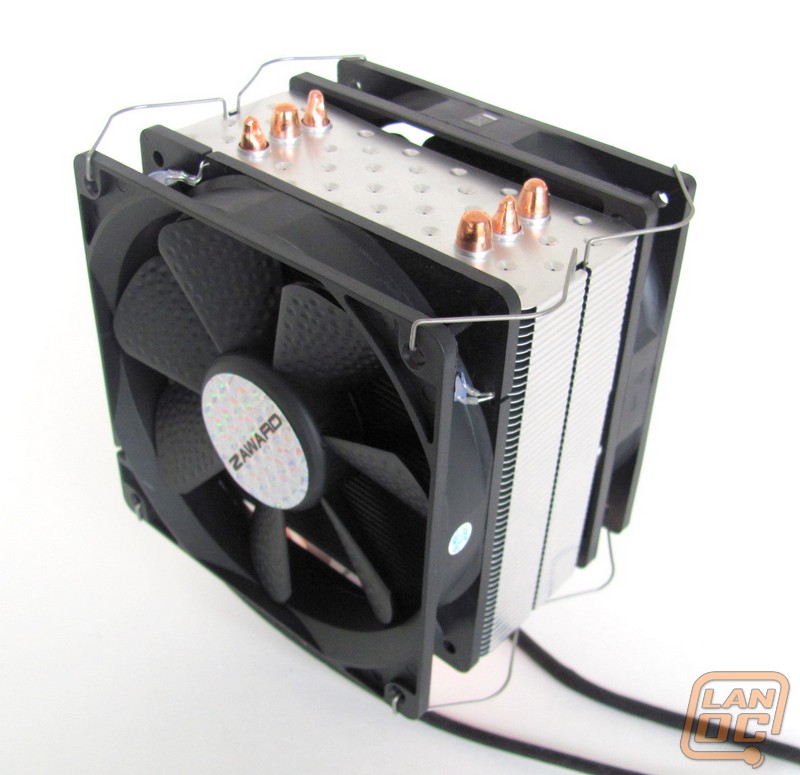 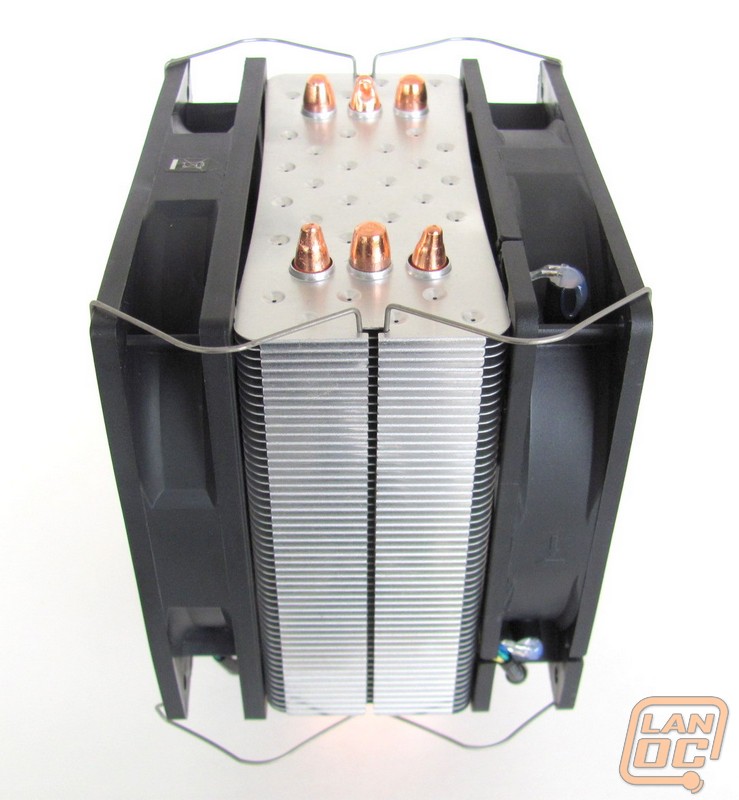 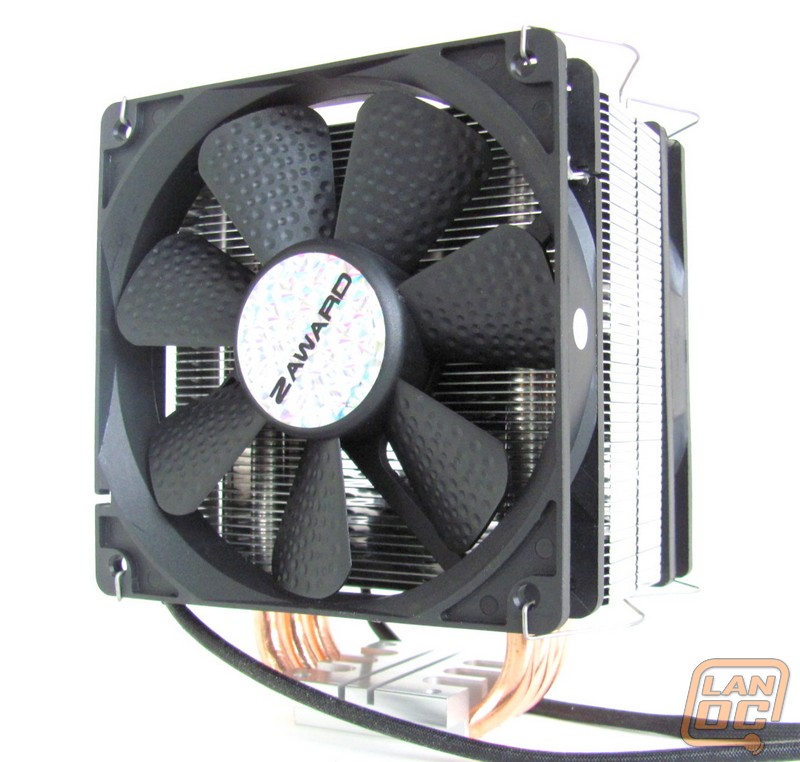 Thankfully, installing the Vapor 120 was, for the most part, uneventful. I attribute this to the fact that it's not overly thick, which makes it easy to get your hand next to the motherboard to tighten the mounting screws, which aren't able to be tightened with a screw driver. I think the hardest part of the whole thing was putting the fan on, afterwards. Getting the clip to stay in the groove while you hold the fan with one hand and snap each end into place with the other was a challenge. Once you figure out the trick, it's a piece of cake. Just like most in this category, unless you have a cutout that gives you access to the rear of the motherboard, your going to have to pull it out of the case to do the install. Also keep in mind that any side panel fans you have will probably get in the way if they're directly over top the CPU. Only very wide cases are immune to this, and I haven't come across too many of those.

Since I had the Titan Fenrir Evo in for review at the same time, I put the Vapor 120 head to head against it, along my own Thermaltake Ultra 120. Going by first impressions, I would have thought that the Fenrir was going to come out on top. As you can see, this is far from what really happened. Then once you slap on that second fan, the temps drop another degree. If I wasn't a believer in the golf ball dimple mumbo jumbo before, I am now. I'm saving this sucker for when I upgrade to a new CPU. This goes to show you that just like other aspects of life, size isn't everything.

To check how loud the fans were, I turned everything in the house off, except for the a server, and plugged in each fan. The fan that comes with the Vapor 120 was the loudest by a small margin. You can tell it's really cranking out some air. The second fan, that Zaward sent along, was considerably slower and quieter than any of the others. This could be the reason there was only a one degree drop in temperature when it was added. It think it was intended to be more of a case fan, not a heatsink fan. After all the benches were already done, I came up with a idea. I added the faster of the two as a second fan on the Thermalright Ultra 120, which is back in my computer, to see what would happen. The temperature with it dropped 2 degrees. So if you plan on adding a second fan, you might want to consider choosing one faster than the one they provided for the review.

I would have never thought that this small, unassuming heatsink would be such a beast. It pulled better at-load scores than the rest of the competition. And since it's smaller, it was that much easier to install onto a motherboard that was still in the case. If I weren't saving it for a future build, I'd be using right now, it instead of my Thermalright Ultra 120. Sure, it's not going to win the beauty pageant, not that it's ugly. But it is however, going to be the one you're gonna want to take home to momma. 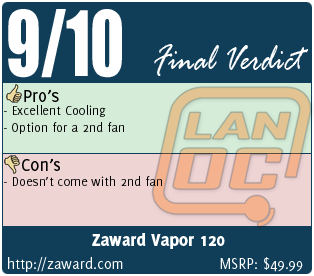 We have 1037 guests and one member online