When you pay hundreds of dollars or even thousands for a gaming pc, you expect quality.  That includes not having your machine sound like a sad excuse for a vacuum cleaner.  Fans are a critical component in any machine, cooling your vital components and allowing for optimal performance.  Unfortunately, typical stock fans or any fan short of the expensive ones often sound noisy at full power.  This is the point where you pick up a fan controller, a device that in truth, controls the amount of power your fans get.  Using one of these gadgets allows for minute adjustments in fan speed, allowing for a perfect balance of noise as well as cooling.  Now, fan controllers are an age old pc accessory, but that doesn't stop manufacturers from trying to perfect the technology.  Lamptron has cooked up three different iterations of this tech, and graciously sent us one of each to tinker with.

Review Pics by: Wes and Tomikaze 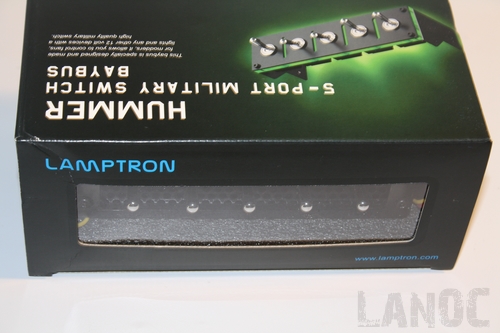 The boxes for all three products are identical so I'll review them as such.  On the front of each box is a transparent plastic window that allows the consumer to see the front of the device, an important aspect since the front is what will be showing in the typical user's pc.  The two smallest faces of each box display the features and specs of the contained device, and the other sides display a static picture of the product in question.  Inside, the fan controllers rest snugly, packed with a dark gray foam. 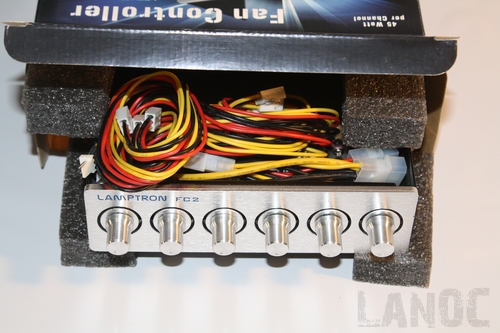 Packed so efficiently in fact, Herculean strength is required to remove them.  I would pay someone cash money to show me one of these that had broken due to package trauma.  The packaging seems to be 100% indefatigable. 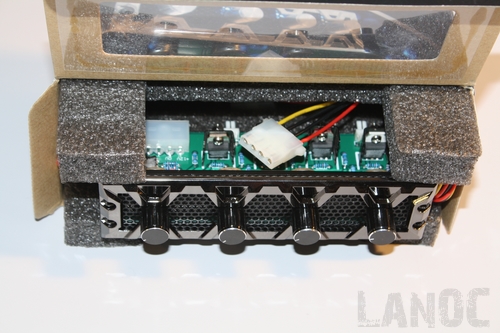 All three controllers install pretty much the same.  You attach a single standard molex power connector from your power supply to the device, and a fan connector to each fan you want to be able to adjust.  Then you simply slide the device into a 5.25" bay.  Lamptron kindly provides a full compliment of black screws to secure the controllers, provided you don't have a tool-less case design.  Pretty slick.  The real difference seemed to lie in how each individual controller fit.  The FAN-ATIC fits the easiest, with plenty of room to wiggle around. However, this seemed to be because there is very little to the baybus itself.  Of the three, the FAN-ATIC easily is the shortest and weighs the least.  Not fragile per say, but I wouldn't put it up against the other two in terms of durability. The FC-3 and FC-2 have additional padding on the bottom as well as being much longer.  This makes them fit rather snugly, and in the case of the FC-2, almost too snug.  Indeed, without a little metal bending and coaxing, I had trouble getting the FC-2 into the bay.  Of course, that means once you actually get it installed you have the luxury of knowing that it's not going anywhere.  All of this extra material gives the impression that both the FC-2 and 3 are high quality products, as they are quite hefty in comparison with some cheap, plastic bay devices I own. 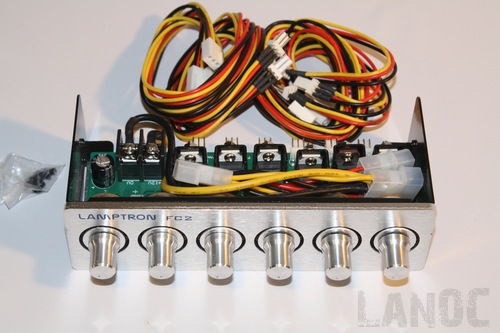 Fans Used ( 2 x 80mm Thermaltake A2016) They all work.  Well, that's not fair - when you buy something you expect it to work.  What you want to know is the subtle nuances of all three.  The FAN-ATIC is easily the most interesting of the three.  Unlike the others, which are almost infinitely variable, this one has only 3 settings: high, low, and off.  Per the specifications high can be defined as twelve volts, and low as five.  A nifty little feature that allows you to identify which is which is the colored LEDs that correspond to the selected setting. 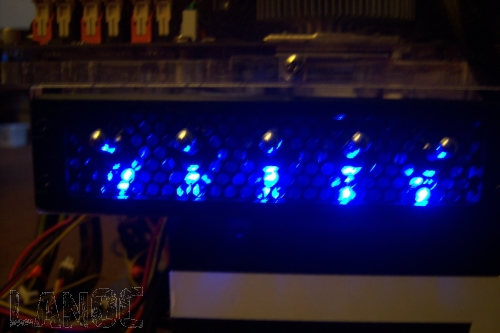 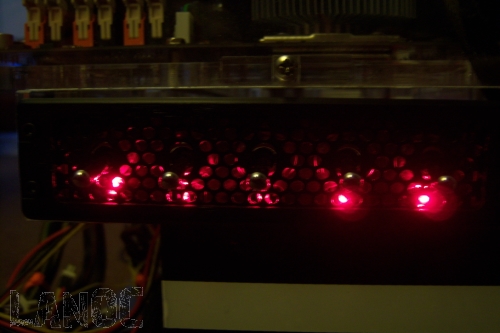 Unfortunately, as cool as this is, you inevitably trade this style for substance.  The three settings are all you get and there's no way to adjust them.  So if high is a little too high for you, and low is a little too low, you're better off with the other two more traditional controllers.  It's a tough call between the FC-2 and the FC-3.  Both function in much the same way.  A moderate difference is the number of controllable fans each can have.  The FC-3 can only have four whereas the FC-2 boasts six.  For those who are curious, the FAN-ATIC rounds off your options with five. 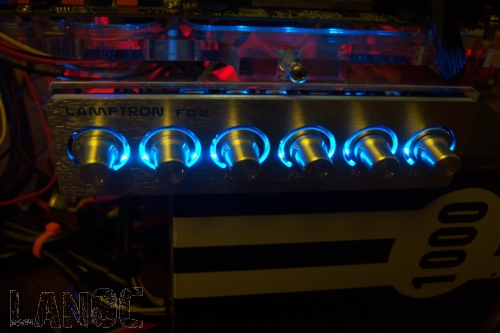 They both feature blue LEDS that vary in brightness as you adjust the fan speed. 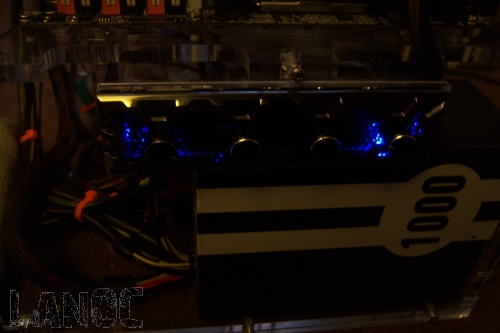 Style really is the most striking difference between the two.  Even then, like the FAN-ATIC, both are available in silver as well as black, so it really comes right down to the actual physical design and how well it would mesh with your case. The FC-2 is the only one with any labeling on the controller itself, numbering the fans one through six as well as exclaiming the Lamptron logo in the top left. A subtle nitpick I had was with the knobs on the FC-3.  One of them came off right in my hand.  With enough persuasion I could pull the rest off.  That makes me doubt its long term durability. Conclusion Any one of these three fan controllers would make for a wonderful addition to a case as it seems Lamptron's main focus is bringing out multiple quality products so that the average consumer merely has to pick the one that clicks for them.  This is further evidenced by the fact that Lamptron offers yet another 5-port military switch they've named the HUMMER.  Of all the fan controllers I've seen, Lamptron's offerings easily outweigh most of the others in terms of quality, and at a reasonable price tag to boot. 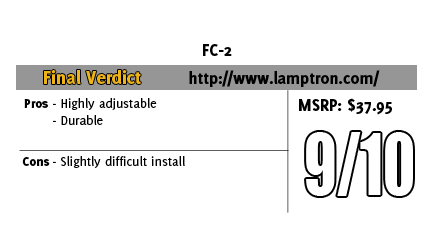 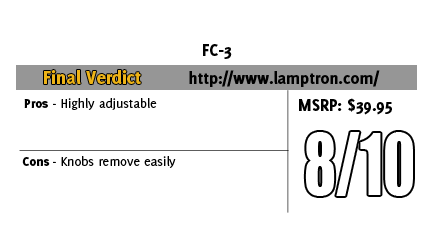 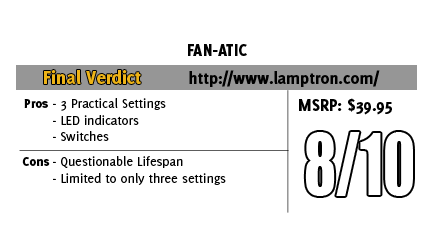 You might call him obsessed or just a hardcore geek. Wes's obsession with gaming hardware and gadgets isn't anything new, he could be found taking things apart even as a child. When not poking around in PC's he can be found playing League of Legends, Awesomenauts, or Civilization 5 or watching a wide variety of TV shows and Movies. A car guy at heart, the same things that draw him into tweaking cars apply when building good looking fast computers. If you are interested in writing for Wes here at LanOC you can reach out to him directly using our contact form.
Discuss this article
Log in to comment
Posts in discussion: Lamptron FC-2, FC-3, and FAN-ATIC Fan Controllers