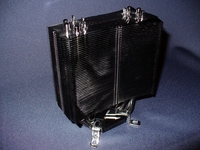 We have tested CPU heatsinks in many different shapes and sizes. Some are ugly and sin but perform amazingly. Others have lights and other features to get your attention but at the end of the day do not outperform comparable heatsinks without all of the flash. Thermalright, a well-known and respected heatsink manufacture has produced a stylized black version of one of their best performing models the TRUE 120. Today we are going to find out how it compares against the other heatsinks that we have tested in the past. If looks are anything to go by (and we have found in the past that they are not) the TRUE Black 120 from Thermalright should blow everyone out of the water.

Review by: Wes Compton AKA Garfi3ld

Pictures by: Wes Compton AKA Garfi3ld 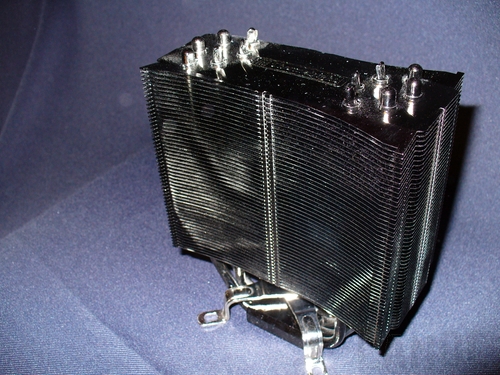 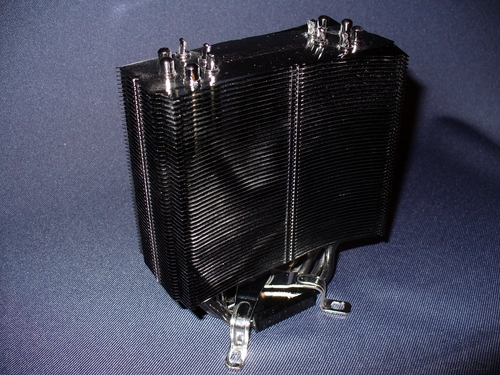 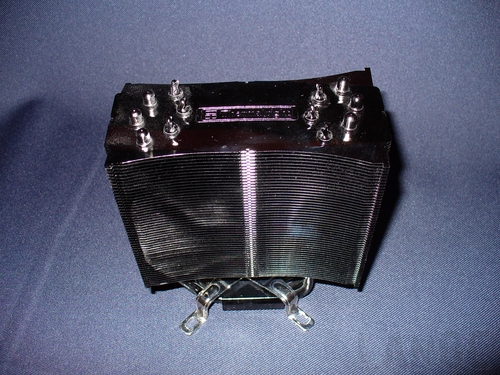 When we tested the HR-03 GT from Thermalright a few months back we got a taste of normal Thermalright packaging. They normally pack their items up into a basic cardboard box with nothing more than the product name on them. The TRUE Black 120 stands out from that crowd because even though it is in similar sized box they used a black packaging. Apparently, they wanted make this heatsink stand out from the others even more. It still would be nice to be able to see the heatsink without having to open it all up. 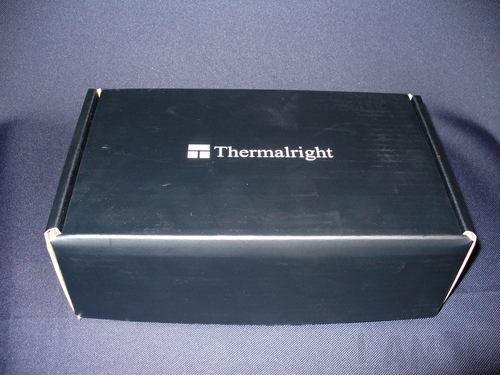 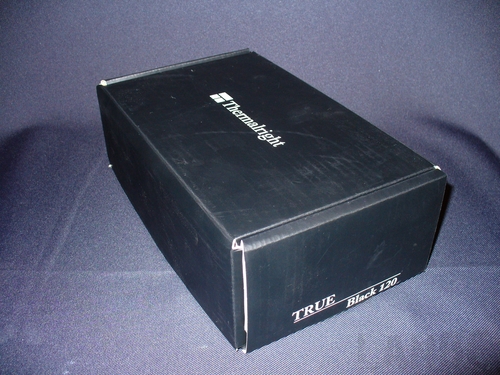 Digging inside of the packaging you will find the heatsink packed away tightly in foam to keep it safe. The heatsink itself is also inside of a plastic to keep fingerprints and Drool off. Other than the heatsink, you will also find a Thermalright sticker, brackets for both AMD and Intel motherboards, two sets of fan brackets, a small tube of CF 2 thermal paste, and instructions. After pulling everything out and checking it out I can honestly say that this heatsink is amazing looking. The black really sets everything off making the heatsink almost a work of art. 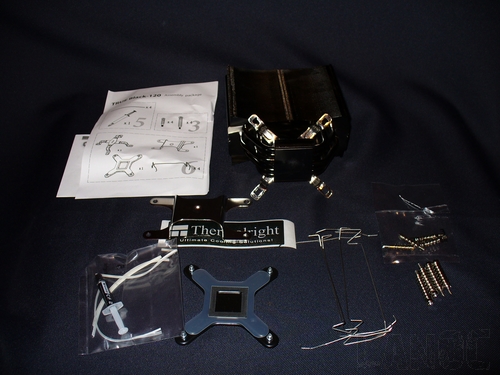 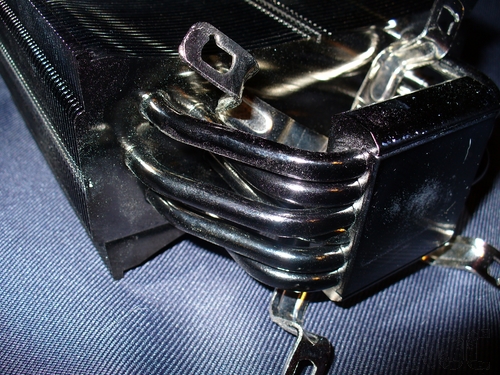 Installing the TRUE Black 120 onto our Intel q6600 and our 680i-based motherboard requires that we remove the motherboard to install the back plate. Even though I am not a fan of this style of mounting, I understand that with large heavy heatsinks it is less strain on the motherboard if there is a strong backplate. The backplate for the TRUE Black installed just like normal, a little bit difficult to keep lined up but if you use two of the screws to hold it into place while you reinstall the motherboard you will not have any problems. Once everything is back together, you want to get the heatsinks ready for install by sliding the 775 bracket in and then spreading it to an X shape. The first time you do this, it will be hard to find the correct angles to light it up with the holes. Once you have it lined up, you install your thermal paste and line the heatsink up on top of the CPU. Installing the first two screws is easy, I recommend starting with the two hardest screws. The last two screws may fight with you because you have to push down to get the mount close to the motherboard. I had a few times where the screw popped out from under the screwdriver and I almost stabbed the motherboard. Once I got the hang of it I had no problems after that, I have installed the heatsink at least 6 times now. 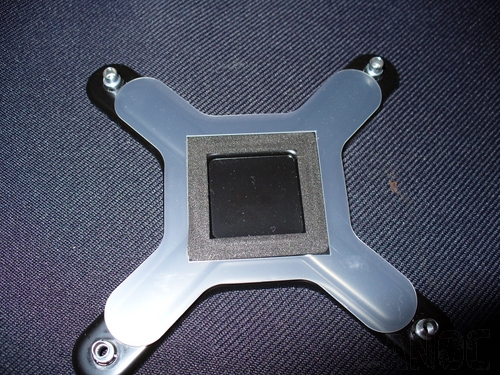 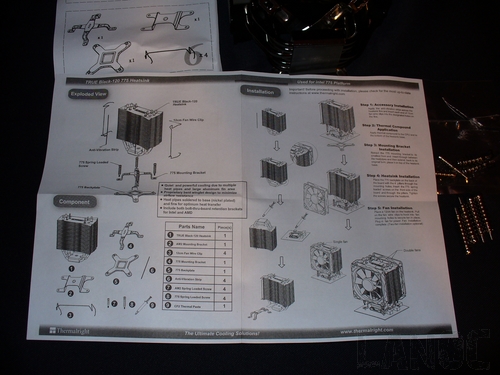 Well we put the TURE Black 120 from Thermalright through the same exact testing we did on all of our other heatsinks. Our standard test consists of letting the pc idle with nothing but realtemp 2.5 running and recording the lowest average temperature reached. For our load testing, we ran prime95 for an hour on all four CPU cores. The highest average temperature reached is our result. While doing all of our testing no matter the time of the year we make sure the ambient temperature is at 70 degrees. Our CPU clock is set to stock settings and all of the fans on our Antec Twelve Hundred are turned on the max setting. Because of the case, some of our results may be lower than tests run in cases with less airflow. 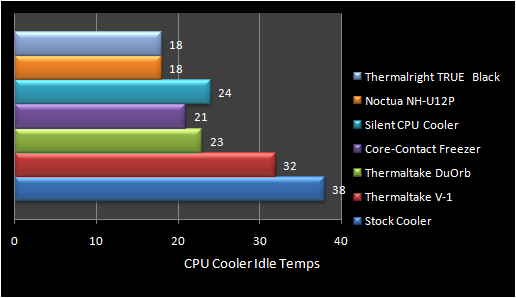 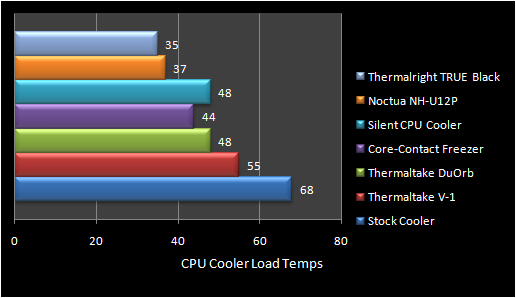 The results do not lie; we were amazed earlier this week by the performance of the Noctua heatsink. The TRUE Black matched that performance at idle and outperformed under load. One thing I want to note about our idle temperatures, even though we are reading temperatures lower than ambient we have no adjusted our results in order to keep an accurate reading from heatsink to heatsink. Outside of our standard testing I also used this heatsink in my personal computer for a while and was able to run a stable overclock of 3.8 with my Q6700. Even with that level of overclock, I never had to worry about heat. 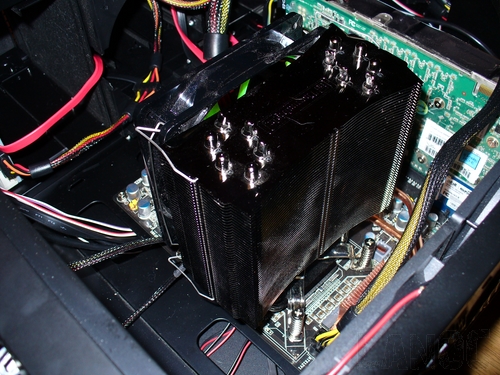 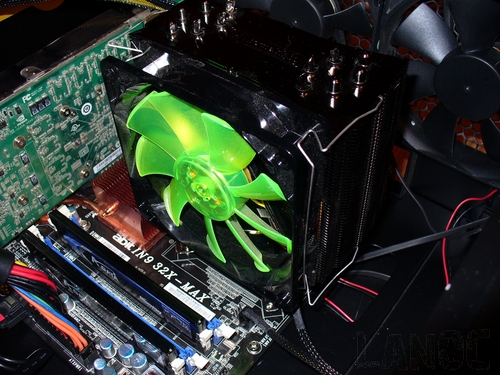 Well it outperformed all of the heatsinks we have tested in the past. It is also the first heatsink that ive ever seen that truly looks like a work of art. I highly recommend this heatsink if you are not worried about how much to spend and want the best. Pick up a good quality fan; we used the Gelid Solutions fan in our testing and not only did it perform very well, they look amazing together! The price of the Thermalright's TRUE Black 120 will scare some away, but you really do get what you pay for with this heatsink. That is saying a lot considering it does not come with a fan. 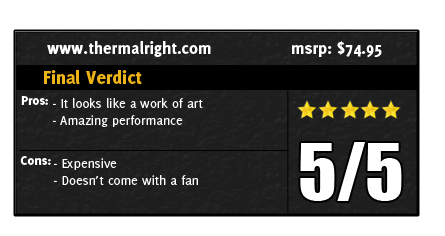 You might call him obsessed or just a hardcore geek. Wes's obsession with gaming hardware and gadgets isn't anything new, he could be found taking things apart even as a child. When not poking around in PC's he can be found playing League of Legends, Awesomenauts, or Civilization 5 or watching a wide variety of TV shows and Movies. A car guy at heart, the same things that draw him into tweaking cars apply when building good looking fast computers. If you are interested in writing for Wes here at LanOC you can reach out to him directly using our contact form.
Discuss this article
Log in to comment
Posts in discussion: Thermalright TRUE Black 120