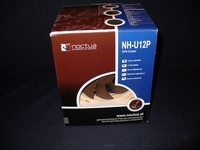 In the past 6 months, I have gone from not knowing who Noctua is to having a great amount of respect for them. We have seen their thermal paste and fans amaze us repeatedly. Today we get to see if they can include the same level of detail and research that we have seen in their fans into their heatsinks. Noctua shipped us a NH U12P heatsink for us to check out. We are going to put it through our standard tests to see how it compares to heatsinks from other big name manufactures. 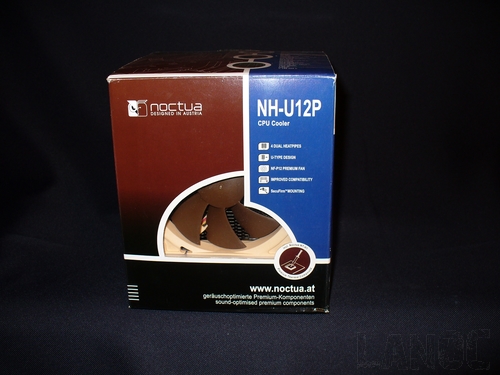 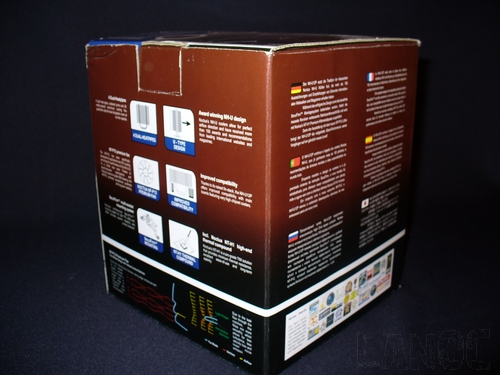 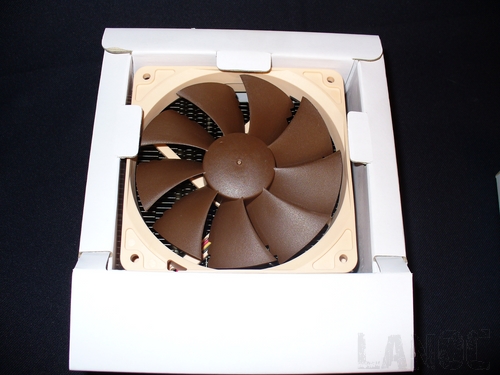 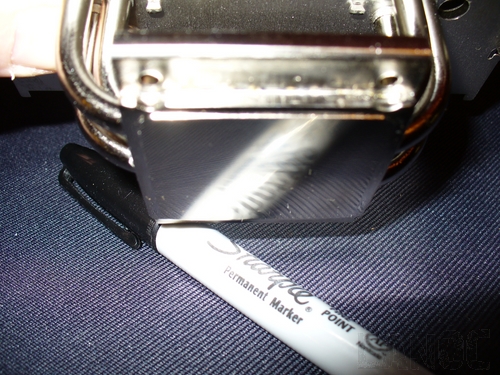 The NH-U12P packaging has typical Noctua styling with their blue and brown color scheme. The front of the packaging includes a window showing off the Noctua NF-P12 fan that they included along with the heatsink. The right side has a diagram showing the installation on both Intel and AMD motherboards along with diagrams with full measurements. This way you know what you are getting into with the install, and you know if the heatsink is going to fit in your case. On the back of the box, you will find a picture list of the main features of the NH-U12P. 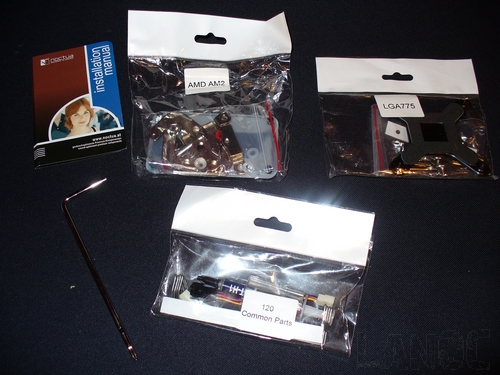 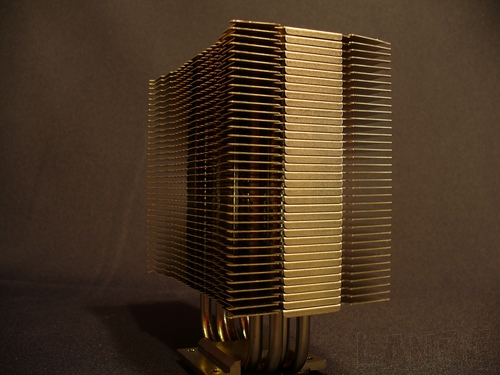 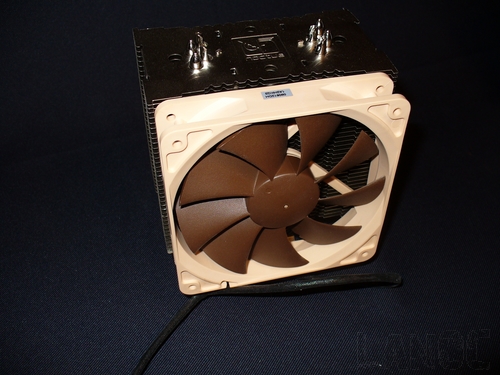 Inside the box, Noctua packed the heatsink and fan securely in cardboard. They also included a large box of parts. After pulling everything out I was very impressed with how they labeled all of the bags. The detail they do is amazing including the included full tube of thermal paste and the long screwdriver. Its details like those that bring Noctua to the top. The instruction book was a little concerning when I saw the size, my concern was later proven wrong when I open the instructions up. Not only are they descriptive but they are also very well layed out, there are separate pages for the Intel and AMD instructions. 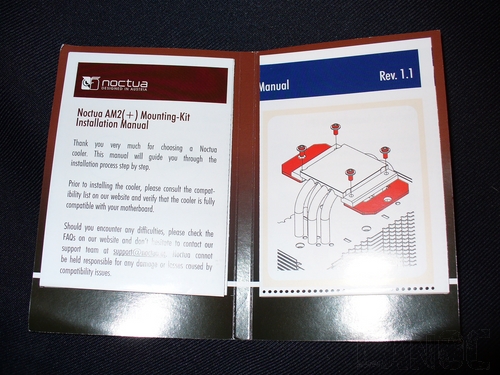 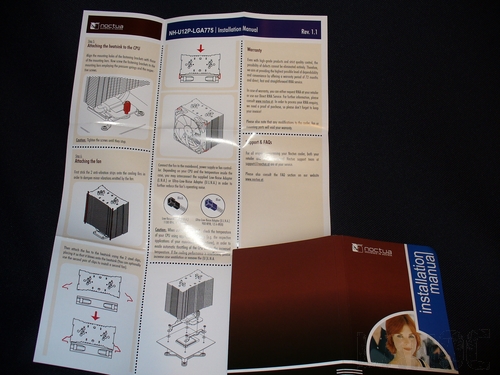 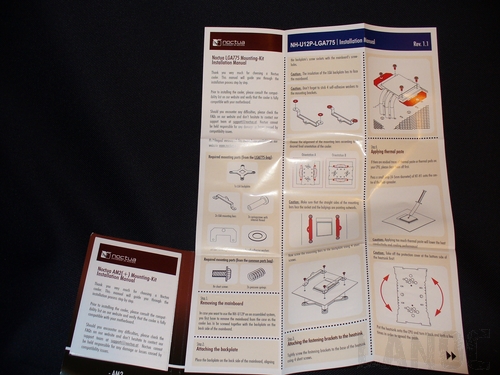 The installation for the NH-U12P was similar to the Thermaltake DuOrb. You do have to put a backplate on under the motherboard but other than that issue, it installed very smoothly. Any questions I had about how things should go were answered quickly by looking at the wondering instructions that Noctua included. The labeled and sorted bags made it easy to find the parts I needed without having any extra parts. I do wish that there were a way to install the fan to the heatsink before installing it; you cannot do this due to where the mount screws are located. In the end, the installation was simple and fairly standard, but Noctua did a good job of making it as easy and they could with good instructions and good organization. 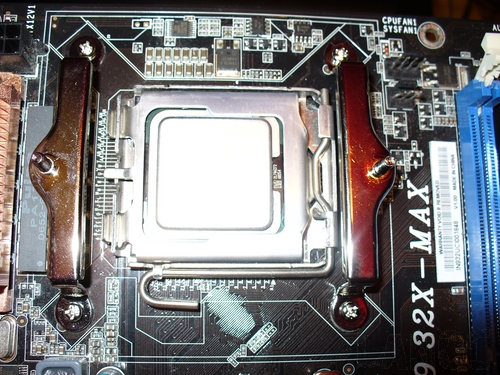 Performance In order to see how the NH-U112P performs I put it through our standard heatsink tests. Our standard test consists of letting the pc idle with nothing but realtemp running and recording the lowest average temperature reached. For our load testing, we ran prime95 for an hour on all four CPU cores. The highest average temperature reached is our result. While doing all of our testing no matter the time of the year we make sure the ambient temperature is at 70 degrees. Our CPU clock is set to stock settings and all of the fans on our Antec Twelve Hundred are turned on the max setting. Because of the case, some of our results may be lower than tests run in cases with less airflow. 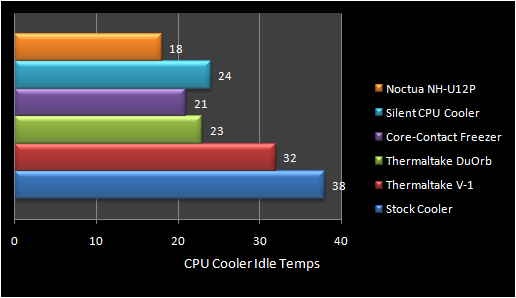 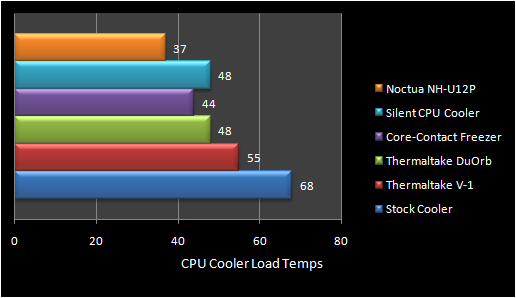 As you can see in the graphs, Noctua's attention to detail has show in the performance. With an idle temperature of 18 degrees the NH-U12P out performed even our best heatsinks by a full 3 degrees. Frankly, I am not sure how I was able to get results that are less than ambient temperature, I redid the testing just to be sure, but ended up with the same results. Although considering the heatsinks we tested against the 3 degrees was a very good improvement, most will focus on the load temperatures. At 37 degrees, it was 7 degrees lower than the nearest competitor. Even more impressive is the load temperatures with the NH-U12P were lower than the idle temperatures with the stock Intel heatsink! With those numbers, you would expect to too listen to an extremely loud fan, but surprisingly this isn't the case. As we have seen before in the testing, Noctua's fans perform well with little or no acoustics'. 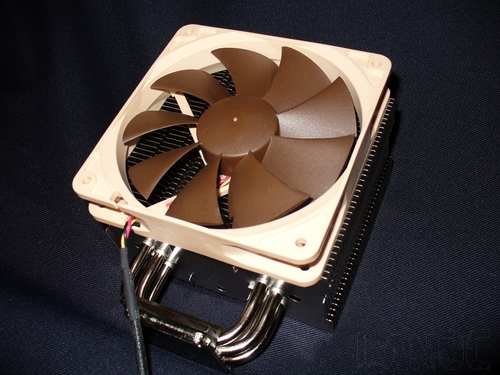 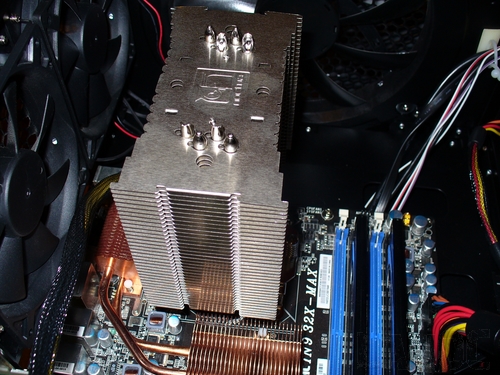 After outperforming, all of the other heatsinks that we have tested in the past I'm very impressed with the NH-U12P. All of that performance with little or no acoustics is also very impressive, this makes the NH-U12P perfect for people with open-air cases that will be affected the most with the sound. The only real downside to the heatsink is the price, at under $70 it is still less than some other heatsinks though. Even the installation was made as easy as possible due to Noctua's attention to detail and organization of the parts. Overall, I do not think you could ask for a more well rounded heatsink for your next build, I highly recommend checking this one out! 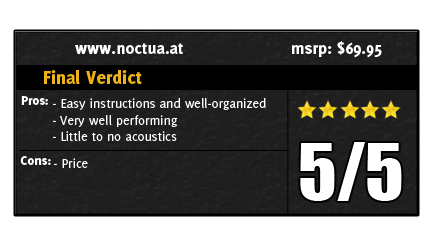 You might call him obsessed or just a hardcore geek. Wes's obsession with gaming hardware and gadgets isn't anything new, he could be found taking things apart even as a child. When not poking around in PC's he can be found playing League of Legends, Awesomenauts, or Civilization 5 or watching a wide variety of TV shows and Movies. A car guy at heart, the same things that draw him into tweaking cars apply when building good looking fast computers. If you are interested in writing for Wes here at LanOC you can reach out to him directly using our contact form.
Discuss this article
Log in to comment
Posts in discussion: Noctua NH-U12P CPU Heatsink