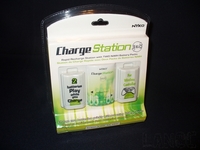 There isn’t anything like being in the middle of a game and having to stop to change batteries. Let’s hope you have fresh batteries someplace in the house. If not its going to mean you’re going to have to make a quick trip to the store to pick up few AA batteries. This is where Nyko comes in with their Charge Station for the Xbox 360. Check out what we thought of it. 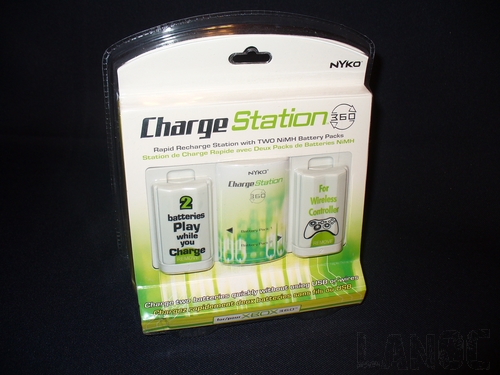 The Charge Station came packaged in your standard sealed plastic bubble package. The kind that you need to bring in a chainsaw or one of those knives you get on television to open it. Once you get past the plastic, you will notice they have placed stickers on both of the included batteries. The rest of the front repeats that you can charge two batteries at once three times, five if you count the Spanish also.

The back of the packaging includes a feature list. Cutting through the FUD it points out that it take 4 hours to charge two batteries, and 2 hours if you are only charging one. The batteries are expected to last 25 hours of play. It also lets you know it is CE and UL approved and that it doesn’t require an usb port to charge. They have also included a drawing of a battery going between the controller and the charger. Again everything is also repeated in Spanish in case you need that. Overall the packaging is simple, but really what more could they do too get your attention, its batteries. Batteries are one of the items you don’t even think about until they don’t work. 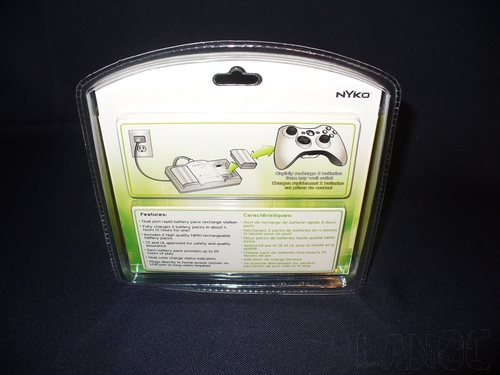 My biggest problem in testing these is that I really haven’t been motivated to play any console games. I did find the time to give them a try though. They come with some charge out of the box but I went ahead and recharged them so I know that I will be getting top performance from the Charge Station. In comparing the batteries to the Microsoft battery’s they don’t have the rounded off look. They have more of a zig zag design on the bottom. They fit the controllers perfect and you don’t ever notice the difference between the two during use. The charger will charge Microsoft battery’s as well as the Microsoft charger will charge the Nyko batteries. It’s good to know that you won’t mess anything up by putting in the wrong batteries.

There is no way that I am able to test that the batteries will work for a full 25 hours. I do know that I haven’t had to charge them in a few weeks. But as I said before, I haven’t been very active on playing my 360 recently. 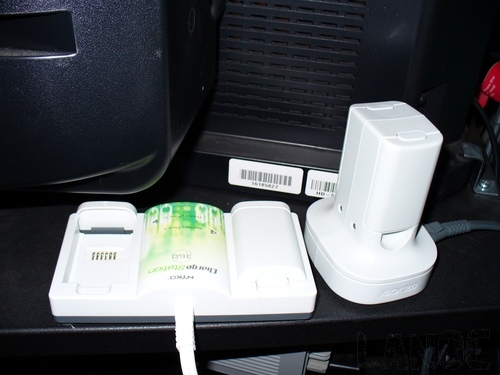 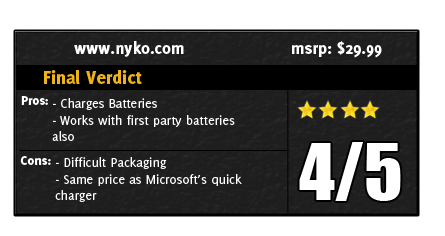 You might call him obsessed or just a hardcore geek. Wes's obsession with gaming hardware and gadgets isn't anything new, he could be found taking things apart even as a child. When not poking around in PC's he can be found playing League of Legends, Awesomenauts, or Civilization 5 or watching a wide variety of TV shows and Movies. A car guy at heart, the same things that draw him into tweaking cars apply when building good looking fast computers. If you are interested in writing for Wes here at LanOC you can reach out to him directly using our contact form.
Discuss this article
Log in to comment
Posts in discussion: Nyko 360 Charge Station

We have 1569 guests and no members online