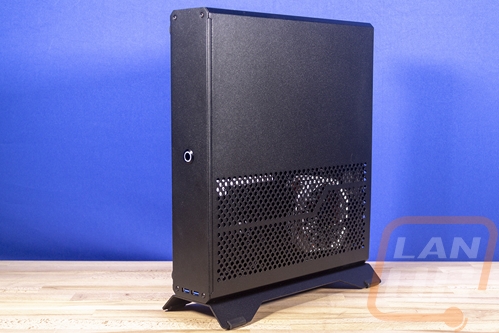 Typically I would split up this section into two, one for the inside and another for the outside of the case. The Sentry 2.0, however, is just an amazingly small case at 6.9 Liters in total volume so it was best to combine them. So the overall design of the case is very similar in size and shape to the Xbox One and PS4. It’s not a big surprise that those consoles have gone to this shape given its efficiency. But both of those use much older tech and it is all custom made for that design. Dr Zaber has managed to fit our traditional PC components in the same form factor. Now they aren’t the only case in this shape. Fractal has the Node 202 for example and Silverstone has designed a whole list of cases with this layout. But the Node 202 is 10.2 liters and the RVZ03 from Silverstone is 14.04 liters. At 6.9 liters this is a different class if you ask me. In fact, I think there are only two other cases on the market that are smaller that still use the SFX power supply.

Now that we have gone over the scale of the Sentry 2.0 I can finally dive into what it is all about. This is an all steel case and Dr Zaber didn’t skimp out with ultra-thin material, they used 1mm thick steel which gives the case some weight and a lot of structure. That is then powder coated with a textured black finish. The finish does have a little gloss to it and I think I might prefer a more industrial matt finish. It was harder to photograph so I do have a little bias there, but I also just think a matt finish would look a little better. If you look closely, you can see that the case has a main panel on the front, as far as structure goes this wraps around the bottom of the case. The top wraps around the ends and the top is removable. It isn’t just a simple box shape though, the corners on both sides do have an angled chamfer. The right side (which is also the top when the case is laying flat) has a lot of ventilation on the bottom half. There is also a small line through this which I’m not sure if that is for styling or to add a little structure to that area. Other than that, there is nothing else going on that side of the case. 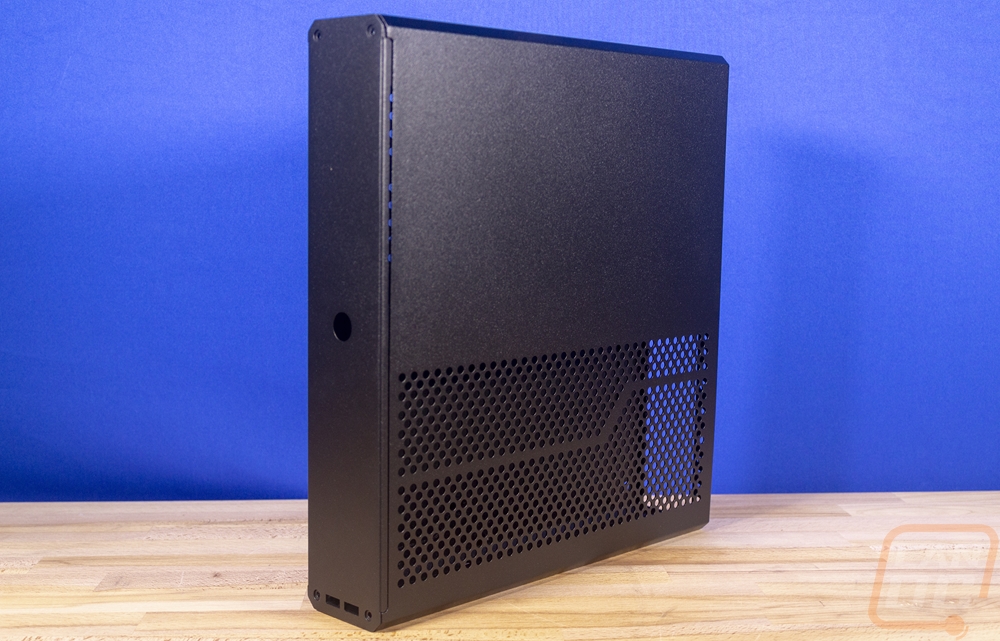 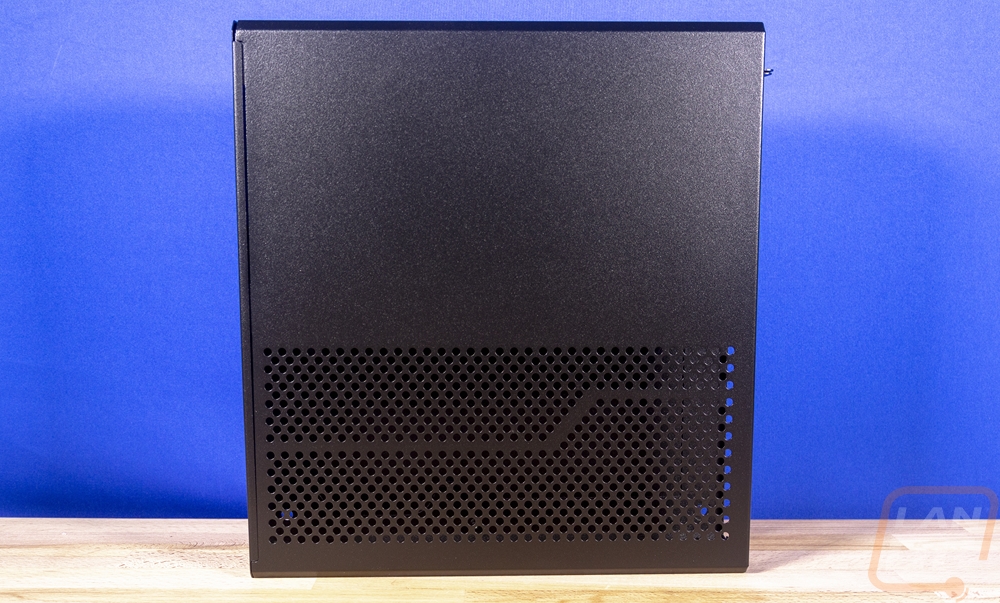 Around on the back, you can get a better idea of the layout. On the left is the hole for the motherboard rear I/O shield. You can also see they slipped in three holes just above that which I think are for wireless antennas should you need them. Obviously, you can’t run a video card and a PCI wireless adapter in this design so if your board doesn’t have them in the I/O shield those will come in handy. From there, in the middle is a power connection hole. Like I said earlier there are a few things that don’t come installed, this is one of them. Then next to that is a dual PCI bracket. The top of the bracket has a clamp down bracket over it, this is integrated into a bracket we won’t see until we open the case up. This is where they tucked away the badge. You have the model name, version number, unit number, and all of the required stuff like the CE logo. Also on the back, you can see that they tried to get as much ventilation as possible anywhere they could with additional holes above and below the PCI slots as well as the I/O hole. 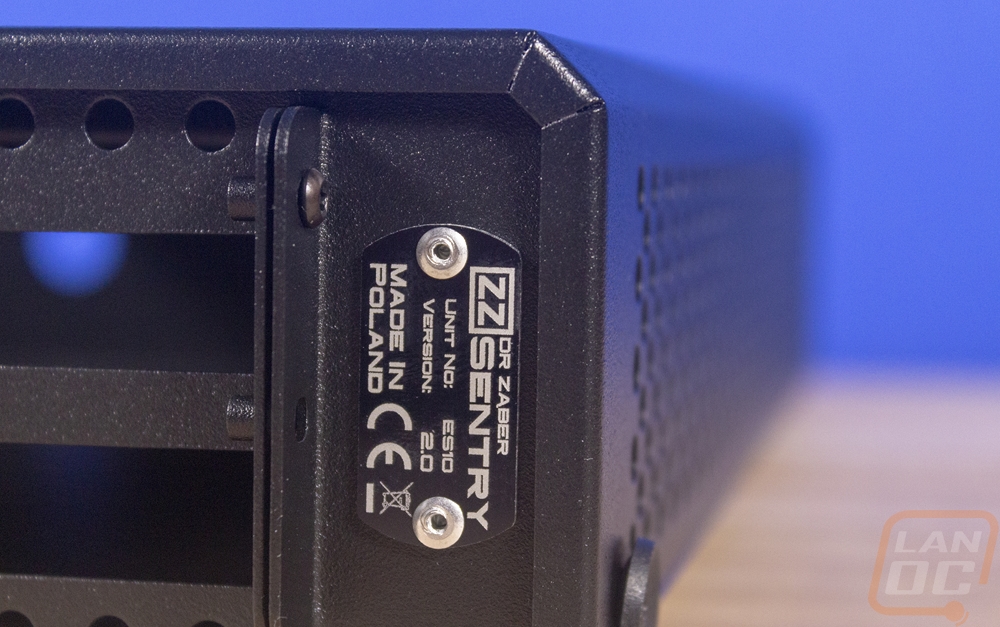 Around on the front, you can see a few more holes where things would normally be installed. The middle hole is a vandal switch hole for the included vandal switch power button with an LED ring. The included switch has a red ring, but being a vandal design you could pick up any design you want including ring or dot shapes for the LED along with any LED color you might think of. Then over on the right, there are two square holes where the USB ports are. The screws next to them are how you mount the included dual USB 3.0 adapter. I would have preferred one to be Type-C or even better a Type-C in addition to the two ports but they did address this in their list of feature requests. It was asked for, but they are waiting for a standard cable design that includes Type-C to be available. We have to remember they are still new to this and they don’t have the purchasing power to have a custom cable design made without it costing a lot.

The left side of the case is just like the right with two exceptions. The large ventilation area is up on the top on this side and if you look closely you can see the PCI brackets showing us this is the ventilation for the video card area. This side also has four holes in it, one in each corner. These are for the horizontal mounting feet. They also include plugs to use if you don’t use feet here. 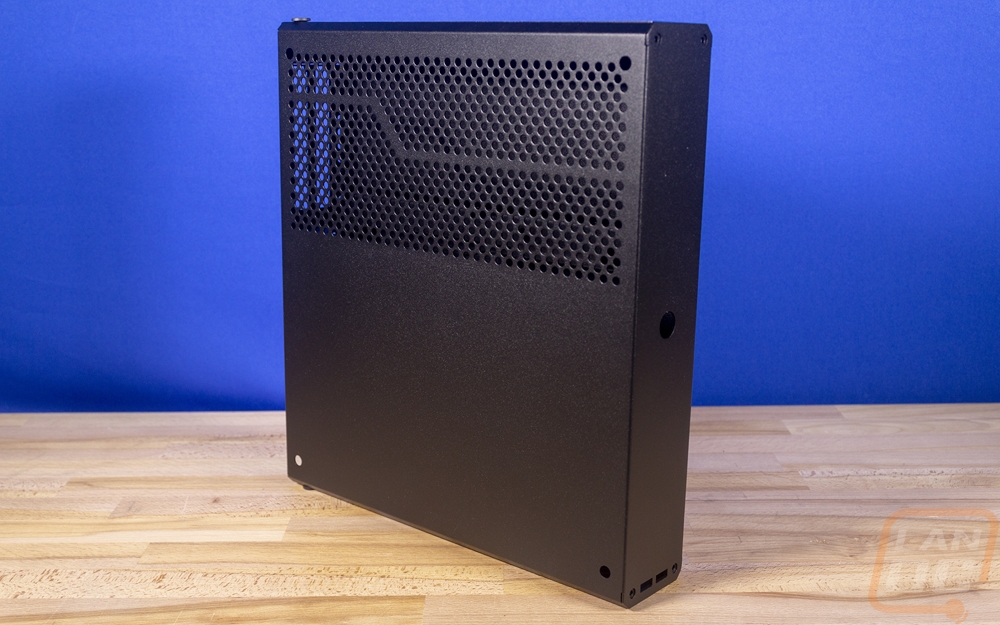 Both of the thin ends of the case are completely covered in those same round ventilation holes. You can see that as the case ships the two screws that they hold the top panel on are used with rubber washers. These aren’t permanent, they are just to keep the screws snug without them being tight and hard to remove. It also helps you find which screws you need to remove, it’s the only two screws installed on the outside though so I doubt you will miss them. One of the thin sides does have an extra set of holes. They look just like the mounting holes you would find on the back of a power strip, these are where you mount the included vertical stand.

When you pull the top cover off the Sentra 2.0 you will find a box welded to the underside on the GPU side. This was an interesting design choice and I did a little reading on the Zaber website about it. This is what they are calling an optimized air pocket. This fills in an air gap that sits between the backplate of your video card to the top of the case. The idea for this is to prevent a hot air pocket from building up by filling the space. It seems to be especially important for when the case is in use sitting horizontally where heat from the video card would go directly up. In a vertical orientation, the heat would rise up into normal ventilation. It also helps keep the video card closer to the side panel where it can pull in cool air. This was on the original design but has been redesigned to increase its size and rigidly. 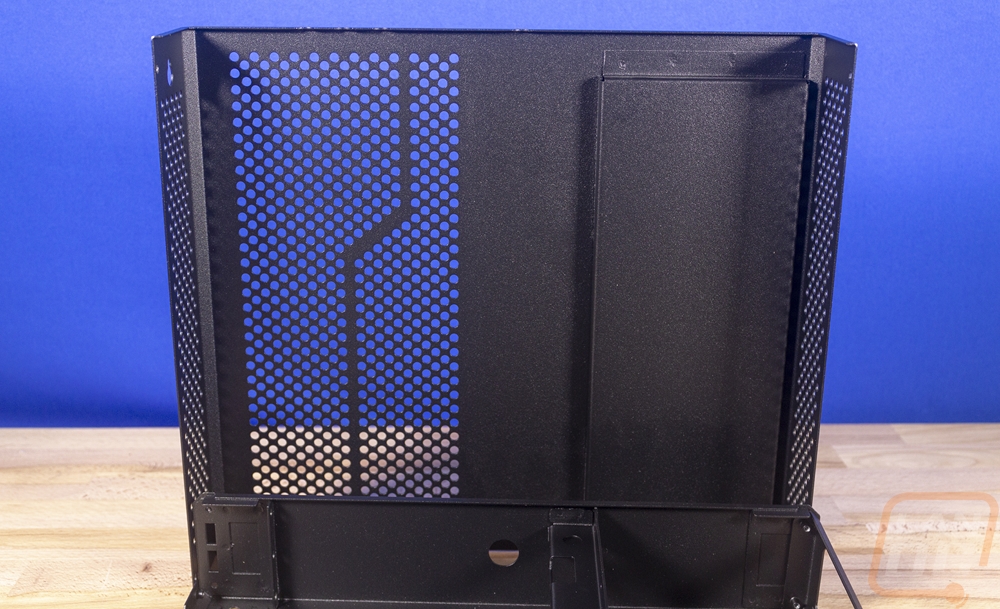 So here is the full layout of the case. On the bottom left you can see the four ITX motherboard standoffs. Directly above that is the power supply mount. There is then a bar that runs across the middle of the case and then the entire right side can be used to fit full-length video cards. The Sentry 2.0 design did change to give you a few options in this area especially. You can run a shorter 170mm ITX video card and that leaves just enough room to fit a 120mm radiator. The middle bracket was moved over slightly to accommodate a radiator and that also means there is nor a little more height available for the video card. In total there is 145mm but you have to also account for the power connection as well. So taller cards that step down to a standard height for the power connection will be possible if they are under 145mm tall. As for the radiator support, in addition to only supporting a 120mm radiator you only have 50mm in total height with the fan and radiator together. So you will most likely need to run a low profile fan to get that to work. You also have the option to not use the space for a video card or a radiator and if you do this you can fit two 3.5 inch hard drives or one while using an ITX GPU. The Sentry 2.0 ends up being surprisingly versatile considering how compact it is. 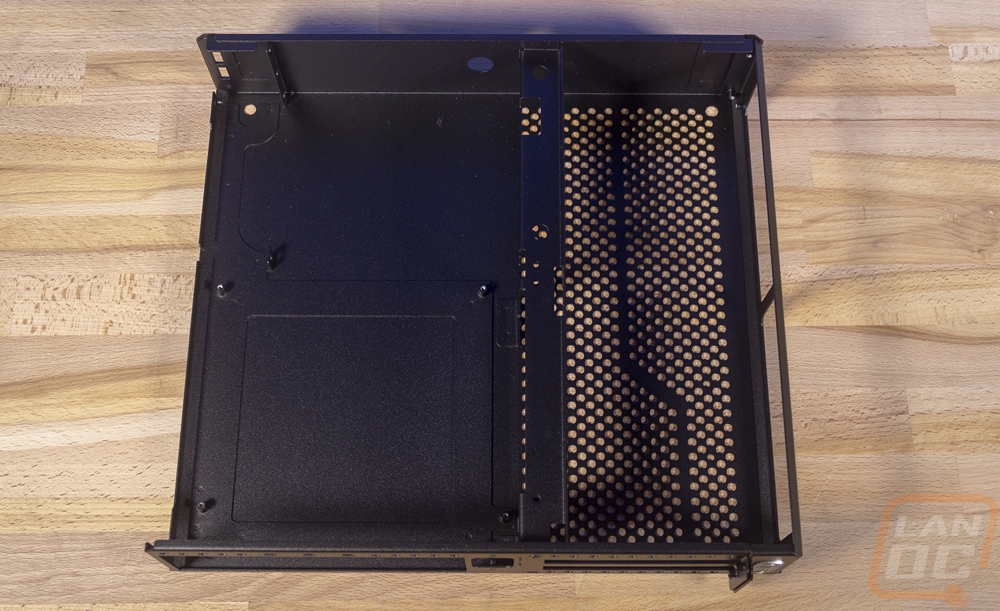 Clearance over the CPU is a concern as well with that having 47mm in height clearance. Leading up to this review I was trying to line up a water cooler for testing and a lot of the options from Cooler Master, for example, were too tall in their pump housing. Not to mention with air coolers this means there are just a few options. Some stock coolers will fit, I’ve tested a whole list of ITX coolers you can find some of them HERE. I ended up going with the Cryorig C7 Cu which I really liked in our review, it seems to be the best option considering the height limit. Memory has to be standard height as well to not block the 2.5-inch drive bracket that mounts above them.

We have 974 guests and one member online