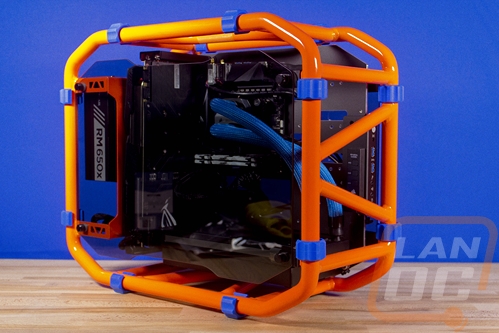 So before diving into my build, I did have to dig out the case screws and the instructions. The instruction manual unfolds out like a poster and is in full color. The screws come in individual bags inside of a nice thick plastic recloseable bag. Most have stickers that show what they are, with the exception of the basic screw that is used for the motherboard, PSU, etc. Now the cases age shows a little here, simply because they are all chrome screws where black has been popular for a long time. 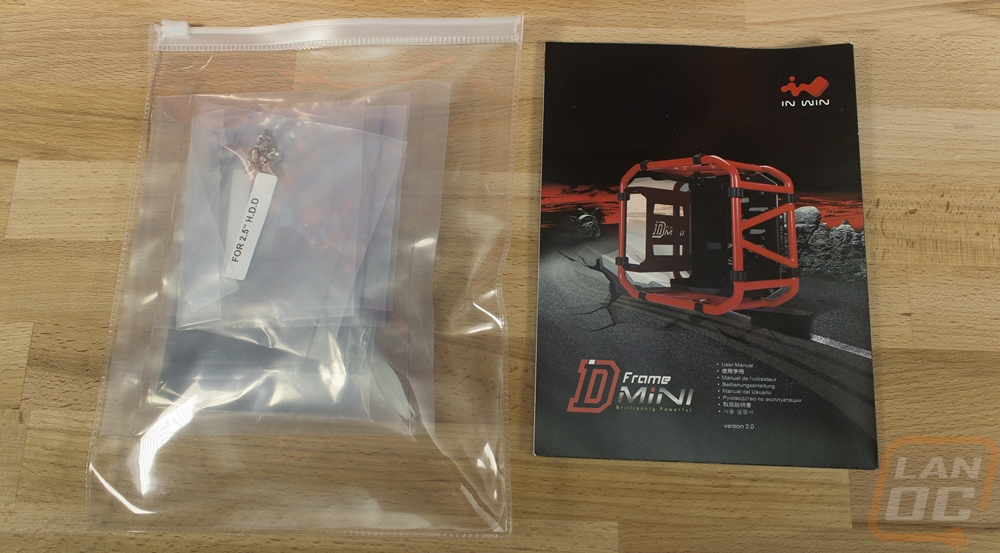 So I have had the orange case sitting in the office for far too long now, waiting for me to catch up with some of the backlog of reviews from our move. But I never really locked down what would be going into it. So when I decided to get this build together, I was sorting through some of the hardware that I had in the office and I had everything needed for a kickass build. I was really torn on if I should go with the new Ryzen CPU or the i7-8086K that would be similar to the Devils Canyon CPU in our original D-Frame Mini build. I ended up going with the 2700X simply because I thought the ITX board from Asus looked better. Sometimes I’m superficial when it comes to my builds what can I say. Then to match I went with the Strix GTX 1070Ti. For storage, I just finished the review on that scorching fast WD Black NVMe M.2 SSD and the 1TB capacity was enough for this build. Then everything else was from Corsair, ironically all sent for different reasons.

The PSU was sent because we needed to have a few PSUs on hand just in case of builds like this. The 650-watt capacity will do the job. It is fully modular as well, opening up cable options for later on should I go crazy with the build. The fans, well those are the HD120 RGB fans that I have had sitting here begging for me to use them in a build and I can’t imagine a better build for them. Then the H100i v2 was actually to test CableMod’s AIO sleeving and they just happened to have a blue that matches the blue feet on the case. So you can expect to see coverage on that sleeving later this week! Oh, I almost forgot the memory, the G-Skill kit is just what I had on hand. I would actually prefer to go with something RGB that I could set to match this theme, but these are fast and should work for now.

So I started off by getting the motherboard prepped. This included installing the SSD on the back, the memory, and the CPU. Then before I could install it in the case I also had to put the Corsair mounting bracket on because you don’t have access to the back with this case. The hardest part with that was getting the pre-installed Intel bracket off and figuring out that it actually comes with both an AMD and AM4 kit, I set everything up with the AMD kit then found the screws for AM4 that hold the backplate in place correctly. Then from there, I installed the four motherboard standoffs, seriously why aren’t these pre-installed it isn’t like you are going to use any other board size. Then attach the board. Look at how small it looks in the case! 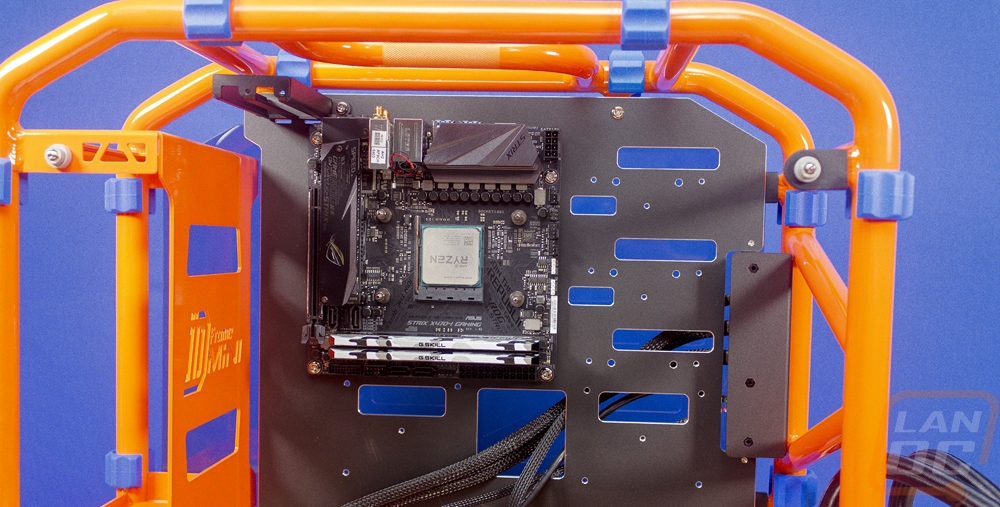 Next, I installed the HD120 RGB fans into the bracket and then mounted the radiator using the included long screws that came with the AIO. Mounting this out of the case is much easier. Then once you are done you just line it up and screw in the two screws on the bracket. I do highly recommend that you think a lot about where you run your fan wires before doing all of this. There are holes in the sides they should run out, but you have to have the fans orientated a specific way to get it to work. Once the radiator and fans are mounted you just have to mount the pump and block to the CPU. Because we already have the mounts installed it is just four big thumbscrews nuts, the thermal paste is pre-installed. 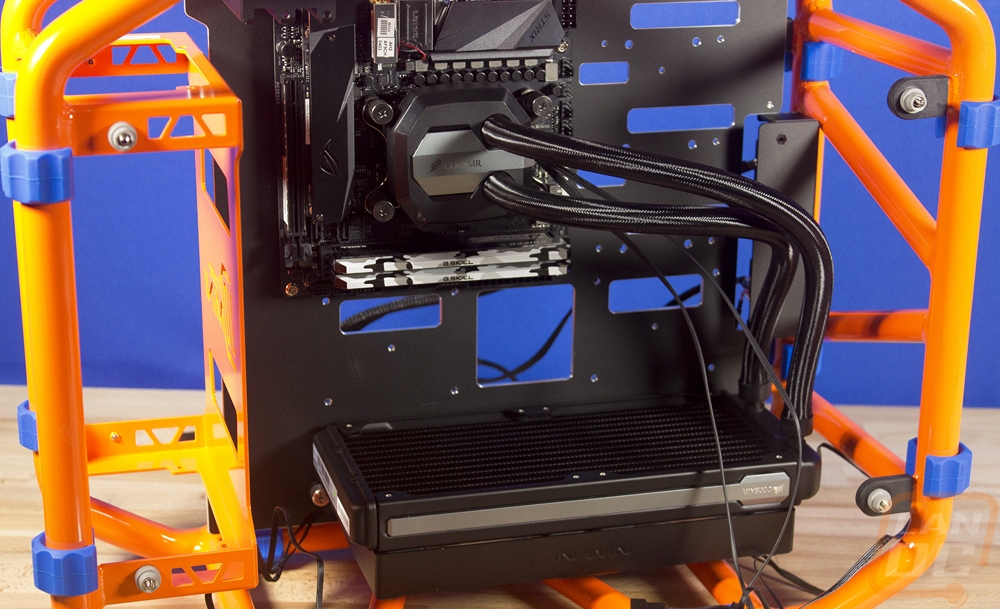 Now, remember this isn’t one of those new-fangled cases with wire management tracks down the back, a mile between the backplate and the side panel, and a hidden PSU. You have an open-air PSU that can be seen from anywhere, VERY little space between the backplate and the side panel window, not to mention it is glass so everyone is going to laugh at all of your bad wiring. Sit back and take the time to plan out how you want to run things in your mind. Then pick a section of wires to start. I did the front panel connections, got those all routed and cleaned up before even installing the PSU wires. Then I did the PSU and last the fans. I used a lot of zip ties to keep things tight and I also used a few of the included wire loops. Those were nice because they also show you how thick you can go. I ended up getting my wiring cleaner than my last build, I don’t have to bend the glass to put it on. But I think mostly that was because I had worked in this case before. Don’t be afraid to clip all of your ties and start over again if it doesn’t look good or you don’t think the window will go on. 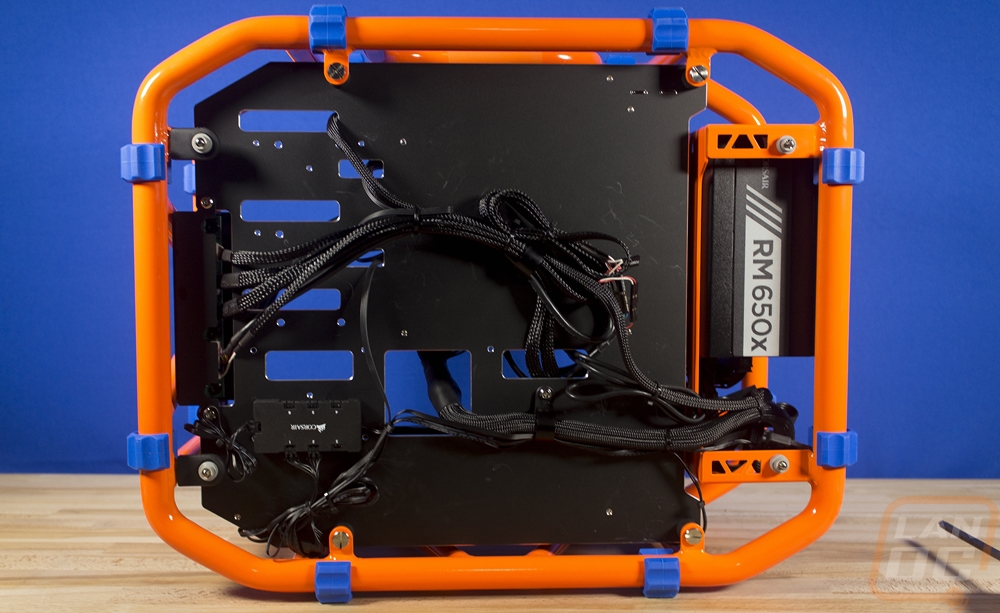 The Corsair lighting controller fits perfectly in the thin space and unlike our old build where the Swiftech adapter had the wires facing up into the glass, this one has side plugs. I then had to find a place to put the controller. I ended up going with on the side of the front I/O for easy access. 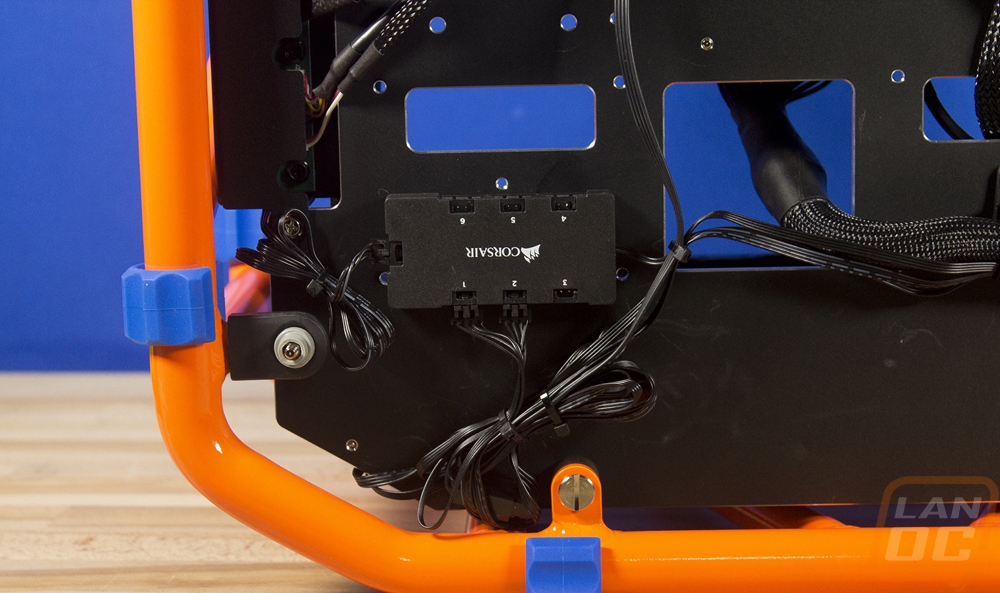 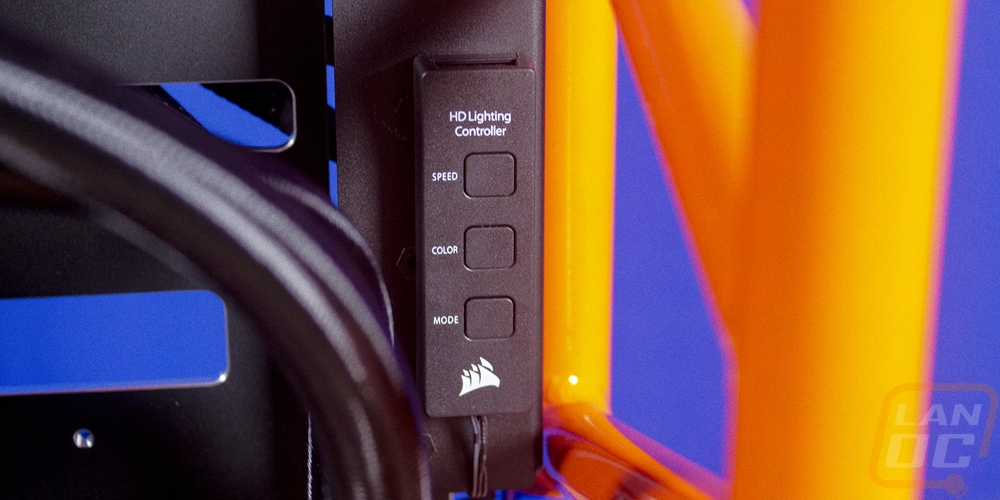 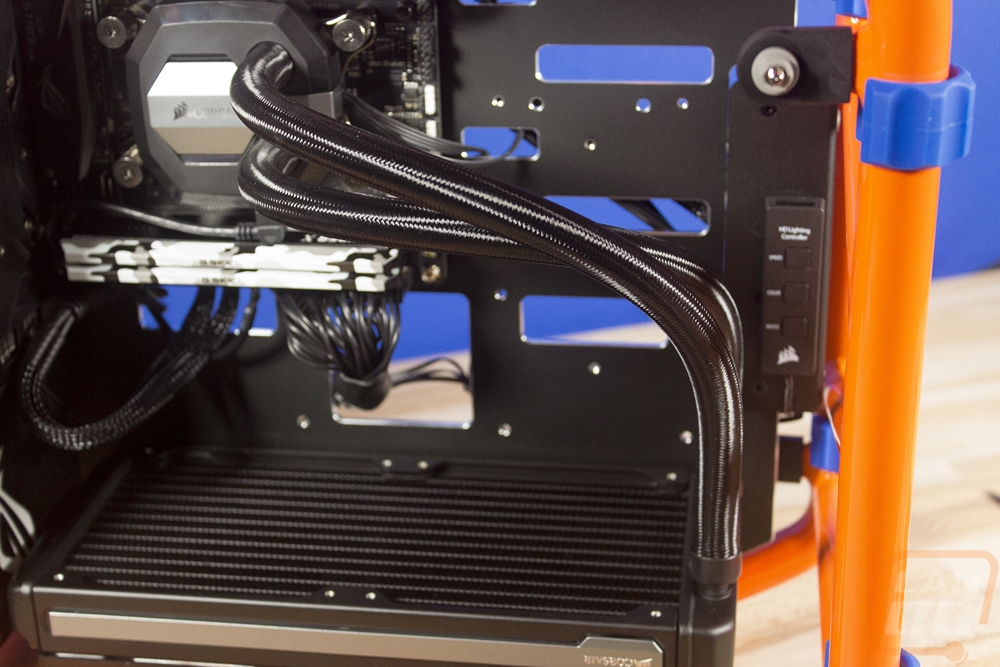 Now that Corsair H100i v2 did give me one big issue with the Asus X470-I Strix. The memory DIMMs are on the bottom and that is also where the USB plug for the AIO is. Well, the fit between the two was EXTREMELY tight. I honestly shouldn’t have done it, but I got it to fit by loosening the pump a little to move it all the way up and then manhandling the top stick of ram. I don’t know why Corsair has an extra rubber bump on the right angle, I may go in later and shave that off. That said, the build all together looks good! I also have a preview of the look with the CableMod AIO sleeving as well. 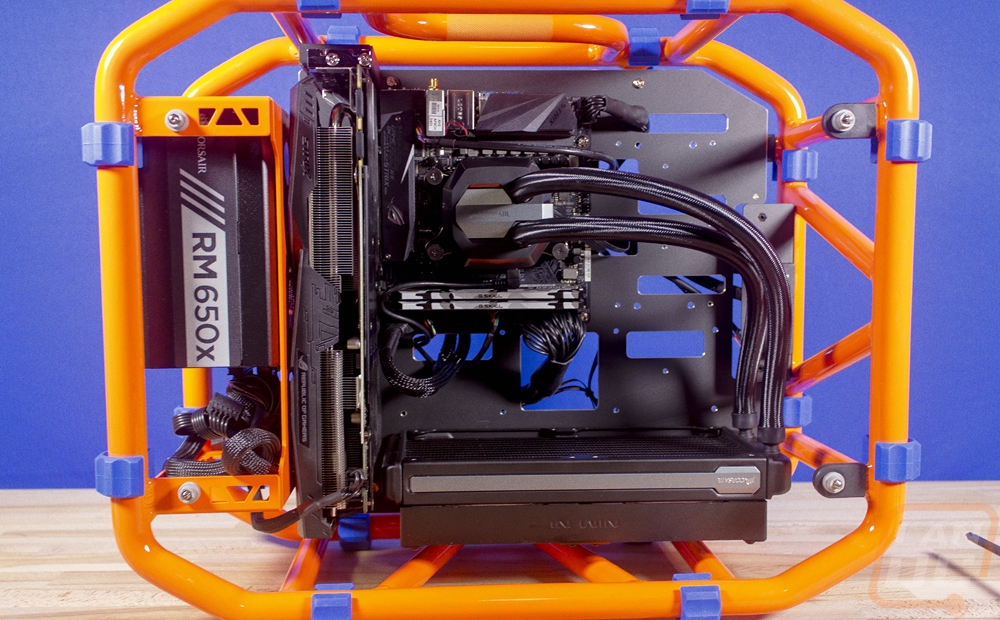 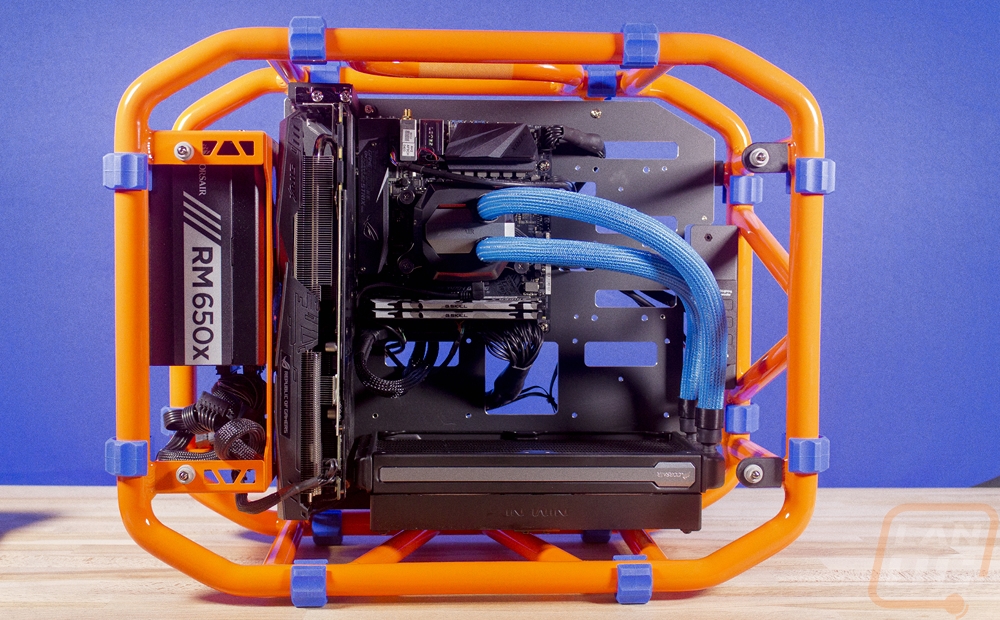 Now the orange powder coating doesn’t seem to be as durable as the blacks finish. I also noticed that up under the tubes on this case, especially around the PSU mount, they didn’t get a full coat of powder coat as well. I don’t know if it is a fluke with our sample, but I will have to be extra careful in the future. I chipped under the radiator without even knowing it sometime during the build.

Then we have the completed pictures as well. The back glass went on perfectly and didn’t require any extra work. That alone is a huge milestone for the wiring on this build. I still don’t like the exposed wiring coming out of the PSU, I may have to make covers for that in the future. But beyond that the orange and blue really looks good. Especially when the case is lit up a little with the lighting on those fans, the AIO, video card, and motherboard. 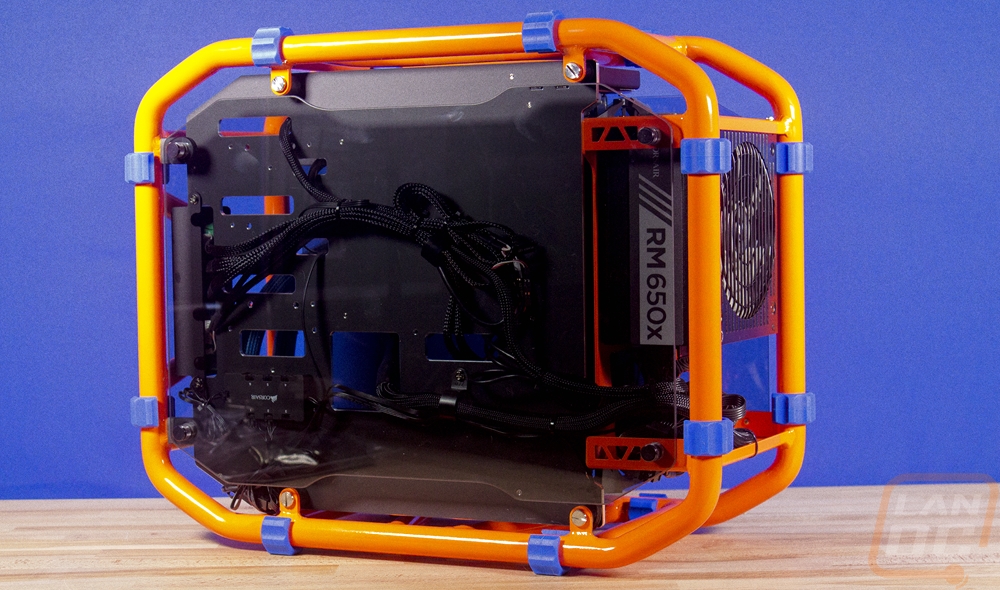 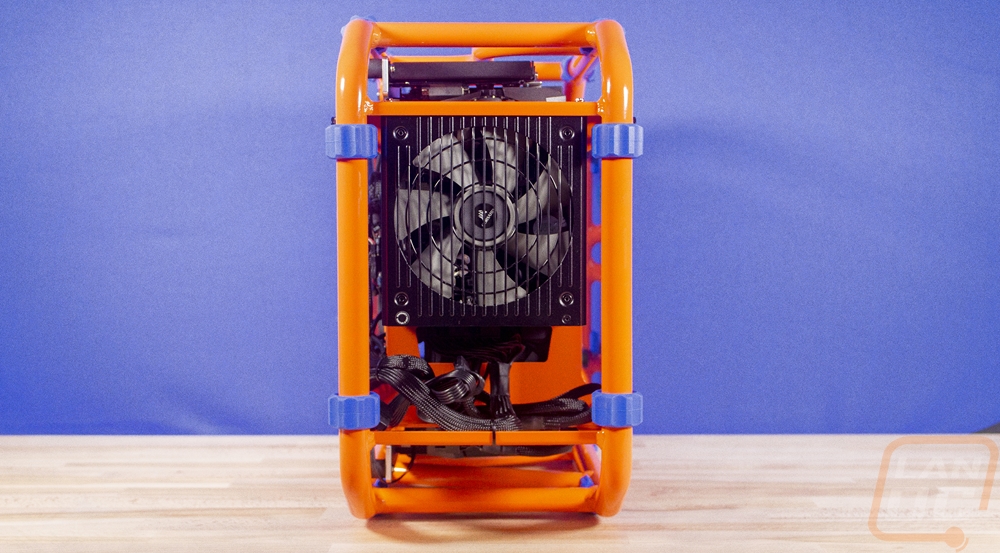 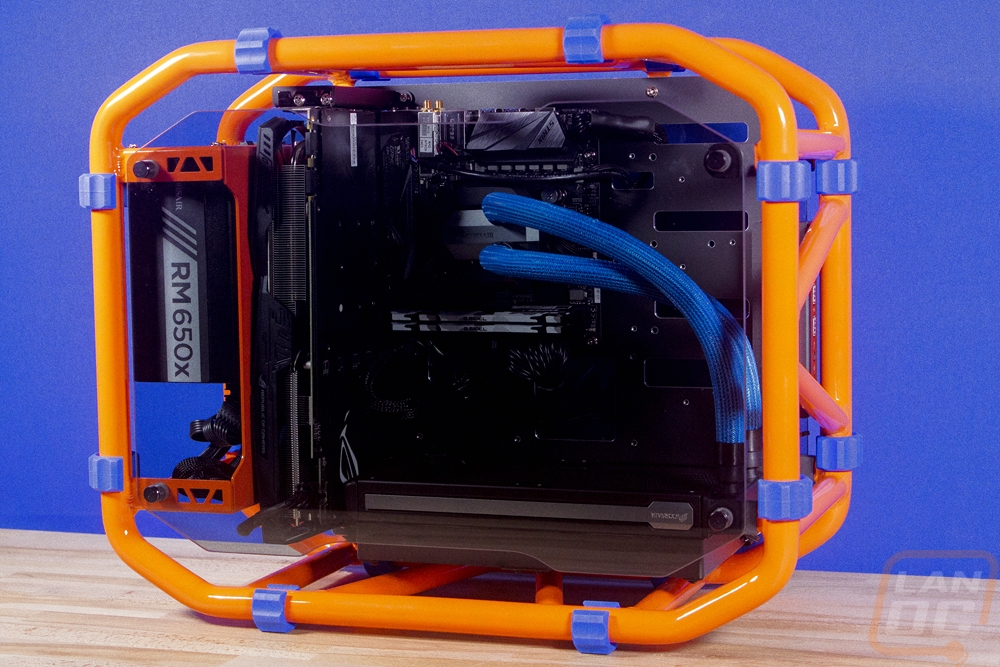 Discuss this article
Log in to comment
Posts in discussion: Revisiting the In Win D-Frame Mini 4 years later

We have 1534 guests and one member online