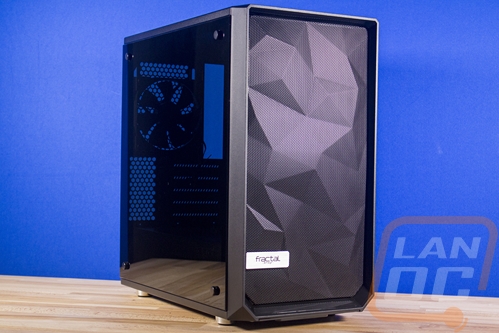 Unlike the original Meshify C, the Mini doesn’t have a model with and without the tempered glass side panel. Fractal went with a tempered glass side panel on the left side by default. It takes up the full side panel and is a little thicker than the side so if you look closely they have beveled the edge to help it meet up on the edges. It is attached with four thumbscrews with rubber washers that keep the panel from being damaged. Tempered glass gives the case a little more longevity because a standard side panel will eventually start to get scratched up, not to mention the additional reflectiveness of the panel. This, of course, makes it a LOT harder to get photos of for me, but I think its worth it in the end. The panel has a tint by default but Fractal also painted the edge on the inside to make sure to hide any of the weird areas that the panel goes over metal framing and mounting. 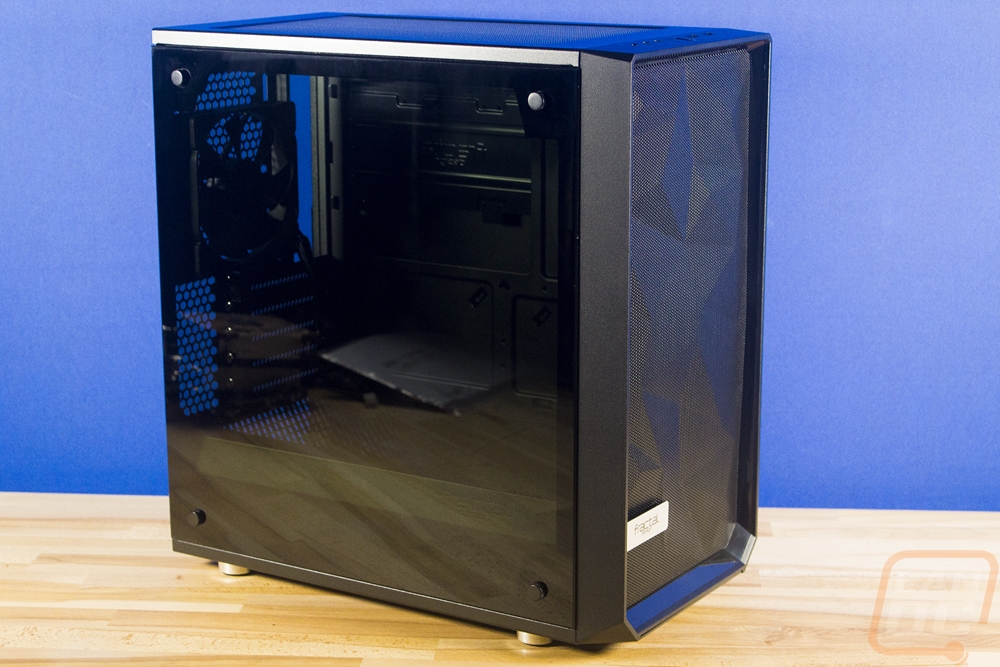 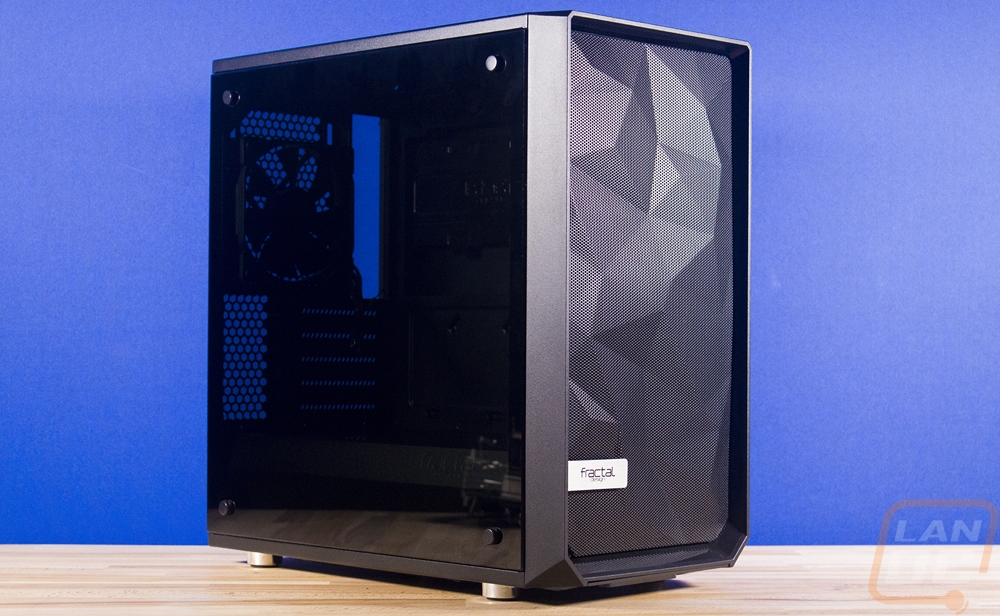 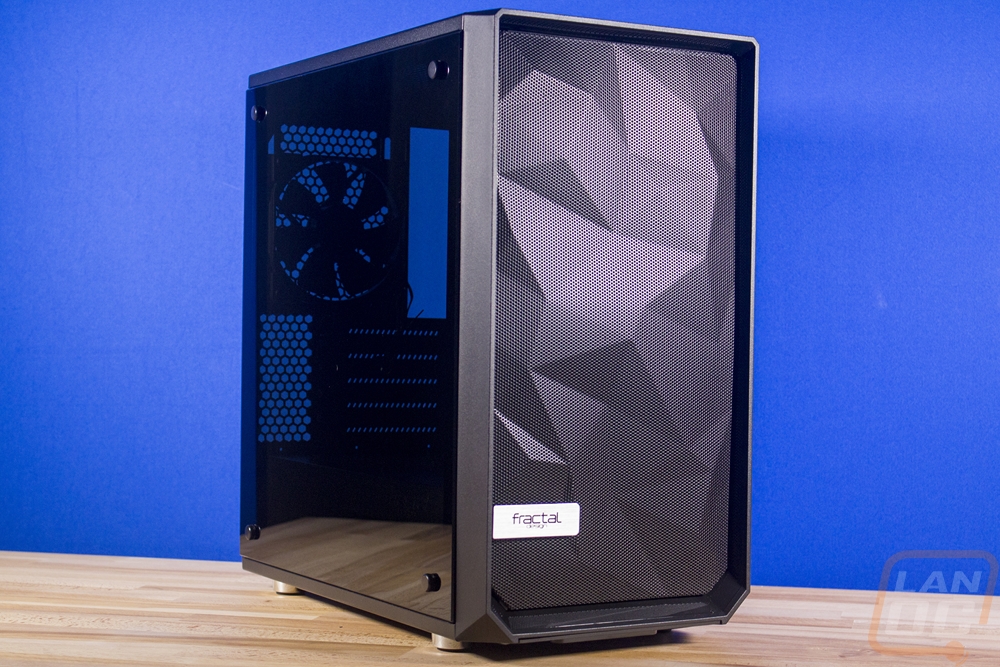 Let's be honest, the main thing different about the Meshify C Mini is the front of the case. Unlike in the past where Fractal would have solid front panels that limit airflow but help keep noise levels under control. They went with a full mesh front panel. But in a truly Fractal way, they managed to do what everyone else has been doing forever and make it completely unique by adding 3-dimensional angular design to the mesh. It is just enough style to make the Meshify stand out without being over the top. Also on the front panel is a brushed aluminum Fractal Design nameplate but to get it to work they had to angle the mount so that it would be flat, a nice touch. 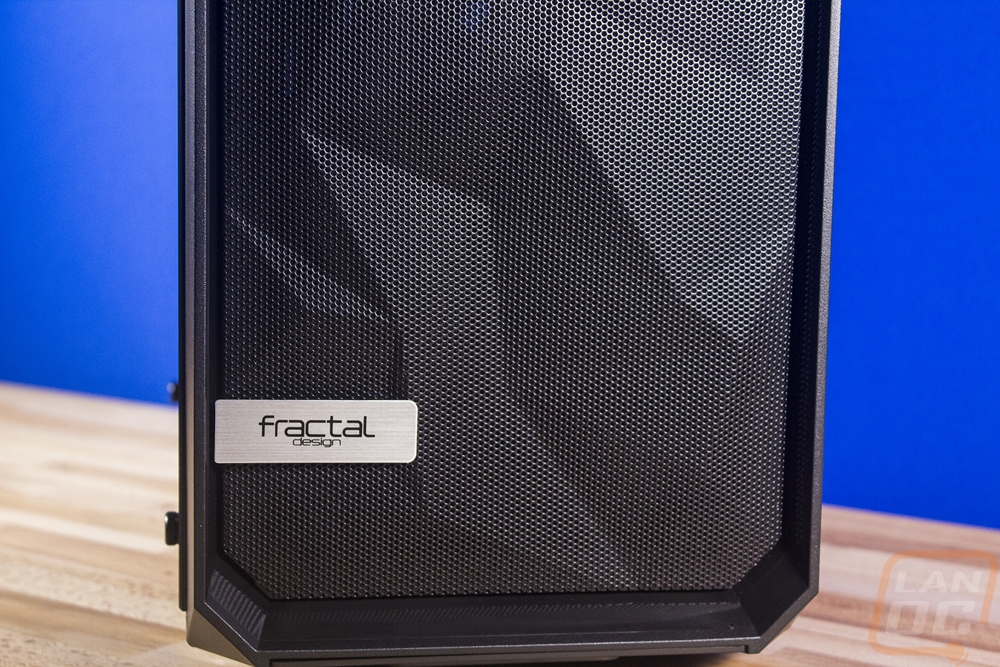 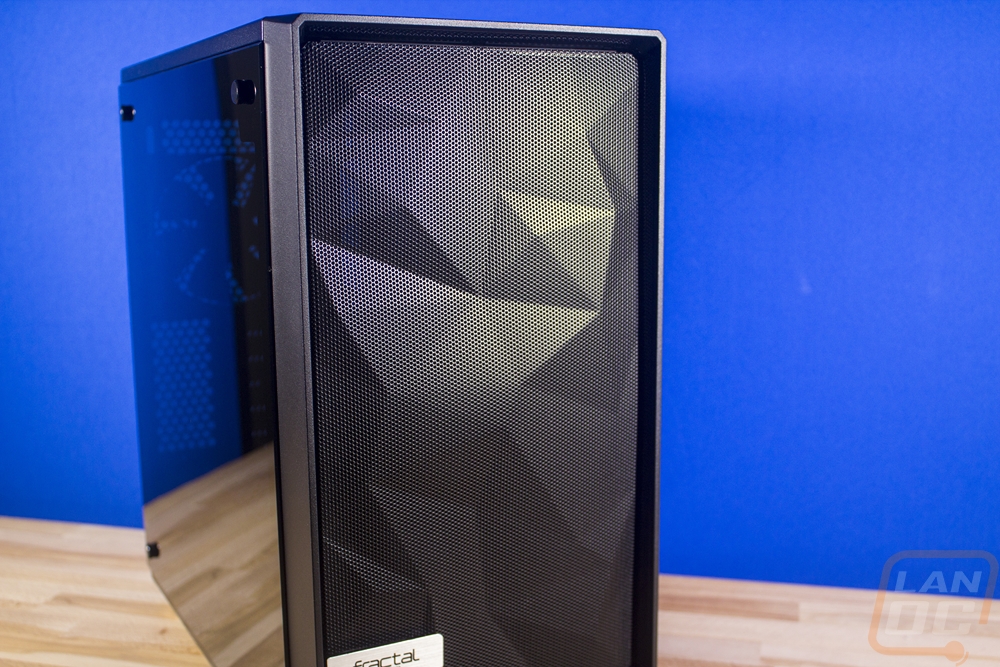 The top is also mesh, but not the same angular design. The top mesh is actually a removable magnetic filter over top of larger perforated holes with mounting slots for fans to allow adjustment. It should also be noted that the slots are as far over as they can be to keep any fans or radiators away from the motherboard for clearance. Also on top, up at the front edge, is the front I/O panel. You get two gold-plated USB 3.0 connections, I’m a little surprised they didn’t include USB Type C as well. Then over on the other side, you get audio and microphone front panel connection. On the far left the reset button kind of blends in with the audio jacks. Then in the middle is a square power button. I don’t really like the power button very much, an aluminum button or similar with a solid feel would be a big improvement here. 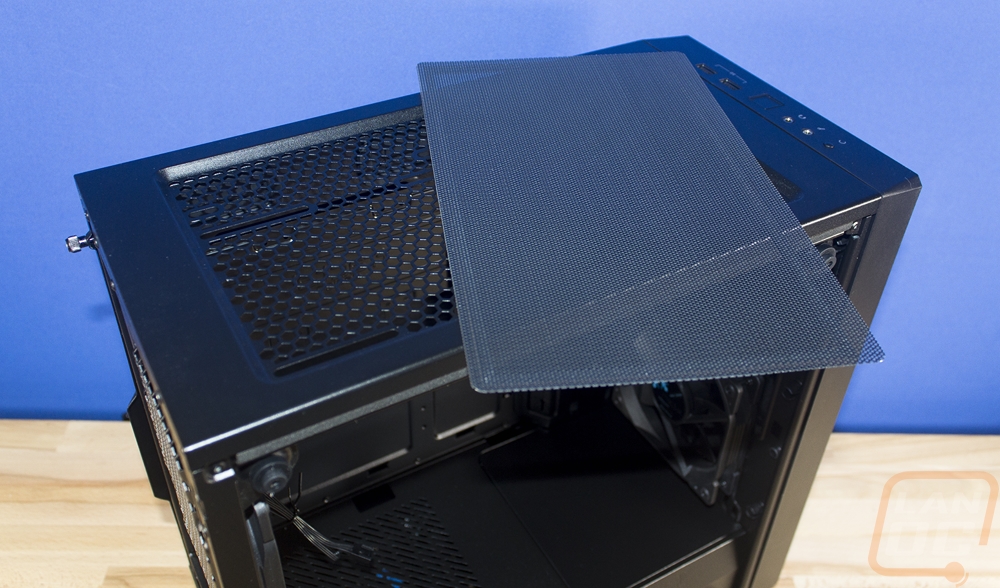 Now the right side of the case has nothing special going on. This is the back side of the motherboard so Fractal used a standard steel panel to hide any of our bad wiring. 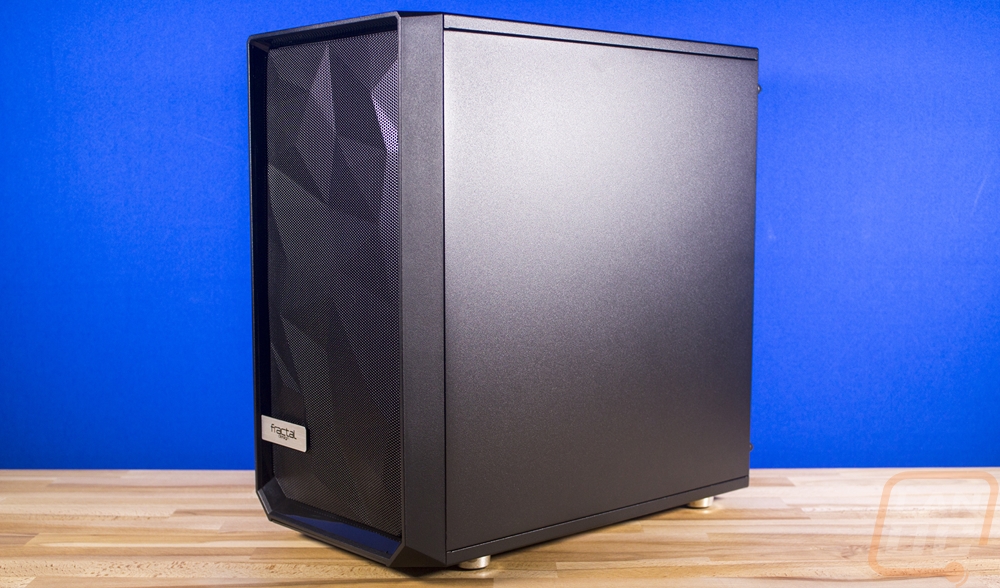 Around on the back of the case, the Meshify C Mini has a mostly normal configuration. You have a rear fan mount next to the rear I/O but it has slotted mounts for the fan that gives about an inch of movement up and down to help depending on your setup. There is ventilation next to the PCI brackets as well as vented brackets. Being a Micro-ATX case there are five brackets in total. Then down at the bottom is the power supply bracket. Rather than an internally installed PSU, you remove this bracket and then can install it through the hole. The bracket has two thumbscrews attached for quick installation and removal and then it has four screw holes to be attached to the PSU itself. 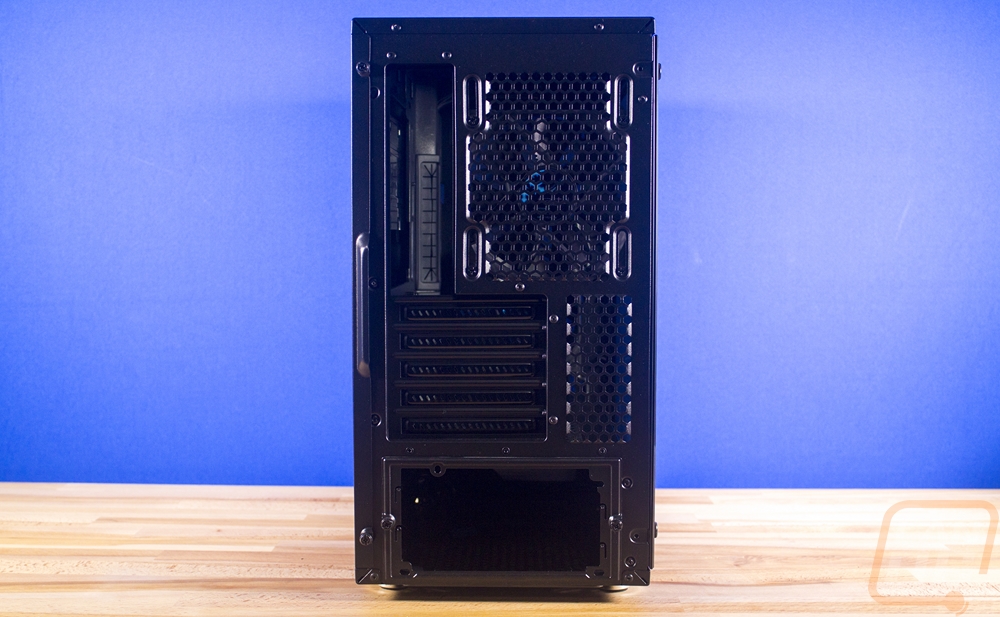 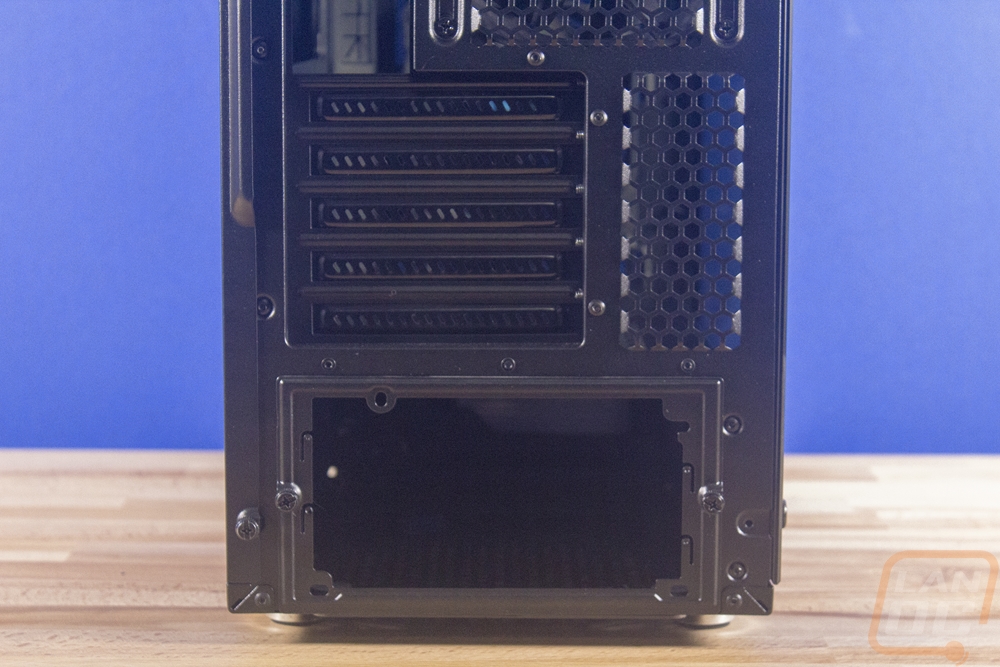 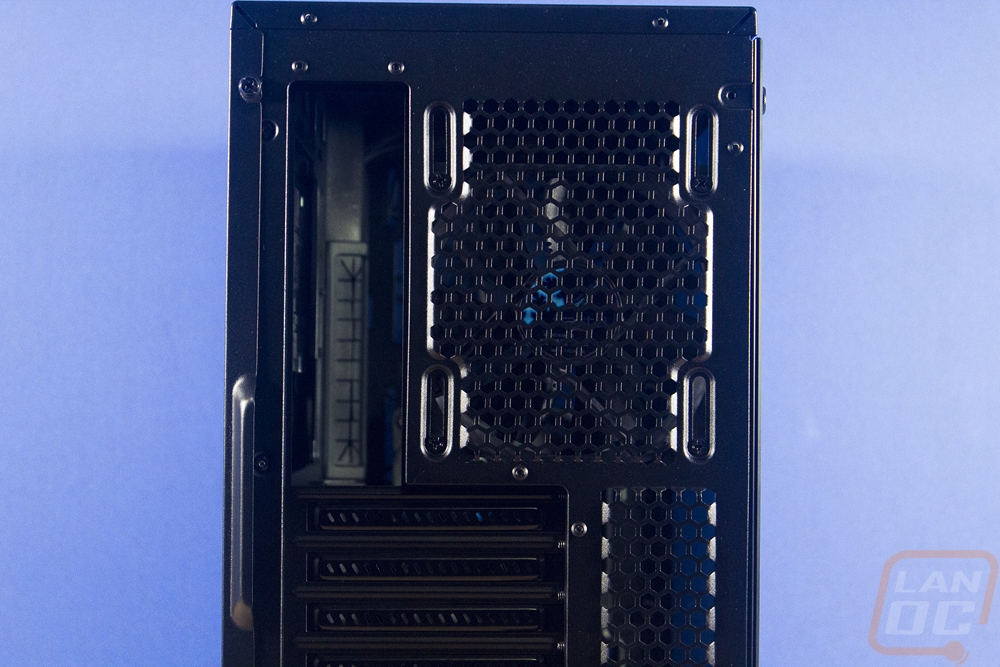 Last but not least we have the bottom of the case. The two big things going on here are the feet and the fan filter. The four case feet have a nice custom look with their polished finish with large rubber feet on the bottom. Then the fan filter runs the full length of the case and has a handle on the front side. This way you can remove the filter for cleaning without having to pick the case up. 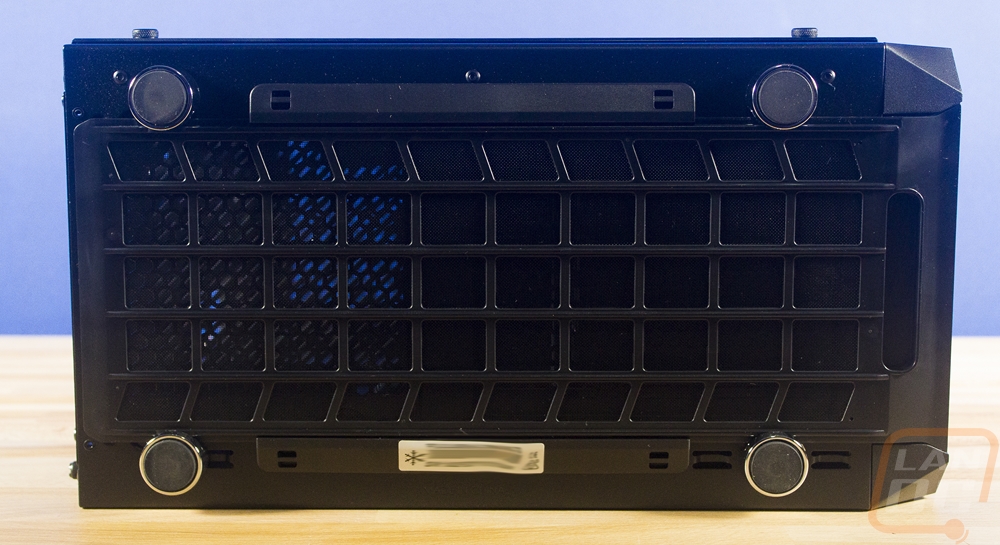 We have 1968 guests and one member online