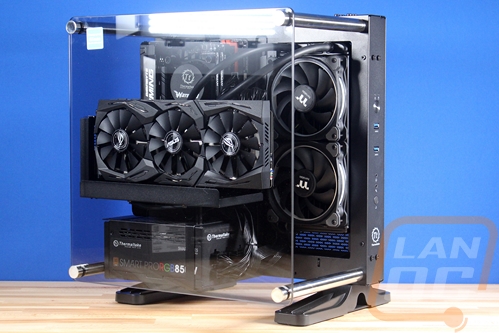 So while the Core P3 and P5 are both great cases, I personally think the Core P1 is the best of the whole series. The other cases end up being huge but the Core P1 with its micro-ITX form factor is able to save a little space while keeping a lot of the same features that are great with the others. You get a really unique design that takes a lot from the Level 10 from years ago and combines it with some of today's trends. You get an open design that really allows you to show off your build to the fullest. Of course, this also means that you have to take extra care in planning out your build. Just tossing random components in this one isn’t going to look very good and there is no room to hide bad wiring. Really I think this, like the P3 and P5, is begging for custom water cooling but even just with an AIO with a set of nice fans, it looks good. I’m actually planning a really crazy build in this one in the near future so keep an eye out for the project build in the future.

When the Core P1 first came in I didn’t even know that it having a tempered glass window included was a big deal. It was later when looking at P3’s for a friend that I found out that a lot of the P3’s and P5s don’t come with tempered glass unless you get the glass models, you have to buy it individually and upgrade. So Thermaltake including the glass with the P1 is a nice touch, without it this case wouldn’t be what it is.  The customization that you have is also a big selling point for me, even with how you can mount your video card. Beyond that, they included mounting for pumps and reservoirs or you can use the space to mount SSDs right in the front to show them off. I don’t think any two Core P1’s is going to look the same.

Now there are downsides as well. For starters, this is a very heavy case given the ITX form factor. Without anything in or on the case, it weighs 21 pounds, a fully decked out rig is most likely going to be pushing 40-50, especially if you have water cooling. I also wasn’t a fan at all of the big plastic feet, they take up more space than I would like and more importantly they are the only part of the case that doesn’t have a high-quality look or feel. They do their job very well, but I would love to see someone come up with another design. You also have to keep in mind that the open design of this case is going to mean more maintenance. You will need to clean dust and dirt out more often as there is nothing to stop it from getting inside, if you even consider there to be an inside to the case. I didn’t list it in the cons, but I would also keep an eye out on the PCI riser as well, apparently, on the P3 and P5 they were known to be bad but for our sample at least I had no problems.

Even with the downsides in mind, I do love this case and I’m not the only one. Months ago after I had arranged the Core P1 to be coming in and after I planned on using it for a project build to build my wife a new PC she was browsing Facebook and saw a picture of this amazing case that she just had to have. That case was the Core P1, she picked it out blindly after I had already arranged everything. It is a stunning case, especially when you use it to feature something crazy. With all that in mind, the $99.99 price point that you can pick it up for ends up being a little bit of a deal. It isn’t a budget case of course, but with a tinted tempered glass window and the overall construction, it was cheaper than I expected it to be. 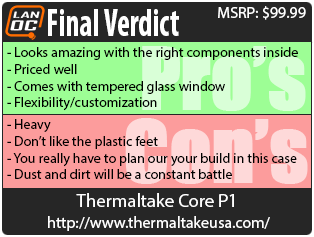 You might call him obsessed or just a hardcore geek. Wes's obsession with gaming hardware and gadgets isn't anything new, he could be found taking things apart even as a child. When not poking around in PC's he can be found playing League of Legends, Awesomenauts, or Civilization 5 or watching a wide variety of TV shows and Movies. A car guy at heart, the same things that draw him into tweaking cars apply when building good looking fast computers. If you are interested in writing for Wes here at LanOC you can reach out to him directly using our contact form.
Discuss this article
Log in to comment
Posts in discussion: Thermaltake Core P1