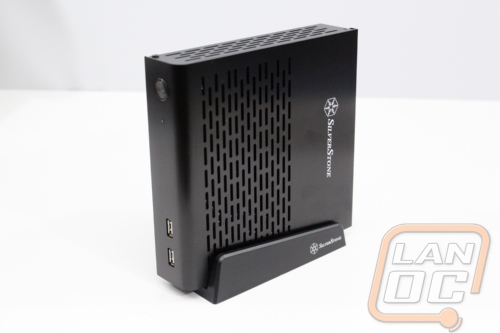 When it comes to small form factor builds our main focus has been on builds that can fit high powered video cards for LAN use. But the truth to the matter is there are a lot more people who are looking to build small PCs for routers, HTPCs, and just to save room on your desk. As someone who has HTPCs all around the house I completely get it. After juggling a few parts around I realized I had a half height Mini-ITX motherboard sitting around and I decided to make use of it. I came across the Silverstone Petit PT13 case and the AR04 cooler from Silverstone as well. Together they should make for a small but powerful PC, let’s see how performs.

The Petite PT13 really shows its size the second you get a look at the packaging it comes in. This is by far the smallest cases box I have ever seen. Honestly this isn’t much larger than the standard sized accessories box that you would find inside of a standard case. The box itself is simple and to the point with a cardboard colored box and black artwork on top. You have a line drawing of the case on the cover and next to that image Silverstone included a couple notes about its compatibility and its size (1.4 liters). On the sie there is a full specification listing, this in my opinion is very important on a case this size. You wouldn’t want to get home and find out your hard drive or motherboard isn’t going to fit on any case, but on the PT13 the odds of parts not fitting are much higher than normal. 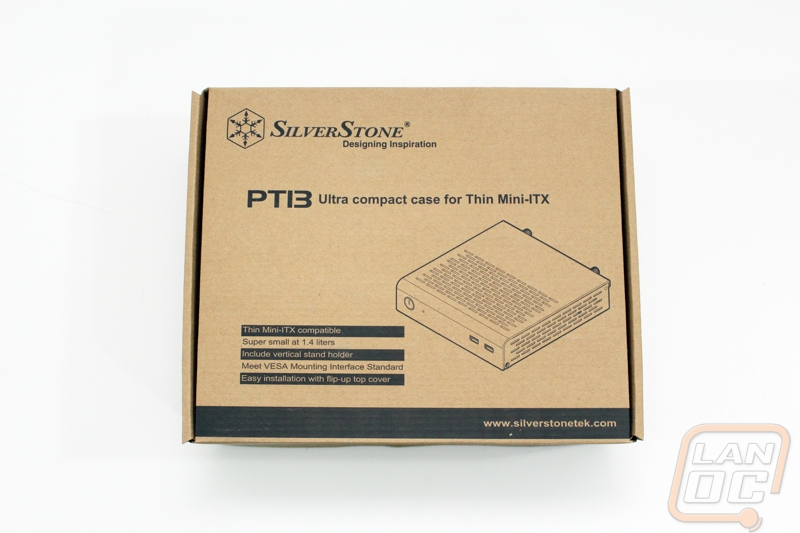 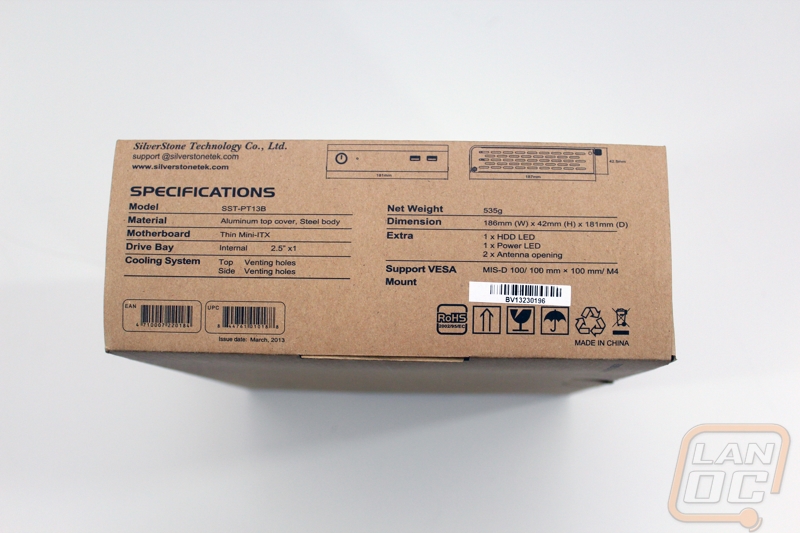 Inside the box, other than the case itself, you do get a few accessories. First the case does come with a stand to stand the PT13 on end should you need to. You also get two brackets that allow you to mount it directly to the VESA mount on the back of your monitor or television to completely hide the case. Silverstone included a small bag of screws with your motherboard, hard drive, and VESA screws. They also include the rubber feat that go on the bottom of the case for people who plan on laying it flat on your table or under your television. 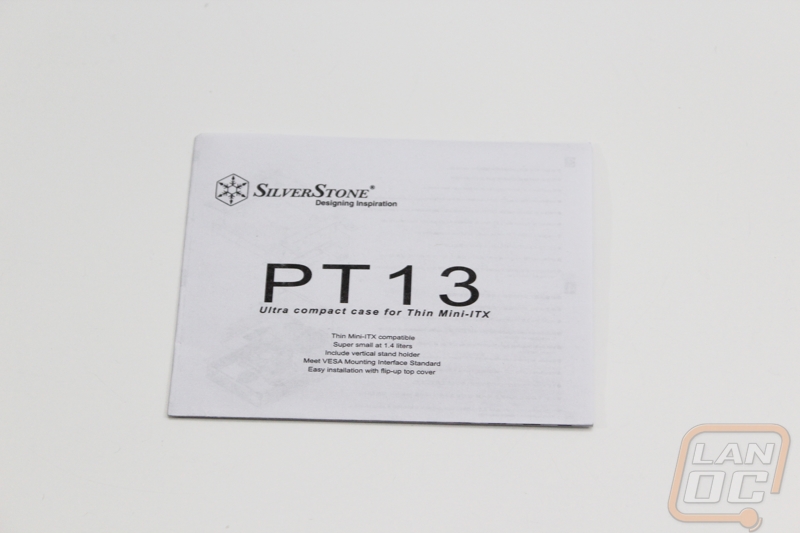 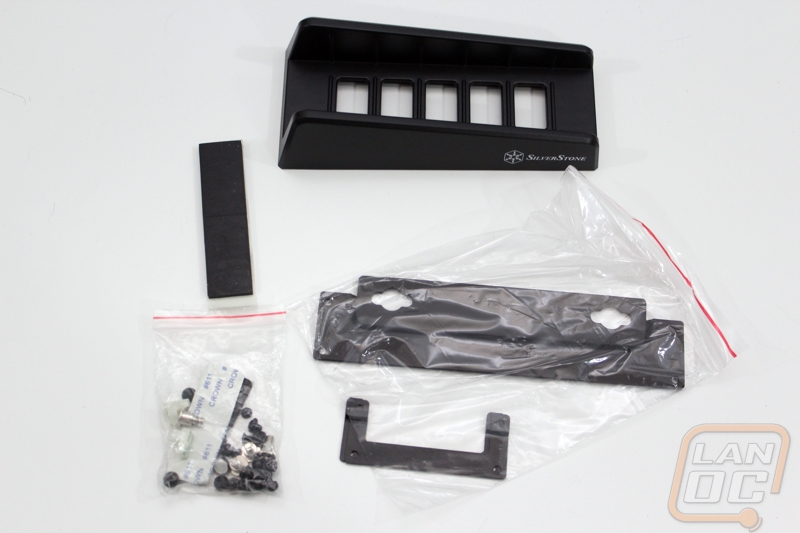 The AR04 has a little more color than the PT13 in its packaging. This time you get a blue on blue box. On the top you have a photo of the heatsink along with a few of the heatsink’s features as well as what CPUs it supports. The box itself is extremely small, showing off how small the heatsink really is. Inside there is a small piece of padding covering everything up and keeping things tight to prevent them from moving around. Under the padding you have a paper with the installation instructions on it and along with that a small packet of thermal paste. Of course you will also find the heatsink under the thermal paste and instructions as well. 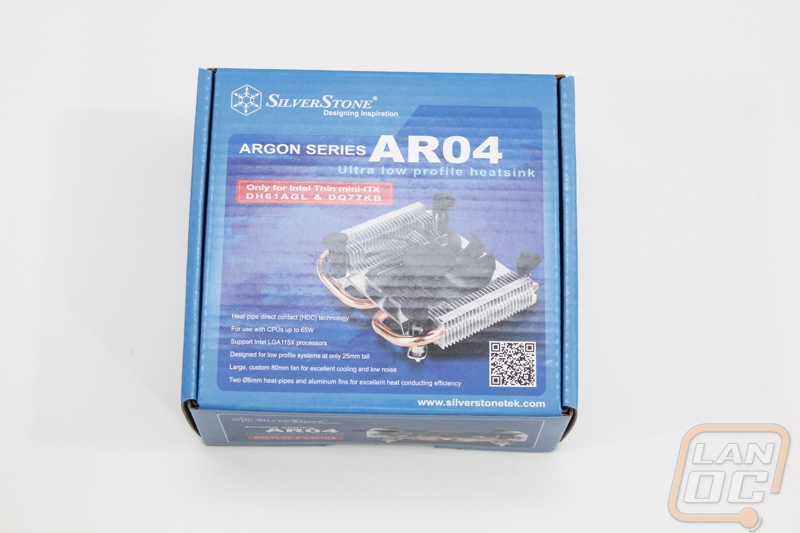 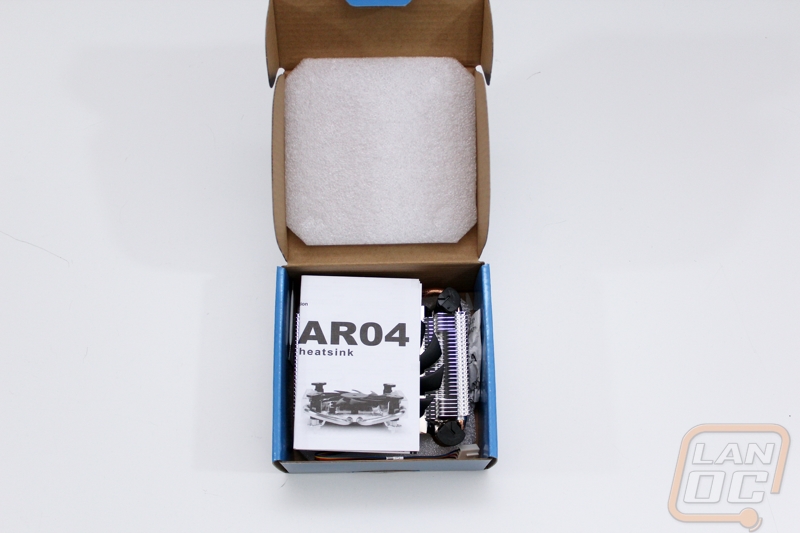 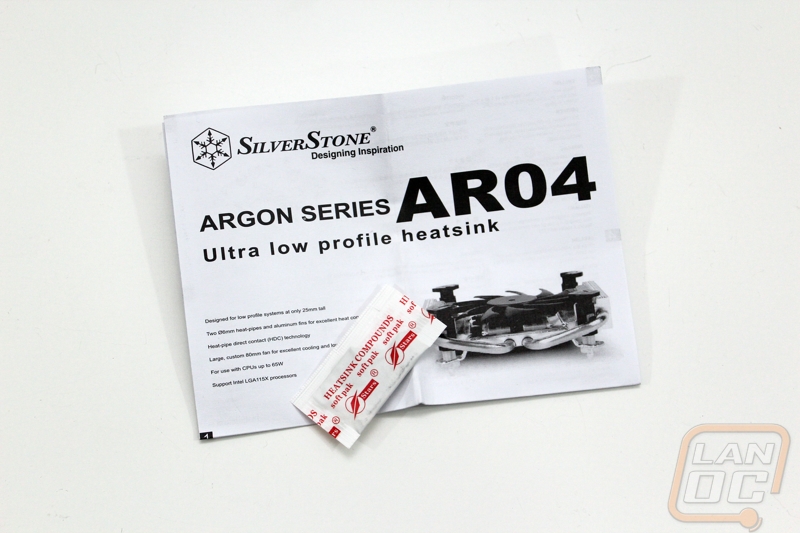 The best way I could describe the Petite PT13’s size would be close to the size of a standard DVD drive. The case is actually smaller in thickness but slightly wider on width, but overall it is close. Who would have thought years ago that we would be building PCs that small! The case is made of aluminum and has been anodized in black to give it a clean look. Silverstone did include their logo on the top as well, but beyond that there aren’t any other logos on the case. Both sides and the top of the case are covered in ventilation to help keep your build cool in such a small space. 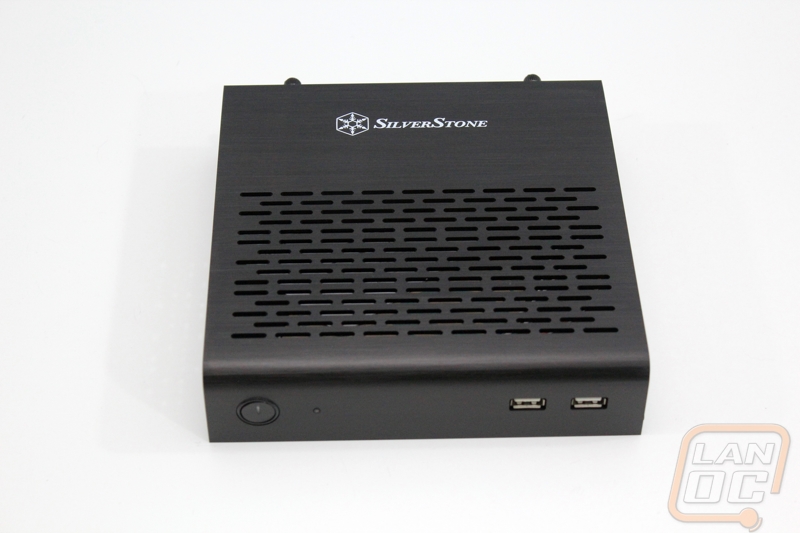 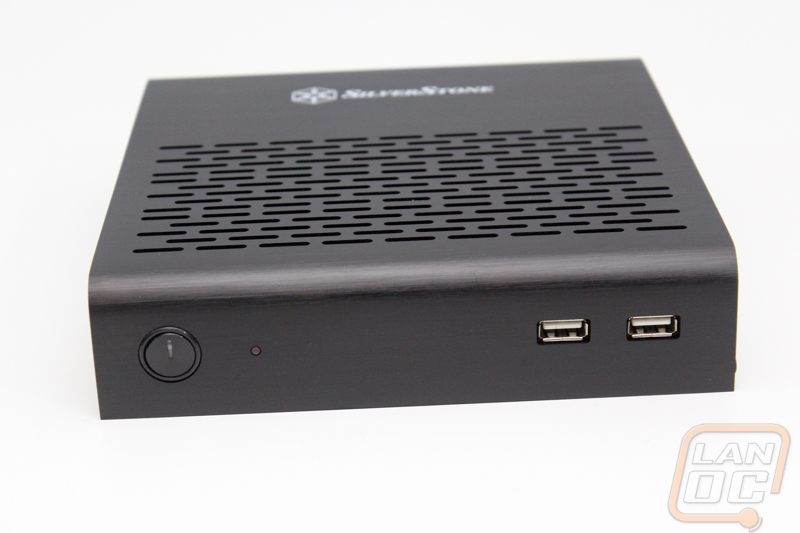 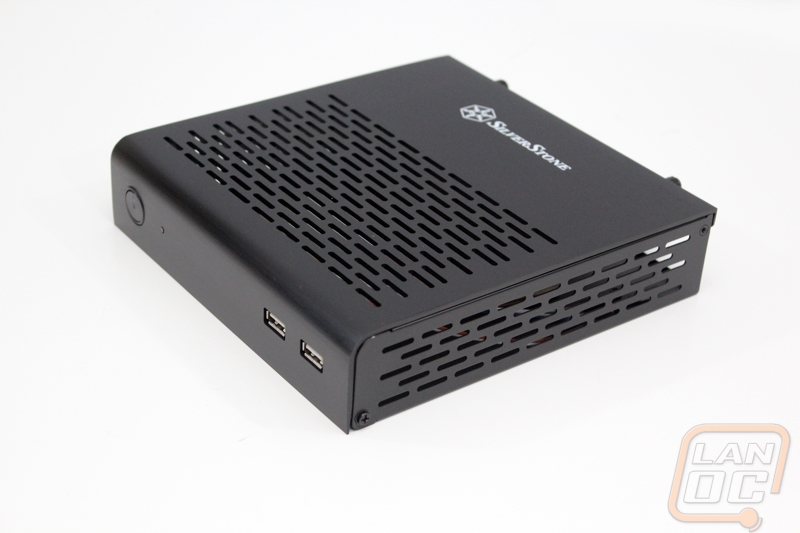 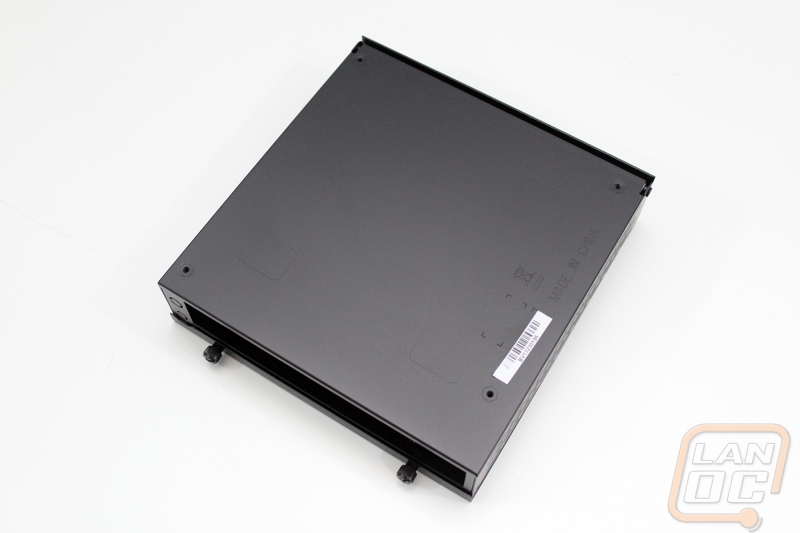 The front of the PT13 has two USB 2.0 ports, the power button, and a small LED. Really that is all you need on the front I/O panel. Around on the rear I/O panel you can see that the PT13 only supports motherboards that are half height. Next to the half-height I/O panel they also included two knockouts for wireless antenna mounts should you install a wireless card on your motherboard. Also back here we have two thumbnails that keep the top panel closed. When you remove them, the top panel pivots up but does not come off like a typical case door. 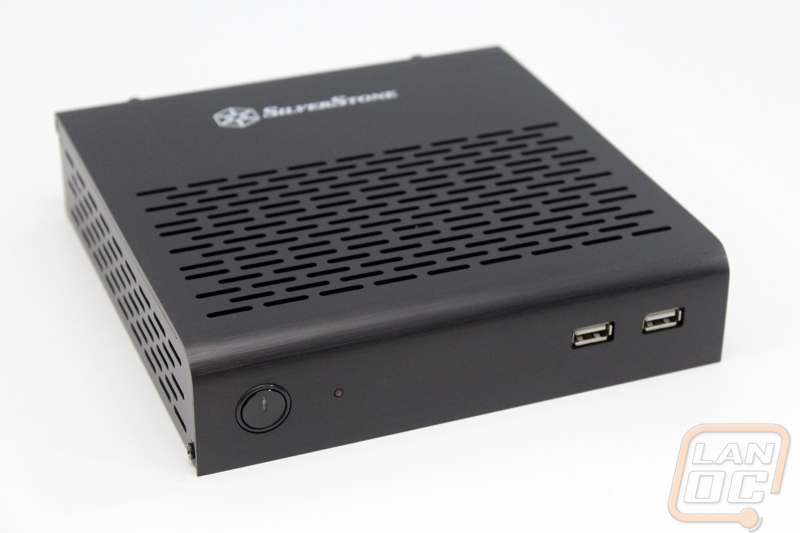 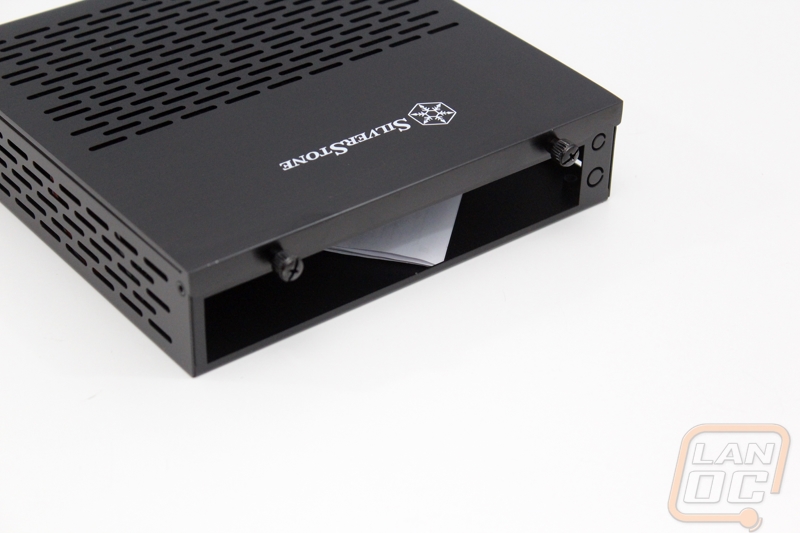 The stand that Silverstone includes with the case props the case up on its side without covering up very many of its ventilation holes. 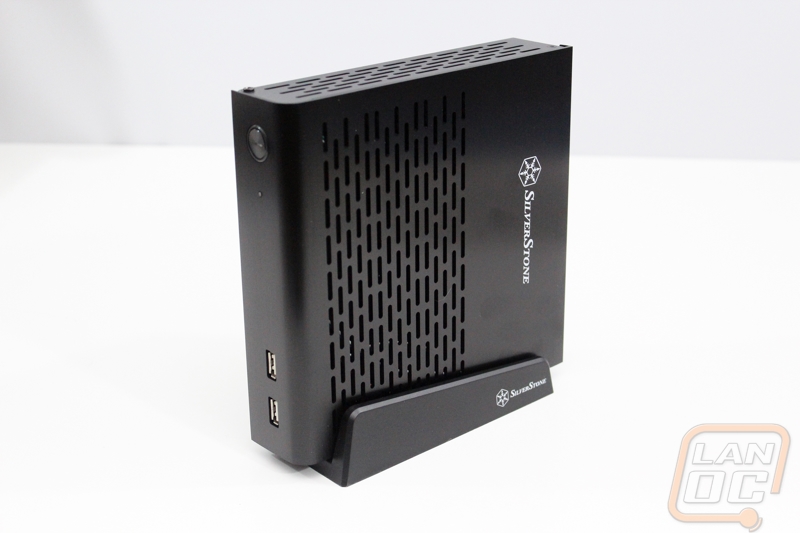 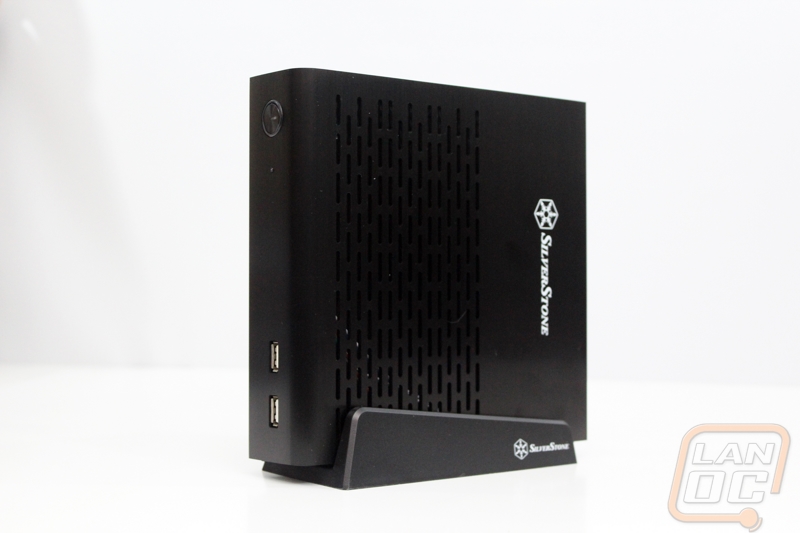 Typically a care review would have a full section just for the interior but let’s be honest, there isn’t enough room in the PT13 for too much to be going on. There are four standoffs for the motherboard to attach to along the bottom. On the front you can see the back PCB to the front connections. The front panel cables are extremely short at around 6 inches in length but they should be more than enough to reach the motherboard without having too much cable. You will notice that there isn’t a power supply mount, this is because builds going into the PT13 will be using an external power supply that will plug directly into the motherboard or you could use an adapter and one of the holes in the case for the wireless. 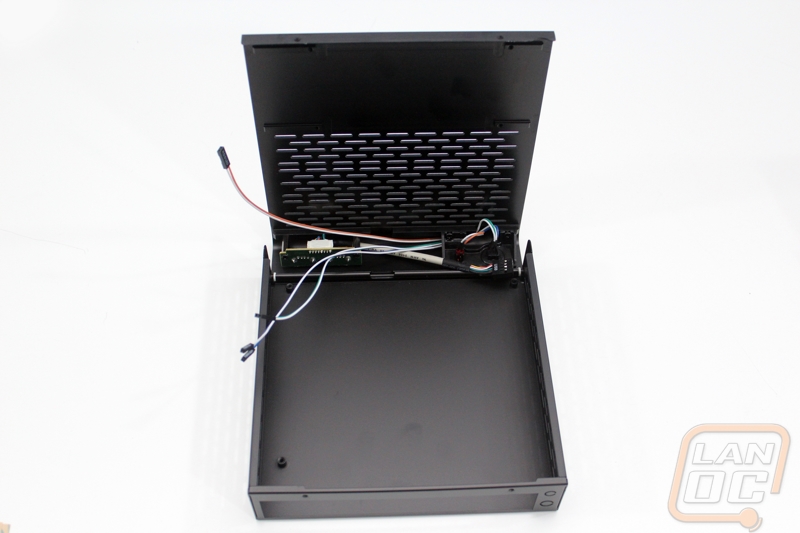 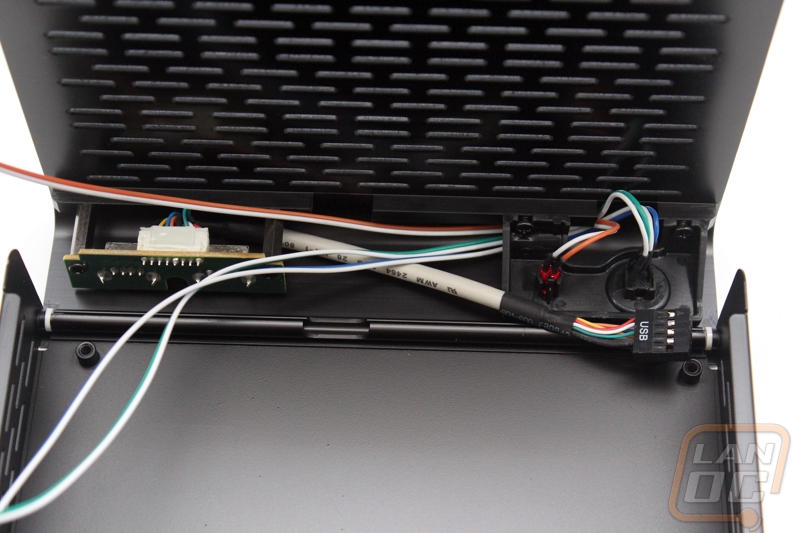 To give you an idea of how short the AR04 heatsink is. Take a close look at the Intel push pin mounts on each corner. The push pins are actually the highest part of the heatsink by a considerable amount. This means that with the push pins pushed down you could have something sitting on top of them and still have enough room for the fan to pull the air it needs to keep your CPU cool. The design itself is very simple. The fan design is similar to what we see on video cards and does now have an outer ring. The heatsink itself is very thin under the fan, with most of the surface area on each side. The fan blows down and also out over the outside area of the heatsink. To help pull the heat out Silverstone used two direct touch heatpipes that touch the CPU and pull some of the heat to the “meatier” part of the heatsink. 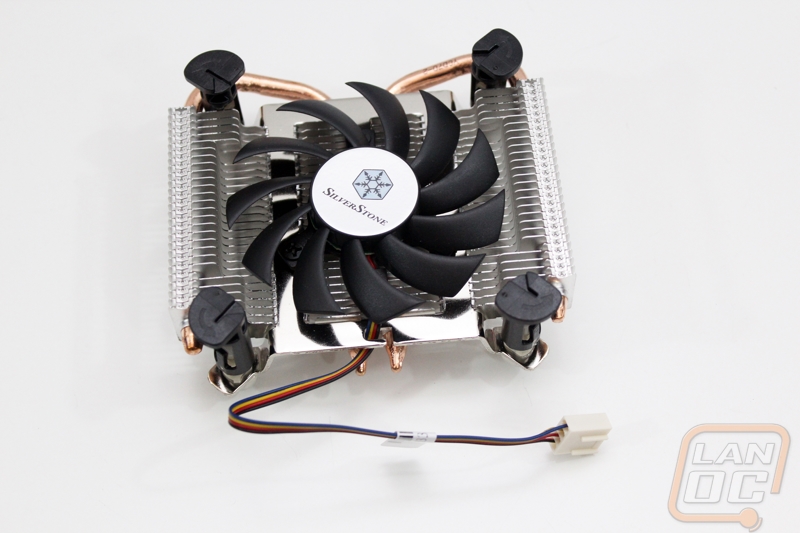 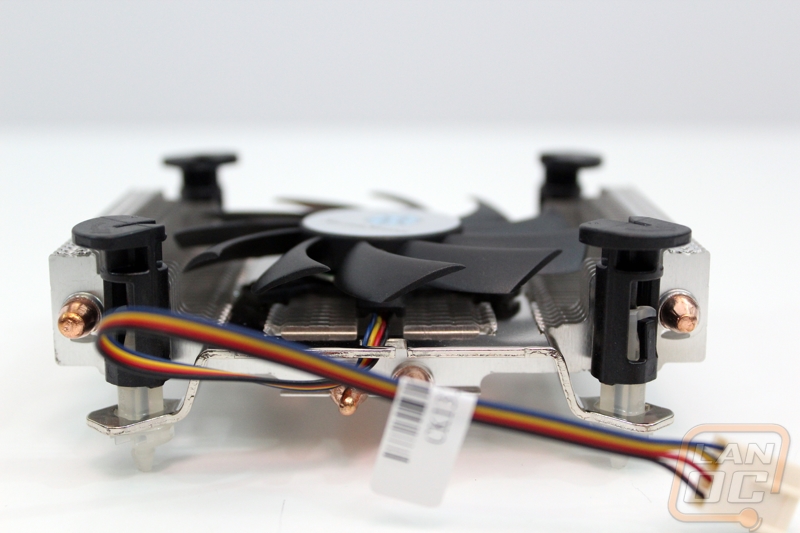 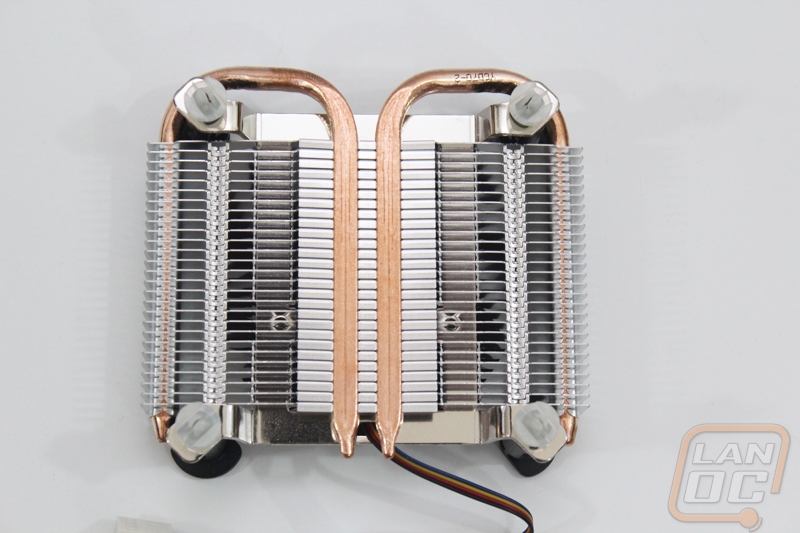 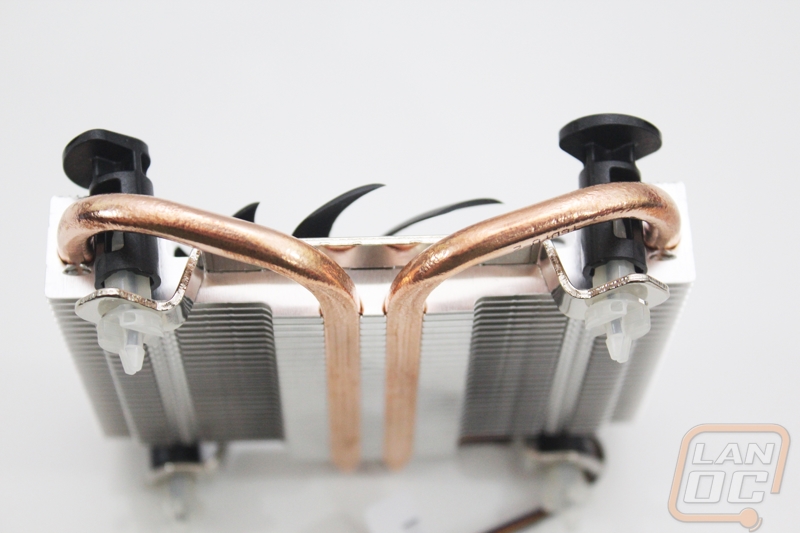 The installation into the PT13 really couldn’t be much simpler. Most of the build is actually outside of the case in this situation. Rather than use the included 2.5 inch hard drive mount that mounts to the top of the case, I uses an mSATA hard drive on the motherboard itself. Ram and CPU installations were standard of course. Installing the AR04 cooler was also very standard as it uses the plastic Intel push down clips that you would also see on a stock heatsink. Silverstone doesn’t provide very much thermal paste with the AR04 and with the direct touching heatpipes you will most likely need more than what they provided. Keep that in mind before you jump into the installation. With the heatsink and everything else installed, the only work I had to do in the case was installing the motherboard using four screws. After that I had to hook up the USB 2.0 cable for the front panel and then the three front panel cables. I didn’t have to worry about wire management other than keeping the cables away from the AR04s fan. 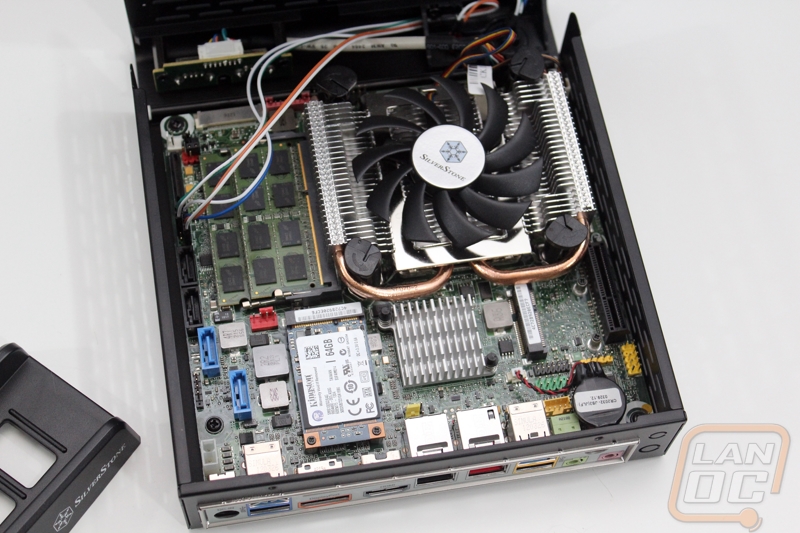 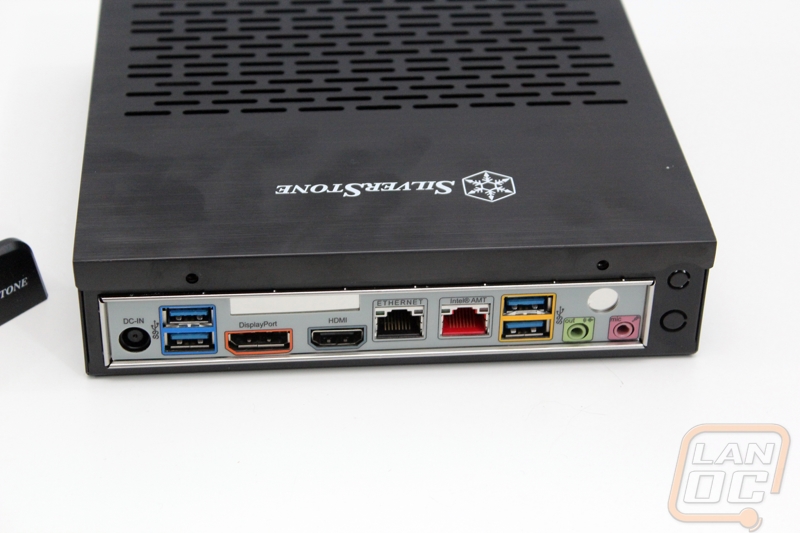 When it comes to performance, the PT13 and AR04 complement each other very well. The AR04 is able to pull cool air right in from the top of the case and then push it out of the vents on the sides. This does a great job of creating a little airflow in a case that otherwise doesn’t have any other fans. Because of the airflow the PC ran much cooler than I expected, even when under full load. With just a single fan having to do the cooling, especially considering its 80mm size, the fan speeds did run higher than I would prefer. That means the AR04 did create a little noise while in use. This is due to its small fan size and relatively high fan speed. Its lowest RPM is 1500 and when things warm up it will speed up to 3400 RPM. How often you have to worry about that will depend on what CPU you use, the 4770S is the fastest CPU that you can get within the recommended TDP limit of 65 watts.

Mini ITX builds have always been especially interesting to me. When I came across the PT13 and later the AR04 I was excited to build a PC with them, even without a specific use in mind. In the end a build using the pair would be perfect for an HTPC, router, or even just a small PC that takes up less room on your desk. That is because you aren’t limited in power where normally builds of this size are limited.

The PT13 might be simple but its all aluminum design does a great job of giving the case a little style. The only other styling is the ventilation holes on the sides and top of the case. Those holes also play a big role in keeping your PC cool because the PT13 doesn’t have a fan other than the CPU heatsink. This is where the AR04 comes in. The AR04 is designed to work with the PT13 and has to be one of the smallest heatsinks on the market. To give you an idea of its size, the plastic hold down clips are taller than the heatsink.

So what would I change with the PT13 combo? Well I would love to see USB 3.0 ports on the front of the case in the future with USB 3.0 being used more these days. I would also suggest you make sure your motherboard will fit in the PT13 as well. Its limited size and lack of PSU limits you just to a few motherboards. The AR04 also has a few small issues as well. First it is a little noisy due to its high fan speeds. I would have also liked to of seen a little more thermal paste be included with it.

All in all I don’t think there are a lot of other cases that will do what the PT13 and AR04 pair will. Not only are they extremely compact, but they also still support up to the 4770S assuming you have a Haswell motherboard. I think for now I will use my build as a new PFSense box here in the office, but if I get bored with that I can still move it over to be an HTPC or even a car computer. 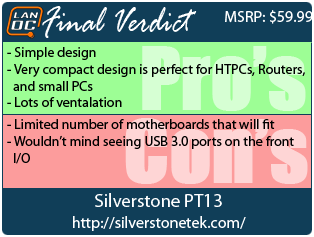 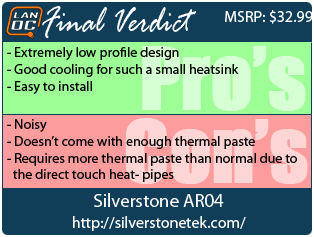 You might call him obsessed or just a hardcore geek. Wes's obsession with gaming hardware and gadgets isn't anything new, he could be found taking things apart even as a child. When not poking around in PC's he can be found playing League of Legends, Awesomenauts, or Civilization 5 or watching a wide variety of TV shows and Movies. A car guy at heart, the same things that draw him into tweaking cars apply when building good looking fast computers. If you are interested in writing for Wes here at LanOC you can reach out to him directly using our contact form.
Discuss this article
Log in to comment
Posts in discussion: Silverstone PT13 and AR04

We have 1664 guests and one member online