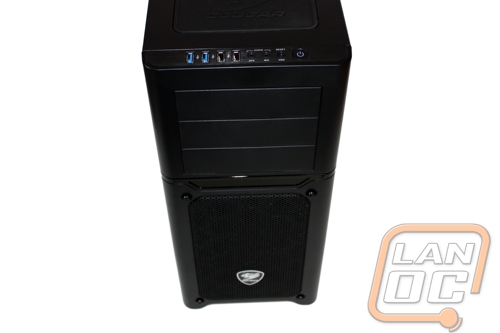 Cases are defined more by their price point than by anything else and the MX500’s MSRP puts it firmly on the cusp of mid-range amidst some stiff competition including the Chaser A31 I recently reviewed. While the MX500 does lack that certain eye-popping flash I will say the design is solid overall and very functional. The layout is flexible and even offers support for future growth which makes it perfect for those looking to the future.

This isn’t to say the MX500 is without its flaws. The magnetically held fan grills are nice in the sense that they are easily removed for cleaning but overall this leaves them feeling like cheap additions rather than a functioning part of the case. The rubber logo on the top part of the case and is completely unnecessary as it could have easily been replaces by raised metal logo like the top exhaust grill immediately behind it. The last issue I take is with the included stand offs in the case as there were only two. I was lucky and had plenty on standby as building systems is what I do but for the average, everyday consumer this could be a problem.

All in all the MX500 is a very functional case with its nice features and questionable design choices in equal parts. The case feels well put together and features a nice black powder coat inside and out but is overall more function that form. In the end, I am left feeling happy from a builders standpoint but a few things could be done to improve the design. 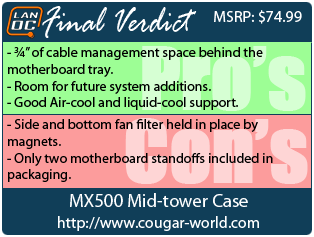 Author: William
Review and Event Staff
William is the newest addition to both the Review and Event staff. Being in charge of power, hopefully you have to see very little of him during our lans. Outside of lans he can be found engaging in his unhealthy obsession with all things gaming in between writing the odd review and bothering Wes at all hours of the day. An avid gamer nearly all his life, it is common for the latest MMO release to cause him to drop off the face of the Earth for a week or two.
Discuss this article
Log in to comment
Posts in discussion: Cougar MX500

We have 1229 guests and one member online