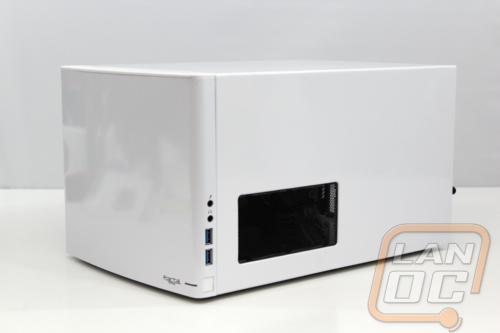 Years ago most every PC you came across was beige in color and a tower or desktop in size/shape. As things have progressed we saw that slowly move from beige to black and we now see a lot of manufactures offering white as well. It has happened so much other component manufactures have taken notice and we now see everything from RAM to power supplies that also come in white to match. When it comes to size, things have changed as well. We now have a range of options from large builds down to small table top PCs. Today I’m going to take a look at the Fractal Node 304 white. We have covered the Node 304 in the past but I’m excited to see what it looks like in white.

The most obvious thing from the Node 304’s packaging is its size. Its clear right away that we are dealing with a much smaller case design. To support that there is a line drawing of the case across the front of the box along with the Fractal logo and the Node 304 name across the top. What isn’t obvious right away is if you have the white or black version of the Node 304 in hand, but that is just a small detail. Inside the case is still protected like you would find any other case with foam on each side keeping it protected in shipping as well as a plastic bag wrapping it all up to keep the dust and finger prints away. Inside along with the case you will find a ziplock bag with two things inside. First you have a warning to contact the company if you have any issues with the case, the second is the included manual to help you get everything put together. 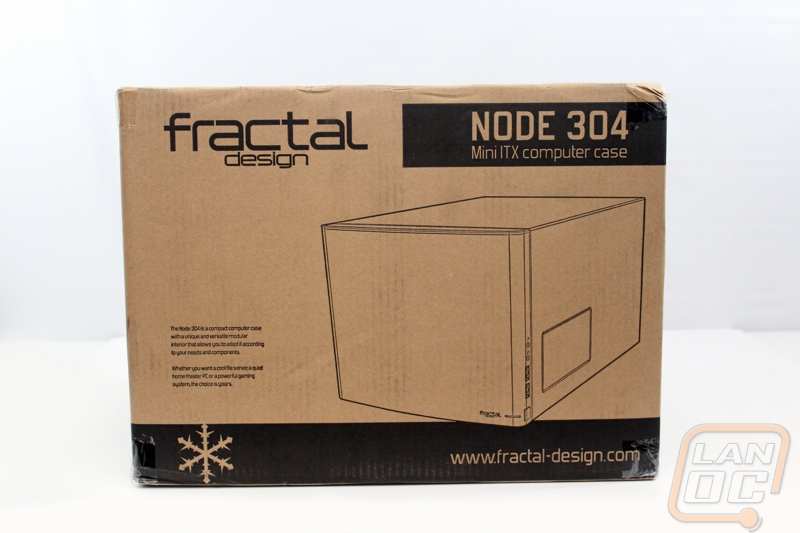 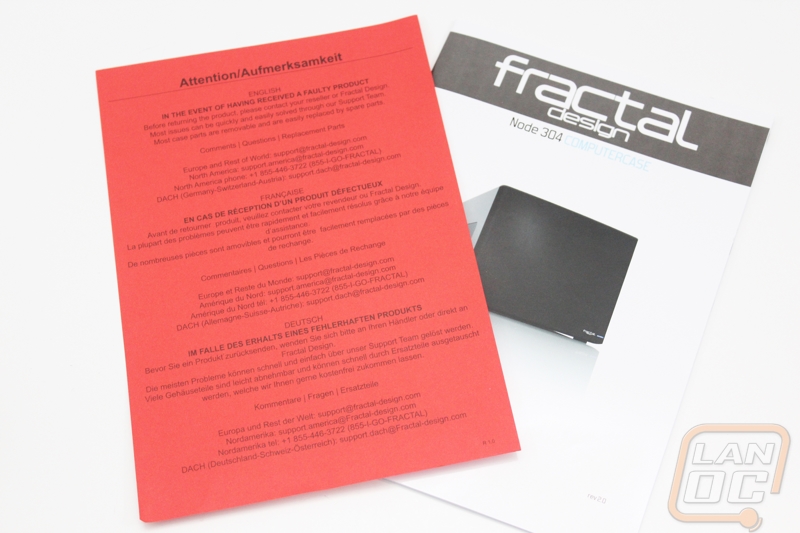 It’s really surprising how much of a difference switching to white made with the Node 304. Part of the difference, beyond the color, is the glossy finish that the white finish brings along with it. This along with the black accents the Node 304 White really catches your eye. The black Node 304 was clean but its all black design doesn’t really draw your attention like this model. 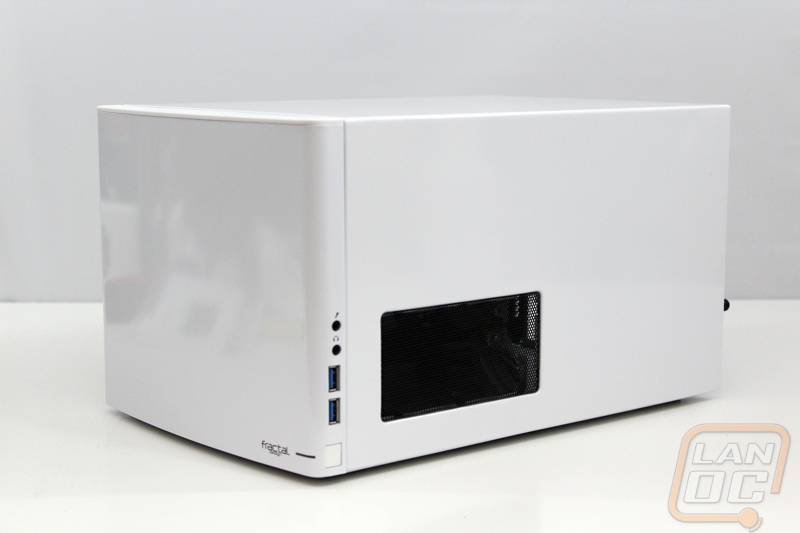 The “front” I/O panel is actually around the corner. The only thing on the front is the small Fractal logo in the bottom right corner and the slit that lights up pointing you to the power button. You also get two USB 3.0 ports as well as the standard headphone and microphone ports. 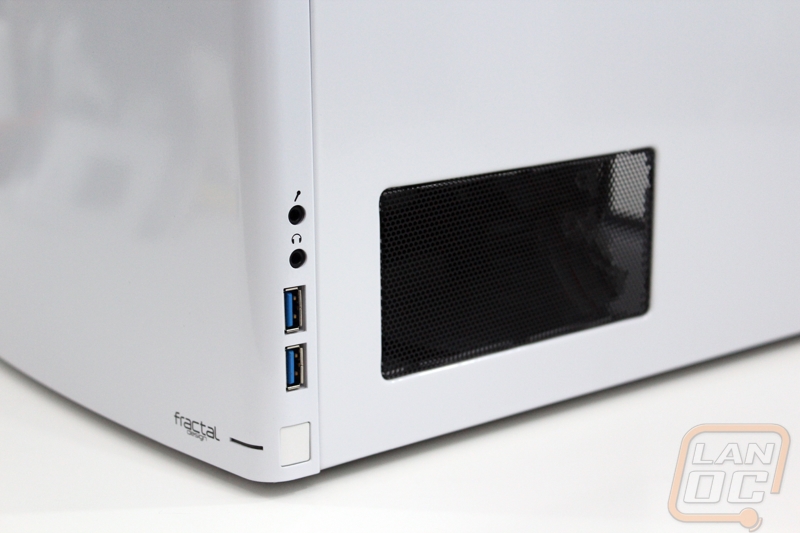 On the right side of the case you have a black mesh panel for ventilation that lines up with the exhaust of the power supply. 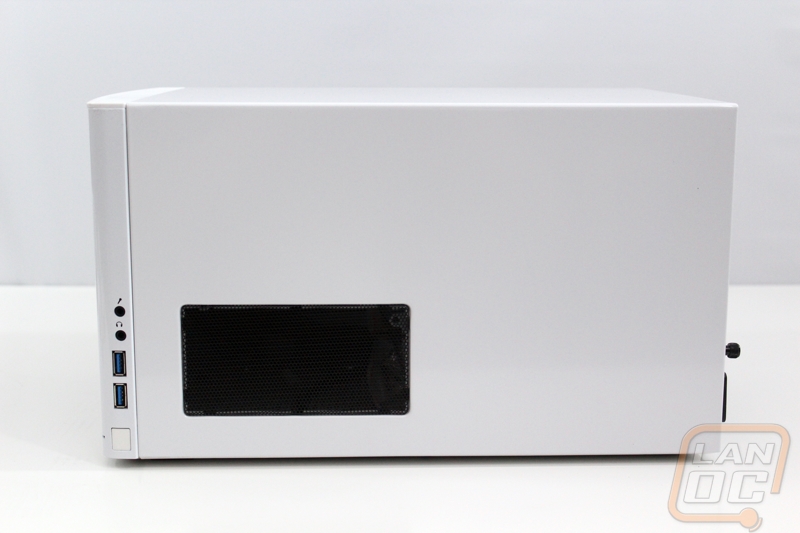 Around on the back you have a 140mm exhaust fan with 120mm mounts if you need them. You have two PCI expansion slots that give a little contrast with them being black against the white, much like the white expansion slot covers on the black Node 304. Next to the read I/O panel you also have the power connection as well. Up in the top right corner Fractal has also slipped in a fan controller in the form of a small switch. Lastly, holding the entire case cover on you have four thumbscrews, two on the top and one on each side. 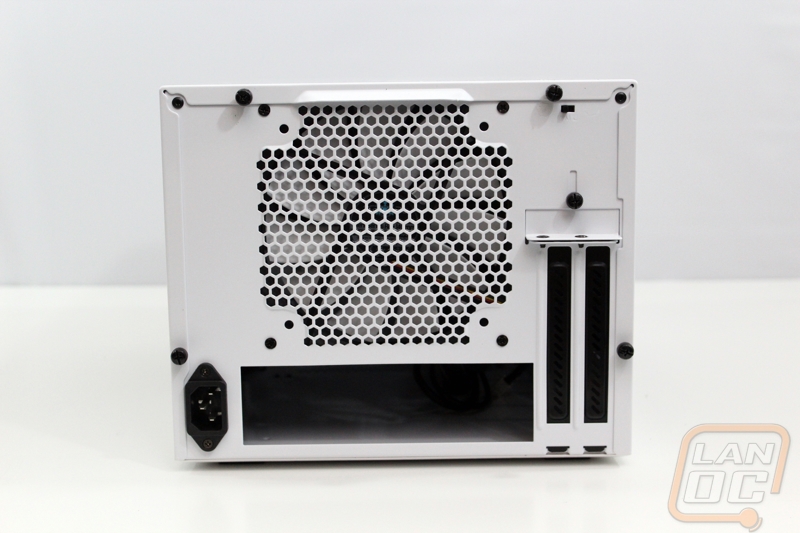 On the left side of the case there is a much larger black mesh panel than on the right side of the Node 304. This vent is an intake that is positioned to let your video card pull in cool air. 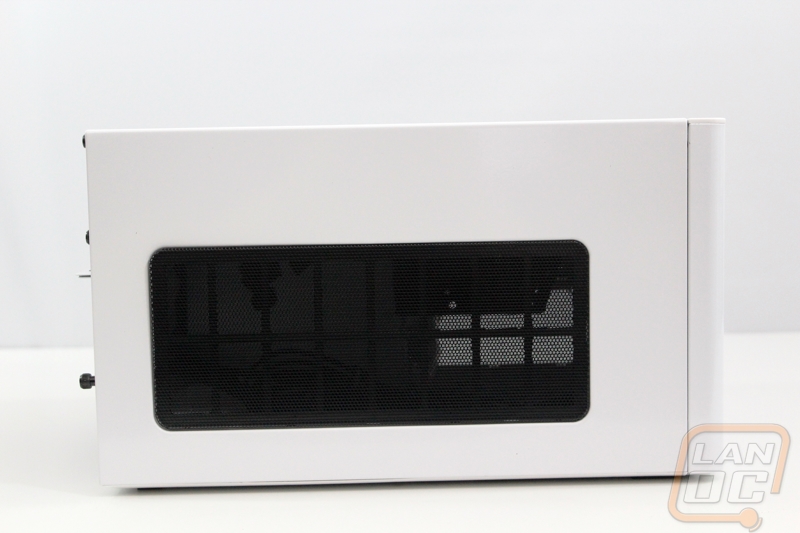 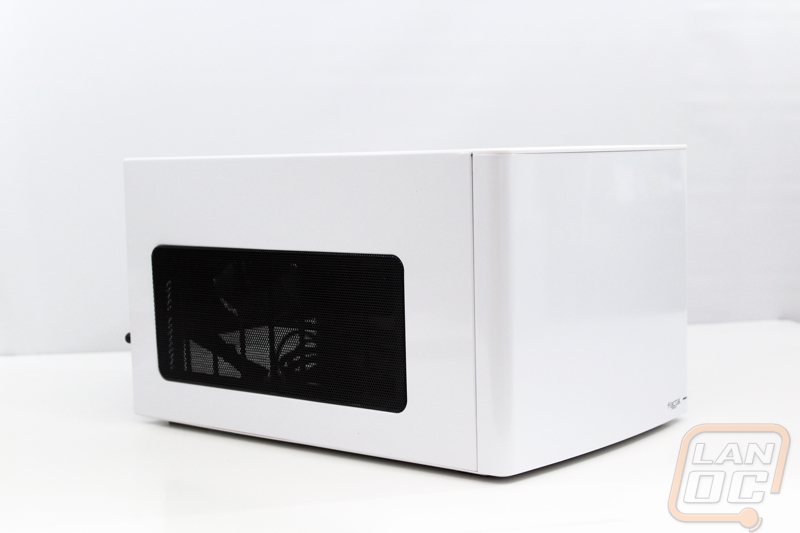 The interior of the Node 304 is obviously small due to its Mini ITX form factor but when you first take a look at it, it is hard to even understand where you are going to put everything. All of the wiring for the front panel, the three fans, and the fan speed controller all fill up the space along with the three hard drive cages. It isn’t until you pull those cages out that you can really see what you are working with. Basically you have just enough room to place your Mini ITX motherboard next to a power supply and you have taken up the entire bottom of the Node 304. This is really typical of cases of this size though. The power supply mount is completely inside of the case with a cord that runs from the back of the case and plugs into your power supply.

While inside we can see the dual intake fans on the front of the Node 304 as well as the 140mm exhaust fan on the back. I mentioned it before but you can see the small single switch fan controller that is built into the case requires one Molex power and it will control two of your fans. 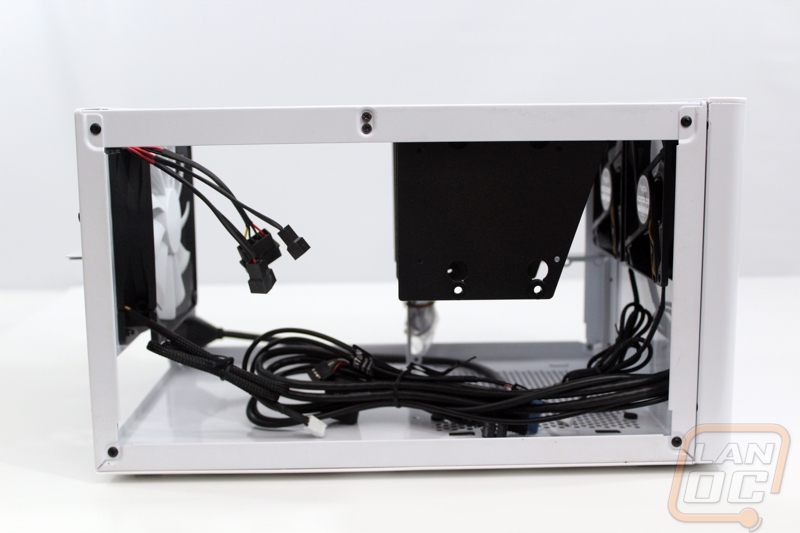 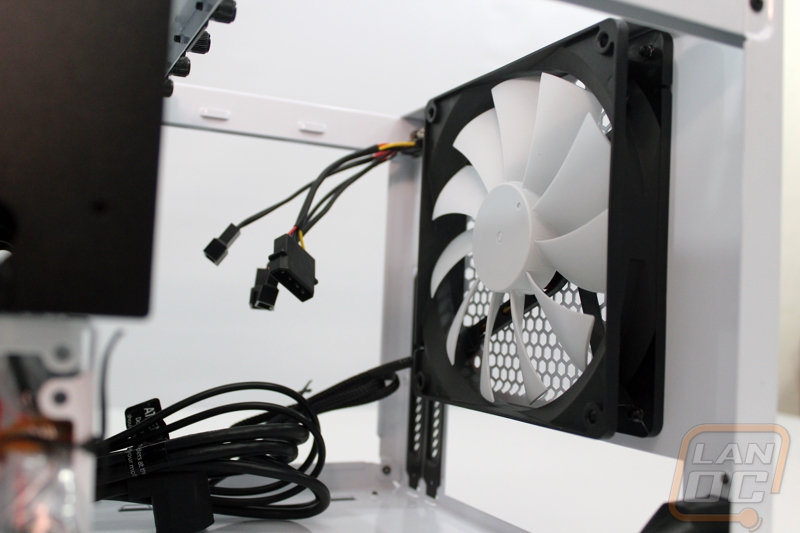 You will never see it when everything is installed, but the gloss finish of the white paint is impressive, even up under the motherboard. I was a little surprised the motherboard standoffs aren’t built in or pre-installed considering there is only support for one motherboard size. 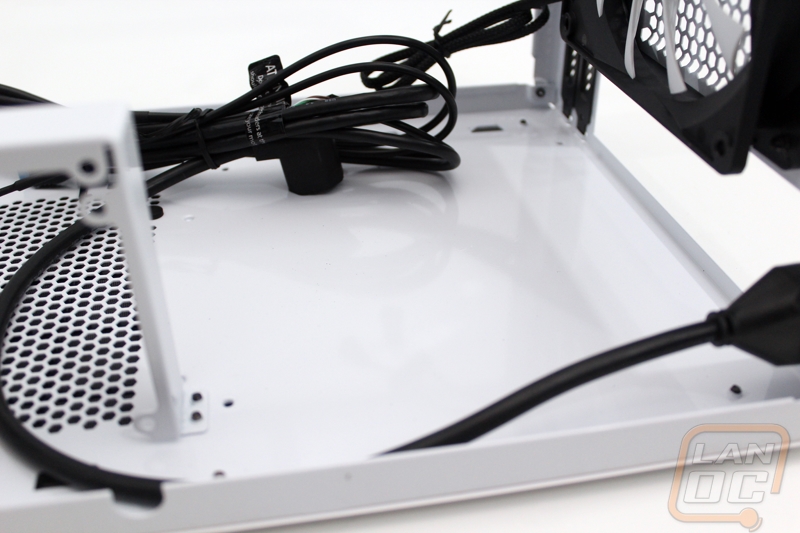 Each of the three removable hard drive enclosures supports 3.5 or 2.5 inch hard drives. The 3.5 inch mounts are made of rubber to keep the noise and vibration down. The 2.5 inch mounts aren’t rubber mounted but if you are installing SSDs this won’t matter. Each mount is help in place with two thumb screws on the end and one small screw on the top. Depending on your needs you can run sixe hard drives or you can remove a few to open up space for activities, like a full length video card. 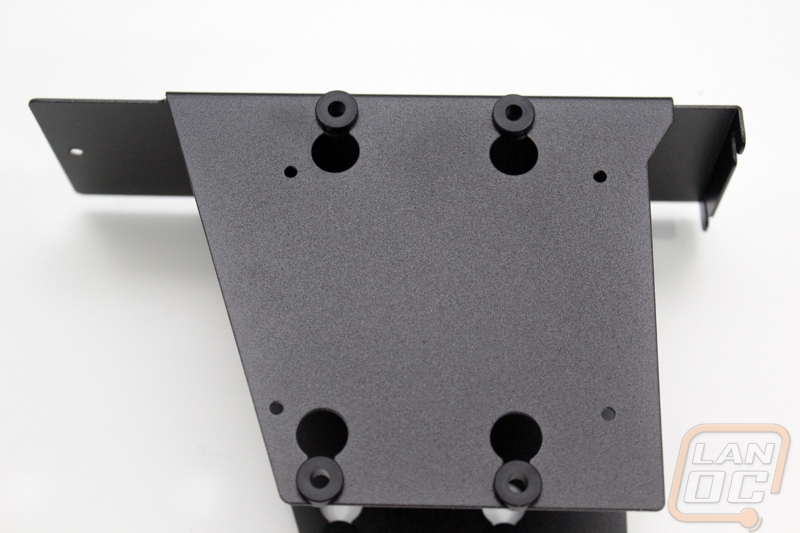 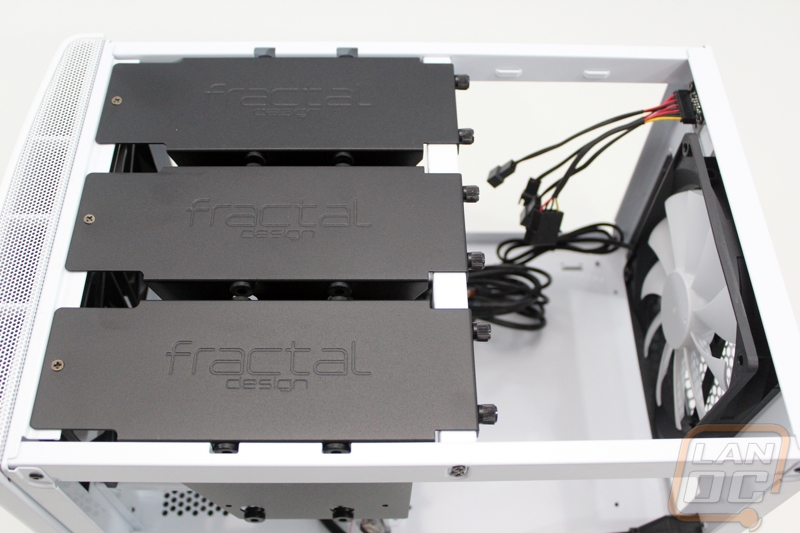 As I mentioned in the outside section, the two side panel vents both have specific purposes. The smaller vent on the right side of the case is an exhaust for the power supply while the left side vent is an intake for your video card. That means the exhaust doesn’t need a fan filter while the intake does need a filter. You can see that Fractal did keep this in mind with the vents; the exhaust vent is basic while the intake is removable and cleanable. 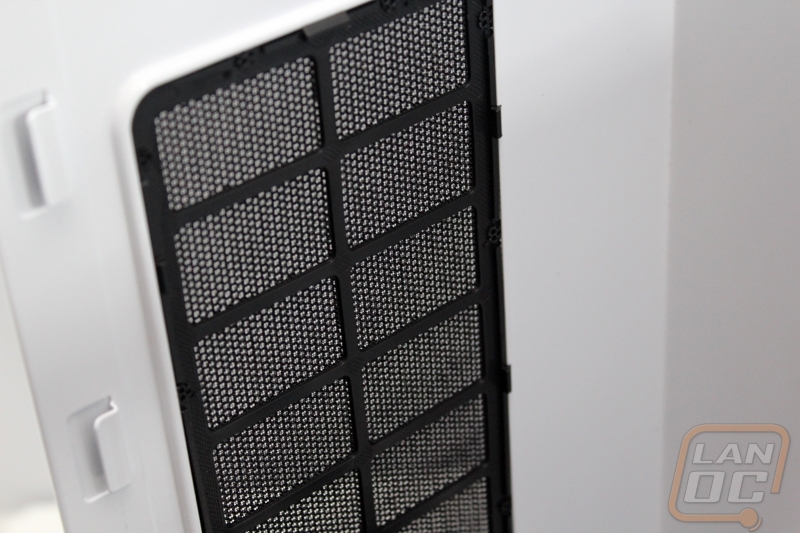 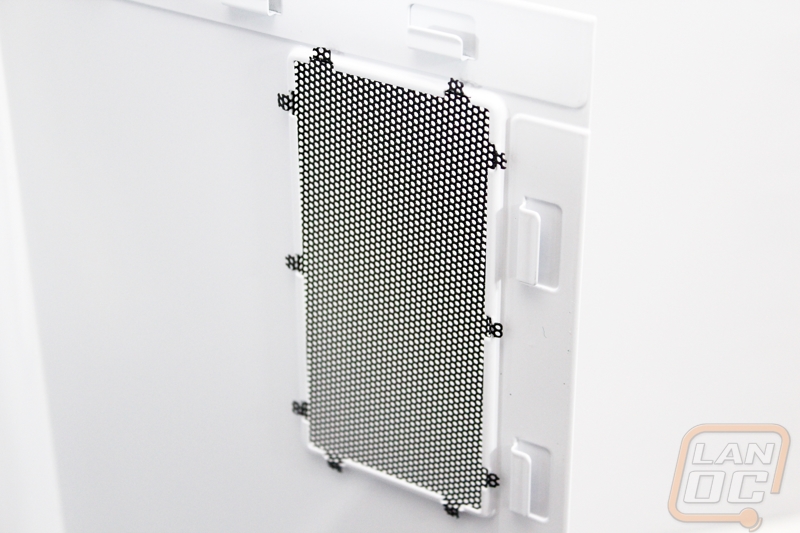 To get our Mini ITX test rig into the Node 304 I started off with installing our power supply. Our In Win power supply falls just at the maximum length of 160mm that is recommended on the Node 304 but I had no problems getting it in with what seemed to be plenty of room when I was finished. Next in was the motherboard, getting this after already installing the power supply did require a little work, the top support bar that holds the hard drive trays didn’t help things at all but in the end it went in smoothly. 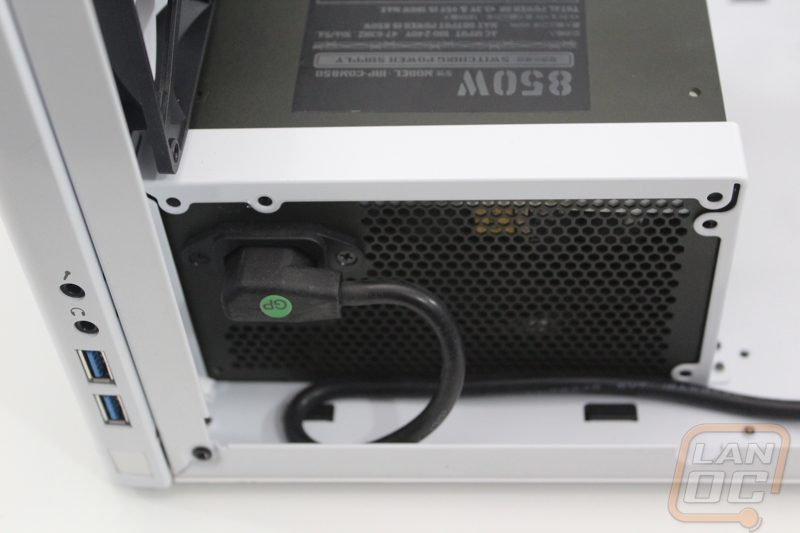 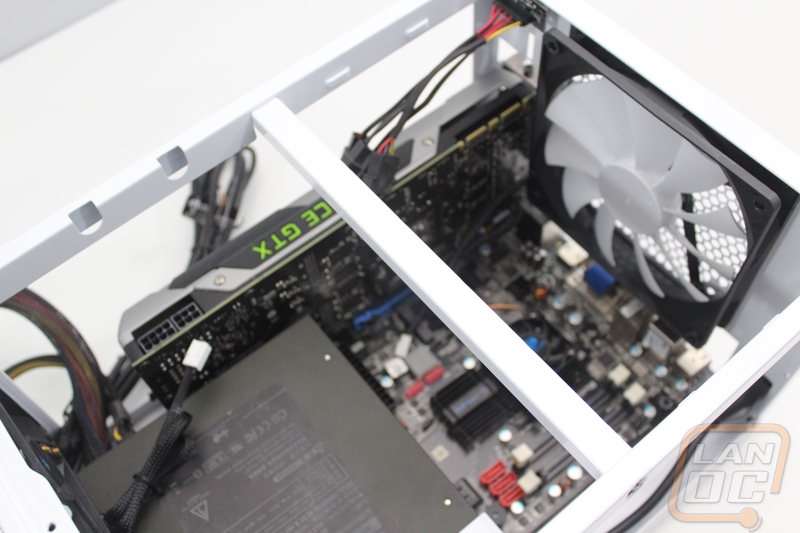 Next in was the Nvidia GTX 780, at 10.5 inches long I was very happy to see that it went in. I did notice a problem with our power supply at this time though. If you are going to push the PSU length to the limit I would recommend going with a non-modular design so you don’t have this issue. As you can see the length of the card limited how many cables I could hook up. Officially I wasn’t able to hook up a few of the cables I would need once you total in the 24 and 8 pins, a Molex for the fans, a SATA for an SSD, and two cables for the video card. On the plus side, going with a shorter card or video card should fix that or if you must you can skip the modular design and all of the cables will come out at the end out of the way of the card. Along with this accommodation, you will need to remove at least one hard drive cage to run a video card. Of course if you are looking for more of a storage device you can run with a small video card or no card at all and have all six drive bays. 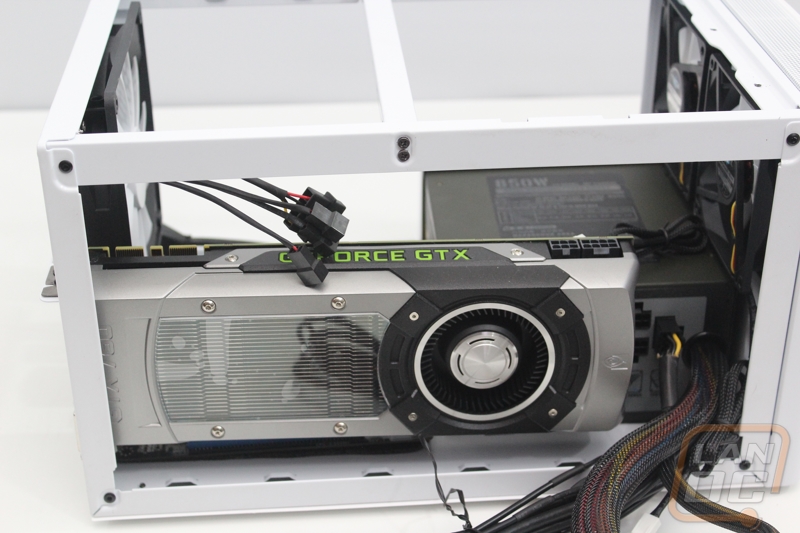 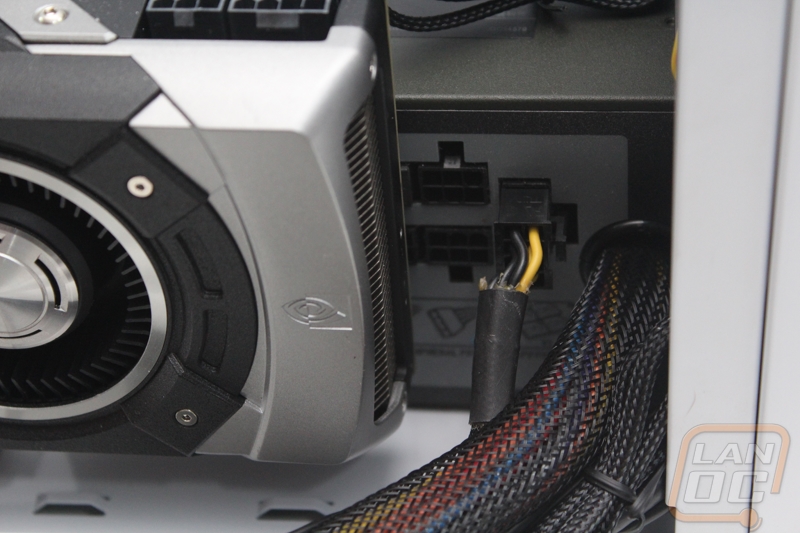 All black screws are included for the Node 304 along with three zip ties. I feel like they could have included a few more zip tires and as I mentioned before I wish they would have installed the motherboard standoffs beforehand or built them into the case. 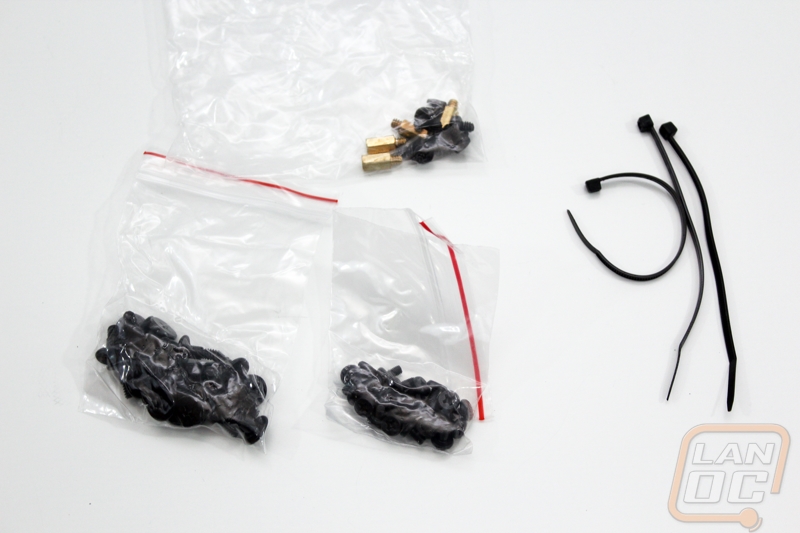 Wiring the Node 304 was simple, not because of a creative wire management design, but simply because there isn’t any way to hide your wiring so you just go for it. It’s going to be important for air flow reasons to try to keep the wiring as clean as possible, but there isn’t a motherboard tray to hide everything behind like on a traditional case.

With everything together, how did it all perform? Well considering the amount of heat that the GTX 780 can create I was impressed with what the two 99mm fans paired up with the 140mm were able to do. As for noise performance, it isn’t to the same level that some Fractal cases are with their sound deadening all over the inside but it wasn’t too bad at all.  When compared to larger cases with the potential for better air flow and more sound deadening options the Node 304 would fall into average, but considering the limitations that its size causes I would say its performance was well above average. I could completely see this being my LAN rig, picking it up and heading to events would be easy and it wouldn’t break your back. My only real concern would be damaging its great white finish.

Having dealt with a Node 304 before I knew I was going to enjoy using the Node 304 White. What I didn’t expect was how good looking the Node 304 looks in white. Fractal gave the Node 304 a great looking finish that was just as impressive under the motherboard as it was on the outside. I hate to generalize, but this is about what we typically see from Fractal, they always manage to put together designs that are great looking, high quality, at a great price. Speaking of the price, the Node 304 runs around $90 currently keeping it within range for any mid-range or higher build. There are cheaper cases on the market that are Mini ITX and white, but those same cases won’t include a built in fan controller or build quality this high.

My only complaint is the limited power supply size that caused us to have issues with our 160mm modular power supply in combination with the length of the GTX 780. As long as you keep that limitation in mind when buying your power supply, you can fit a monster rig inside of this small case. My biggest problem is I’m torn on if I would prefer to use the Node 304 White for a NAS or for a LAN rig, it fits both perfectly. If you are on the market for a small form factor case for a new home server, HTPC, or even a LAN rig you should keep the Fractal Node 304 White in mind. 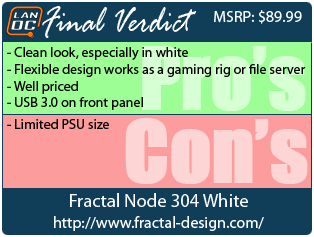 You might call him obsessed or just a hardcore geek. Wes's obsession with gaming hardware and gadgets isn't anything new, he could be found taking things apart even as a child. When not poking around in PC's he can be found playing League of Legends, Awesomenauts, or Civilization 5 or watching a wide variety of TV shows and Movies. A car guy at heart, the same things that draw him into tweaking cars apply when building good looking fast computers. If you are interested in writing for Wes here at LanOC you can reach out to him directly using our contact form.
Discuss this article
Log in to comment
Posts in discussion: Fractal Node 304 White