Right away it is clear the look that Cooler Master was hoping to achieve. With the case being all blacked out with a mesh front it gives it a business classy feel. It is the type of computer that can sit next to your desk and not draw any stares, but garner respect when gazed upon. The mesh design also shows that Cooler Master was keeping their namesake in mind when designing the case. 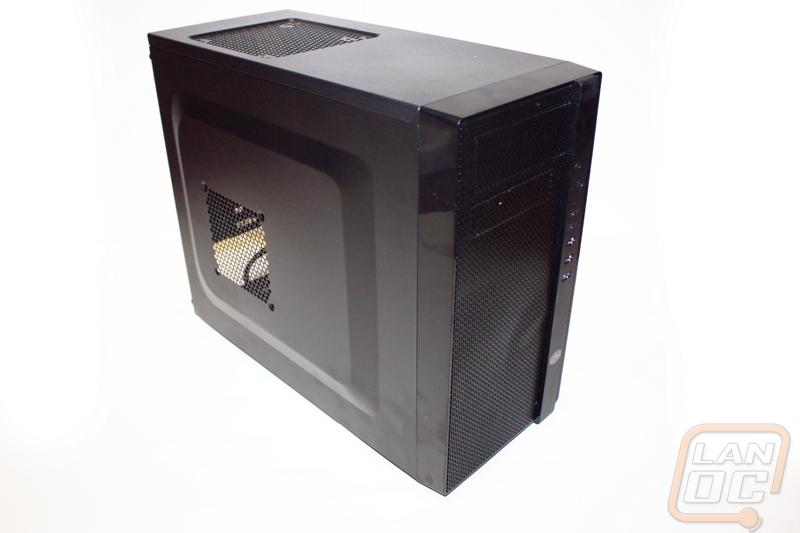 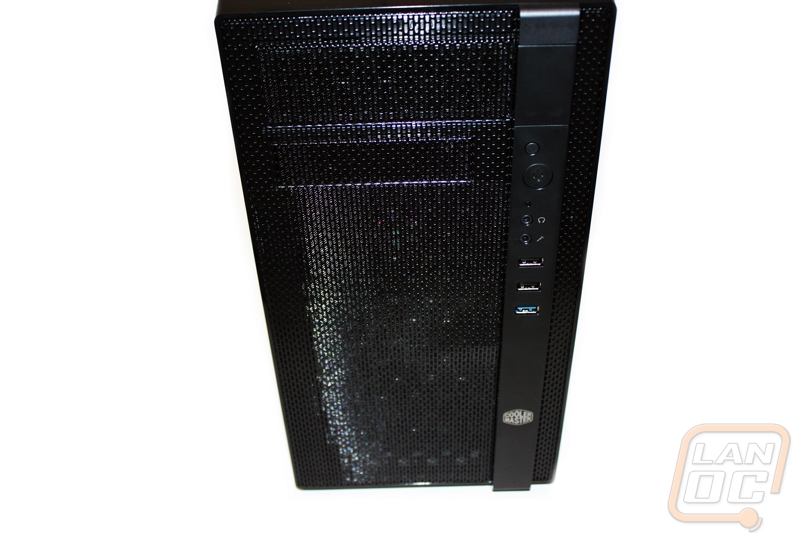 On the front we have all of the necessities including our power and reset buttons, headphone and microphone jacks, and three USB ports. One of these USB ports is the SuperSpeed USB 3.0, which is awesome because it is important to not only have the higher speed USB ports, but also be able to access them with relative ease, however I find it a bit odd that they only gave us one USB 3.0 port considering that a single plug into the motherboard is capable of doing two at the same time. I do wish that the buttons and ports were on the top of the case rather than on the front, but it’s probably due to my history of cases and a tiny bit of pickiness on my part. Finally at the bottom on the right hand side we do see a tiny bit of branding which feels like a bit of an eyesore on this otherwise beautiful look. 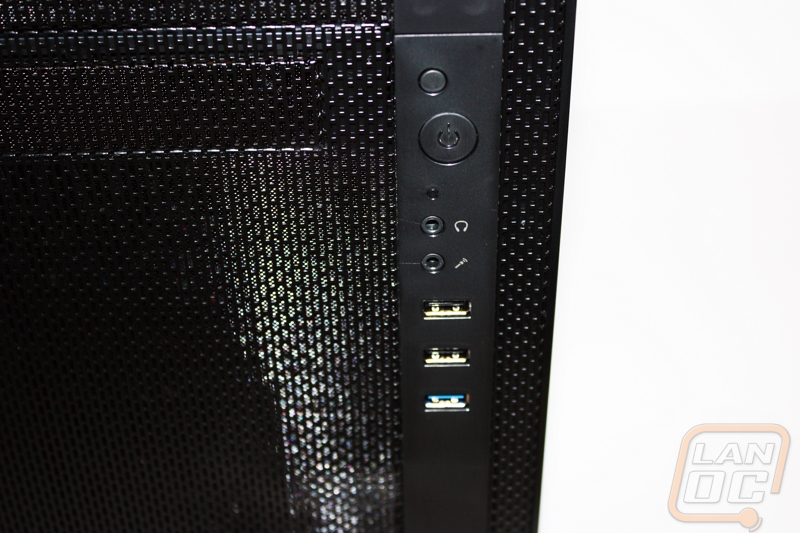 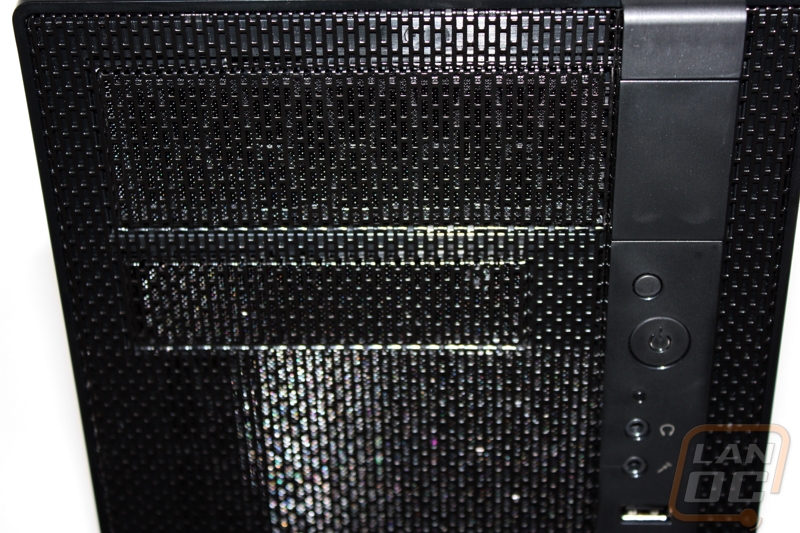 On the top we can see more of the simplistic and clean look continued on the top with a flat surface for soda and other computer ending beverages. There is another mesh cover that looks to be a place inside for another optional fan and some additional airflow with or without another fan. 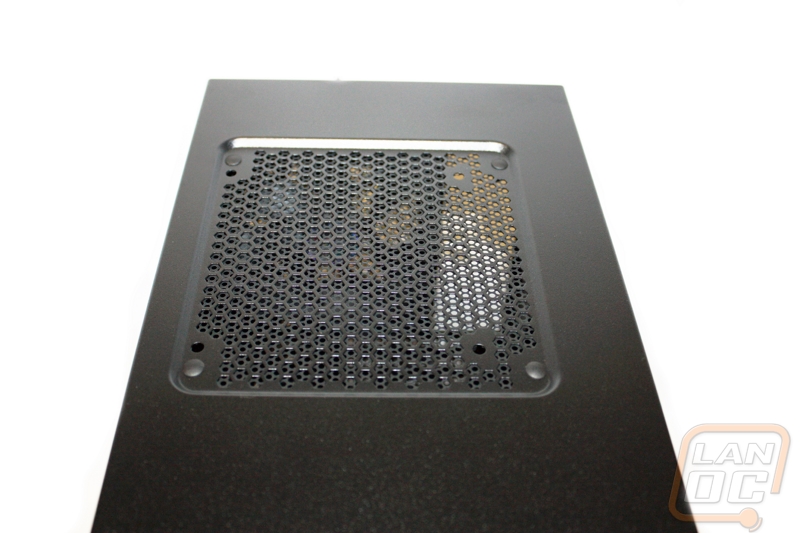 On the sides of the case we get more of the same. The clean look continues, but this time on expanded out sides. On the one side the expansion isn’t doing much, but on the back or off side of the case it looks like it will help tremendously with cable management.  We do also see another slot for an optional fan and some added cooling. 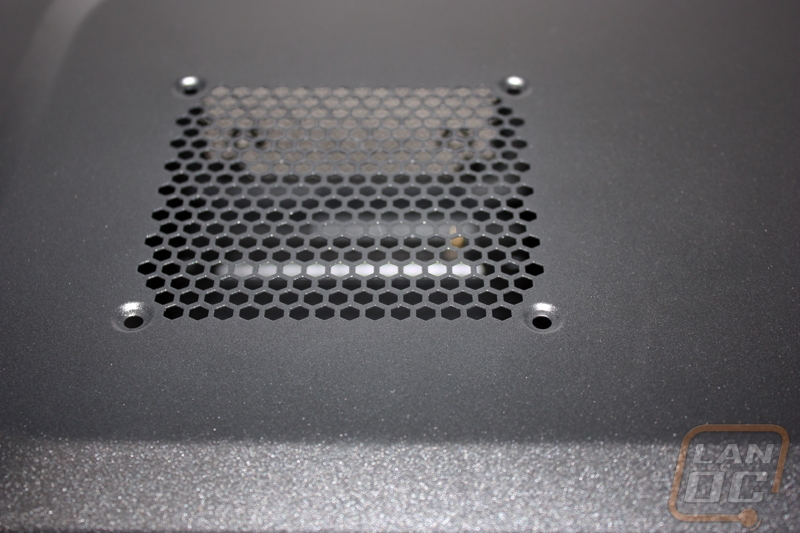 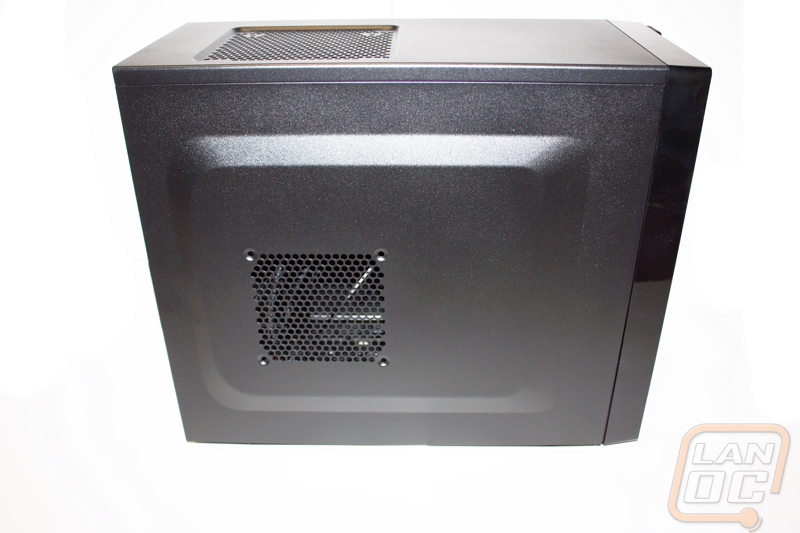 On the bottom we see that Cooler Master was once again thinking about temperatures in a couple of different ways. The removable filter and mesh opening will allow for good airflow to the power supply and also allow for easy cleaning. The filter is also able to be removed from the back of the case without having to pick the case up and the tabs on the bottom will also help glide it back into place. Also the feet on the base of the case look to be a bit bigger than on other cases. This will undoubtedly help the airflow and perhaps even allow for better airflow and cooling, specifically to the power supply, while on carpet. 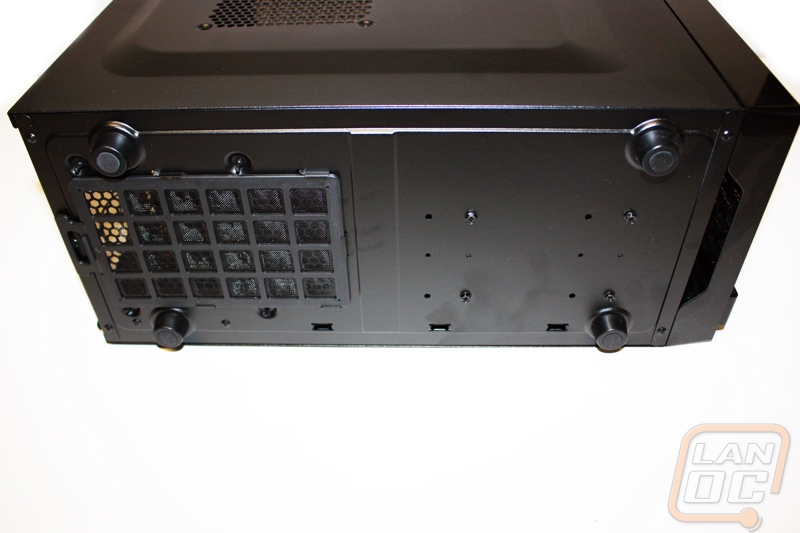 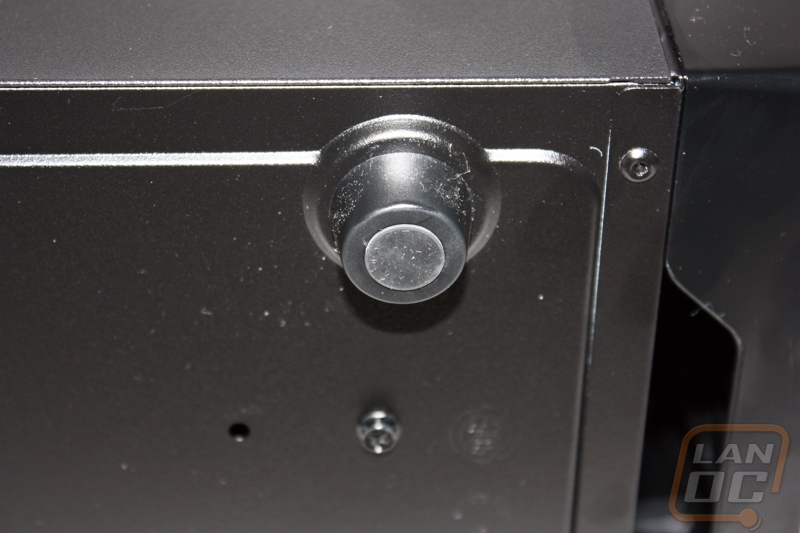 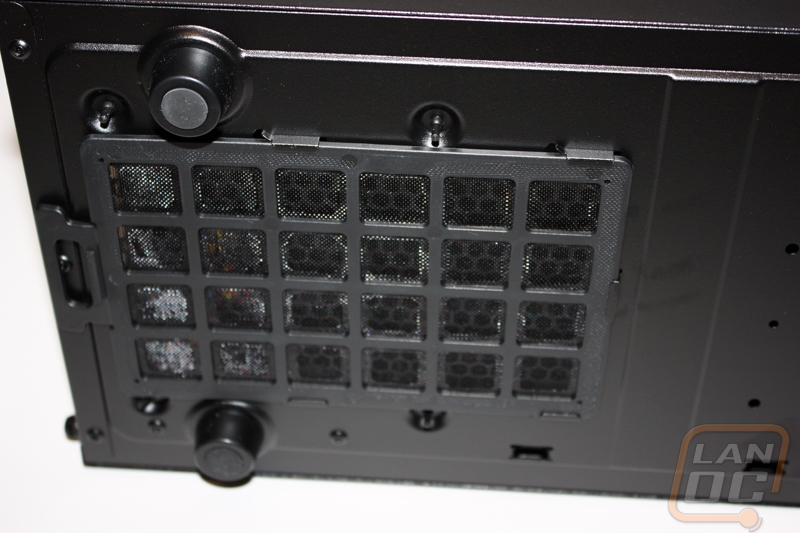 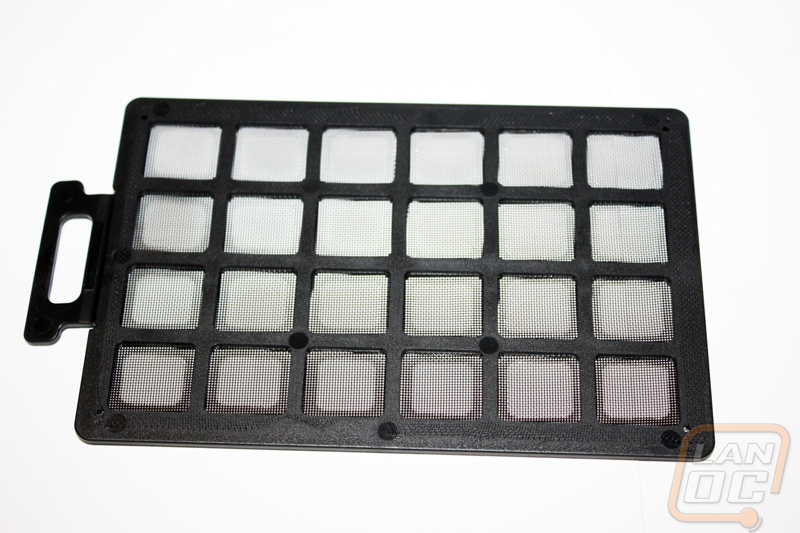 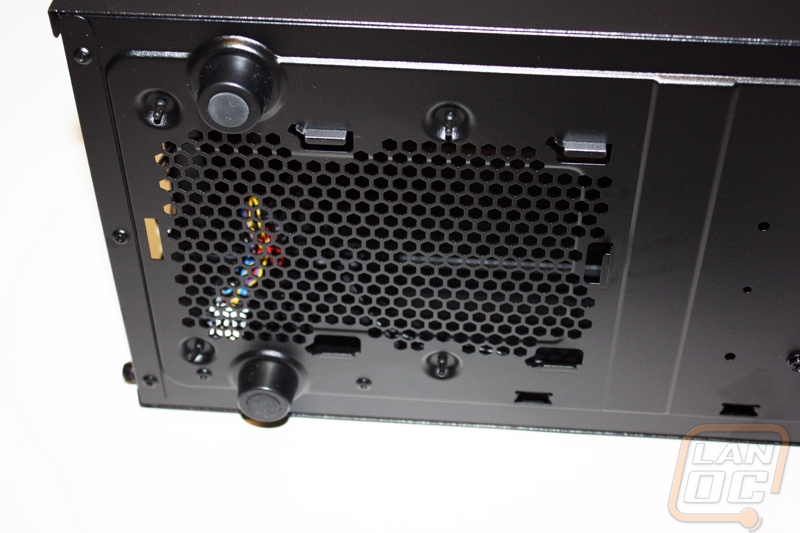 On the back of the case we can see yet another slot for a fan, but this time the fan is actually included with the case, and we didn’t even have to pay separate shipping and handling. Along with this are four vented PCI slot covers, two water cooling punch outs, a place for our power supply, and lastly an open area in the back is where our rear IO panel will eventually be housed. 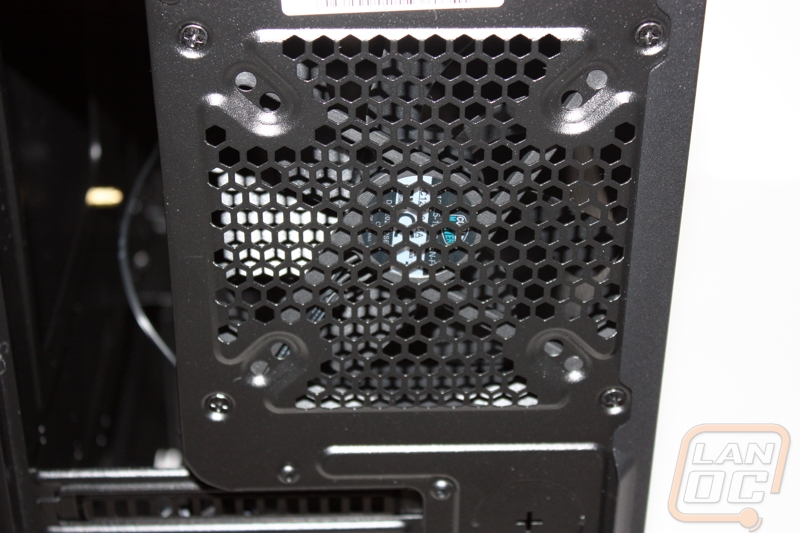 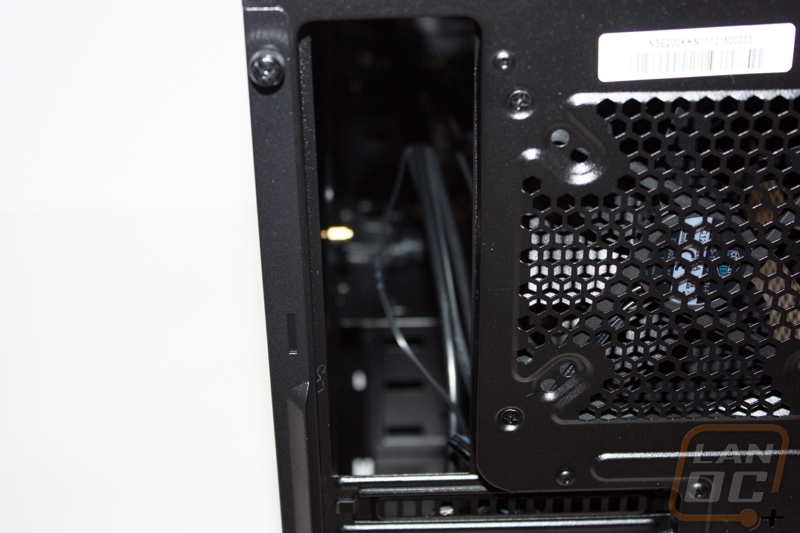 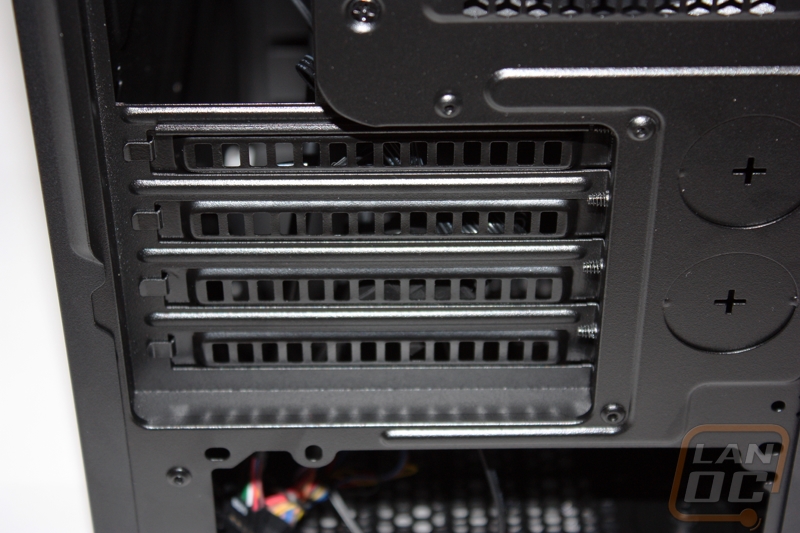 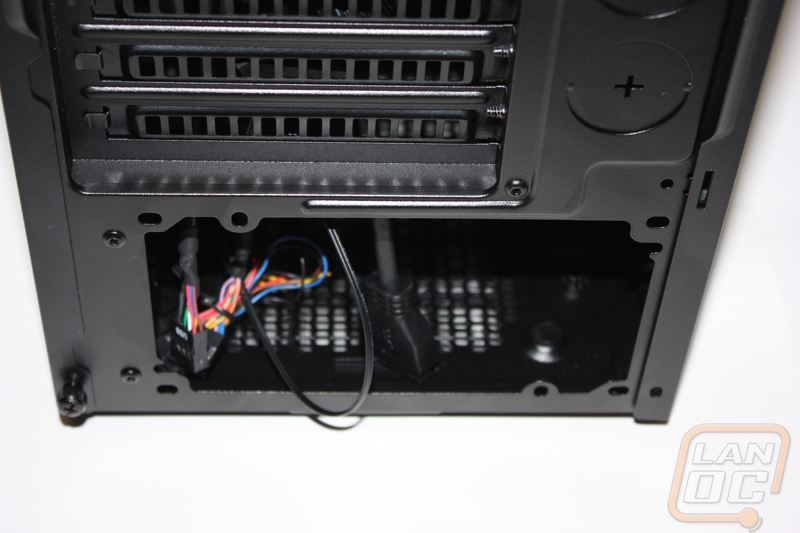 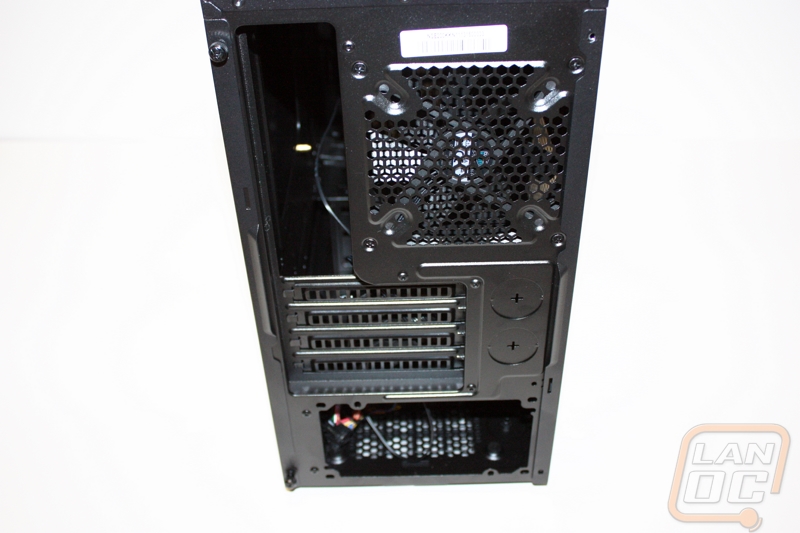