There are a lot of different sizes of PC cases available today. Some prefer huge rigs where they can pack everything possible into giant chassis, for others space saving designs are more attractive. The German company, Cougar is back with another option for gamers looking to put their components into a new micro-sized case. Enter the Spike which is a Micro ATX form factor light weight case. The Spike is Cougar's smallest case to date.  We are going to see how the features and performance stack up on the Micro sized newcomer.

Photos by: Ryan Croussore and Wes

The Spike case showed up at the doorstep in a standard brown cardboard box splashed with black designs and text. On the front you see Spike in large bold letters and a printed design showing the front of the case. You also see the Cougar logo and that they call this case a Mini Gaming Tower. 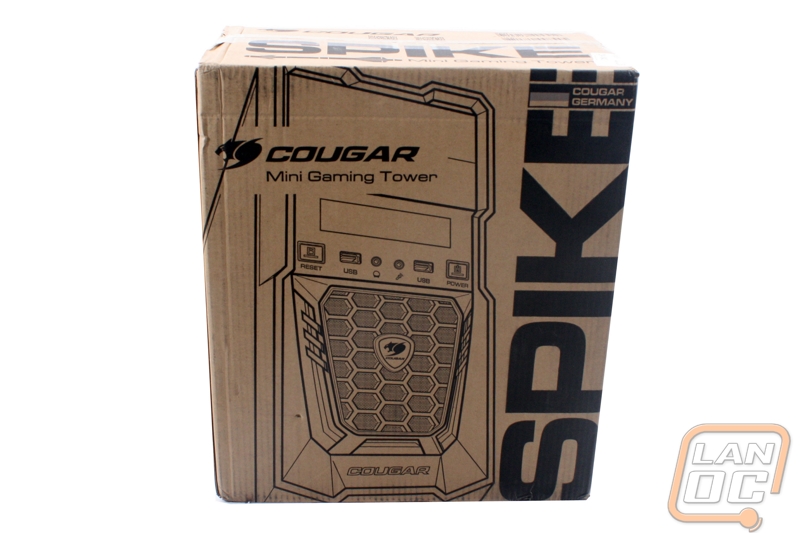 On the right side you see another design of the case and more Cougar and Spike logos. There are a few large barcodes on this side as well as a large sticker with information used by Cougar. 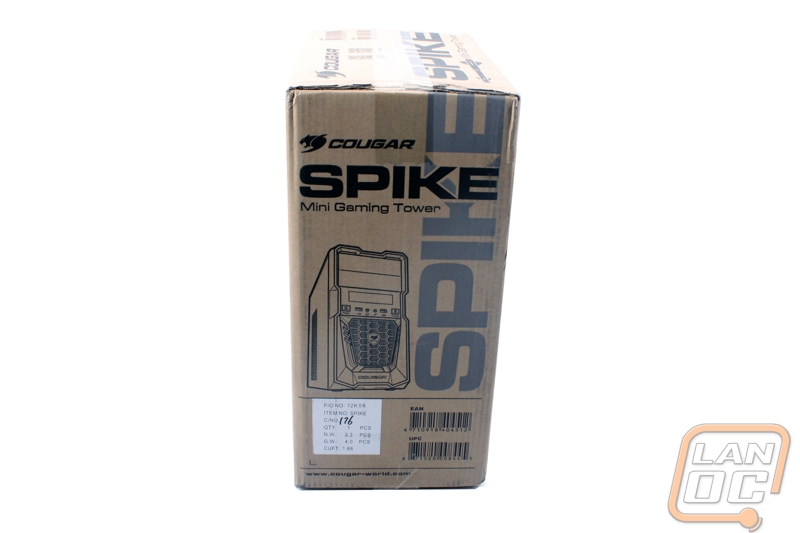 Over on the back of the box you see a diagram as well as a listing of the features. It also lays out some of the details regarding diferent sections of the case.  It also makes it a point to show you that the case can take up to a 330mm graphics card. 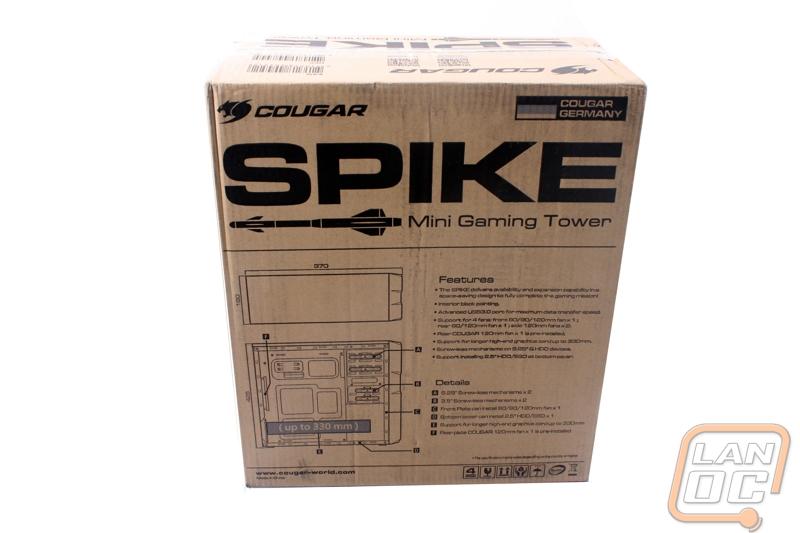 After opening the box you will find that the case is packed with two styrofoam containers, as well as some platsic to get the case to you safely. 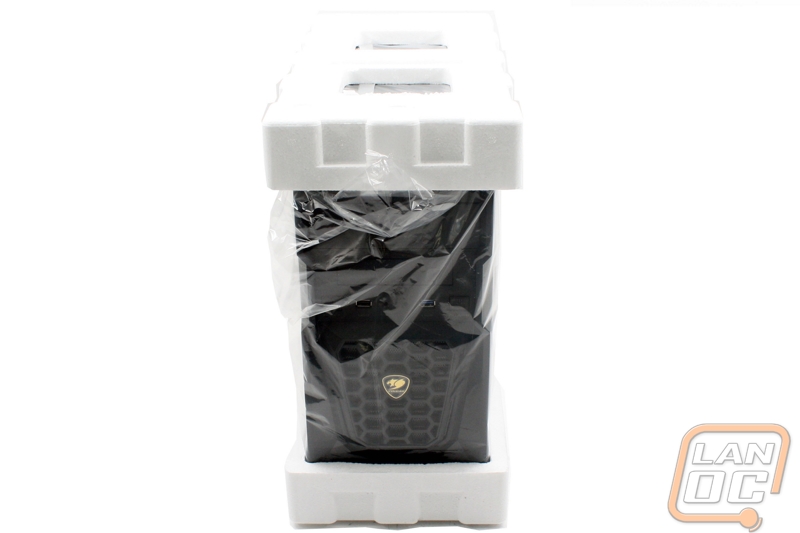 Cougar obviously wanted to give the Spike some character, but outside of the front face plate, its a very standard box regarding the exterior. The face plate does have add personality to the case, featuring many accents within a raised frame. The three external drive bays, two 5.25" and one 3.5", are flushed against the inner most surface accompanied with the USB ports, one 2.0 and one 3.0. The fan area protrudes back to the frame's height and declines to the bottom of the case sporting a honeycomb mesh design for improved air flow. 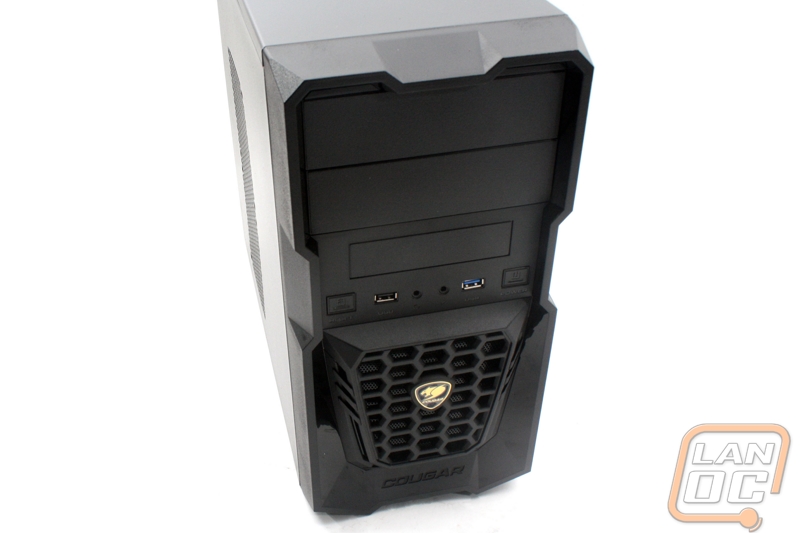 As mentioned, the remainder of the case is fairly vanilla: straight, flat surfaces except the left side panel with features optional fan mounting areas. While the MSRP is certainly a big perk of the Spike, you can feel it in the material. The metal is pretty thin and can seem a bit flimsy. 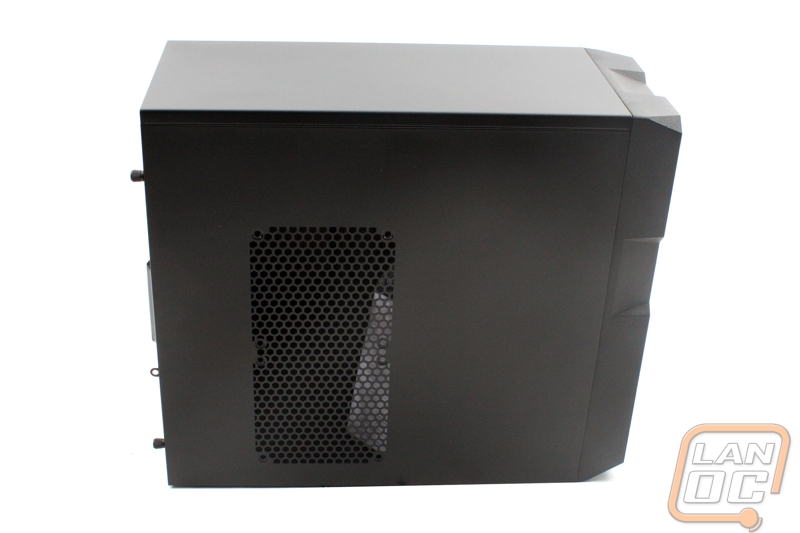 The side panels come together with thumb screws on the back of the case, and the PSU cutout is an obvious giveaway that it will be top mounted. No grommets are here for any sort of water cooling adapation. 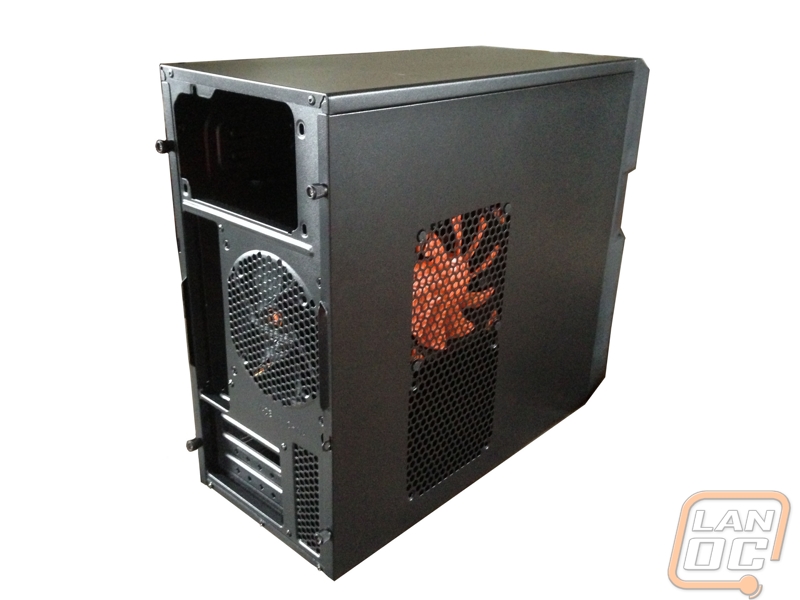 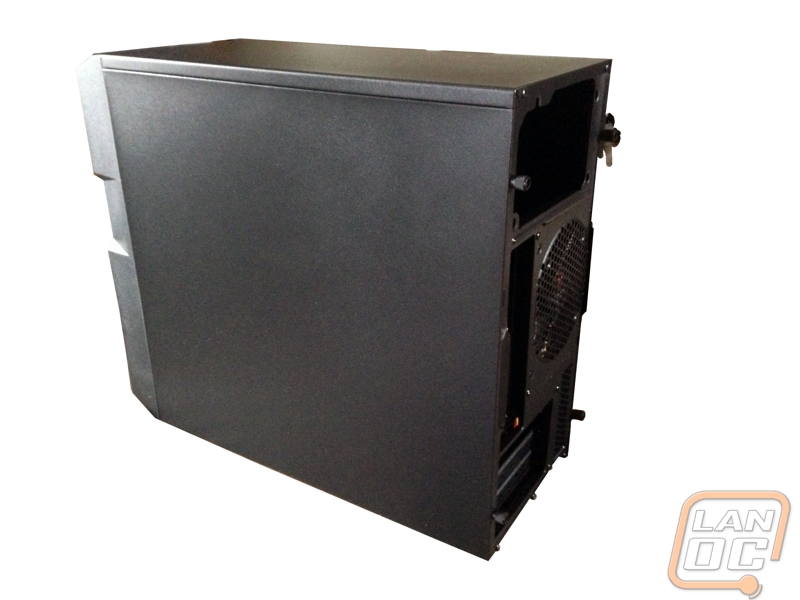 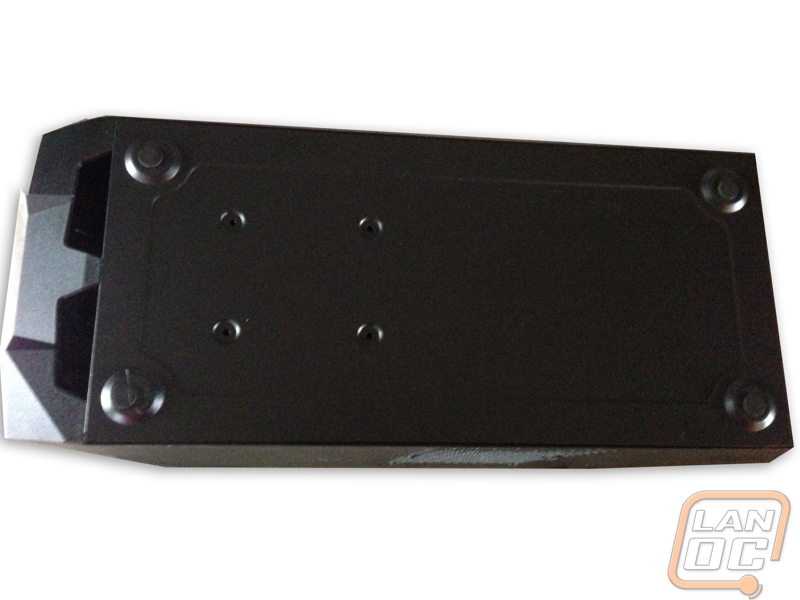 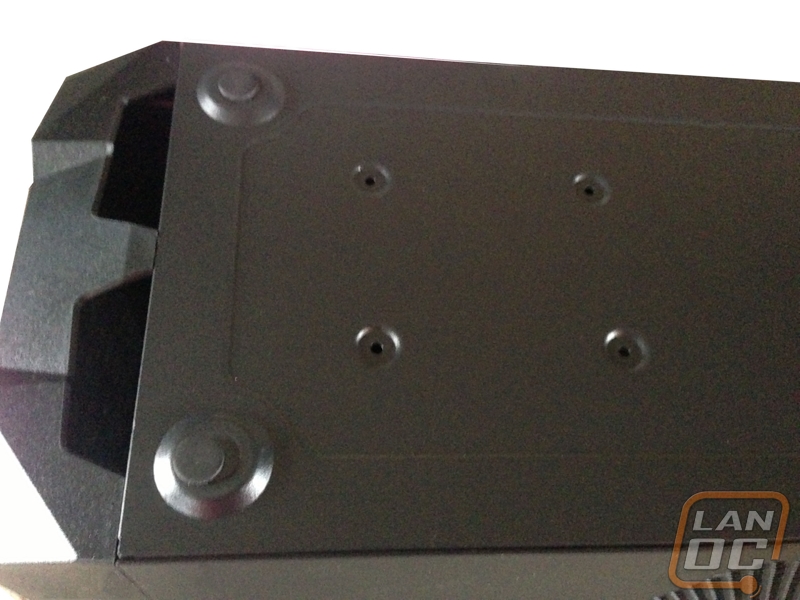 The Spike is marketed as one of Cougar's mini gaming towers, and of course one of the hardware pieces most associated with the gaming crowd the video cards. The GPU market is in no short supply of beefy cards, and the Spike ensures compatibility with high-end dedicated graphics by re-arranging the layout a bit. The power supply is top mounted, which will play into the cooling system discussed later. The immediate effect is this open a unencumbered area for the PCI/e lanes of your motherboard: 330mm to be exact. Take the HD6990/7990 as examples, both coming in at about 12", or just above 300mm. 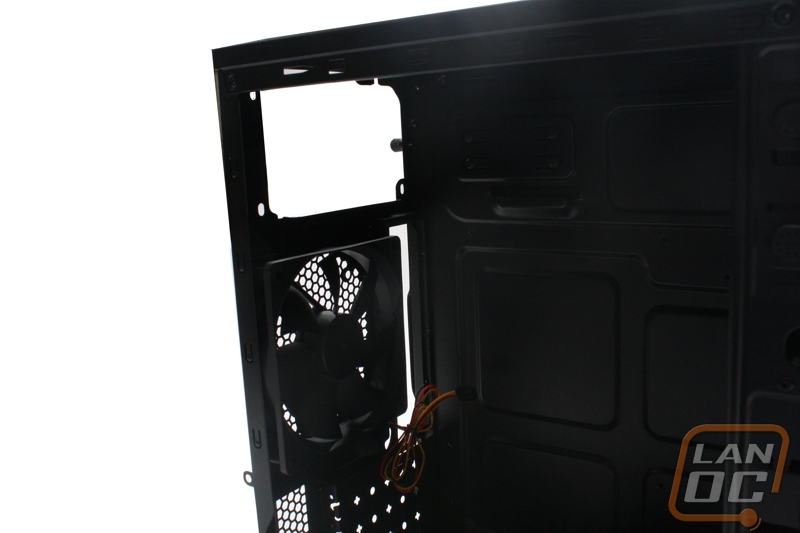 Since your video card won't be laying flush on the bottom of cases, Cougar capitlizes on the floor real estate with a 2.5" drive mounting area, perfect for an SSD. The traditional drive bays are at the front of the chassis per the norm, two external 5.25 and two internal 3.5" bays operating with a tool-less design. From the factory you'll find the cabling for the front I/O panel. 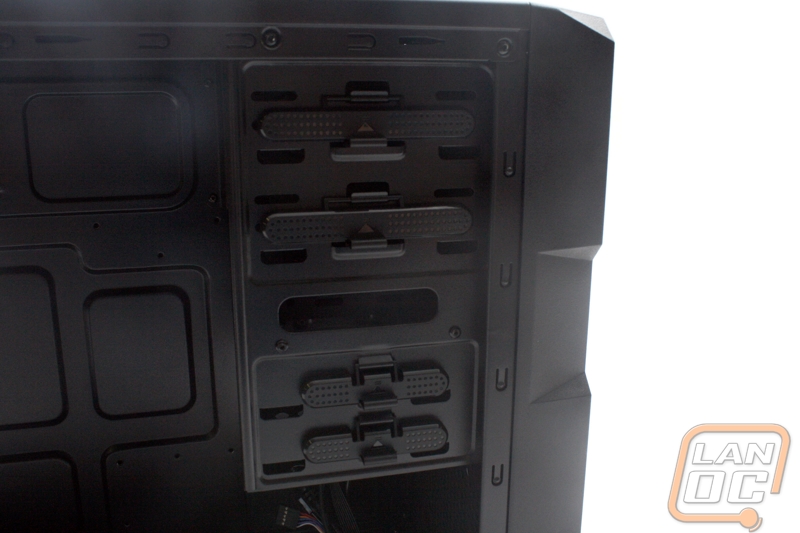 Revisiting the PCI area, the Spike has four slots available under the rear I/O cutout. This is a budget-friendly chassis, so the placeholders are the temporary bend-and-break fashion. Cougar makes up for it with a nice finished entire though. The rear exhaust fan has been relocated to the middle of the backplate, which is 120mm swappable for an 80. 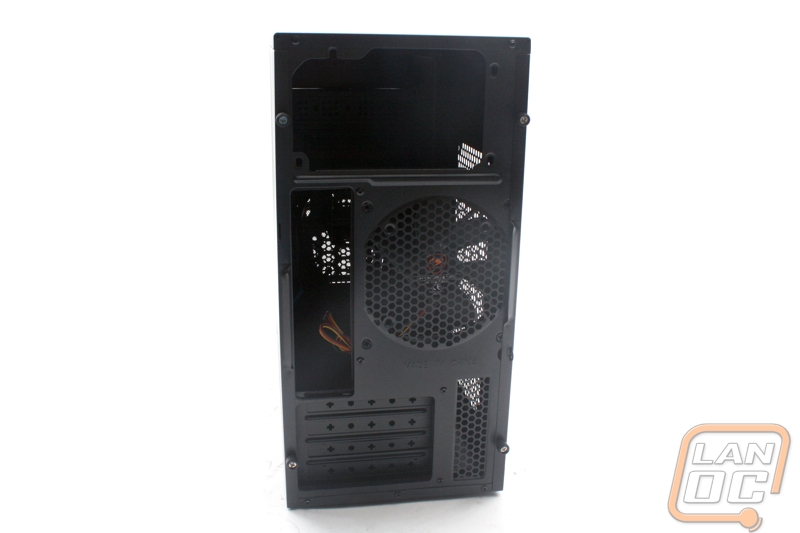 Other fan locations include a front option 80, 90, or 120mm fan, and two 120mm fan upgrades on the main compartment side panel to aid the airflow. Also worth noting is that the majority of cable management is likey to route through the cutout at the front quarter of the chassis, near the front intake fan. This creates a cooling system with a front and option side intake and rear exhaust completely reliant on the rear of the case, through the PSU exhaust and rear fan. Worth noting is that with the absence of any sort of grommets, the Spike isn't going to be very water cooling friendly. 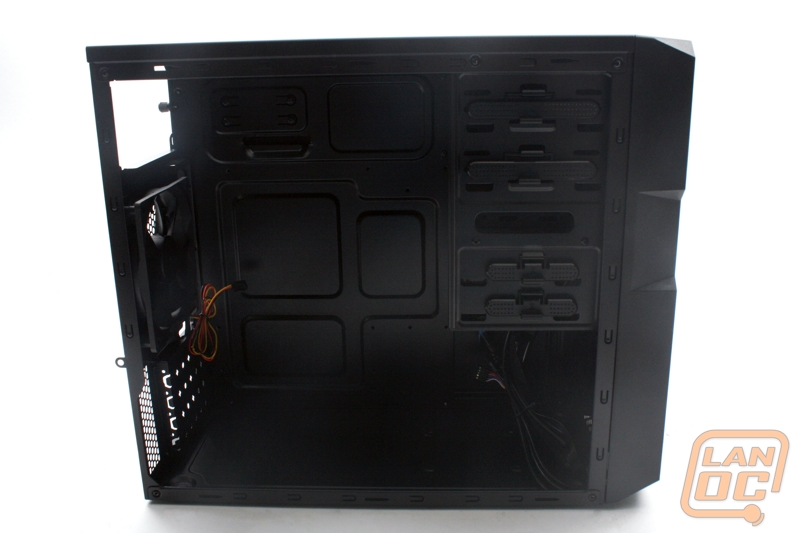 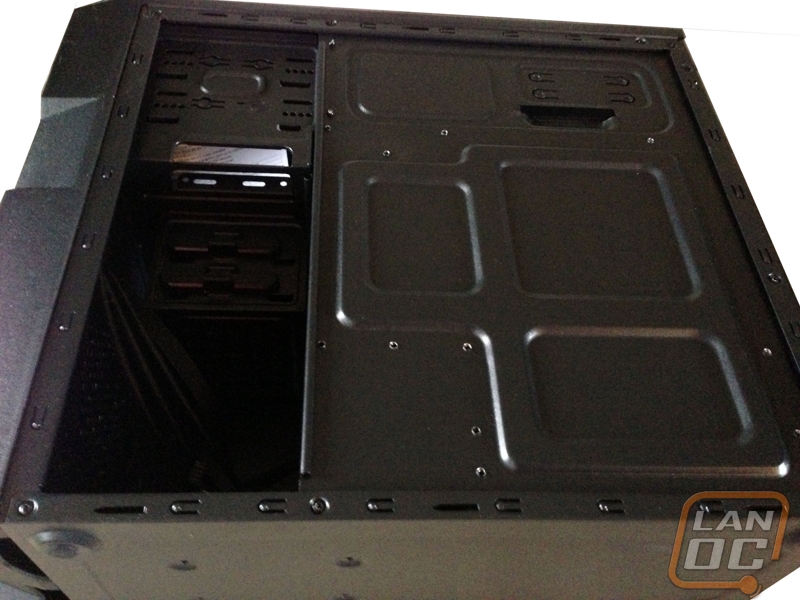 Given that the Spike case is a Micro ATX case, there is a decent amount of room to work with inside of the case. I started first with the power supply. The PSU installed just as easy as was expected, there is a little shelf in there for the power supply to sit on to support the PSU. With the power supply out of the way, next was the motherboard. Out of the box there were no standoffs installed inside the case. You typically will see at least a few pre-installed because there are ones that every type of motherboard uses. Using the provided standoffs, I dropped in the motherboard and after a few screws I was ready to move on to the graphics card. 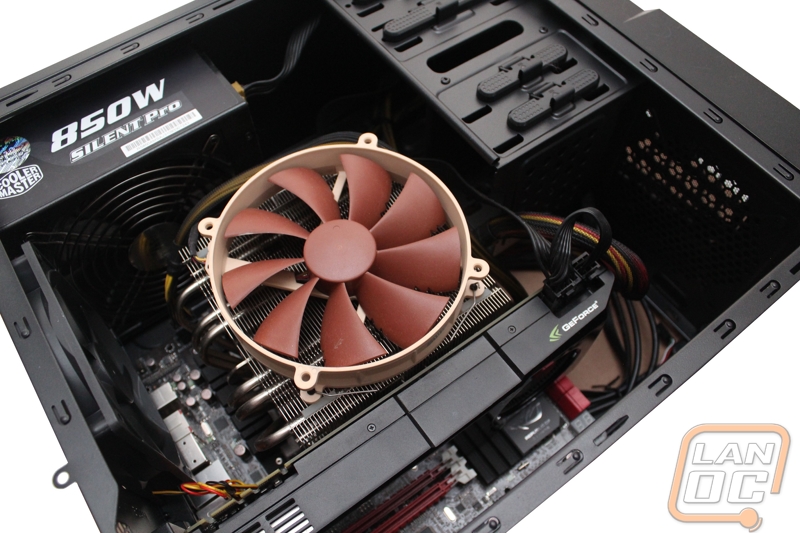 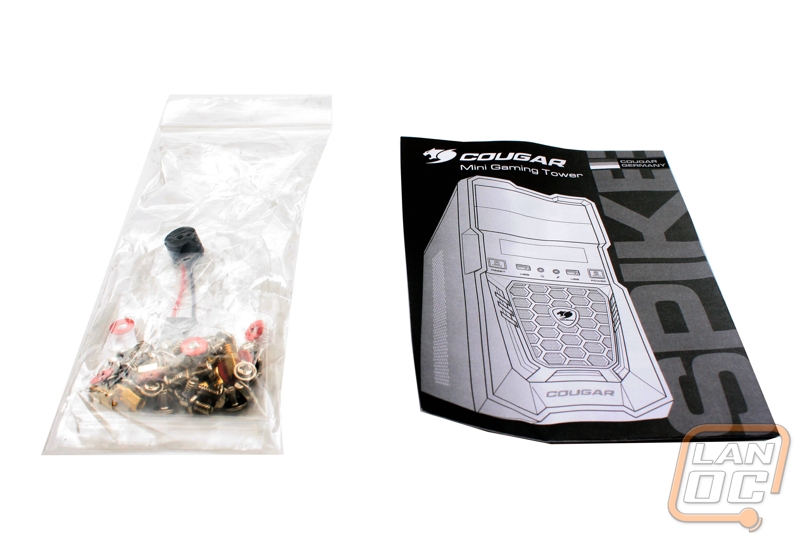 As mentioned before, this case has four expansion slots on the back. Instead of the removable slot covers these are the punch out type of brackets. The punch out type are a little less convenient but they are just as effective. You will see that an even a longer video card will fit nicely into the case. There is plenty of room for even some of the massive length cards out there. 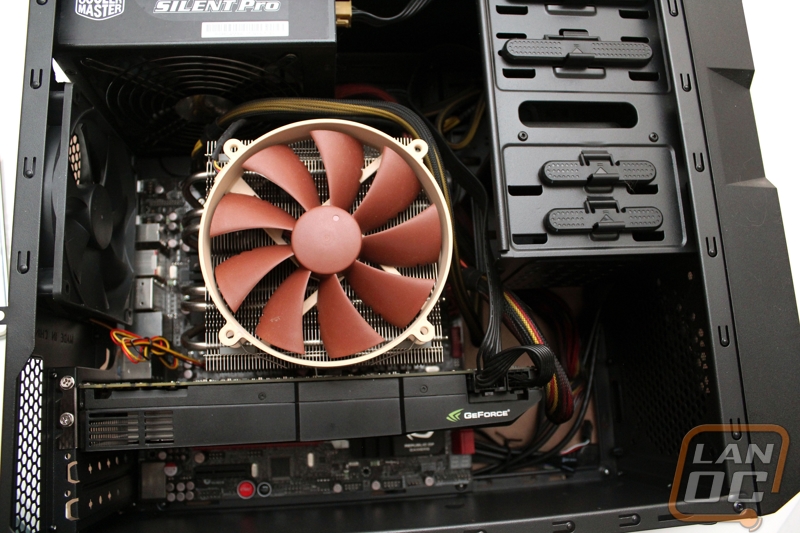 The case doesn't really have any cable management features built in. There are no holes in the motherboard tray for you to route cables. Also there is no cutout for changing the CPU. So if you need to access the back of the motherboard you will be forced to completely remove the board. I feel that they did not include the cutouts because they did not want to alter the strength of the case, which is already using light weight metal. 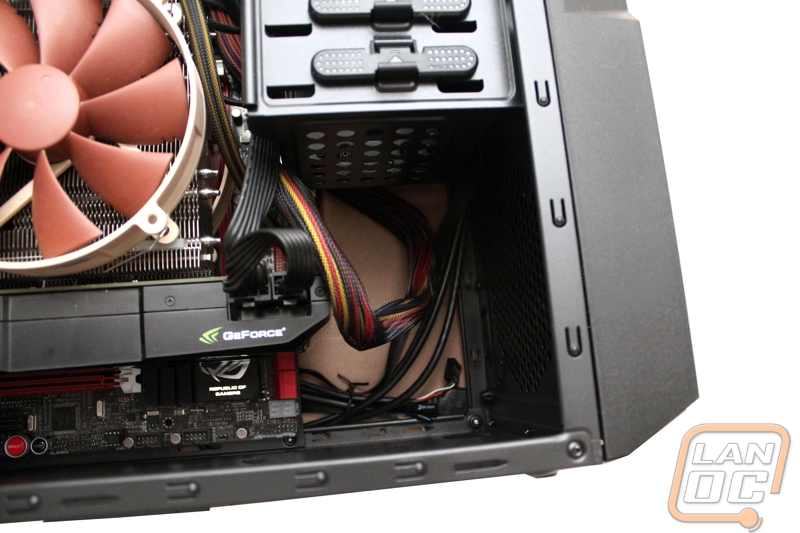 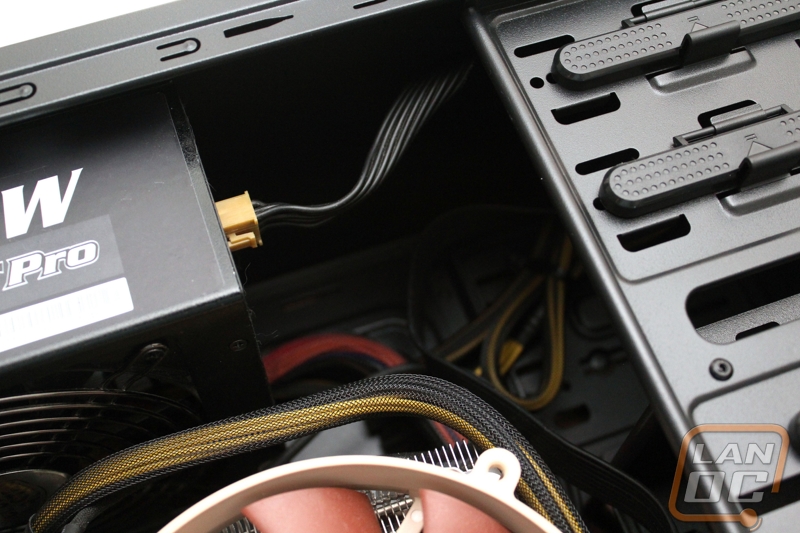 When looking at most smaller form factor cases you will notice that there are comprises in every one of them. You are obviously going to compromise overall space, and at the same time you are usually going to gain great features or a lower price. The Cougar spike offers some nice features and offers a low price point at $39.99 MSRP. One compromise of the case is the light weight material of the case. However this is both to keep the case portable as well as easy on your wallet. The completely painted black interior is a nicer looking than a grey metal case, but since you do not see inside this case the benefit is minor. I like the inclusion of a USB 3.0 and 2.0 port up front. The case will probably need some additional cooling installed when loading your rig in. Also this case would work best if you have a modular power supply as you do not really have the option for much cable management inside the case. You do not have to have a modular power supply but it would be best to keep air properly flowing in the case. Overall I feel that the Spike case is a good budget case for someone that wants to built a convenient sized rig and does not need a lot of extras. 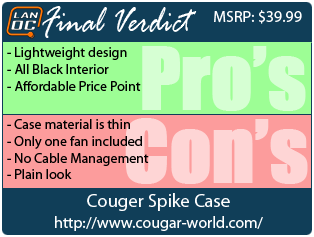 We have 756 guests and one member online