Of all of the cases we have taken a look at recently, the Raven 3 tops the charts for how many times you could make us ooh and aah. Its unique design is still impressive to this day even though it is similar to what we have seen on past Raven and Fortress cases. On top of that the interesting color combination looks amazing and frankly I am happy to finally check out a Raven case without a door on the front. All of it put together makes this one of the best looking cases we have seen in a long time. The Raven 3 also is one of the best cooling cases we have seen as well, with its large cooling fans and 90 degree rotated motherboard.

So you have to be wondering what is wrong with it then right? The old saying nothing is perfect does apply to the Raven 3 and almost all came up during our installation. I wasn’t a huge fan of the room that you are given for a power supply. Even though it is enough room for most power supplies, I imagine that the Raven 3 would be perfect for extreme quad GPU builds that might require a 1200 or 1500 watt power supply and I question how well they would fit.

On top of that the top I/O location will most likely cause issues for people who need a DVI-HDMI/VGA adapter or even people who are running HDMI. I have had multiple HDMI cables break from being bent even just a little bit on the back of a monitor, the tight space on the Raven 3 could cause similar issues. My last issue was with the location of the power plug. I really don’t think they could find a more difficult location to put a power plug. I would have loved to see the power plug into the back of the case or at least be a little easier to get to.

Having said all of that, I was so impressed with the rest of the Raven 3 that I would happily ignore the issues that I did come across just for its amazing styling and great cooling performance. After multiple years of tweaking this design I was a little disappointed to see that they seemed to create new issues with the design, but I am a sucker for its two inches of space behind the motherboard tray for wire management. If this were Jerry Maguire I would be saying you had me at the wire management. 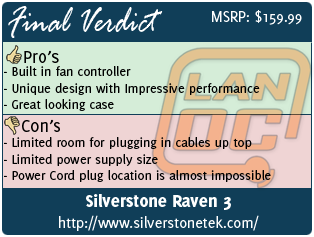 You might call him obsessed or just a hardcore geek. Wes's obsession with gaming hardware and gadgets isn't anything new, he could be found taking things apart even as a child. When not poking around in PC's he can be found playing League of Legends, Awesomenauts, or Civilization 5 or watching a wide variety of TV shows and Movies. A car guy at heart, the same things that draw him into tweaking cars apply when building good looking fast computers. If you are interested in writing for Wes here at LanOC you can reach out to him directly using our contact form.
Discuss this article
Log in to comment
Posts in discussion: Silverstone Raven 3

We have 1168 guests and one member online