The Storm series from Cooler Master is beginning to identify with a large, top exhaust fan and the Stryker shares the tradition. The 200mm, 1000RPM fan is entirely white, like the majority of those shipped with the Stryker. Two 120mm or 140mm fans could also be substituted here for those seeking higher RPM. 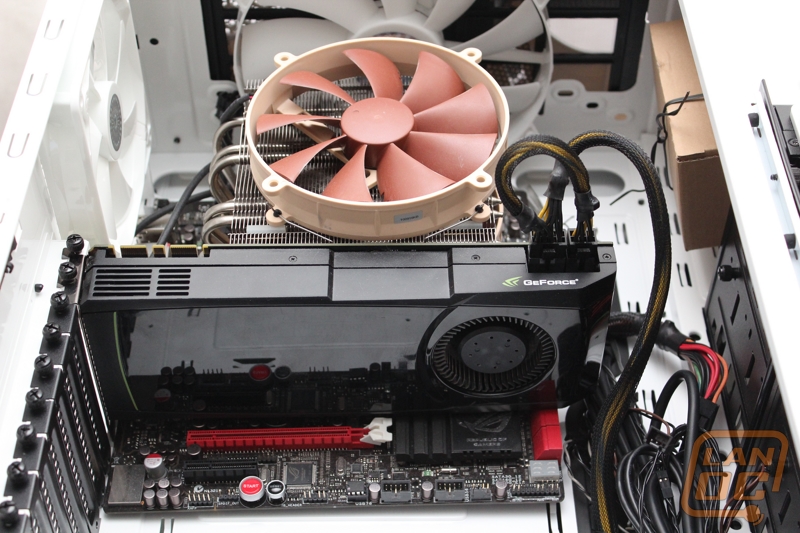 Paired with the top exhaust, the rear exhaust is also a pure white, 140mm 1200RPM fan, with the option of equipping a 120mm in its place. 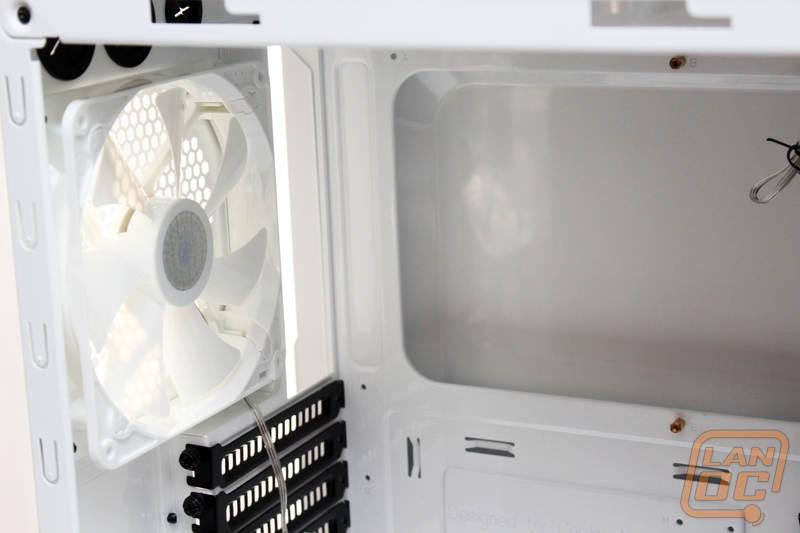 The PCI placeholders contribute to what little black exists on the interior, functioning with thumbscrews for a tool-less design. The power supply bay finishes out the remainder of the rear, and continues on to the floor of the Stryker with raised rubber runs for the unit to rest on, and give some extra elevation. This should help a little in vibration reduction since it will keep the PSU from being metal-on-metal. 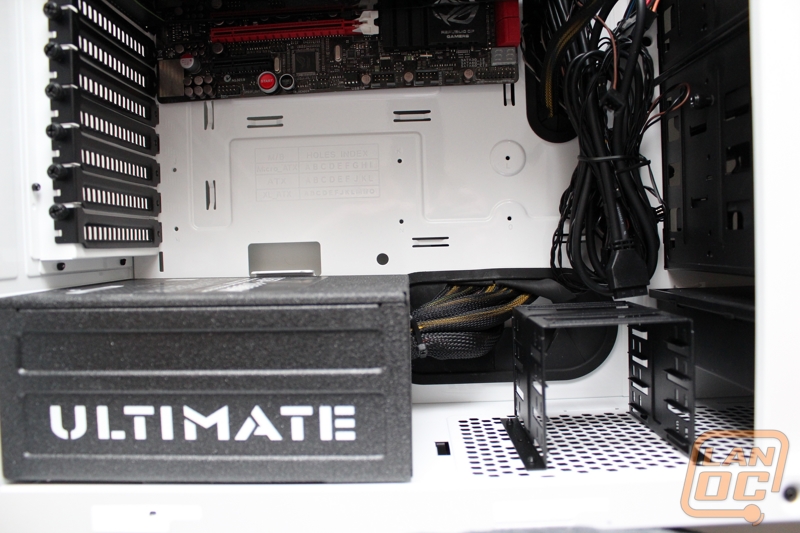 Adjacent to the PSU bay you’ll find one of many black rubber grommets, to help with cable management. The grommet for the power supply cabling is actually significantly larger than the others, since the thickest bundles will route through here. 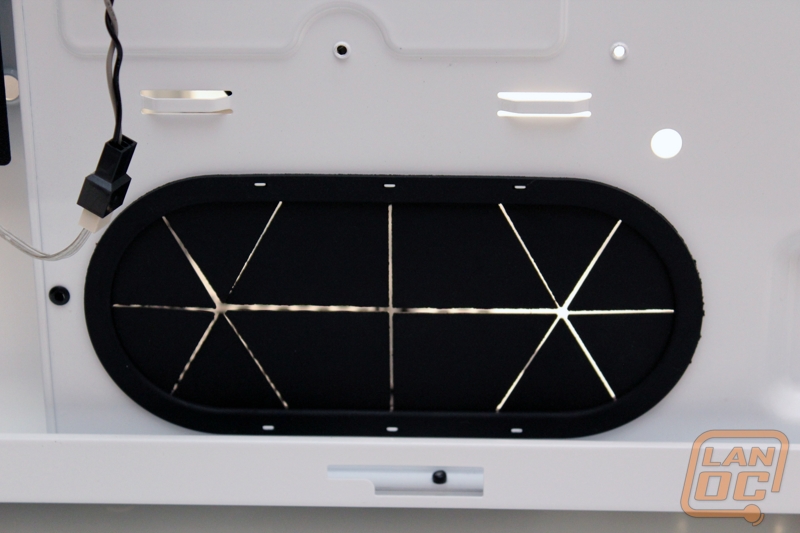 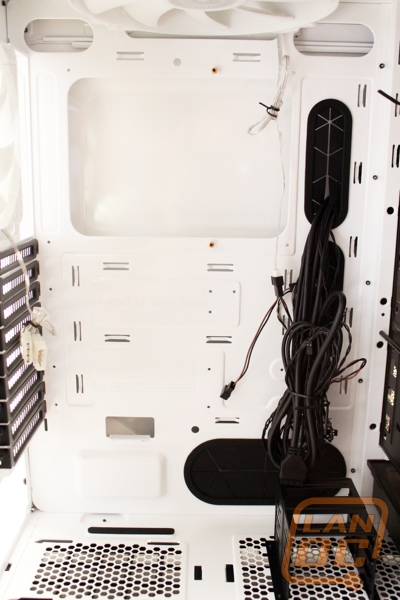 Two mesh designs mirror one another for airflow under the chassis, one for the PSU and the other under a fixture designed to mount 2.5” hard drives, which works specifically well for solid-states, since there isn’t as much airflow as the traditional bays. 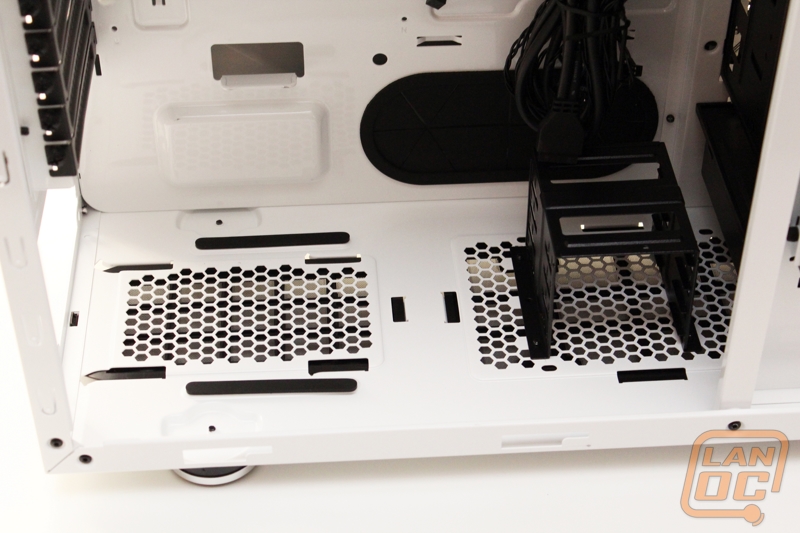 The hard drive bays are equipped with two straight-white 120mm fans also featuring a white LED to shine through the mesh on the front or main side panel. One of the unique features of the Stryker is the hard drive cages, particularly the effect they have on cooling. By default the chassis will ship with fans turned 90 degrees, to intake and exhaust from the sides instead of the traditional draw in from the front. As mentioned, this also adds a nice lighting effect for the side of the case. This setup creates a personal circulation for internal drives, separate from the flow of the rest of the case. While this benefits the drives substantially, it does cut down on the amount of external air that is brought in for the rest of the tower.

Cooler Master has designed the cages so you can rotate them back toward the front in traditional manner, and since the two cages are independent you could even combine the two styles. However, this will also rotate the SATA headers of the hard drives from facing the rear side panel (best for cable management) to being exposed in the main compartment of the Stryker, completely visible from the windowed panel. Still, if you have an empty cage, it may be a good idea to convert it into a front in-take as well. 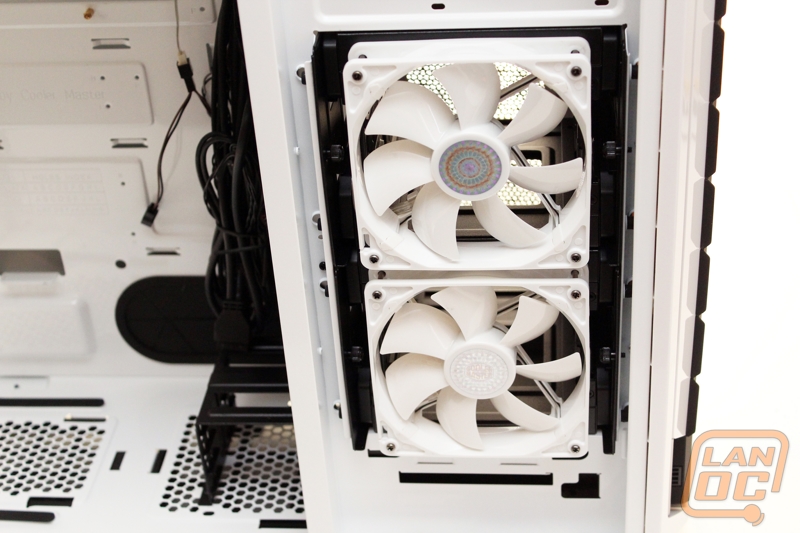 Both 1200mm fans are attached to its own four-bay hard drive cage, which can be pulled out while the fan is attached. The hard drives can be mounted tool-less using rail systems included as accessories. 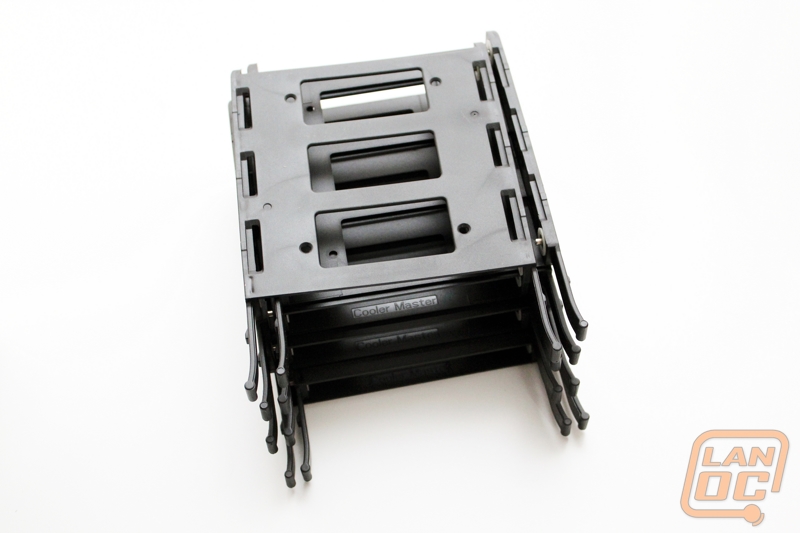 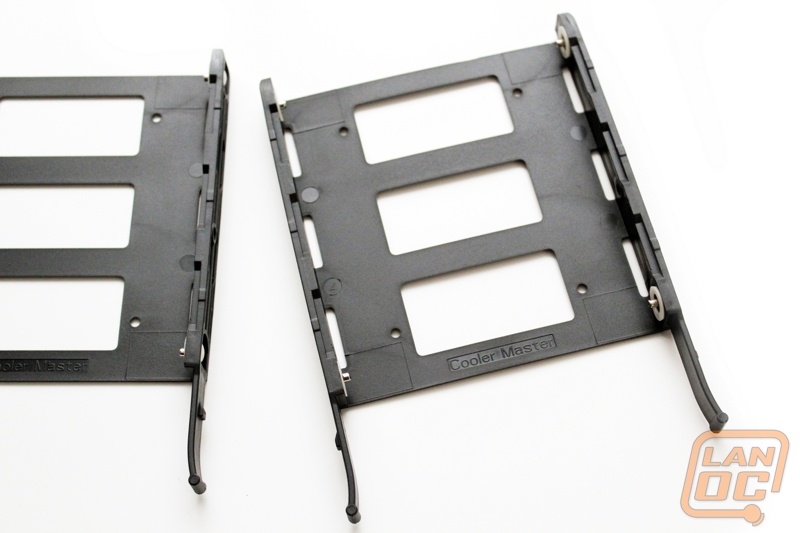 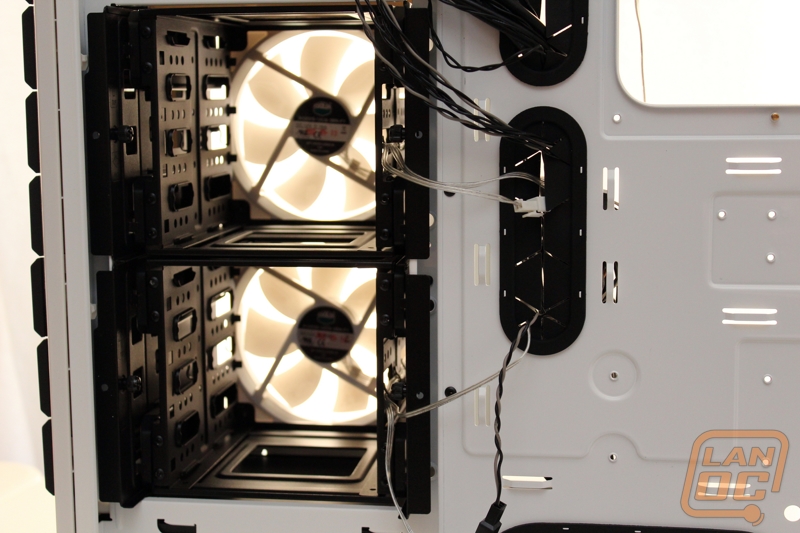 With several grommets and installed fans already routed nicely, cable management in the Stryker shouldn’t be too large a chore. It is becoming more common to leave extra space behind the motherboard tray for cabling, as Cooler Master has done here, scoring around 1.25”. 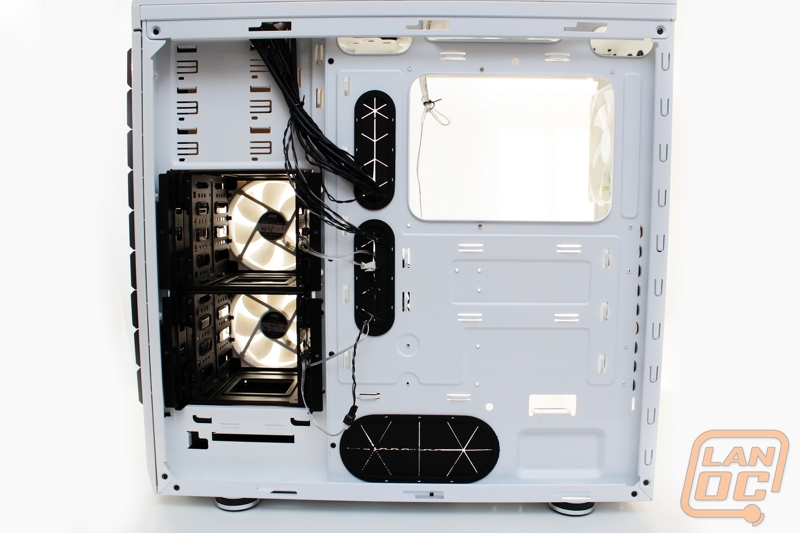 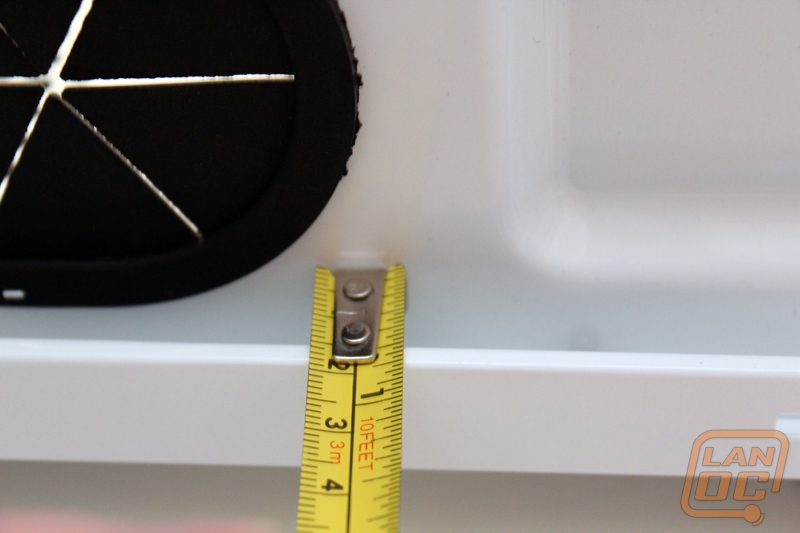 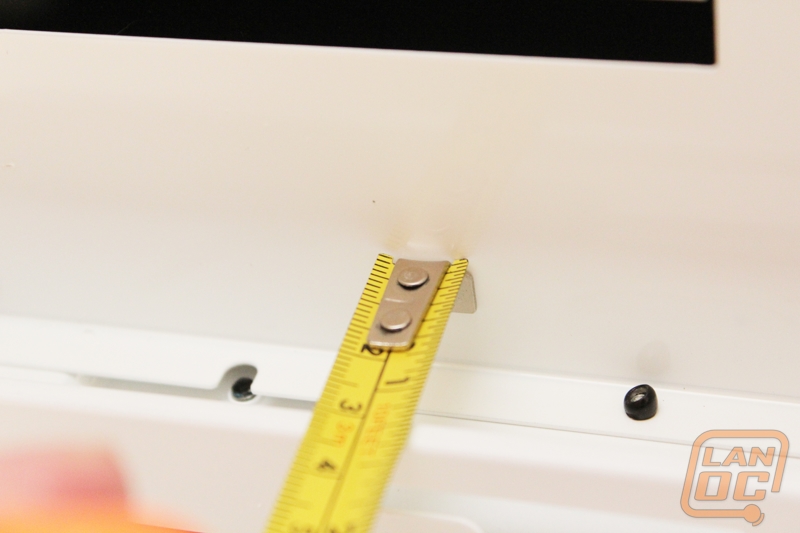 Probably my favorite feature is what Cooler Master calls the ‘internal tool box’, which is where you’ll initially find the included accessories package.  Accessible from the front via thumbscrews, this draw finishes the bottom corner of the Stryker with a drawer to store items in. This is a great feature especially for LAN parties. 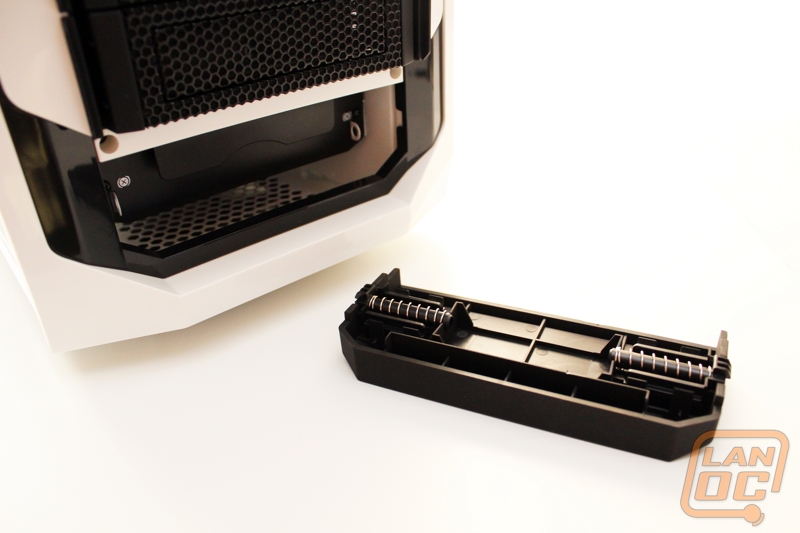 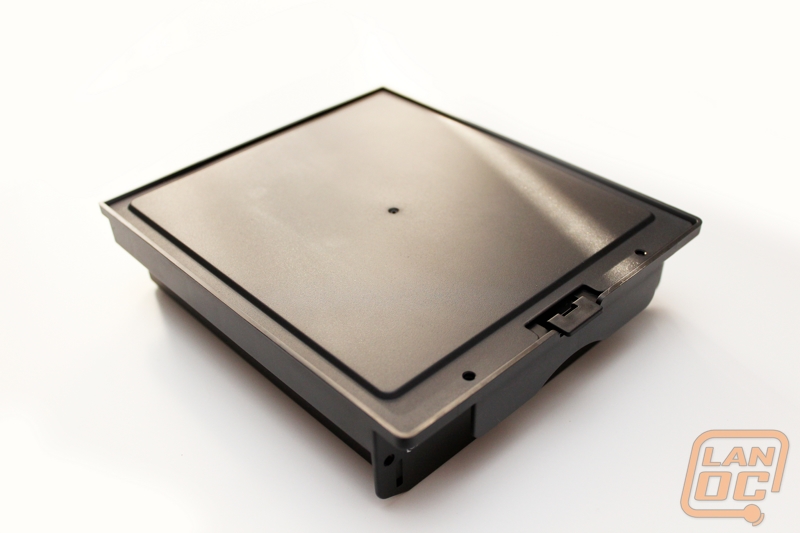 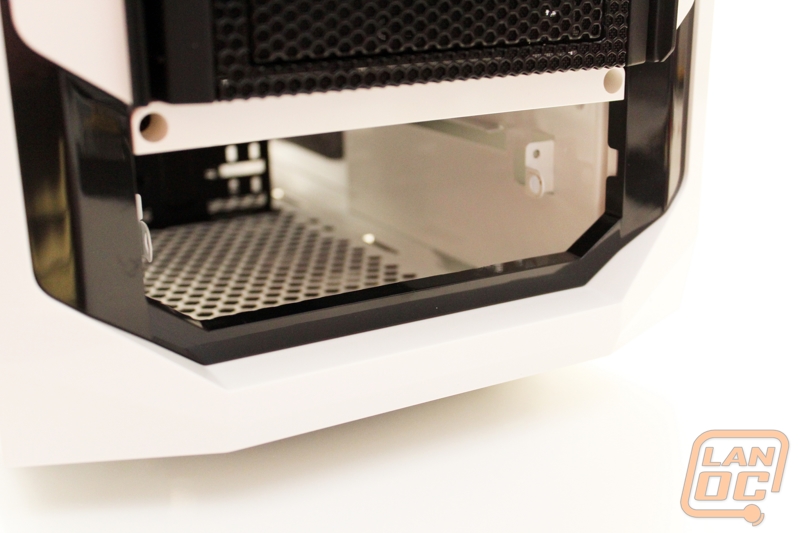 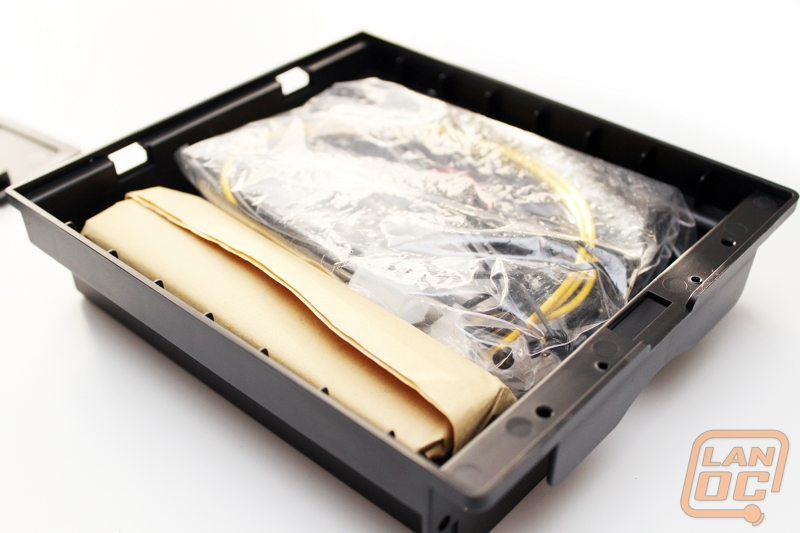 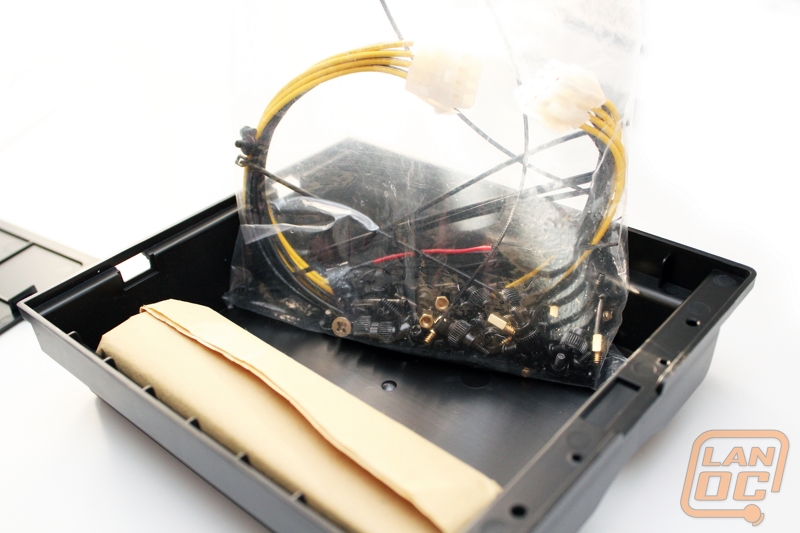 Since the Stryker is a full tower, you would expect support for high-end enthusiast hardware, which Cooler Master has lived up to. Extended components, such as power supplies and video cards, should have no problem fitting in, though with such a nice black and white theme, you may want to put some though into matching colors. 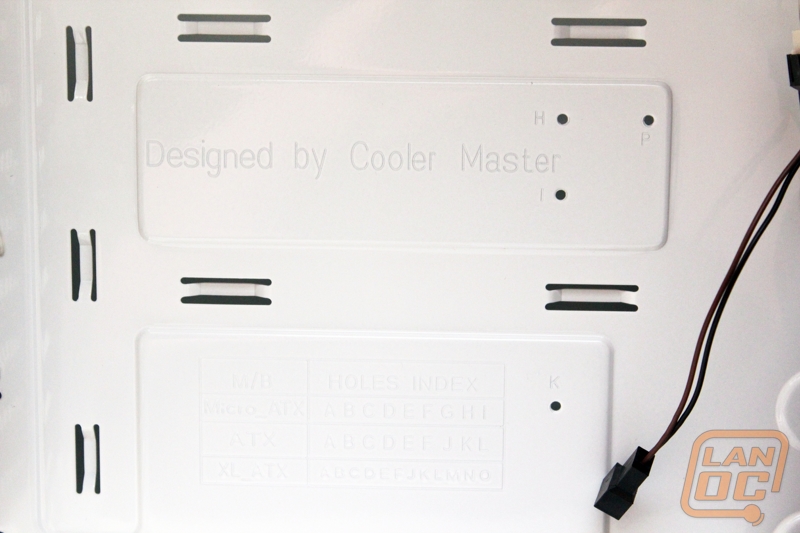 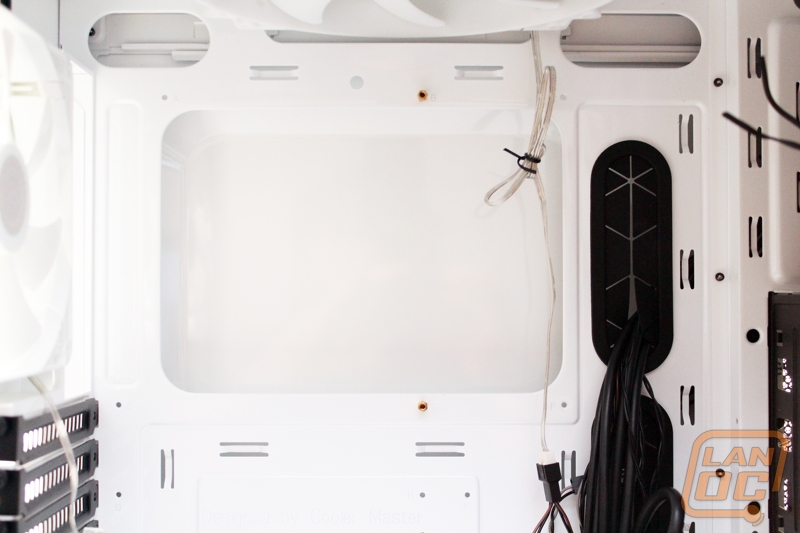