Exterior
I’ve had a hand in many of the In-Win cases we’ve reviewed in the past, something that holds true is the amount of personality each has. It’s usually pretty easy to point out a BUC or a Maelstrom at a LAN party. The GR one has the same distinction. Our particular sample stands out because of its unique color, metallic grey. It’s a darker color, a deep onyx that achieves the same benefit of black while preserving some personality. 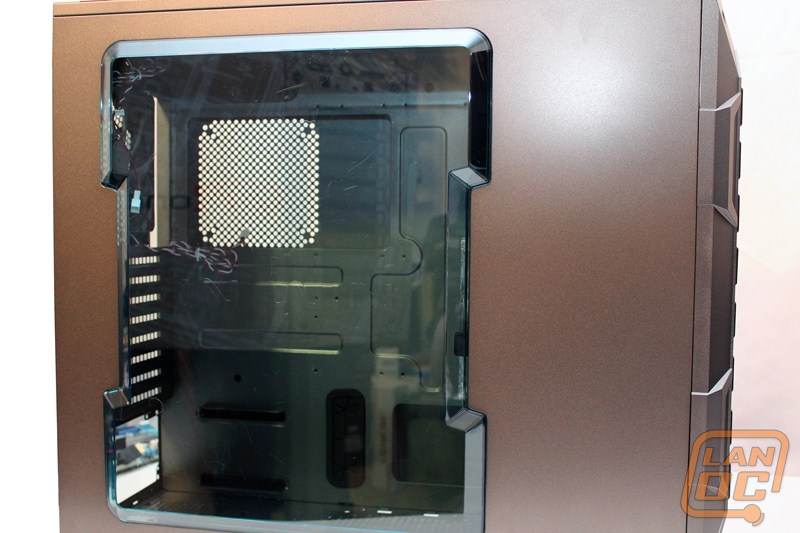 The front design especially sets a lot of the tone for the chassis, a promoted front panel design with emblems resembling the head of screws in the four corners. Though it appears the entire front is made from external 5.25” drive bays, in reality only the top three are removable for that purpose. The remainder functions as a filter system for the internal drive bay fans, which is removable as one complete piece instead of individual placeholders by pressing in near the top to release the piece. These are installed with red LED fans from In-Win for a front glow effect. The individual drive placeholders are very simple to remove, pinching together buttons to release tabs within. 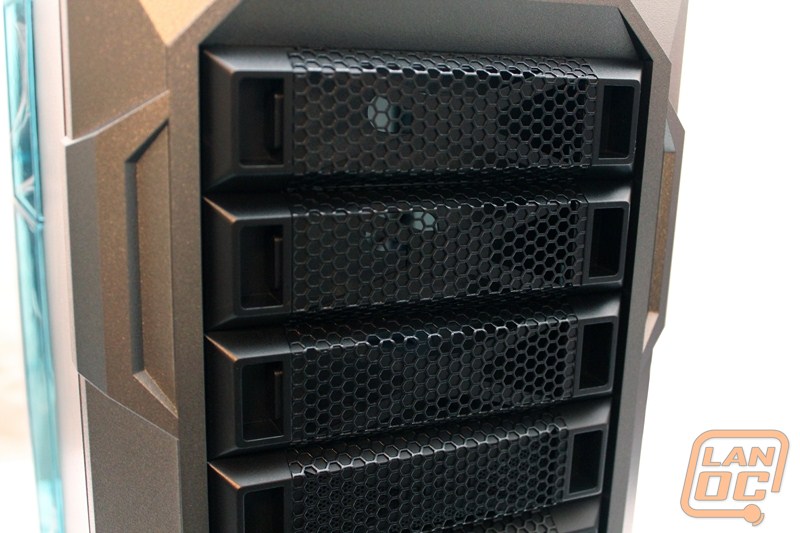 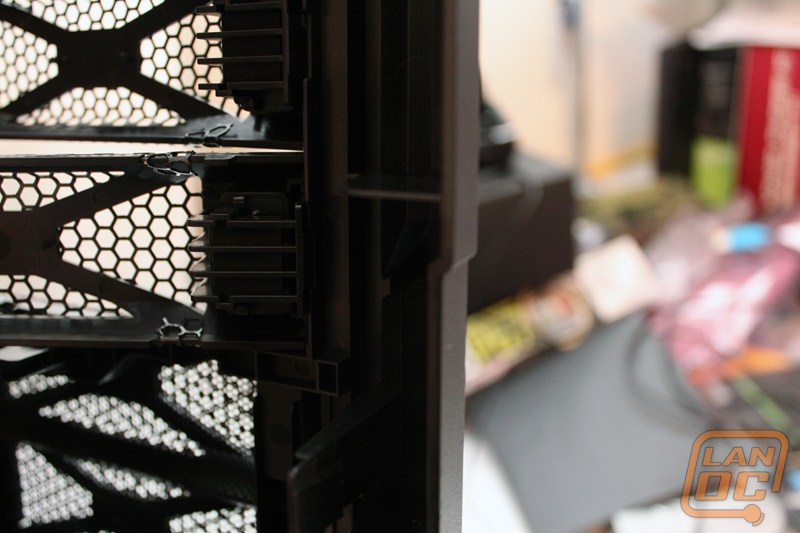 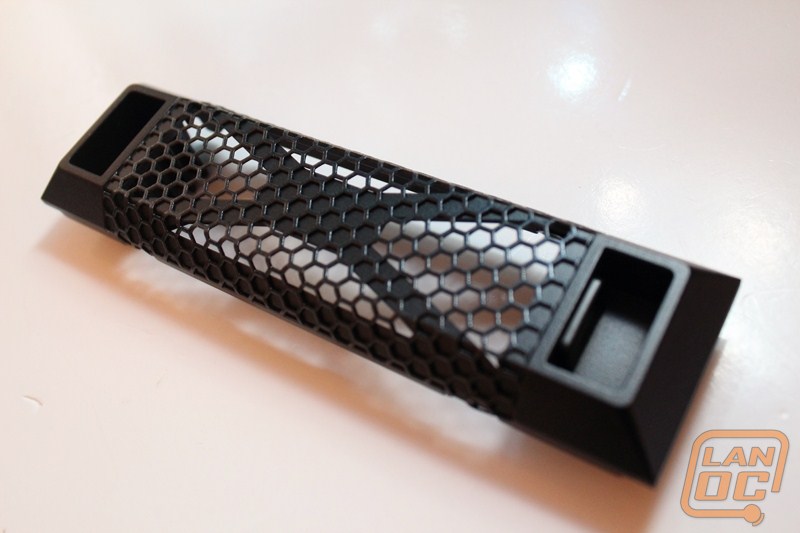 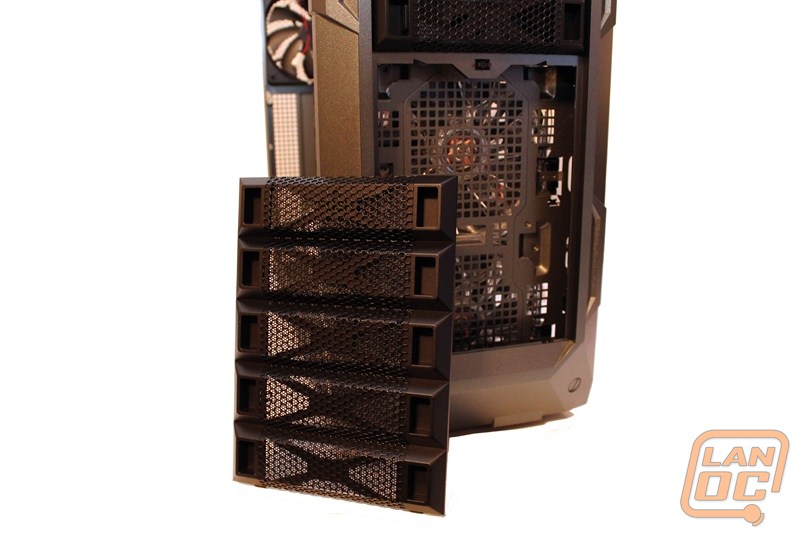 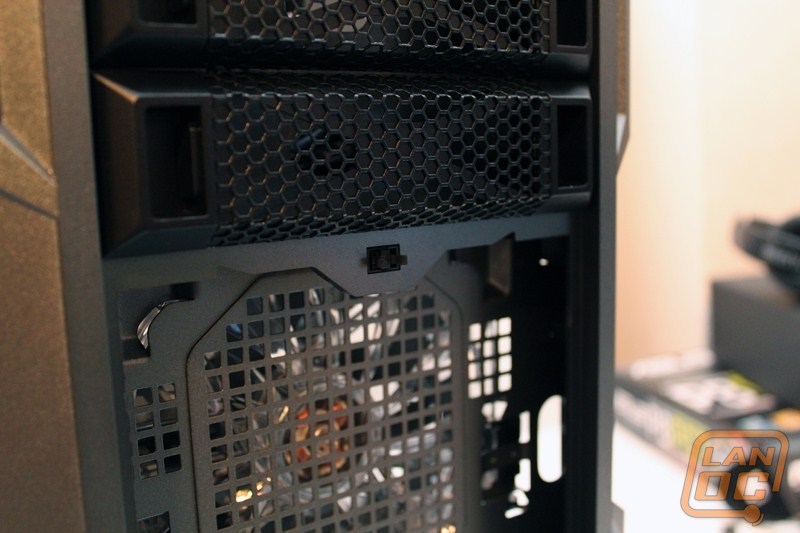 The front I/O sits above the front bezel, equipped with two USB 2.0 and two USB 3.0 ports, audio and microphone in, and the power button. On the left side is a ‘wing’ with the Reset and HDD lights; while on the opposite side is a turbo or silence mode switch for fan control. 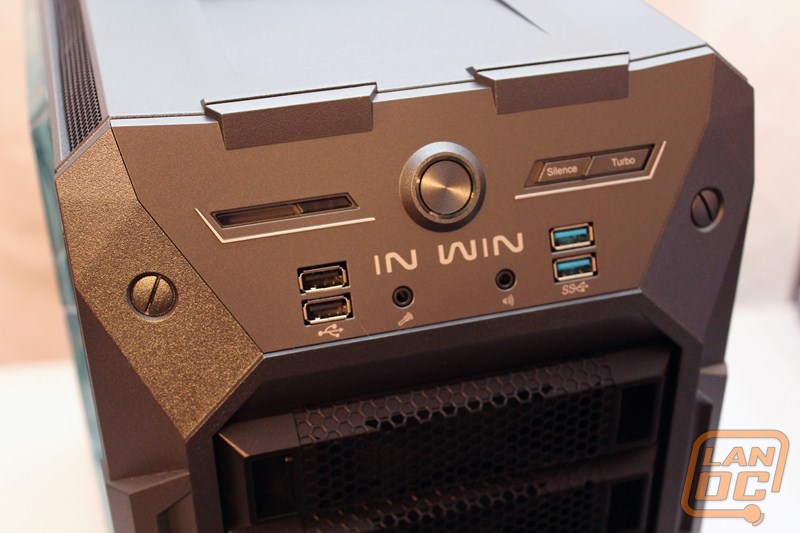 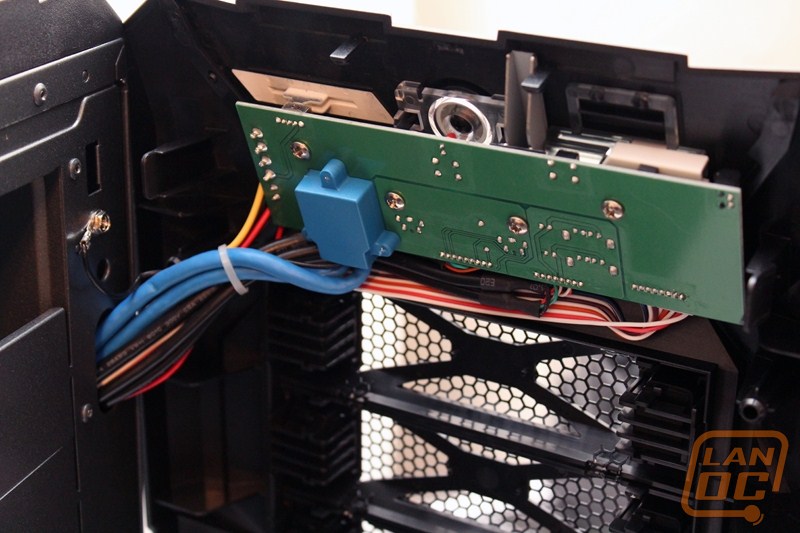 This rolls over to the top of the case with an ‘EZ-Swap’, or hot swappable bay for use with either 2.5” or 3.5” drive. The remained of the top is an incline that eventually overlooks this external bay, crafted with a mesh panel design for venting. The design also allows for an internal 360mm radiator to be mounted, or an alternative of three 140mm fans. 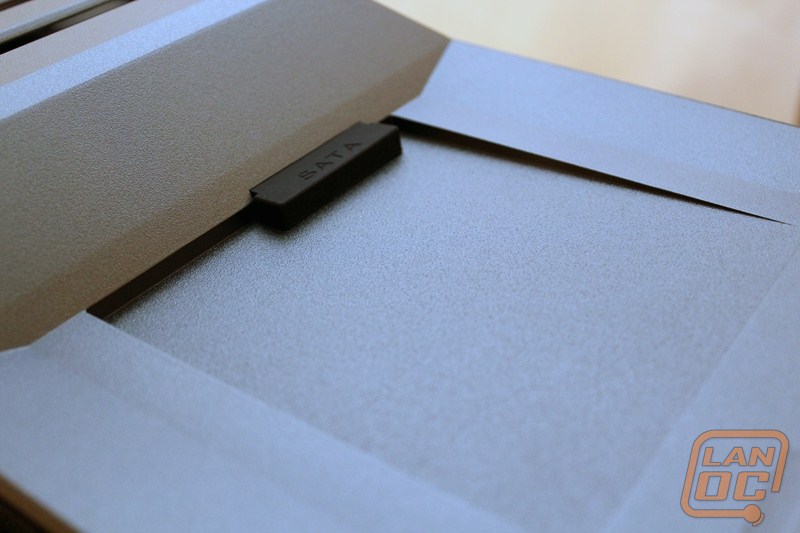 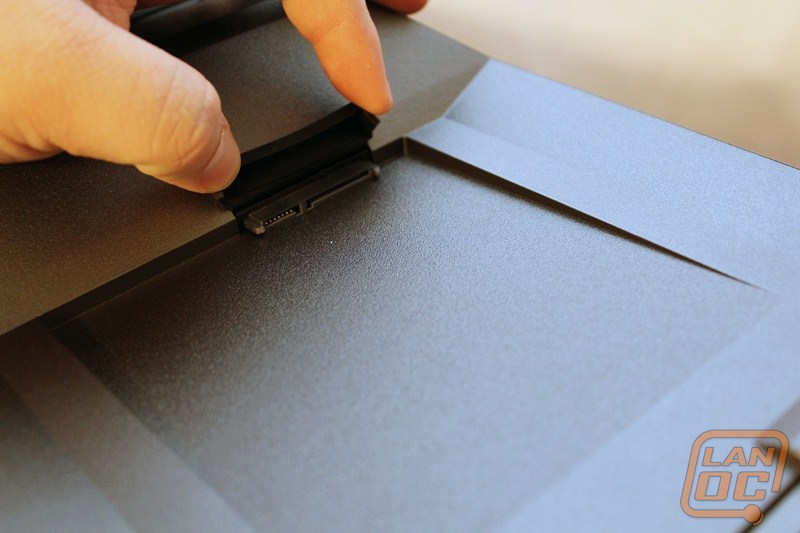 Four grommet holes line the top of the rear of the GR one, above the rear I/O and 140mm exhaust fan.  PCI slots run the rest majority of the backside, with thumb-screw secured placeholders, vent slots for airflow. The PSU cutout finishes out the back. 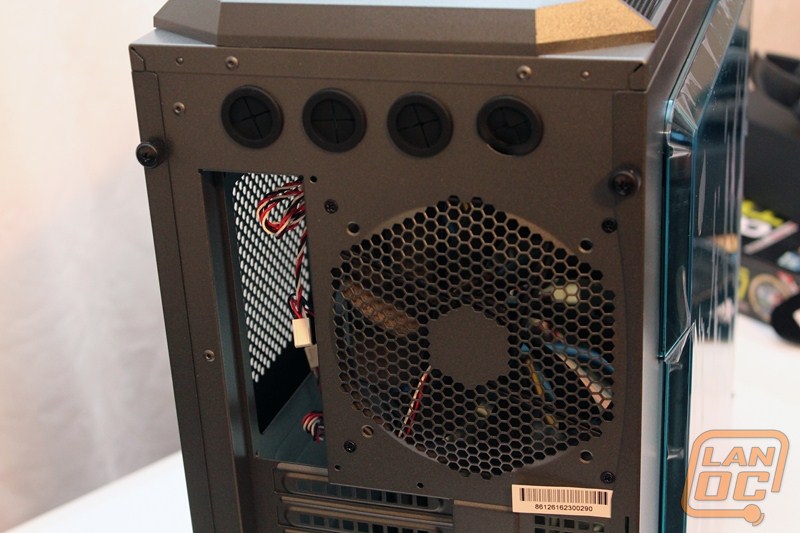 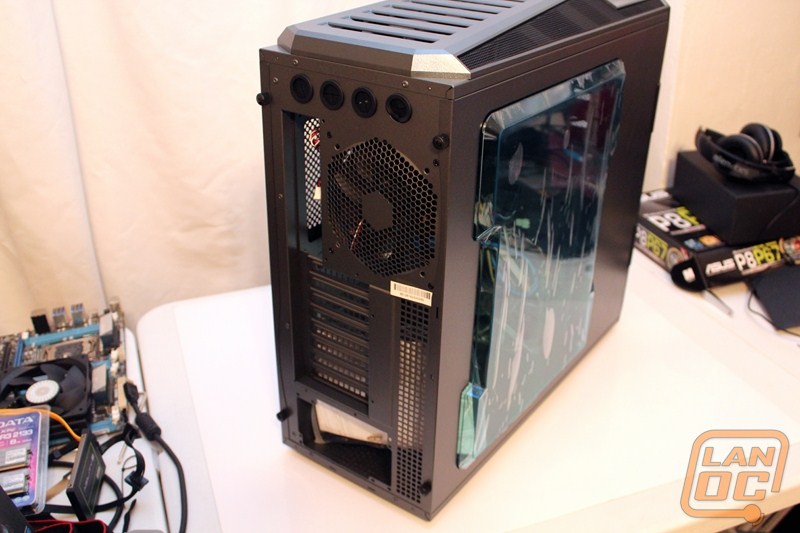 The bottom of the case features plenty of breathing with vents back to back under the hard drive bays, interior bay fans, and then another vent area under the power supply bay. Misleading feet are situated longwise in the four corners lifting the case off the surface. They look like they should pivot out to the side for stability like we’ve seen on larger cases, but are very stationary. 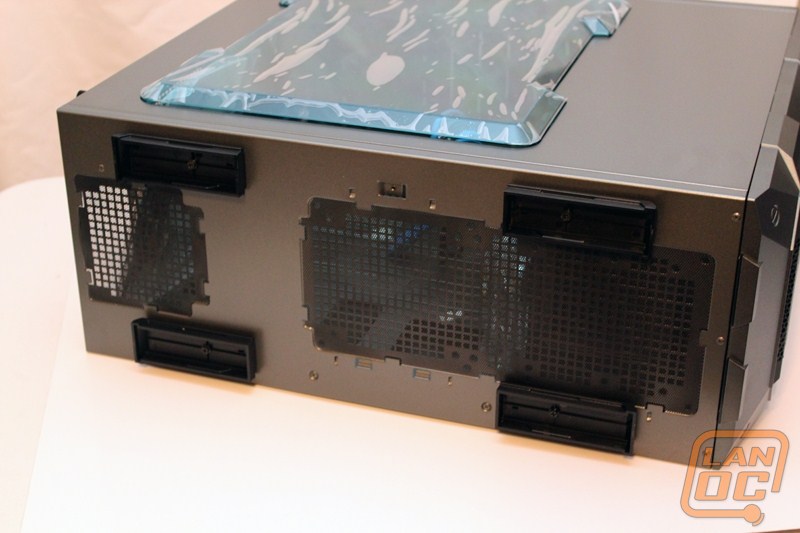 The main side panel houses a transparent window that stretches to approximately where the internal drive bays begin, allowing a little hiding space for cable management while showing off the hardware inside. Depending on the flavor of the GR one, the window may be a small variety of colors. 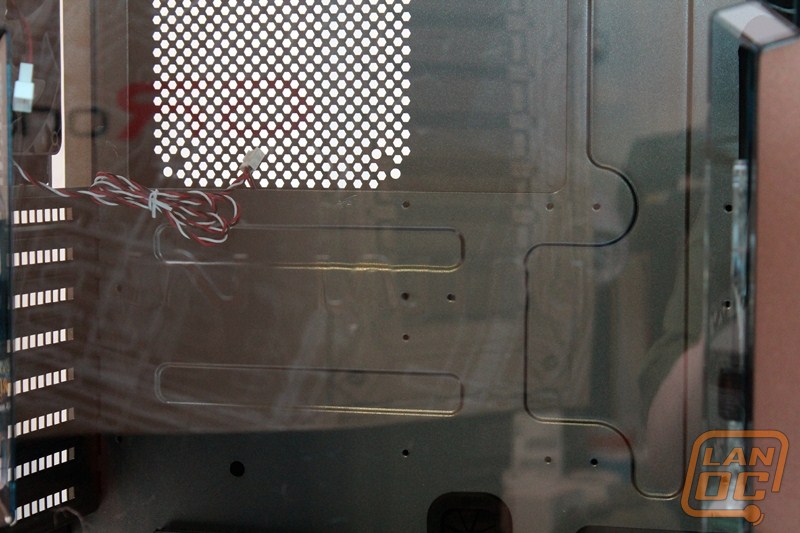 The opposite side panel features the rear CPU fan option allowing a 120mm or 140mm to be equipped. We’ve seen this a lot lately, one of the largest benefits perhaps is that it causes more open space between the side panel and the rear of the motherboard tray. 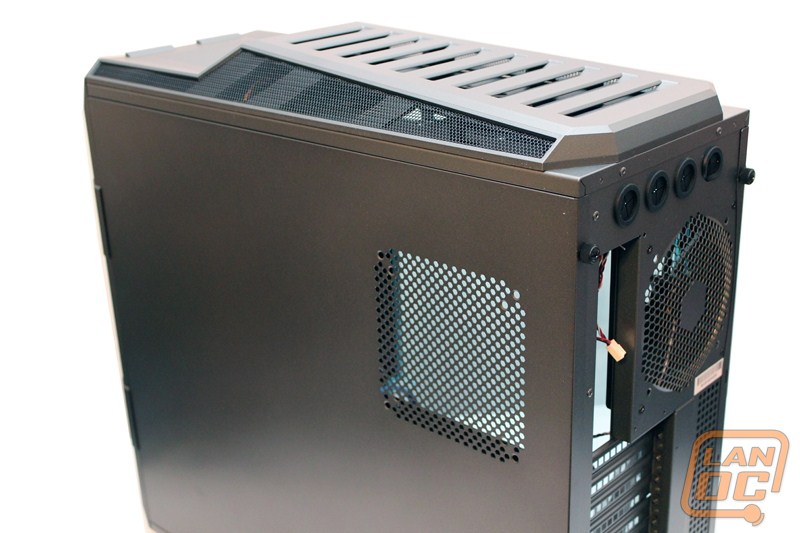