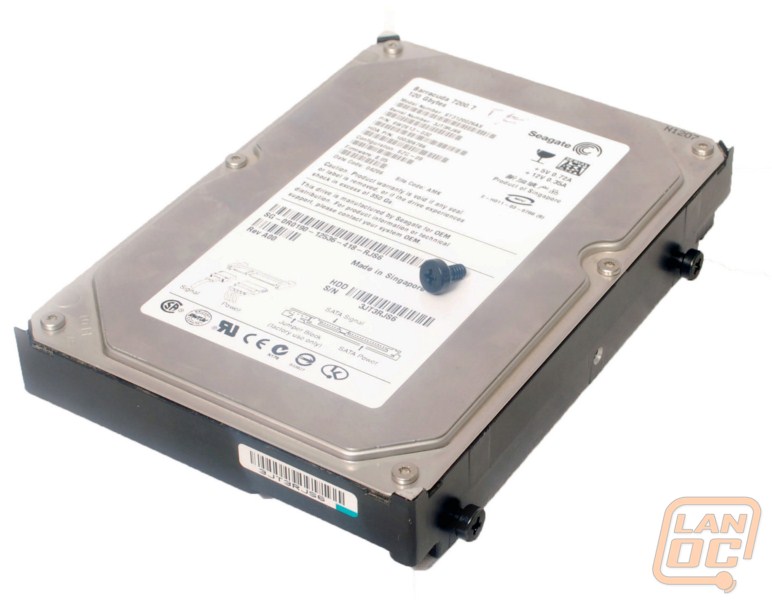 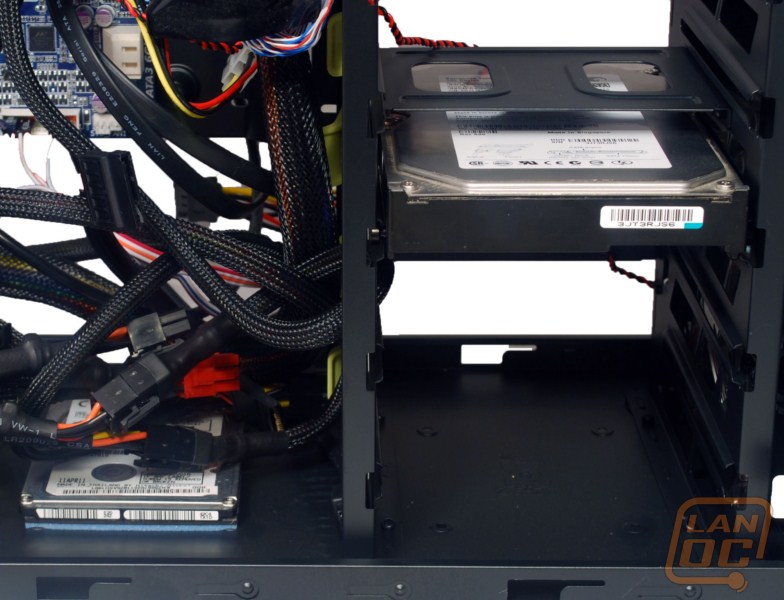 The 3.5” drive retention system is odd. I couldn’t decide if I disliked it, but I certainly didn’t like it. The drives were installed by adding four screws to the hard drive and the screw heads slid into the rails and clipped in. It works, its secure, but a bit more manual than one would expect. This is actually the same design that HP/Compaq used on their personal pcs 5+ years ago, I think In Win could go with something a little more current. The 2.5” drive support is there, but this is another area I really wasn’t satisfied with. There are two different locations on the bottom of the case (screwing in from the outside) where 2.5” drives can be mounted. This makes it a pain to attach the SATA and power cables. At the very least there should have been a raised portion to set this off of the ground, or some sort of vertical placement. Make sure to account for this when purchasing your SATA cables. 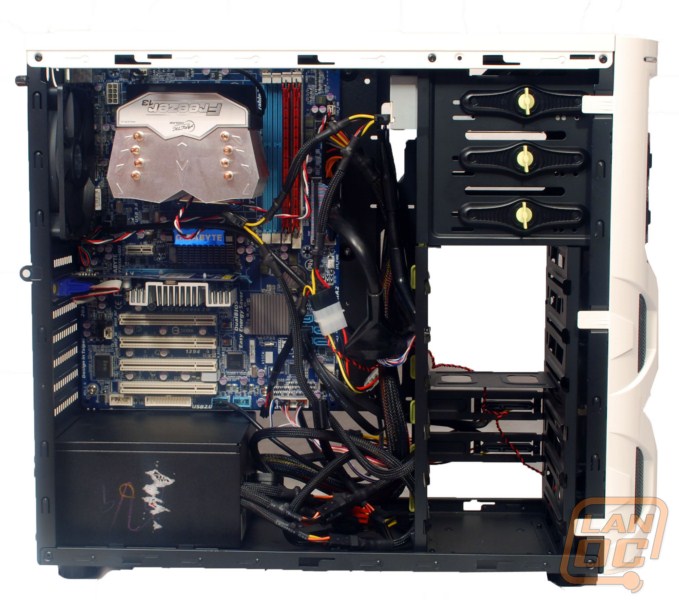 The rest of the install was extremely quick and easy. The accessory kit came with 3 standoffs, but I wasn’t completely sure what for. At first I didn’t pay attention and thought In Win didn’t include all of the standoffs, but on closer look those bumps I mentioned earlier are the correct height to install the mainboard. This is something I don’t see often enough. It is a simple enough trick, but cutting out the need for traditional standoffs makes installs go quicker and easier. 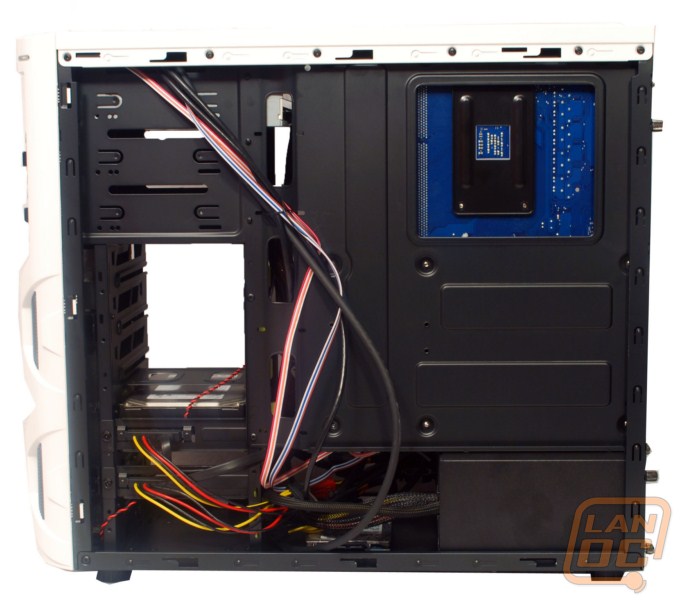 There is plenty of room for additional drives, but it will be important to remember that in a mid-tower case space is limited. The depth between the side panel and the mainboard isn’t as deep as we have seen in some other cases, but pretty typical of the class. 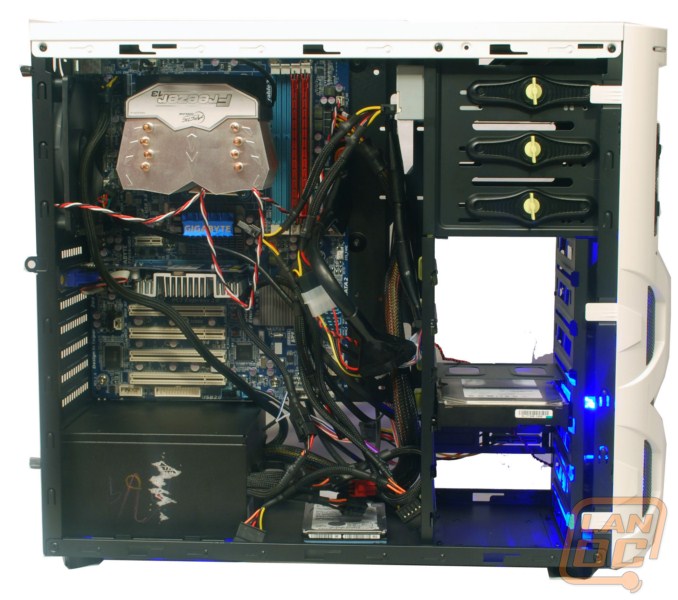 Finishing the install by powering it on I did come up with a couple of other notes. With the large tower style CPU cooler it wouldn’t have been possible to add in two 120mm top fans, nor would it really have been needed. One single 120mm side fan could have been added, but wasn’t really needed with this setup. 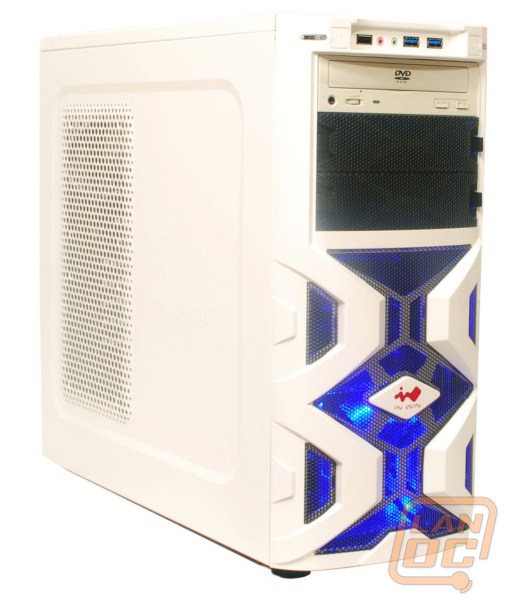 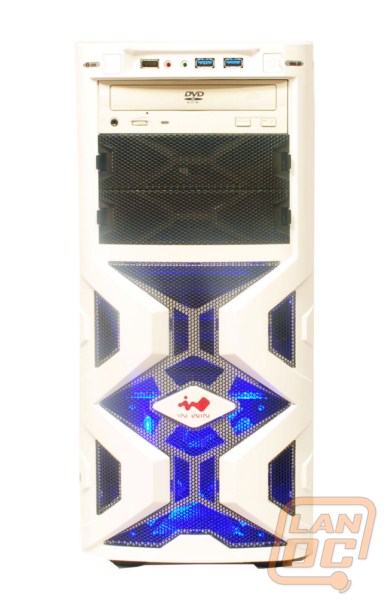 Closing it up and taking a look, the single 120mm blue LED fan gives a pretty neat effect coming through that black mesh and offsetting the white. The beige DVD drive works, but a straight black one might have looked better with the mesh bay covers. Looking online I didn’t really turn up any DVD/BluRay drives with white fronts, which further reinforces the black drive idea.

We have 1161 guests and one member online