First let’s just address the elephant in the room.  The Agusta is a aggressive case by anyone’s measure. Just taking a look from this angle you can see that no part of the case looks anything like anything else on the market. Size wise this is what I would call a tall mid tower case. The White and black styling get your attention right away. Let’s take a look at some of the details on the overall outside of the case. 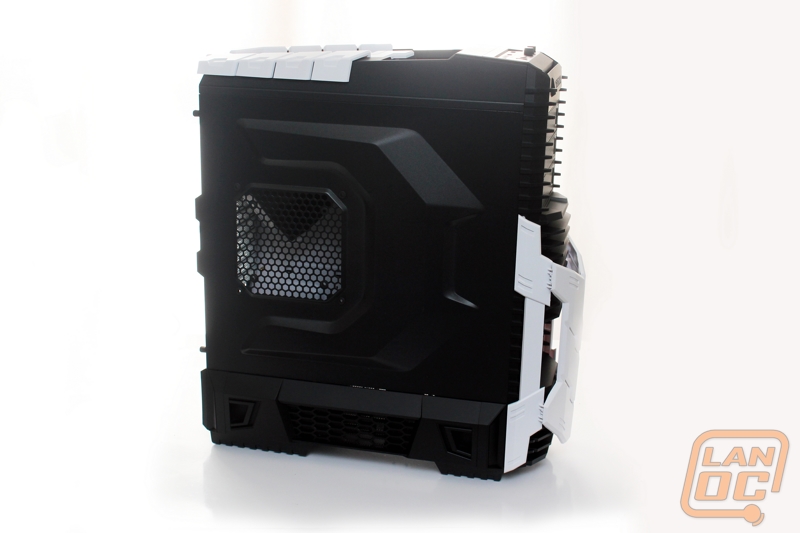 Starting on the left side at the bottom, this plastic section extending off of the normal metal case is interesting. I actually had to take a double take the first time I saw it. I had no idea that there were two handles on the left and right side that allow this to open up. In between the handles you also have a nice mesh ventilation to keep its contents cool. We will take a look at the inside in our next section though. 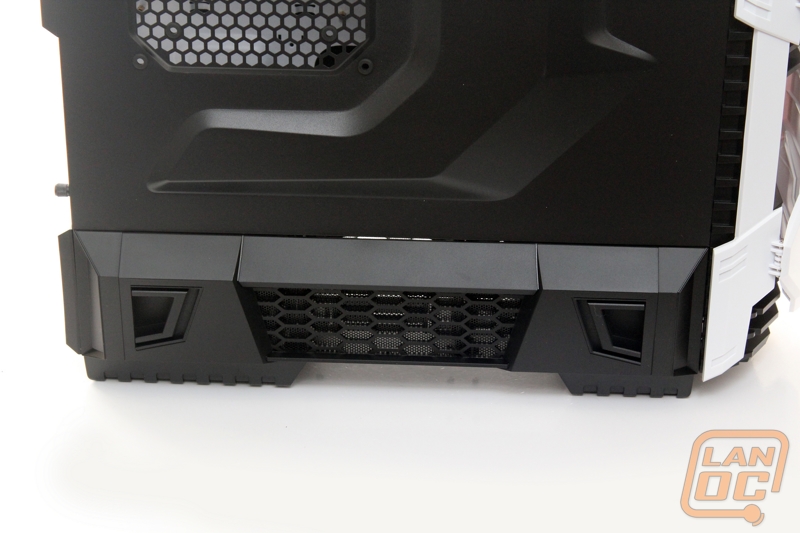 The side panel is far from flat like you would normally see. On top of that you have a vent that will support a 120mm fan or a 180mm fan. Even without a fan it is providing extra ventilation though. 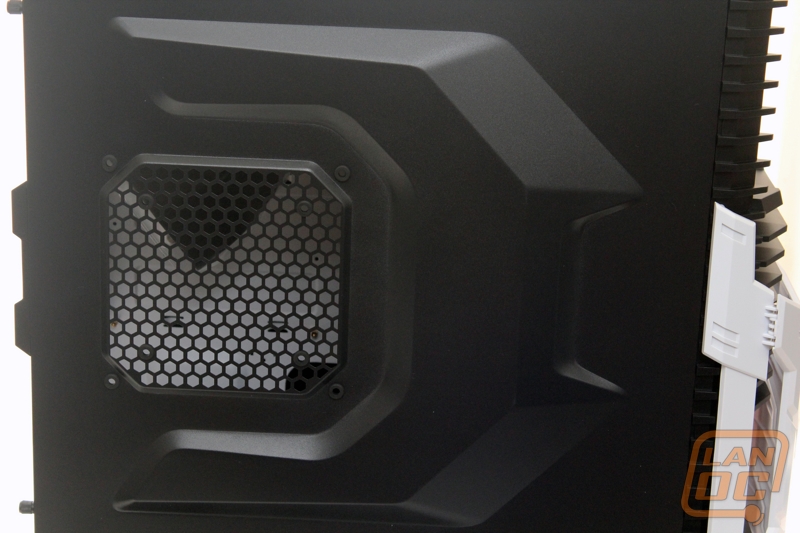 Up top we have what can only be described as an exoskeleton covering up a large vent on the top. If you look close you can also see a large handle. I was a little worried about using this because it wasn’t a feature listed on the box. Normally when this is the case something like this looks like a handle but turns out to be the easiest way to scatter your brand new pc across the floor in the quickest way possible. After testing it I can say that I had no issues with using this as a handle, but I would still be VERY careful. 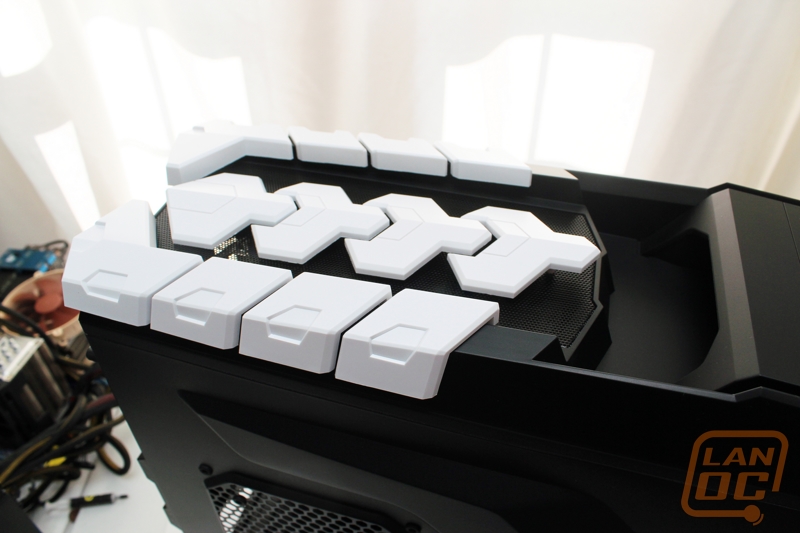 Also up top are the front control panel and I/O panel. You get two USB 2.0 and one USB 3.0 ports along with both microphone and headphone ports on the front I/O. Of course you get power and reset buttons, but there isn’t anything special here, simple plastic buttons. The power LED and hard drive activity LED’s are very unexciting as well. I would have preferred they did something a little better looking myself. You also have two matching knobs, one for fan speed and the second for lighting brightness. 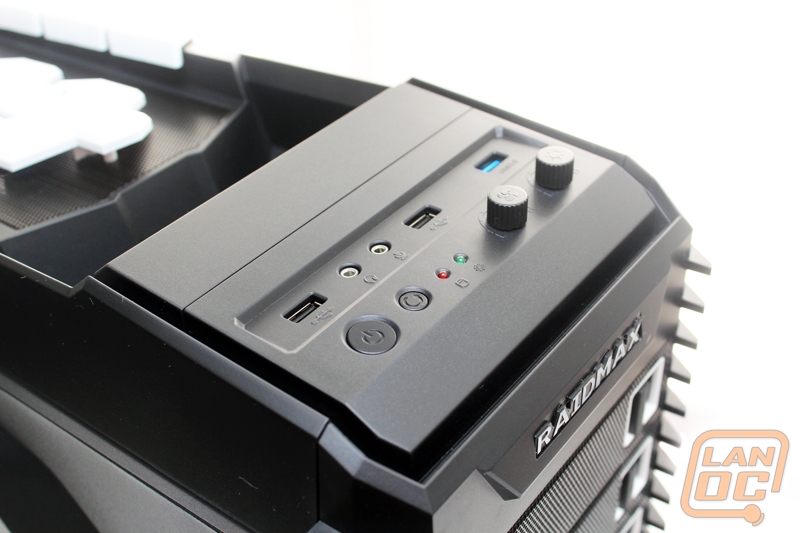 For front bays you have a total of three to work with so things will get a little tight if you plan anything like a dual bay res for your water-cooling, but its more than enough if you might just need to install a DVD drive or two. There is another way to go, but we will cover that soon enough. Raidmax included a small touch of white around the built in latch that lets you remove the bay covers right from the front. Around the bays you can also see some of the Agusta’s aggressive styling with what I would almost call fangs on each side. 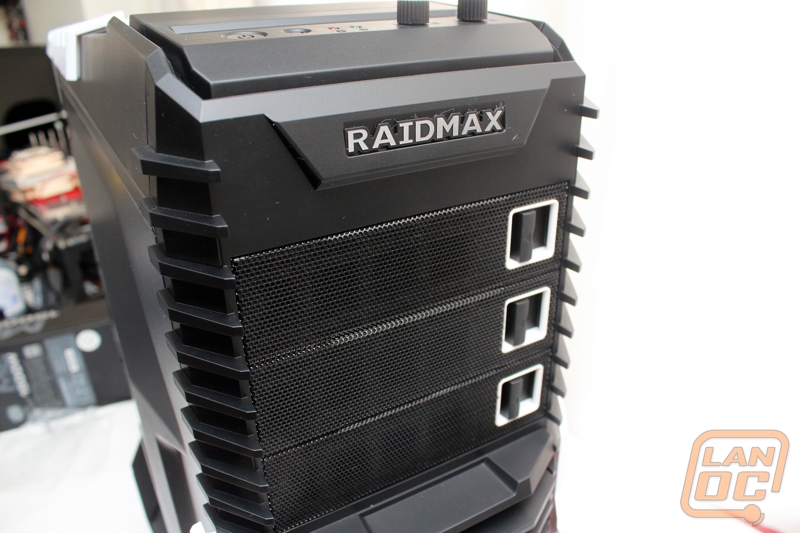 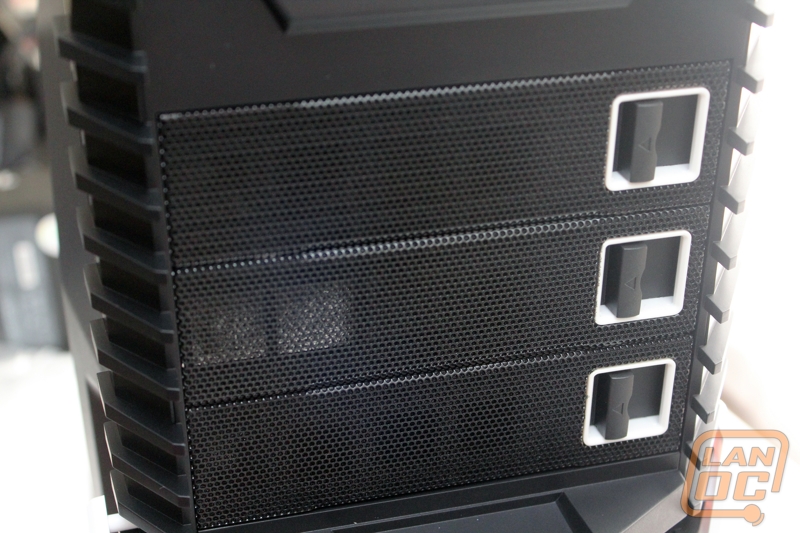 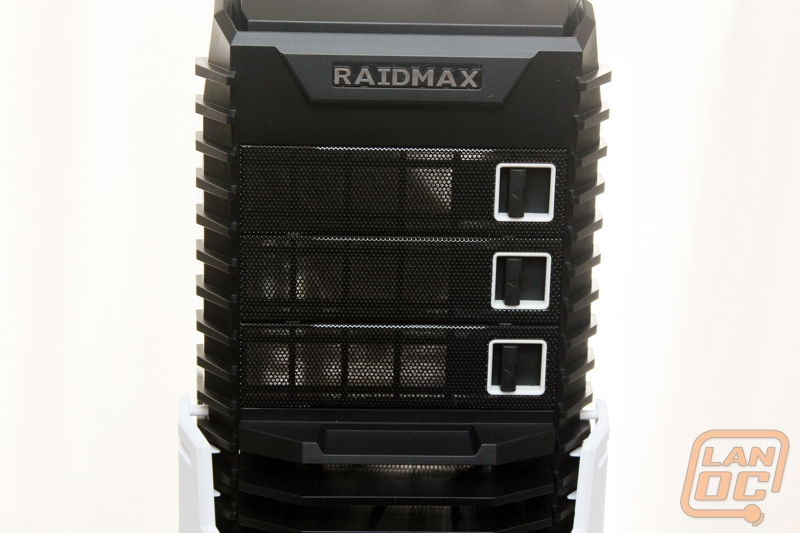 The bottom half of the front is where you can really see the Agusta’s “Gundam” styling. In a weird way it almost looks like the Transformers logo as well. This is the largest portion of white on the otherwise black case and it doubles as a door. Behind the door you have two more 5.25 inch drive bays hidden away from normal view. This is perfect for fan controllers, water cooling, and other rarely accessed devices that you might need to install. 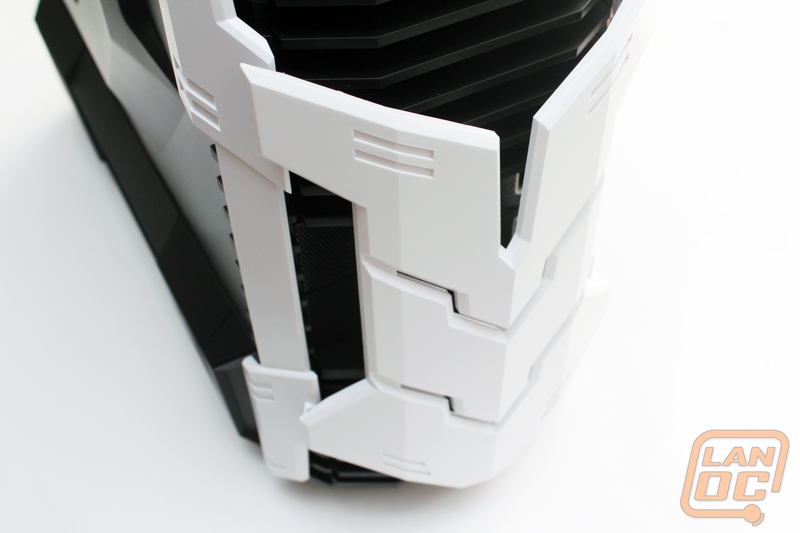 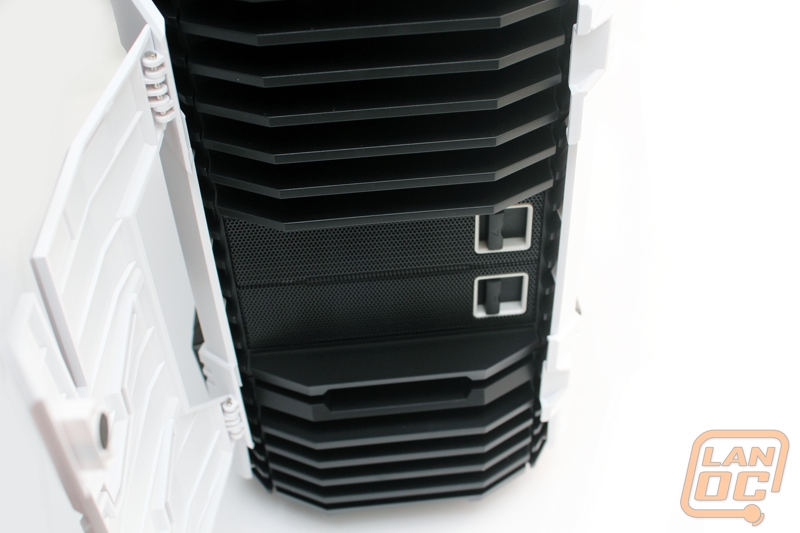 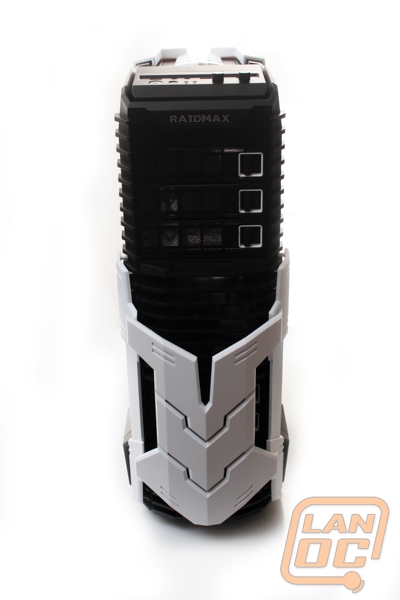 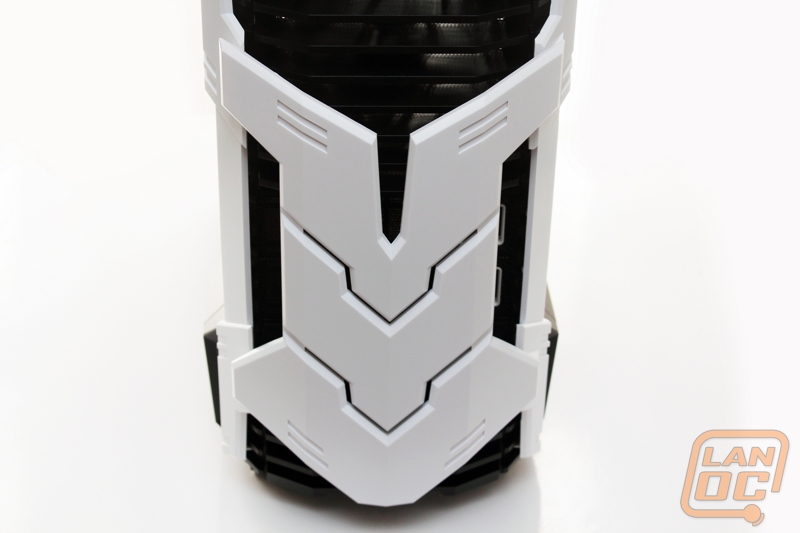 The right side of the case has the same aggressive styling as we found on the left side including the bottom door on the bottom section. The only thing different at all here is the lack of a fan vent. 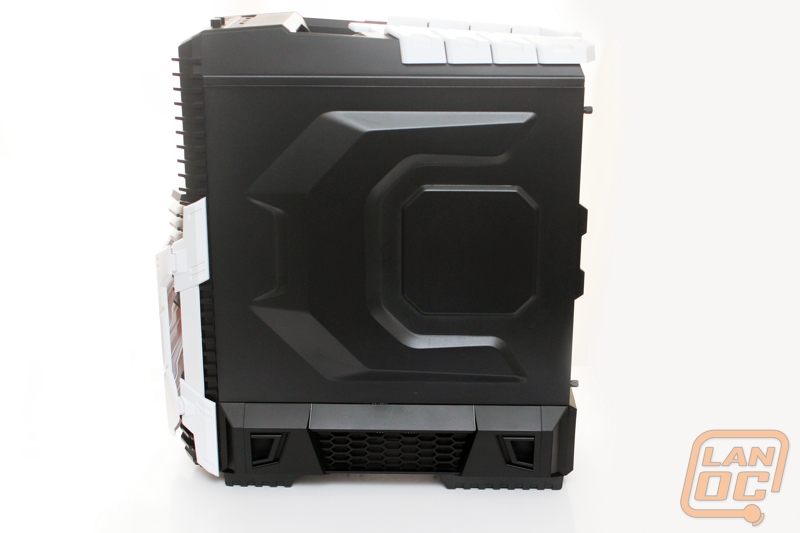 Around back you have a touch more white on the PCI slots with the rest being black. Above the rear IO they have packed in a full 120mm fan vent. The White PCI slot covers are all vented as well as vents above the PCI slots. Along with the vents above the PCI slots you also have four grommets for water cooling. The power supply is bottom mounted, but as you may remember there is an addition to the case on the bottom so the bottom mounted power supply looks a little high up on the back. Both side panels are held on with thumbscrews but also have handles built in that fold down to move out of the way. Last but not least on the back of the Agusta, the bottom section has vents all the way across as well. 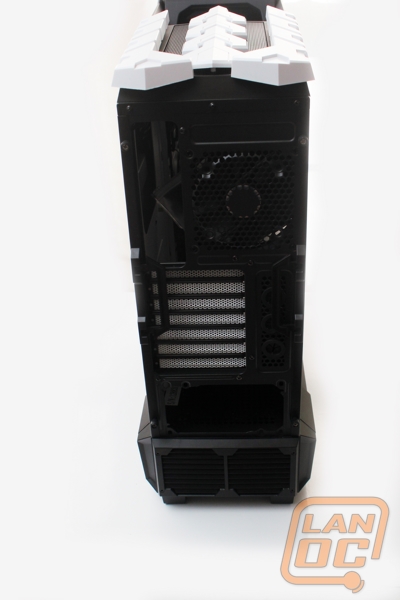 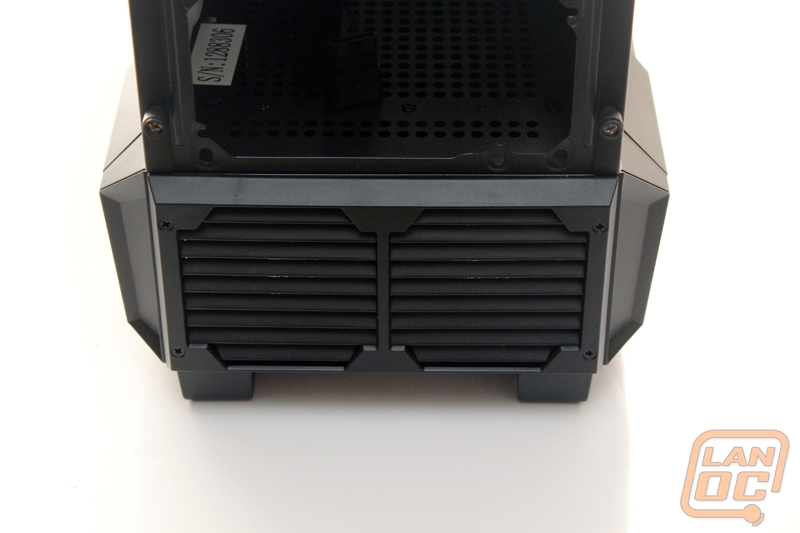 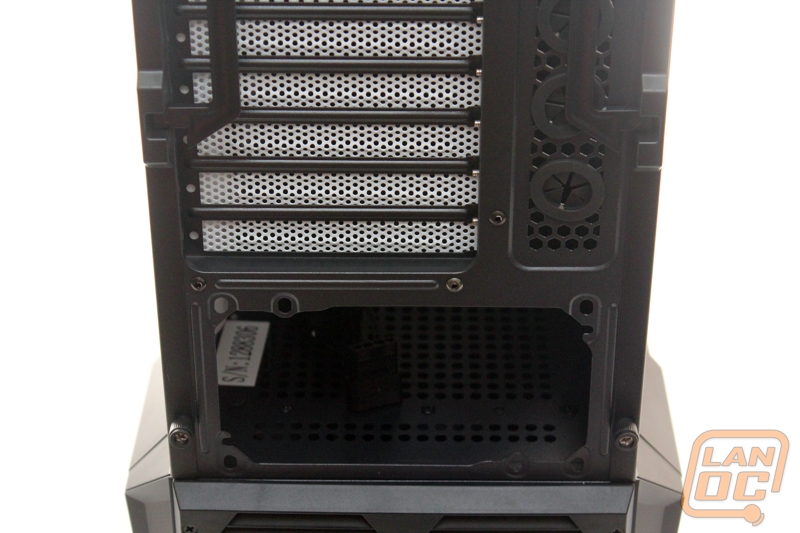 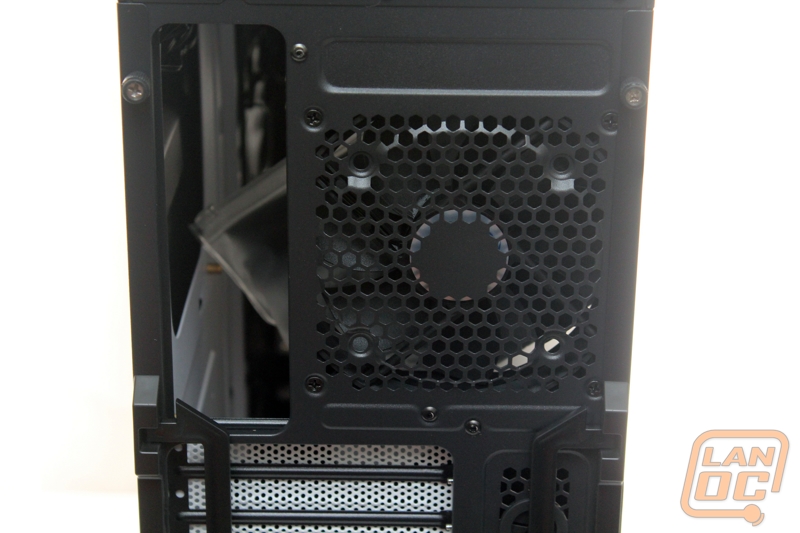 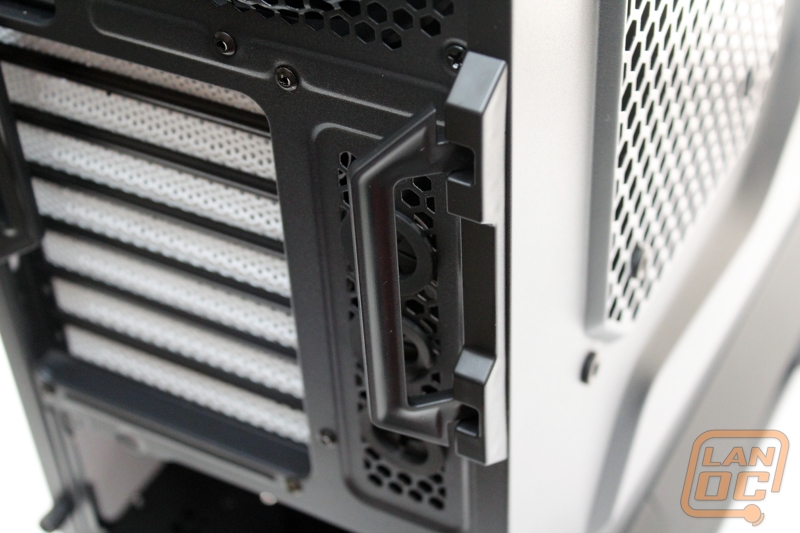 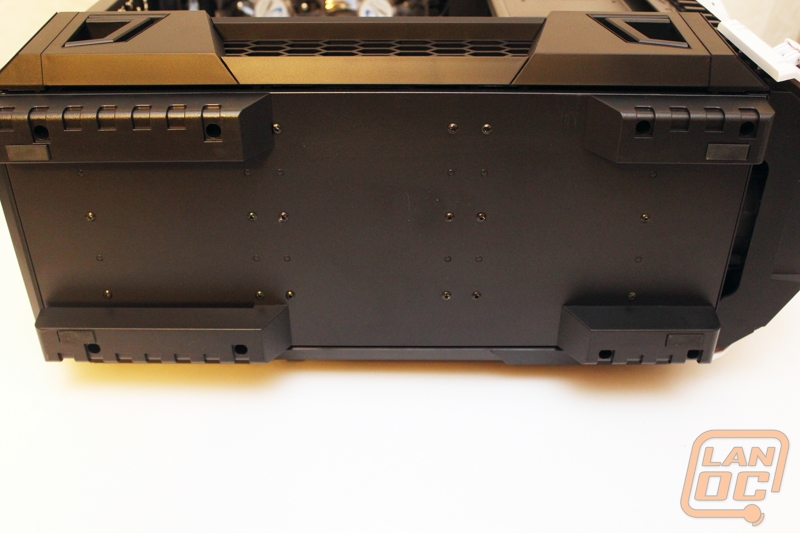