Interior
The entire interior in finished black, which you’ll see from the side window before you even unscrew the panel. The finish is a powder coat, which is bonded much more reliable than simple paint. Complementing the finish, the cables that are pre-installed in the chassis, such as the front I/O connectors, are sleeved. You may follow some of those cables back to find black PCBs installed around the motherboard tray. This pair of boards is situated next to the grommets, one with a four-pin molex and three-pin PMW fan connectors, and the other piggy-backing off the molex power with a three-pin connector. These allow the fans to be routed behind the motherboard tray and back in to be powered while showing the least amount of cable.

Speaking of grommets, there are four rubber ovals situated in a backwards-L : three that span the vertical length beside the hard drive and expansion bays, and one in approximately the middle of the motherboard tray, near the bottom.

On the inside, the power supply cutout is outlined with cushioning, and feet on four corners and the mesh discussed earlier to allow the power supply mounted in any direction, bottom out so the exhaust doesn’t blow into the case. A Velcro strap is included for a little extra security as well. The bottom the case continues on in open mesh form, as discussed with the exterior, room enough for an additional 120mm or support for extended power supplies. 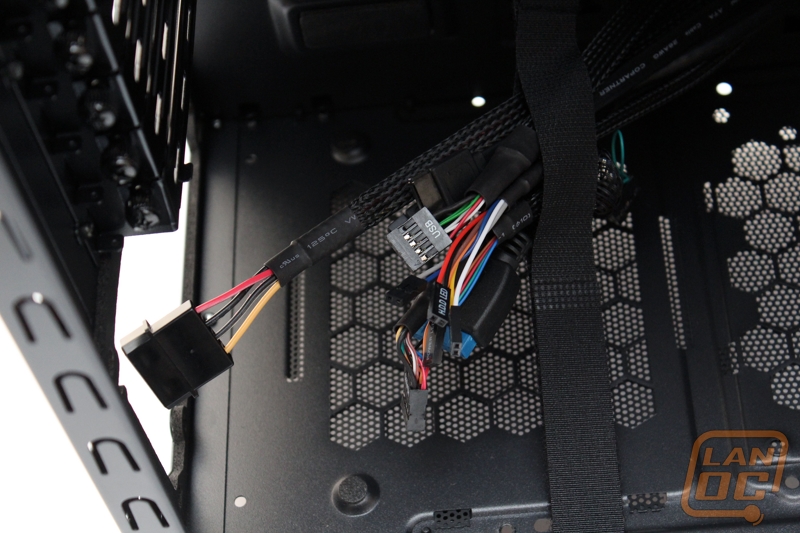 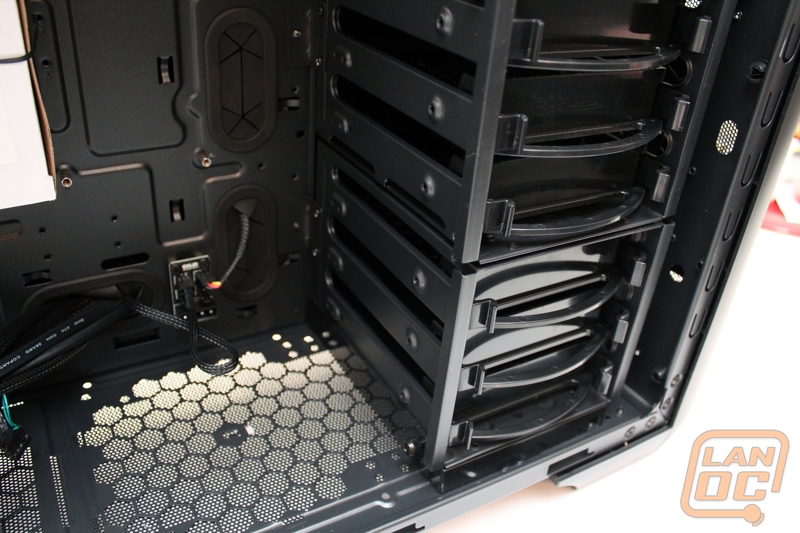 Layering the front of the case are two hard drive bays each with a capacity of three drives. These can be removed via two thumbscrews (side and rear) to help further suit the needs of extended hardware, such as video cards. With the bay removed, the DarkForce can be support a card up to 410mm in length. Though the trays operate on a tool-less design, in which the edges slide in rails and clip to secure (tabs are then depressed to release), the drives must be mounted using included screws. 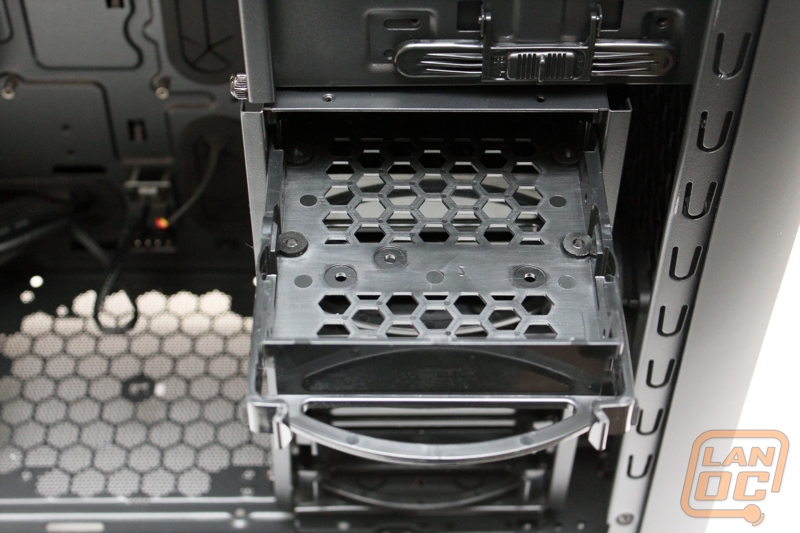 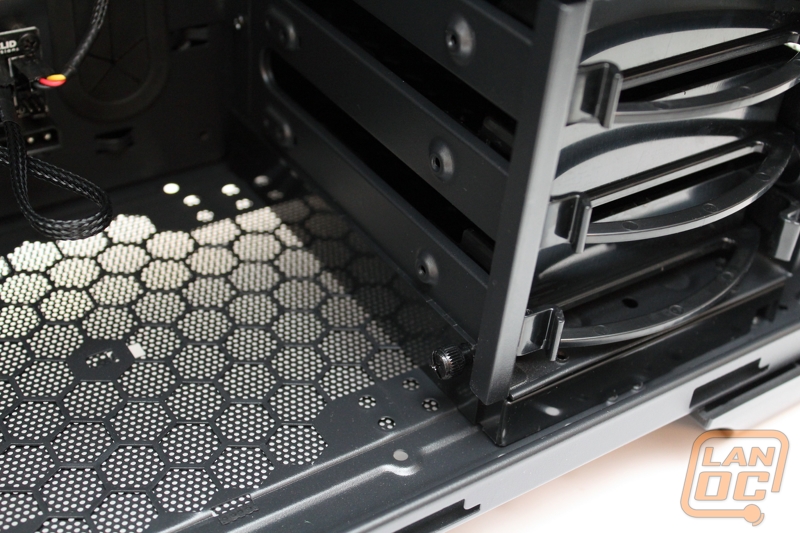 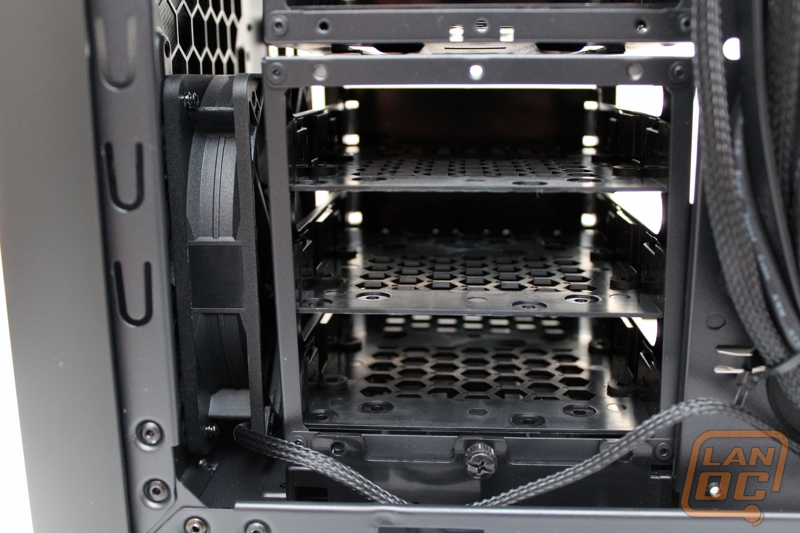 Atop the hard drive cages rest the optical drive bays, four in total, built for 5.25” devices but supporting 3.5” with the included converter. This system is entirely tool-less, using a small thumb switch moving from left to right and extending a bar that secures in the drives mounting hole. 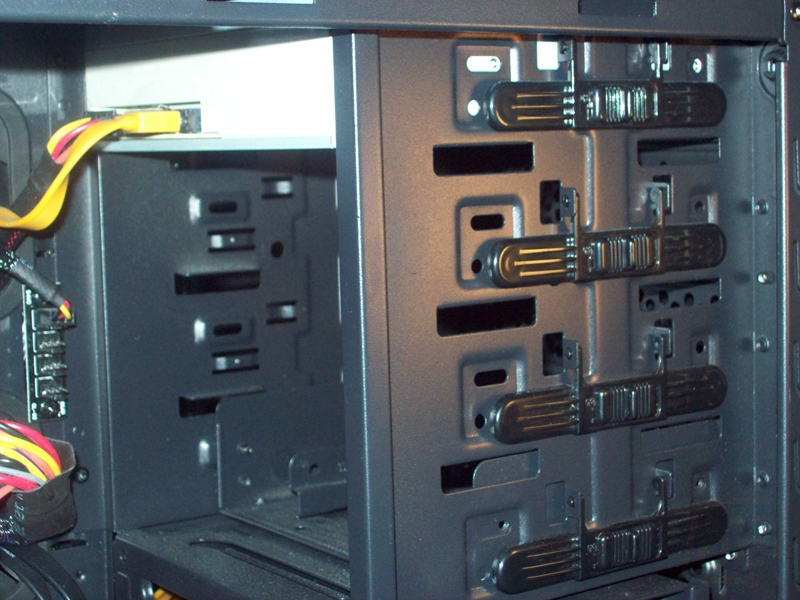 The top of the DarkForce is essentially a layer of mesh for dust control, but does support two 120mm fans should the need arise. 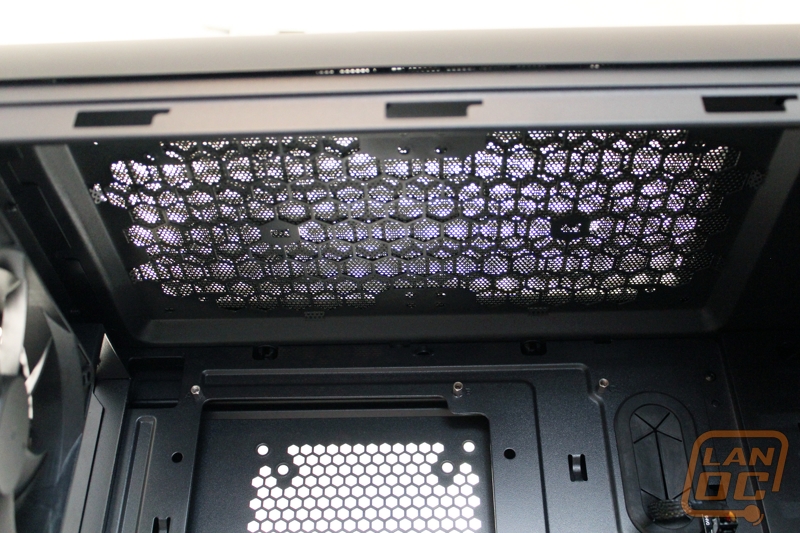